Last Wednesday the Similkameen Wineries Association hosted a fantastic dinner at Edible Canada on Granville Island. The dinner was preceded by an afternoon tasting of wines from all eight member wineries: Cerelia, Clos du Soleil, EauVivre, Forbidden Fruit, Orofino, Robin Ridge, Rustic Roots, and Seven Stones. Wineries were pouring their current vintages and some exciting new releases for Fall, including myriad fruit and dessert wines from Forbidden Fruit and Rustic Roots. One noticeable absentee from the event was Herder Vineyards, next door neighbours to Clos du Soleil. Having tasted their excellent wines I can say they were sorely missed: hopefully the Herders will fortify the Association with their membership soon. 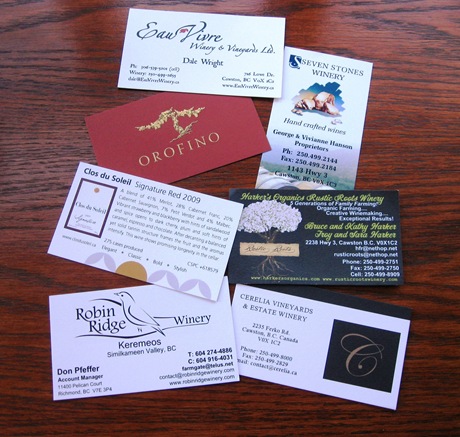 In the middle of the room John & Virginia Weber from Orofino Vineyards were pouring a couple of brand new reds. The 2009 Passion Pit Cabernet Sauvignon is a dark and ripe wine that clocks in at 14.9% alcohol. It is noticeably unfiltered – as are all of John’s reds – but that’s never a problem if the wine is made with care. The 2009 Syrah is an even darker colour, and just as rich, with a very promising future. The slightly reduced 14.5% alcohol is actually more noticeable in the Syrah due to its current tightness, but I’m really looking forward to trying it again mid-decade – Orofino recommends aging until 2013 at least. Both new wines sell for $29, which is a very respectable price point for small lot wines this well crafted. For even more information about Orofino check out their new blog, The Orofino Press; I’ve even heard a rumour that a Twitter account may be in the works!

At the Clos du Soleil table owner Spencer Massie was pouring his focused portfolio of Bordeaux-style whites and reds, while also showing off his new dessert wine “Saturn”, a Botrytis-affected late harvest Sauvignon Blanc. With low acid and lots of fresh fruit flavours it is a delicious treat, but the 50 cases made will probably disappear quite fast! Also newly released by Clos du Soleil is the 2009 Signature Red, their top tier Bordeaux blend – and this vintage includes all five Bordeaux varieties. Only 275 cases have been produced, but if you miss out you can always get one of the available magnums, double magnums, or 6L Imperial (i.e. “Methuselah”) bottles!

Standing behind an immense array of bottles in the corner of the room was Steve Venables, owner of Forbidden Fruit winery in the very south end of the Similkameen Valley. Steve and his wife Kim grow over 60 varieties of fruit on the banks of the Similkameen River, and have been doing so organically since 1977, several years before organic certification even existed! All that fruit yields more than a dozen table and dessert wines, including fortified and sparkling varieties, from both grapes and tree fruit. Steve was pouring most of those wines, including the dreamingly delicious Pomme Desirée Iced Apple Dessert Wine – Fruit Wine of the Year at the 2010 Canadian Wine Awards. I also tasted the rich flavours of plums and apricots in two of Steve’s “nectar wines” Plumiscious Plum Mistelle and Caught Apricot Mistelle: both are beautifully balanced expressions of pure fruit grown with care and years of experience. 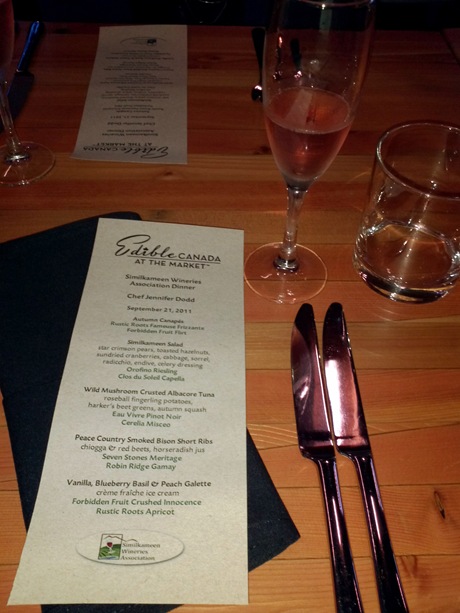 Joined by my wife, we later sat down to a five-course dinner paired with ten wines that included all eight Association wineries. Canapés were served with two crisp sparkling fruit wines: Rustic Roots’ “Fameuse Frizzanté” is made from Snow Apples and Santa Rosa Plums while Forbidden Fruit’s “Flirt” is all peaches made into a refreshing, dry Traditional Method Brut. The “Similkameen Salad” came next, featuring an array of freshly-picked produce (some that very morning) including star crimson pears, toasted hazelnuts, sundried cranberries, cabbage, sorel, radicchio, endive, and celery dressing. Orofino’s Riesling was served alongside Clos du Soleil’s Capella, which I found to a particularly good pairing. The heavy Sauvignon Blanc component in the Capella was not to my wife’s liking, but I enjoyed the balanced structure and soft, almost floral aromatics. 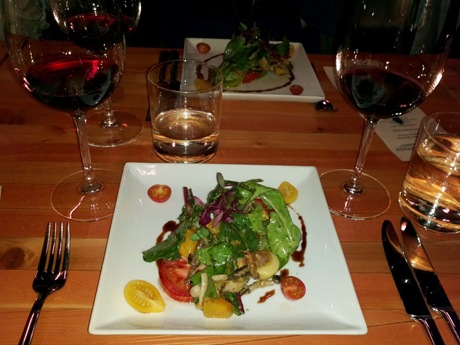 While most diners received a seafood course next featuring Albacore Tuna we were pleased that Edible Canada flexibly provided us with an expanded version of the tuna side dish of beet greens and autumn squash. Heirloom cherry tomatoes helped to accentuate the flavourful greens, while we enjoyed Eau Vivre Pinot Noir and Cerelia’s red blend “Misceo”. The Pinot Noir is a blend of Similkameen and Okanagan grapes, with tart strawberry flavours, while Misceo is a smooth, low acid Merlot-driven Meritage blend. 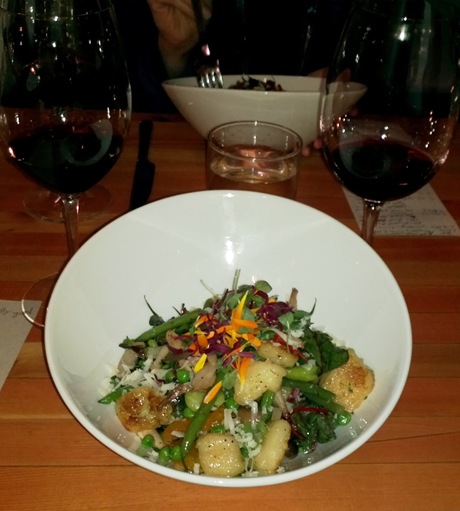 Our fourth course diverged substantially from the Bison Short Ribs and beets everyone else received to feature an original gnocchi and vegetable medley that we both adored. Peas, edamame, and green beans supported mushrooms, greens, and even some edible flower petals as we devoured the mouth-watering fresh gnocchi. The wine pairings for everyone included Robin Ridge Gamay and Seven Stones’ new 2008 Meritage. Robin Ridge retained the services of Master of Wine Rhys Pender for some detailed and very accurate tasting notes: I could really notice the ripe cherry and toasted almond aromas in the Gamay Noir. George Hanson’s newly released Meritage follows two highly award-winning vintages and has already received prominent praise for its juicy berry characteristics and long finish. 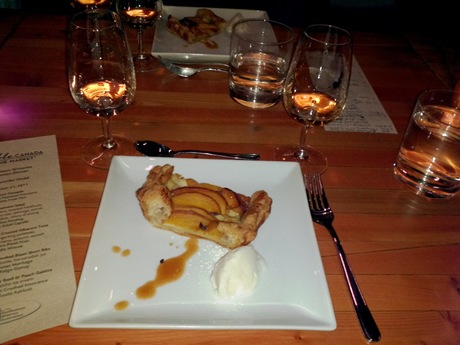 Both Forbidden Fruit and Rustic Roots received repeat consideration with the dessert course: vanilla, blueberry basil, and peach galette was served with crème fraîche ice cream. The lightly flavoured crispy galette was an ideal match for the rich but delicate wines, while the ice cream was almost dangerously delicious! Forbidden Fruit’s “Crushed Innocence” is a white peach dessert wine that is both pure and elegant, while Rustic Roots’ Apricot is made from three different varieties of organic apricots – equally refreshing and well suited to the final course of the meal. Both wines summarized nicely the excellent pairings, delicious food, and talented winemakers we celebrated that evening. Cheers to the Similkameen!

That was an exciting event with all the new releases you've mentioned from Forbidden Fruit and Rustic Roots. (http://www.winecellarrefrigerationsystems.com/wine-cabinet-cooling-units.aspx)