Bill Eggert, the one-man band that is Fairview Cellars, released his Fall wine selection last month. Spotting a tweet from Bill announcing the release (now that everything was finally bottled and labelled) I was quick to order a half-case so as to acquire a bottle of each new red wine. Good thing I acted fast, because two of the six wines (all from the 2009 vintage) are sold out already: Pinot Noir (60 cases) and Cabernet Sauvignon (160 cases) were gone in days. The four remaining wines still available consist of three delicious – and historically high-quality – blends, plus an additional “bonus” Cabernet Sauvignon called The Wrath. 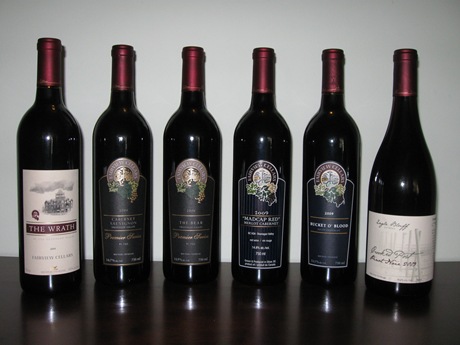 Owner and winemaker (and vineyard manager, and tasting room staff, etc.) Bill Eggert farms a small property just south of Oliver on the Golden Mile Bench. As John Schreiner details, Bill is a well-known character in the Southern Okanagan winery community; an easy-going man not afraid to speak his mind when he isn’t busy producing his legendary wines. I visited Bill’s property in August and got the chance to try some of the new wines before they were fully labelled (and so sadly couldn’t buy them in person). His tasting room is a log cabin that used to serve as his barrel room, and only held about a dozen barrels when it did (which no doubt seemed like plenty at the time). Fortunately Bill has had the opportunity to expand his holdings somewhat to increase the size and volume of his portfolio. The new Pinot Noir is an example of Bill’s branching out: the 2009 is only the second vintage, and all things being equal the Pinot will likely get even better in subsequent years as Bill gets to know his new vineyard source better.

On the flip side of the coin can be found Cabernet Sauvignon, which is Fairview Cellars’ bread & butter, and Bill’s favourite grape. Most of his vineyard is dedicated to Cab, which always seems to ripen wonderfully under his watchful and talented eye. Although the “regular” 2009 Cabernet is sold out, another version from a different vineyard is still available. This incredible wine – which yielded 250 cases – is named in part after the hail-storm that was thought to have devastated the grapes shortly before harvest. In fact, the damaged grapes dried out in the hot sun instead of rotting, and The Wrath was born. Icon Wines was able to taste barrel samples last year, and I tasted it both this summer and more recently at the Colour VQA Fall Release. My first impressions of the wine were amazement that it is only two years old – the incredibly smooth texture comes across as a well-aged wine with several years under its belt, not a brand new release! At $65 per bottle The Wrath won’t fly out the door as fast as some of Bill’s other wines, but don’t expect it to last too long, this unique wine is a collectable treasure. 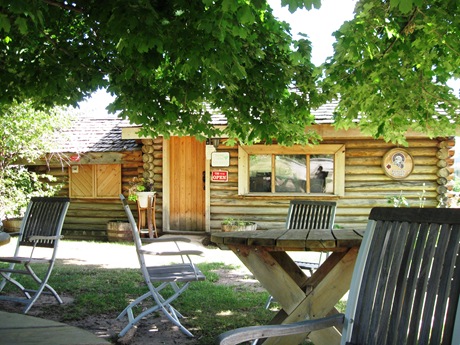 Although varietal Cabernet Sauvignon from Fairview Cellars can be sublime, Bill’s grapes shine as well when he uses Cab in blends. In the Spring Two Hoots is usually released, his entry-level Cab-Merlot blend, while the Fall release sees the arrival of Madcap Red, another under-$30 bottle that favours Merlot in an approachable blend for current consumption. Even better, with Merlot filling out the Madcap Red there is still plenty of Cabernet Sauvignon for use in another exciting blend called Bucket o’ Blood. Named after a nearby historical saloon, this wine is where Bill uses his single row of Syrah to produce a  Cab-Syrah blend that shows off the spicy pepper characteristics of one of my favourite grapes.

The final blend to be released this Fall is one of the highpoints of Fairview Cellars’ portfolio, the delightfully-named flagship wine The Bear. This complex blend typically includes all five traditional Bordeaux grapes, with Cabernet Sauvignon leading the way. Luckily Bill usually produces a few hundred cases, and now that Fairview Cellars has joined the BC Wine Institute you can find it in VQA stores in addition to private wine stores. Icon Wines has provided detailed and very positive reviews of both the 2007 and 2008 Bears over the past year, but feels that the 400 case-lot 2009 version is even better: “the best Bear since 2005.” Despite praise from many corners and restaurant wine list appearances throughout Vancouver Bill sells The Bear for a very reasonable $35, making collecting and cellaring a very viable and rewarding proposition. In fact, it is one of the few signature BC red blends that I collect without question, and I now hold a cherished 2006-2009 vertical. Considering there is still some 2008 in stores you could be halfway there in no time should you start collecting soon – you won’t be disappointed!