The rapid rise of Painted Rock Winery continues as awards continue to roll in and the newest – and perhaps best ever – wines are now becoming available. The Fall release party at Gotham Steakhouse last week provided the opportunity for proprietor John Skinner to show off his new wines, and his new medals. For this summer’s Canadian Wine Awards competition John entered thirteen different wines from multiple vintages, and was awarded medals for all of them! Most exciting were the three Gold medals, for the 2009 Red Icon, and 2008 Cabernet Sauvignon and 2008 Syrah. The awards coincide with good and bad news for fans, as the 2008 Cabernet is long sold out, but the Syrah remains available while John waits to release the 2009 vintage. As for the Red Icon, the news is very good, because production is substantially higher for 2009 than in the past, and there should be a large number of bottles – and statuesque magnums – available throughout BC this fall. 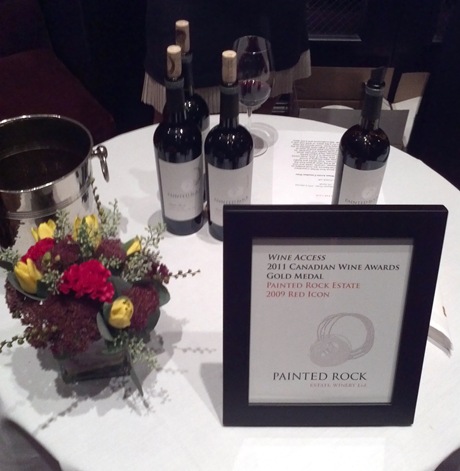 The new Red Icon is a spectacularly smooth and juicy wine very deserving of that Gold medal. Interestingly the Malbec was omitted for 2009 and a tiny bit of Syrah added instead, to provide a special spark to the Merlot, Cabernet Franc, Cabernet Sauvignon, and Petit Verdot. Fortunately plenty of Syrah remained for the single varietal bottling, which will likely prove to be an excellent follow-up to the delicious 2008 version. The current (Gold medal) Syrah is a ripe, peppery wine with prevalent oak notes at present; Anthony Gismondi feels that “time in the bottle will help this wine reach its full potential.”

On the Cabernet Sauvignon front it seems clear that those desiring a taste should continue to seek out restaurant wine lists, for the 2009 vintage sold out in minutes! Ever since that first Lt. Governor’s Award for the initial 2007 vintage John has seen BC’s finer restaurants snap up his Cabernet Sauvignon with rapidity. It certainly didn’t help that production was quite low for 2009, and after contributing to the Red Icon little remained for single varietal bottlings. It’s unfortunate that collectors may be stymied as the samples being poured at Gotham showed off the rich and powerful characteristics of this wine; equally smooth as the Red Icon, it appears that 2009 was a very good vintage indeed.

Two more new releases include the final red wine – 2009 Merlot – and Painted Rock’s sole white wine. The 2010 Chardonnay is bright and juicy with a lot of tropical flavours. The release party was my third opportunity to try it, and each time I have thoroughly enjoyed the creamy texture and layered flavour profile. The newly released Merlot shares many characteristics with the other 2009 reds, with dark fruit and smooth textures: the winery’s tasting notes describe it as “serious, complex, and sturdy.” Like most Painted Rock wines, both Chardonnay and Merlot should be particularly enjoyable with foods that will both complement, and compliment them.