It was with great pleasure that I received my second Platinum Club shipment last month, after having joined earlier this year. While the Spring 2011 shipment focused on the newly released aromatic whites, the Fall shipment included a selection of harvest-friendly wines, with a greater focus on the reserve Platinum bottles. (The upcoming February 2012 shipment should include most of the Platinum Reds.) CedarCreek tried something new with this shipment: they added a live online wine tasting with President Gordon Fitzpatrick and Winemaker Darryl Brooker on September 29. I unfortunately had to miss the tasting due to a prior commitment. However I was pleased to see that the session was recorded and linked to on CedarCreek’s Facebook page, and I enjoyed watching it later to learn some of the inside information about the wines and the winery. 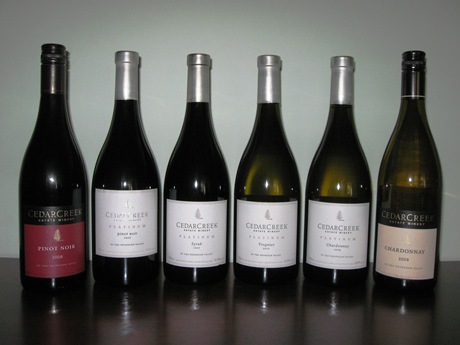 The Fall club shipment struck me as a bit of an ode to Burgundy, containing a pair of Pinot Noirs, and another pair of Chardonnays. Both Pinot Noirs are about a year old, if you consider their birthdate to be their initial release last September, but the extra year of bottle age likely helps them along. The 2008 Pinot Noir comes from the regular estate tier, while the next model up is the Platinum 2007 version. Both wines received Bronze medals at the 2010 Canadian Wine Awards, but diverge from there: the 2008 picked up Gold at the BC Wine Awards in Fall 2010, while the Platinum 2007 was awarded Best of Category at the 2010 All Canadian Wine Championships. The consensus seems to be that these are more “feminine” Pinot Noirs, as John Schreiner details. Anthony Gismondi puts it another way in describing both the 2007 and 2008 as relatively lean and tart, with the 2007 showing just a bit better. For the record both wines contain total acid of a bit less than 8 grams per litre.

The Chardonnays represent a similar pair, albeit with vintage reversed: in this case the newer 2009 wine comes from the Platinum tier, while the older bottle is from the estate tier. The new Platinum wine is not yet detailed on the CedarCreek website, but the release notes describe a barrel fermented wine aged for 11 months on the lees, having received the full French oak treatment. CedarCreek entered a number of wines into the 2011 Canadian Wine Awards and received a bronze medal and a strong review for this cellar-friendly wine. Only about 500 cases were made, down from nearly 800 in the 2008 vintage, and while the official release date is listed as July 2011, I think it is unlikely to show up in stores until later this Fall or even next year. The estate tier 2008 Chardonnay on the other hand should be widely available and ready for immediate consumption at this point, having been initially released at the winery almost two years ago. I’m confident it still retains the fruit forward and food friendly approach that both Anthony Gismondi and John Schreiner described this spring, and a secure screwtop alongside a very competitive price point of $18 makes for an easy choice.

The remaining two wines in the shipment come from CedarCreek’s southern vineyard holdings near Osoyoos, prime territory for growing deliciously ripe Syrah and Viognier. The results have led to beautiful bottles of 2007 Platinum Syrah and a new 2010 Platinum Viognier. The Syrah represented a new chapter when it was released in late 2009 as CedarCreek’s first Platinum Syrah, aged for 15 months in premium French oak: “that’s why the wine smells so classy” according to John Schreiner. Had everything gone according to plan these two wines may have shared a common destiny, as a Syrah-Viognier blend was originally anticipated. However, the Viognier grapes were so good on their own that CedarCreek decided this year to bottle a limited production run of single-varietal wine from just two barrels (636 bottles to be precise). The wine was earmarked exclusively for Platinum Club members, with any remainder to be sold at the winery store. The notes detail the gentle six hour pressing and subsequent neutral-barrel fermentation, followed by 4 months of barrel aging on lees. One can imagine the rich, creamy mouthfeel on this wine and I’m looking forward to enjoying my bottle on a special occasion soon: the winery suggests pairing it with sushi uramaki such as a luxurious Dynamite Roll – thanks for the suggestion!