Last weekend’s wine club dinner included some reliable favourites, plus a couple of relatively unfamiliar wines with which none of us had much experience. Once again our great local food and drink provided for another delightfully entertaining and informative tasting experience. 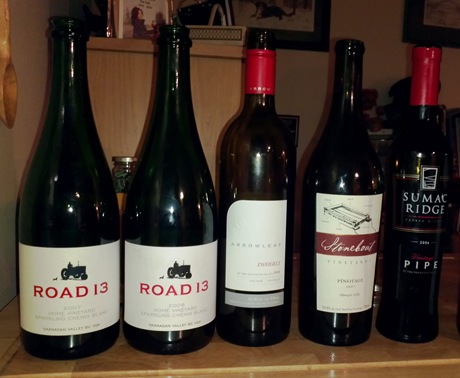 Our food and wine pairings have become increasingly mysterious as each couple seeks to hint at their choices yet ensure a pleasant surprise for the rest of us. This strategy of secrecy wasn’t in the original club “charter” but it has certainly upped the ante of culinary adventure. All we knew about the appetizer in advance was that a test-run had been desired to “test the structural integrity” – an intriguing statement that provoked a great deal of curiosity in the weeks beforehand. While the food was prepared with great care in the kitchen, a pair of familiar smile-inducing bottles were pulled out: Road 13 Sparkling Chenin Blanc – two vintages! We were treated to last year’s 2007 and the most recent 2008 sparkler thanks to our generous appetizer chefs. Beyond those delicious and award-winning wines we were even more awed when a beautiful vegetarian terrine was revealed. A veritable layered vegetable garden supported by fig goat’s cheese stood before us: zucchini, carrots, English peas, collard greens, eggplant, asparagus, tomatoes, and yellow zucchini showed off the rainbow of the late-summer harvest. Of course this variety of flavours and textures had led the appetizer team to muse about a proper wine pairing, but it was soon deemed that “sparkling goes with everything,” and so Road 13’s flavourful offering fit the bill perfectly. 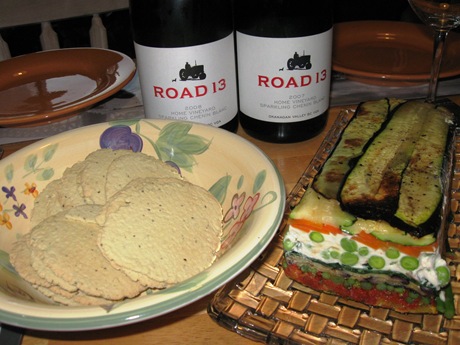 Having two vintages of sparkling wine to compare was a unique and valuable opportunity, and quite clearly demonstrated the effects of both vintage variation and simple aging. The 2007 Sparkling Chenin was the more yeasty of the two wines, with bready, apple-centered aromas and smooth, delicate bubbles. The more recent 2008 showed much less yeast and significantly greater citrus and tropical fruit flavours. With an additional year of aging the deeper baked apple characteristics may become more dominant, but we enjoyed the freshness all the same. It wouldn’t be fair to pick one wine over the other as each had unique aspects that were preferred by some: my favourite was the yeasty 2007 but there was much love for the fresh 2008. Both wines possessed sufficient acidity and complexity to suit the terrine, and both bottles and the first course disappeared in short order.

The entree course was even more of a mystery as no hints had been delivered in advance, so we mused about sparkling Chenin and tried to steal glances into the kitchen while we waited. Our patience was soon rewarded with the fresh smells and beautiful bright colours of heirloom tomato soup topped with fresh basil, served alongside gourmet grilled cheese sandwiches and a crisp side salad. Our host explained the challenge he had posed to staff at Village VQA Wines in Kitsilano when seeking pairing advice: the wine needed to mesh with the gruyere and gouda in the sandwiches whilst standing up to the acidity of the soup. Fortunately the perfect match was suggested in the form of Arrowleaf Zweigelt (2008) from the north Okanagan. Most of us were fairly unfamiliar with Zweigelt, which the winery mentions is a cross between Blaufrankisch and St. Laurent grapes, and named after its Austrian creator. Smooth tannins and sufficient acidity made for an excellent food pairing, as the wine possesses a lot of fruit up front but is not too sweet on the palate. There was a very good balance of fruity elements and spicy characteristics, and in our case everyone was quite pleased to enjoy something new with the delicious meal. 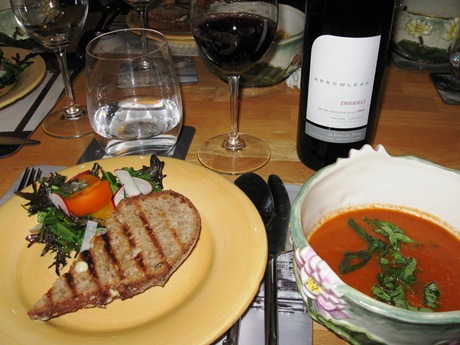 Dessert was my opportunity to open a bottle I’ve been holding for a while in the hopes of the right pairing. After Black Sage Bench winery Stoneboat won a second Lt. Governor’s Award for their 2007 Pinotage I acquired a bottle without any particular plans for it, but was later inspired by the tasting notes that describe aromas of spiced plums and chocolate. I soon found a recipe for Plum, hazelnut, & chocolate cake but needed the right opportunity: with the dessert course responsibilities rotating amongst us I had to wait for plums to be in season at the same time! Finally I got lucky this month as beautiful organic plums from BC’s Similkameen valley were prevalent in stores.

Loaded with fresh plums and brushed with red-currant jelly, the cake was a runaway success, but how can you go wrong with that much butter, sugar, and eggs, plus hazelnuts and chocolate. The wine was more of a question mark unfortunately. Pinotage is a cross between Pinot Noir and Cinsault, and in fact, Zweigelt and Pinotage were both first bred in the early 1920’s. Similar to the Zweigelt, we had so little experience with Pinotage there was some uncertainly about spoilage when we opened the bottle. It remains likely that the initial wet cardboard notes reflected a bit of cork taint, but after time in the glass it opened up and became fruitier. Having recently tasted Stoneboat’s 2009 Pinotage – with lots of red fruit and spice – I can’t say that the 2007 measured up to its potential, but that certainly didn’t stop us from finishing the bottle without any hard feelings towards the winery. 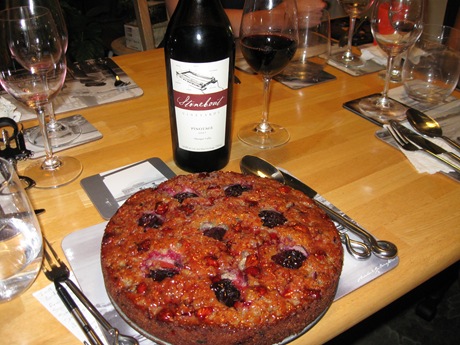 Having acquired plenty of plums, chocolate, and hazelnuts for the cake, I decided a bottle of Sumac Ridge Pipe would make for an excellent final course. Pipe is a dependable Port-style fortified Meritage that suits a variety of dessert courses; in this case some Blue Benedictin and Stilton rounded out the after-dinner selection as the evening wound down. With two new wines under our belts and another evening of enjoyment the adventure in BC wine continues!