Early this month the BC Wine Appreciation Society was pleased to welcome Blue Mountain Vineyard for a tasting led by Winemaker Matt Mavety. This premiere event was another one for the society record books: in fact the winery graciously found another bottle of each in order to facilitate expanding the guest list when the event sold out quickly and hit the attendance cap!

The Mavety family have farmed their Okanagan Falls vineyards for more than forty years, and have operated their own winery for two decades under the leadership of Ian and Jane Mavety. We were very lucky to have their son Matt present to tell us about his experiences in the vineyard and cellar since he started working full-time at Blue Mountain in 1997.

Matt brought with him some of Blue Mountain’s celebrated “Stripe Label” Reserve wines, and the ultra-rare (and mostly sold out) brand new vintage sparkling wines. The new Blanc de Blancs and Reserve Brut complement the existing non-vintage “Gold Label” Brut, and vintage Brut Rosé. Those of us who had read John Schreiner’s blog post last fall were no doubt very eager to try the new wines, in addition to the rest of Matt’s consistently well-crafted portfolio. 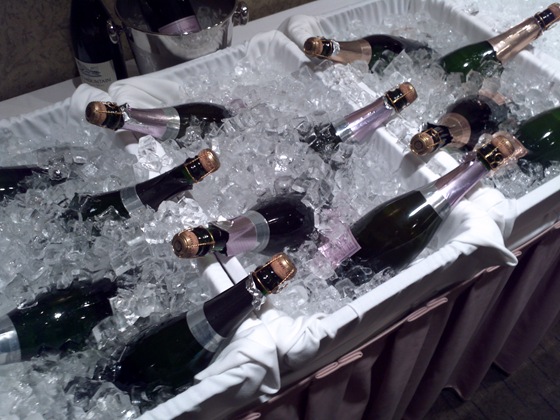 After Matt had a chance to introduce himself and his wines everyone received a freshly-poured glass of non-vintage Brut to begin the tasting. Like all of Blue Mountain’s sparkling wine, the NV Brut has a fine mousse and crisp orchard fruit flavours. I also tasted hints of brioche and tropical fruit – led by pineapple. A little bit of citrus finished the wine off nice and cleanly, showing why it is such a popular choice locally, and can be found in many private stores across BC.

Next up was the new Blanc de Blancs, the first release of this traditional method sparkling Chardonnay, and coming to us from the 2006 vintage. This wine spent five years aging sur-lie in bottle before disgorgement last March! More orchard fruit was prevalent, led by apples, as well as a bit of yeasty nuttiness. I smelled and tasted some pleasant light vanilla notes as well.

Following the Blanc de Blancs was the second new sparkling wine, a 2005 Reserve Brut. Six years of aging in bottle sur-lie helped this blend of 60% Pinot Noir, 35% Chardonnay, and 5% Pinot Gris achieve delightful complexity and richness. The wine’s colour was slightly darker than the Blanc de Blancs, with further hints of vanilla and caramel, ripe apples and pears, and a round mouthfeel and long finish. Society President Brian Glaum recently tasted through a selection of renowned Champagnes at a private tasting, and remarked out loud that this wine was as good as any of them, at half the price (it being $40 before it sold out).

Served fresh and crisp was our final sparkling wine, the Brut Rosé, the newest release from the 2008 vintage. Blue Mountain’s Brut Rosé is a nearly identical blend as the Reserve Brut, but with the addition of several percentage points of Pinot Noir after fermentation to provide that soft pink colour (as opposed to gaining the colour via skin contact during pressing). The wine showed off a perfumed nose with a relatively dry palate and flavours of strawberry, cranberry, and pink grapefruit. Unlike the Reserve Brut the Rosé is actually still available for sale at the winery, but probably not for much longer!

Each autumn going forward Blue Mountain will be making available new releases of the three vintage sparkling wines, with the goal of producing about 2,500 bottles of each annually. The several hundred cases of vintage sparkling wines thus represent a very small percentage of the winery’s 16,000 case annual production, but no doubt take up a more substantial percentage of the workload for Matt and his team! 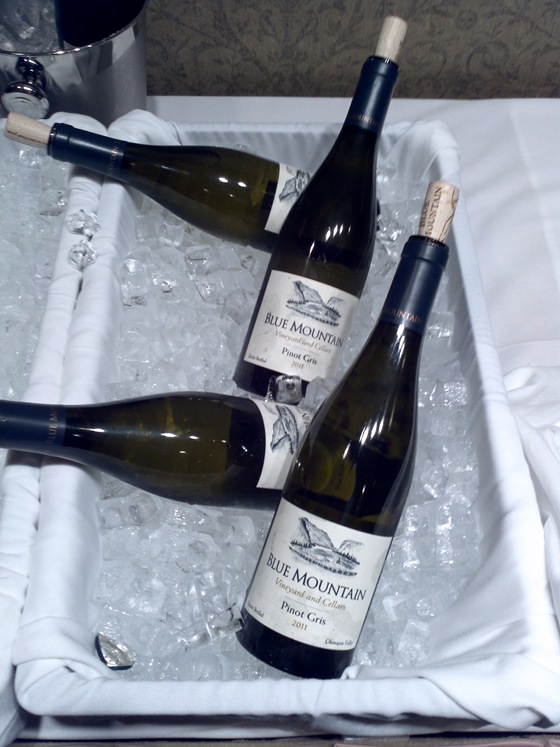 With memories of fizzy bubbles dancing in our heads we collectively moved on to the remaining wines, consisting of “Cream Label” and “Stripe Label” versions of Blue Mountain’s Pinot Gris, Chardonnay, and Pinot Noir. For each wine we had the opportunity to taste the 2011 vintage of the Cream Label, and the upcoming release of the 2010 vintage of the Stripe Label Reserve wines. The May release of the new Stripe Label wines will undoubtedly see them sell out quickly once again, likely starting with the popular Pinot Noir.

I have to admit I found it challenging to distinguish between the two Pinot Gris in particular, as both possessed a citrus nose and broad flavours of orchard and stone fruit, however the Reserve wine struck me as having a slightly creamier texture. When it came to the Chardonnays, both wines showed off well-integrated oak and clean citrus flavours, but weren’t in the highly creamy, buttery style of some Chardonnay. Flavours of apples, peaches, and pears were present along with light lees character, and altogether I liked the fuller Reserve version quite a bit more: it seemed simultaneously sweeter and more acidic, with both characteristics in superb balance.

By this point the Pinot Noir in our glasses had enjoyed some valuable breathing time, and both wines were delectably ready to taste. The 2011 Cream Label Pinot was somewhat smoky on the nose, with plenty of red fruit flavours and earthy notes. Matt suggested it would see a shorter lifespan than the Reserve due to its reduced acidity. It was that Reserve Pinot that particularly blew me away, with so much ripe fruit wafting effortlessly from the glass, and a darker colour being reflected in the palate as well. The long finish, firm tannin structure, and obvious complexity make this wine a great candidate for further aging. Sadly only 400 cases of 2010 Reserve Pinot Noir were produced, as opposed to the usual 800 cases in most other years!

Fortunately fans seeking to get their hands on these small lot wines, and the very hard-to-come-by Sparklers, can now take advantage of the new Blue Mountain Priority Group, which Matt was happy to explain to the crowd. The principle of the Priority Group is along the lines of a wine club, but one in which the customer has full control: you tell the winery which bottles you’d like each year, and as they are released the winery sets aside your allotment until all are available (for pickup or shipping). I recently joined and am looking forward to receiving my first mixed case in November once the sparkling wines are released.

With more than a few order sheets and Priority Group sign-ups on the table in front of him Matt was kept busy as we closed out the evening. Everyone was clearly very glad to have had the chance to try his wines, and we all left grateful for the opportunity to meet yet another talented local winemaker, and savour the fruits of a legendary BC winery.