Last week was the annual Vancouver International Wine Festival, this year celebrating its 35th edition with a tribute to California wines reminiscent of those first few years when the Festival was comprised exclusively of California wines. With California as the Theme Region, this year’s Global Focus on Chardonnay was an excellent fit. Sixty-two California wineries visited Vancouver, along with 113 additional wineries from a total of fifteen countries. I was very fortunate to be able to attend the Festival’s International Tasting Room a total of four times, including both afternoon Trade Tasting sessions. During my visits I sampled nearly all of the BC wines from the twenty-seven wineries present, and greatly enjoyed my many discussions with the proprietors, winemakers, and passionate staff who were present.

The first thing I did upon arriving at the Tasting Room however was visit the on-site BC Liquor Store to purchase a few bottles I knew I wanted in advance. I was certain to get Sandhill’s 2010 Small Lots “One” red blend ($35), which doesn’t always show up in stores, and of which only 525 cases were produced (still more than the 225 cases produced of the 2009 vintage though). I always make sure to pick up Nk’Mip’s relatively new icon red blend, Mer’r’iym ($50), of which the 2010 vintage was available (and not yet released at the winery). Lastly, I bought each of Quails’ Gate’s Stewart Family Reserve 2011 Chardonnay ($35) and Pinot Noir ($45) – both always dependable and quick to sell out (only about 500 cases of Chardonnay and 1,000 of Pinot Noir were produced). I left it up to the Tasting Room to determine if anything else tickled my fancy enough to justify an impulse purchase.

In the Tasting Room I proceeded first through the wineries of British Columbia before exploring internationally. There were quite a few new BC wines being poured – along with some current favourites – and I took note of many personal highlights. I tried a new strategy this year of tasting exclusively white wines the first afternoon, with reds to follow the next day. The advantage of such a plan being that one’s palate doesn’t get burnt out by tannins too early in the Festival! It worked out well, and enabled me to concentrate a bit more on the intricacies of the more delicate whites being poured.

At the CedarCreek table President Gordon Fitzpatrick was present alongside Winemaker Darryl Brooker, pouring the upcoming 2012 Riesling ($18) among other things. The new Riesling maintains Darryl’s focus on fresh, brisk acidity and lime flavours, but clocks in at an amazingly low 9.9% alcohol! The 2011 Platinum Chardonnay ($30) was naturally present, to coincide with the Global Focus, and showed a bright, refreshing palate due to a complete absence of malolactic fermentation. The 2010 Platinum Pinot Noir ($40) showed off a youthful, fruit forward presence, and is in fact quickly becoming a favourite of local critic Anthony Gismondi, shown by his recent 90 point review. Also being poured was Darryl’s brand new 2010 Shiraz Cabernet ($23), which I just received recently in my Platinum Club shipment: it’s juicy, plush, and soft – easily enjoyable! Best of all, the Shiraz Cabernet uses Cabernet Franc for the (22%) “Cabernet” part of the blend, taking advantage of Franc’s compatibility with our local climate and terroir.

Down at the Fort Berens table owner Rolf de Bruin was showing off one of the other few 2012 vintage wines I came across. One disadvantage to holding the Festival so early in the year is that many wineries haven’t yet bottled their most recent vintage, so one tends to miss out on the newest whites and rosés, apart from the odd tank sample. However, Rolf must have pulled out all the stops, as his 2012 Riesling ($18) is fully bottled and already in stores! It is a delightfully fresh, tropical take on Riesling that is in fact reminiscent of an Ehrenfelser, with well-balanced acidity and none of the traditional diesel notes often associated with the variety: “a study in Lillooet’s terroir” in his words. I was sure to bring back my wife and several friends later in the festival to taste it again, to much acclaim! 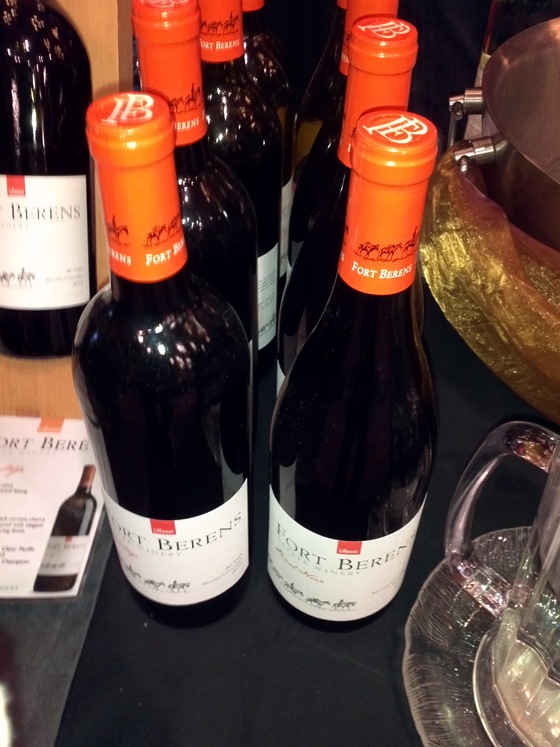 Close by at the Meyer Family Vineyards table JAK Meyer and his wife Janice were aglow with pride at a recent major feature in the Vancouver Sun, detailing their fondness for Chardonnay. In appropriate form JAK was pouring both of his 2011 vineyard-specific Chardonnays. The McLean Creek Road Chardonnay ($35) comes from the Okanagan Falls home vineyard, and was showing very well-integrated oak and lots of apple-dominant primary fruit at present: delicious at such a young age! The Tribute Series Chardonnay ($35), from the winery’s Old Main Road vineyard in Naramata, received exactly the same oak treatment but exhibited distinctly more pronounced oak expression – a fascinating study in vineyard variances. Also present were the winery’s varietal 2011 Pinot Noir ($25) and Gewurztraminer ($18), with the former showing hints of smoke and bacon fat, and the later being a delightfully fruit-focused wine that dials back the excessive perfume often witnessed in the varietal. 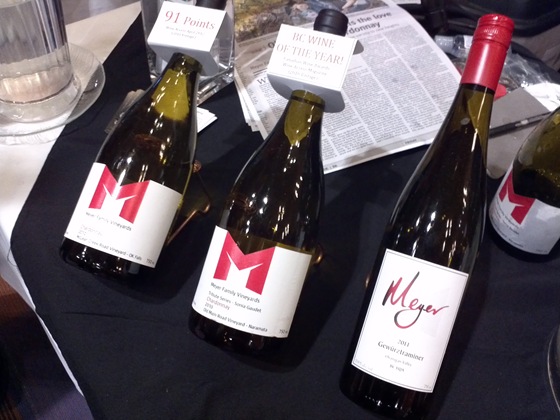 Young Penticton winery Perseus, with the help of consulting Winemaker Tom DiBello, was pouring a nice selection of well-priced red wines in addition to a quality Pinot Gris from their home vineyard in Penticton. Nearly all the reds come from the Similkameen Valley’s Blind Creek Vineyard, with additional Syrah coming from a vineyard overlooking Skaha Lake. Starting at $20, the 2011 Cabernet Shiraz is already widely available and shows juicy fruit and youthful tannins. The 2011 Merlot ($22) was surprisingly approachable at such a young age, due to very well integrated oak and plenty of berry fruit. The smooth and smoky 2010 Tempus Syrah ($29) includes a touch of Viognier, responsible for the gorgeous colour I admired. Even the winery’s top red blend, “Invictus” comes in at only $33, and the new 2010 vintage was rich with aromas of leather, earth, and dark fruit, plus a very full texture on the palate.

Next door, at Poplar Grove, Winemaker Stefan Arnason was present alongside Sales Director Laurie Barnes. With the winery having a relatively compact and focused portfolio of wines, nearly the entire range was being sampled at the Festival, including the flagship 2007 red blend “The Legacy” ($50). Naturally, the winery’s 2010 Chardonnay ($22) was present, with a well-balanced, soft palate and minimal use of oak (17%). The 2009 Cabernet Franc ($35) that was being poured is actually sold out at the winery after having received a Lieutenant Governor’s Award last year, so Festival patrons were very lucky to have the chance to taste it and buy it on site. The Poplar Grove Cab Franc is an elegant take on the varietal, with approachable tannins that will likely age quite nicely, as most previous vintages have done. The 2009 Syrah ($35) was also available at the Trade Tastings, drinking well at present with lots of bright fruit on the palate.

At the Road 13 table owners Mick & Pam Luckhurst and their son Joe were all out in force, while Winemaker J.M. Bouchard was shepherding a couple valuable barrel samples. At the Trade Tasting there was a sample of the upcoming 2012 Old Vines Chenin Blanc ($24), one of Road 13’s most renowned wines year after year (along with the sparkling version of the same). I enjoyed the honeyed palate with hints of melon and what I interpreted as popcorn – entertaining! Particularly special was a single sample bottle of 2011 Jackpot Petit Verdot, from the Blind Creek Vineyard in the Similkameen. J.M. could not stop praising this vineyard site, and the wine itself (to be released next year in all likelihood) was fantastically exciting. Similarly rich and expressive was the currently available 2011 Syrah Mourvedre ($35), with plenty of dark cherry flavours that made me long for another taste, and very glad I had a bottle back home!

There were quite a few more great wines to taste at the Festival, and later this week I’ll cover additional highlights from BC wineries!