After three visits to the Wine Festival Tasting Room I had the opportunity to attend the BC Paired Luncheon the following day. Most of the BC wineries present for the Festival were at Provence Marinaside pouring selected wines as part of a grazing-style lunch organized by the BC Wine Institute. I discovered a few more gems, and tried some wines not present in the regular Tasting Room, alongside the delicious food of Chefs Jean-Francis & Alessandra Quaglia.

The menu was extensive, and reflected the seafood focus of Marinaside, with popular offerings such as Sockeye Gravlax, Dungeness Crab Cakes, Lobster Risotto Balls, and Seared Scallops with Truffle Beurre Blanc. Sawmill Bay oysters were on hand to pair with the sparkling wines in the room, and outside on the patio lamb lollipops and sausages were being grilled for those interested in an ideal red wine pairing. Fresh Tomato & Bocconcini Skewers, Tomato Basil Gnocchi, and some well stocked cheese trays were enough to keep strict vegetarians quite happy, while addictive lemon and chocolate tarts were in abundance to finish the meal. I attended a similar event at Provence during last year’s Festival and have to say the preparation and organization were noticeably improved this year, helped along by the additional space provided for in the restaurant’s new Wine Bar.

Having adored Rolf de Bruin’s 2012 Riesling so much in the Tasting Room I headed directly to the Fort Berens table to see what he was pouring alongside Winemaker James Cambridge. I was excited to see some new 2012 Pinot Noir Rosé, and marvelled at the gorgeous violet colour of the wine, which seemed to almost glow in the light. I resolved to pick up a bottle on the way home upon appreciating the delicate strawberry and pink grapefruit aromas and the dry palate with hints of earthiness. Rolf’s fruit-forward 2011 Chardonnay was further icing on the cake, with tropical flavours and nicely integrated oak – a great preview of the potential to be found in the winery’s reserve Chardonnay “White Gold” coming out in April. 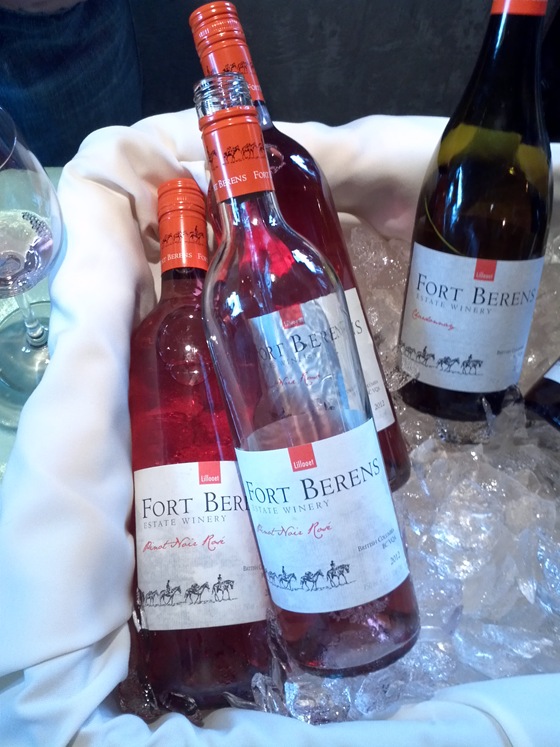 A significantly different shift in Chardonnay style could be experienced steps away at the Sandhill table, where the 2011 Small Lots Chardonnay finally made an appearance, having been surprisingly absent from the Festival Tasting Room. The winery yields a full-bodied Chardonnay from selected parcels of their estate vineyard for this wine, of which typically only several barrels are produced. A very creamy texture and slightly sweet palate loaded with pie crust flavours provided for a memorable wine that I hope to enjoy again with something particularly well-paired, like baked Brie.

Across the room Okanagan Falls winery Noble Ridge was represented by Manager Tamsin Finnigan. The winery’s traditional method sparkling wine “The One” ($40) really caught my attention in the Festival Tasting Room, and I was quite pleased to enjoy it again at Provence. Made from Pinot Noir and Chardonnay grapes, it continued to remind me specifically of fresh waffles and strawberries. Sadly the wine wasn’t for sale at the Festival’s Convention Centre BC Liquor Store, but I resolved to seek some out in short order after hearing from Tamsin that it should be available at private stores, including Legacy and Firefly.

Another two wineries were also pouring their sparkling wines to cleanse and refresh our palates. See Ya Later Ranch had their venerable non-vintage Brut, which is consistently enjoyable and relatively widely available as well. Produced via the Traditional Method it has pleasant baked bread aromas and a clean, crisp finish that I’ve enjoyed on many occasions. The other sparkling was the new Blanc de Noir Brut from Langley winery Backyard Vineyards: a good value at only $20 from Fraser Valley Pinot Noir, it was showing plenty of fruit, and lots of versatility with the myriad foods present. 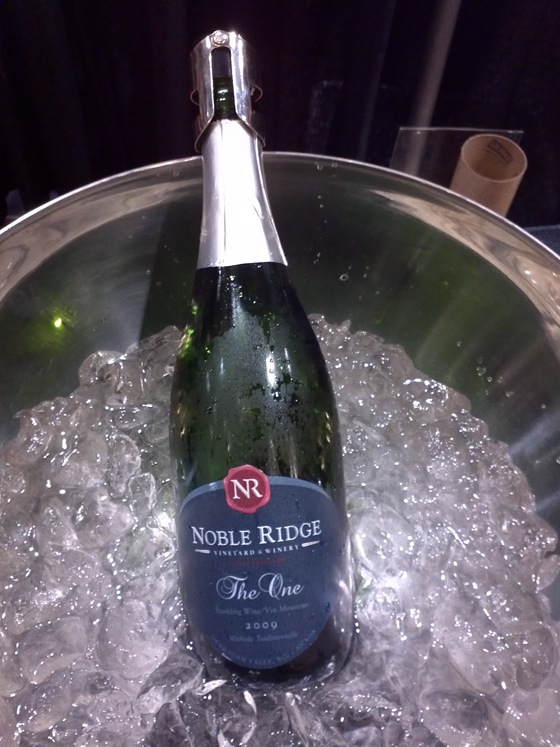 Plenty of delicious red wine was also on offer despite the seafood-heavy menu, including the rare “CSM” blend from Poplar Grove. I was lucky enough to find the 2008 vintage last year, and am hopeful to get my hands on some of the smooth, juicy 2009 becoming available this year, despite it being targeted primarily at the winery’s Club members. About six hundred cases were produced, so there should be enough to stock the winery’s tasting room for a least a few months.

At the Nk’Mip Cellars table I continued my discussion with Assistant Winemaker Justin Hall as I sampled the 2009 Qwam Qwmt Meritage. I was sure to compliment him on the wine’s surprisingly bright, fresh red fruit flavours, and I mentioned the noticeable Merlot component obvious on the nose – Justin confirmed it’s often about two thirds Merlot. Even more 2009 reds could be found just inside the patio doors, where Black Hills Winemaker Graham Pierce was generously pouring ripe 2009 Nota Bene. The 2010 vintage is the current release (with the 2011 coming out in June), but the relatively young 2009 is already drinking quite well with plenty of dark fruit flavours. 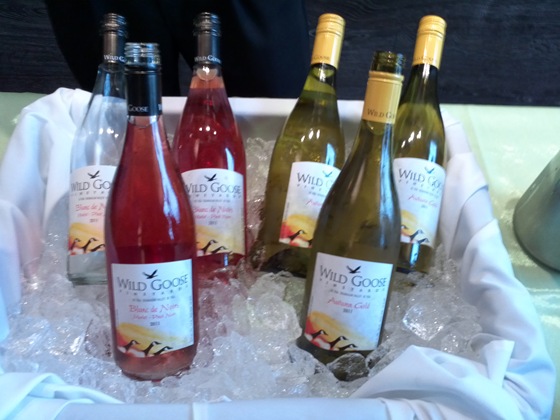 At the very back of the Wine Bar annex I found the Wild Goose table manned by General Manager Roland Kruger and his brother, Winemaker Hagen Kruger. With the wineries in the venue organized alphabetically one would hope guests didn’t miss Wild Goose at the back, as Roland was pouring their delightful 2011 Blanc de Noirs and 2011 Autumn Gold white blend. The slightly off-dry, supremely fruity Autumn Gold is a legendary wine, having racked up loads of awards over the years, including a gold medal at last year’s Canadian Wine Awards for the 2011 vintage. I enjoyed both the Autumn Gold and the Blanc de Noirs, a blend of 30% Pinot Noir, 70% Merlot – both served as reminders that summer is approaching soon (and with it another excellent new vintage of Wild Goose wines)!

To conclude the luncheon there was really no better choice than a Chocolate Tartelette and the newly released (Sumac Ridge) Black Sage Vineyard 2007 “Pipe”. Having noticed the Pipe being poured earlier in the afternoon I heartily endorsed it when a fellow guest asked what he should pair with the Tartelette – no surprise it turned out to be the official suggested pairing in the printed program. The 2007 Pipe is the first vintage under the new Black Sage Vineyard label, which Sumac Ridge has spun off on its own to focus solely on red wines. The wine remains the same blend of one third each Cabernet Sauvignon, Merlot, and Cabernet Franc, fermented into a Port-style wine with 85 grams/L of residual sugar and about 20% alcohol. It’s always an excellent match for chocolate, and lifted up the already spectacular Tartelette even more – leaving a long, rich finish to ponder on the way home.

Chefs Quaglia and the Provence team should be proud of another successful year partnering with the BC Wine Institute to show off their delicious food with more excellent BC VQA wines. I consider myself very lucky to have attended this sold-out event (and all the other Festival events as well), and offer my thanks to the Vancouver International Wine Festival Society, the Wine Institute, and Provence Marinaside for the invitation – see you next year!