Earlier this week, I detailed some of the BC wineries from which I had the good fortune to sample at the Vancouver International Wine Festival. With twenty-seven BC wineries (including the SakeMaker at Granville Island) in attendance this year I could go on and on detailing each one and all the delicious wines they were pouring. In addition to those wineries and wines I mentioned already there are at least several more I would love to highlight – keeping in mind all the wineries were doing a great job promoting the excellent products produced by themselves and the entire local industry.

At the Nk’Mip Cellars table I had a great time catching up with Assistant Winemaker Justin Hall, with whom I always enjoy discussing Okanagan winemaking. We talked about Nk’Mip’s new “Talon” red blend, a fun and approachable mix of Cabernet Sauvignon, Syrah, Cabernet Franc, Merlot, and Malbec from 2010. It’s soft and a little sweet (3.3 grams of residual sugar), and value-priced at $23 – a good deal considering the quality of grapes and winemaking talent that went into it. Being poured alongside the Talon were the Qwam Qwmt (Reserve) versions of the 2011 Chardonnay ($35), 2010 Pinot Noir ($30), and 2009 Syrah ($35), all of excellent quality and drinking very nicely at present, particularly the Pinot Noir. I also felt it pertinent to try out the 2010 Mer’r’iym I had already purchased, and I adored the ripe dark fruit and mouth filling texture. Sadly, there will not be a 2011 Mer’r’iym, as the winery felt the quality of fruit that year was not up to par for such an icon wine – which garners them a lot of respect in my book! 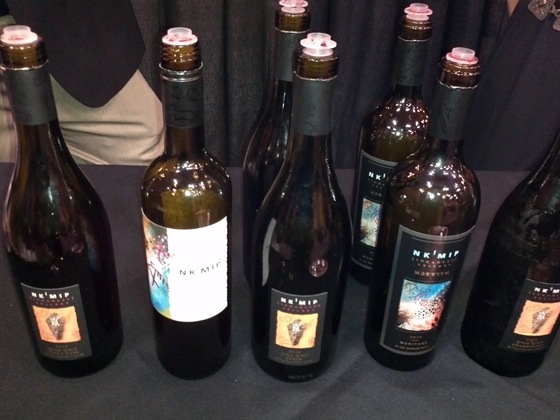 Painted Rock Proprietor John Skinner was a fixture throughout the festival, seemingly manning his booth relentlessly without pause. Helping to pour his fine wines was hardworking Sales Representative Jill and even his son Riley at one point. John’s sole white wine, his 2011 Chardonnay ($30), was front and centre, and was in fact the sole Canadian wine served at the Festival’s centrepiece Bacchanalia Dinner. It’s a very elegant and complex wine with a long finish and superb food friendliness. The Painted Rock team was also showing off their new 2010 Syrah ($40), a fine follow-up to the highly acclaimed 2009 vintage: it’s coming along well, with spicy pepper and slowly softening tannins. The 2009 Merlot ($40) is still exhibiting superb ripe flavours and maturity that I’ve been loving for months, as was the 2009 Red Icon ($55) of course. John decided at the last minute to hold back the 2010 Red Icon despite honestly wanting to share it with the world at the Festival; a little more time in bottle should ensure it is revealed when most appropriate.

I stopped by Quails’ Gate to check out the Stewart Family Reserve wines I’d already purchased, and spotted Proprietor Tony Stewart flitting in and out. Chief Operations Officer Tyler Galts and Winemaker Grant Stanley were present behind the table, pouring the winery’s Chenin Blanc ($18) and Dry Riesling ($17), along with the Reserve Burgundian varietals. The Reserve Chardonnay was as elegant as I remember from many previous vintages, while the Reserve Pinot Noir is back after a year’s absence: a smoky nose led nicely into earthy mushrooms and red fruit. At the Trade Tasting sessions the 2008 Merlot ($23) was also being poured (notable in particular given the current vintage comes from 2010) and it impressed me with a juicy, still somewhat tannic, chocolaty palate. 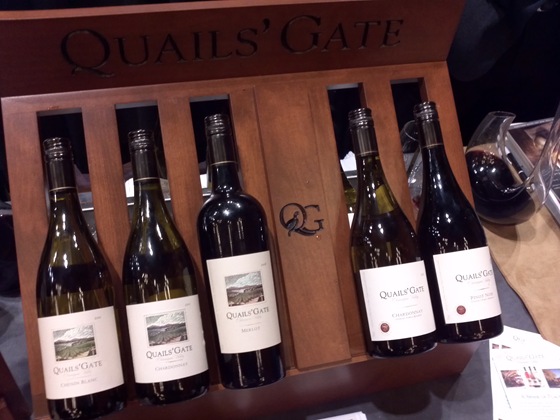 Sandhill’s Senior Winemaker Howard Soon could be spotted now and then, but it was Winemaker Stephanie Leinemann who spent the most time behind the table at the Festival. Although the winery was surprisingly not pouring their Small Lots Chardonnay in the Tasting Room, the regular 2011 Chardonnay ($18) did just fine, serving as a textbook traditional take on the varietal. I found the 2010 Syrah ($22) to be an enjoyable mix of peppery spice and bright berry fruit, with a hint of menthol; unfortunately it is sold out at the winery. When it came to trying the 2010 Small Lots “One” ($35) I was impressed at how well this blend is drinking already, with spot on balance and lots of fruit on the palate – good thing I purchased a bottle in advance! Also being poured at the Trade Tastings was the one-of-a-kind 2010 Small Lots Sangiovese ($30), with youthful tannins within a light-coloured, strawberry-flavoured palate.

Right next door See Ya Later’s Winemaker Mason Spink was happy to discuss the gamut of wines he was pouring. The 2011 Chardonnay ($20) possesses a soft, smooth mouthfeel thanks to malolactic fermentation, with subtle use of oak and apple-dominant orchard flavours. The new “Belle” Viognier-Pinot Gris blend comes in at a budget-friendly $17, and includes some of the best of both grapes, with floral aromas and apple-peach flavours; the 15% Pinot Gris provides acidity to back up the Viognier. The 2010 “Rover” Syrah ($25) was co-fermented with Viognier skins that provide pleasant floral aromas in the wine’s youth, but sufficient acid is present to allow for longer-term aging – as far as 2017 is suggested. The 2010 “Ping” red blend ($28) was darker on the palate, with less acid but more tannins, and could age even longer – I’ve been impressed with the performance of previous vintages. Lastly, for a delectable treat, Trade Tasting attendees were treated to samples of the new 2011 “Hunny” Last Harvest Riesling ($25), Best Dessert Wine at the Fall Okanagan Wine Festival: ideal sugar balance compliments a delicate, creamy palate and long finish – an excellent icewine alternative.

The Martinuik family of Stoneboat Vineyards was particularly excited to be present at the festival, as the timing was perfect for them to show off their new sparkling wine, “Piano Brut”. This Charmat-method sparkling is being released this spring at the approachable price of $23, but Festival-goers had the chance to buy it immediately at the on-site store. Comprised primarily of Pinot Blanc with a touch of Müller-Thurgau, it’s slightly off-dry, with peach flavours and a robust mousse (having been recently bottled). Stoneboat is perhaps best known for their Pinot Noir and Pinotage, both of which ($25) were being poured from the 2010 vintage. In tasting both wines I was taken aback at their highly expressive, fruit-forward aromas that easily wafted from the glass; although either should be able to age well, they are delightfully fresh and engaging at present.

Next door Tinhorn Creek was pulling out all the stops, led by President and Winemaker Sandra Oldfield. She had ensured only the reserve “Oldfield Series” wines were being served, with pouring being assisted by Vice-President Shaun Everest and Sales Manager Mark Butschler. The biggest surprise was seeing the newly released Oldfield Series 2010 Cabernet Franc ($35) on the table, and thus in the on-site store. The Oldfield Cabernet Franc is a brand new addition to the Tinhorn Creek portfolio, and only 374 cases were produced: nine months in bottle have begun to mellow the youthful tannins, but it should still have a long, fruitful life ahead of it. The more mature 2009 Oldfield Merlot ($29) and 2Bench Red ($30) were both showing very well, with round, mouth filling textures, and delicious chocolate flavours. The Oldfield Series white blend, 2011 2Bench White ($23) was also present for a little reminder of its terrific versatility: the soft texture and melon, pear, and peach flavours seem to pair well with almost any type of food.

Nearby, Township 7’s well-known Winemaker Bradley Cooper was helping Proprietor Mike Raffan share a few of their wines. I tried the 2010 Chardonnay ($20) first, and was surprised by the enticing and powerful nose and golden colour; it’s a full-bodied take on the varietal, with plenty of apple and sweet oak flavours. The 2011 Unoaked Chardonnay ($18) keeps the apples, and adds additional fresh tree fruits and citrus in a wine that speaks of summer. The grapes come from Harry McWatters’ Black Sage Bench “Sundial” vineyard, and that close relationship explains why Township 7 was pouring Harry’s McWatters Collection 2011 Chardonnay ($25) at the Trade Tastings. This tasty Chardonnay was both rich in texture and delicate in flavour, with well integrated oak that allowed the fruit to shine alongside hints of toast. 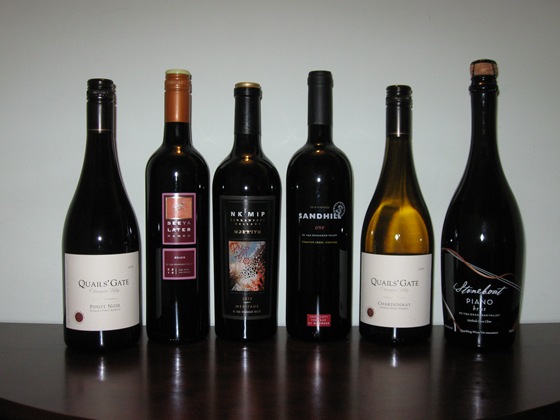 Having spent so much time hunting down BC’s top wines for my collection there weren’t many available for purchase at the Festival which I don’t already own. In addition to my earlier Festival purchases from Nk’Mip, Quails’ Gate, and Sandhill, I added See Ya Later 2010 Rover, which I’ve been eyeing for a while. Lastly, even though it will be widely distributed in stores, I couldn’t help but snag a bottle of Stoneboat’s new Brut to make for an even half-dozen bottles.

Over the weekend I visited the BC Paired Luncheon as well as the Festival Tasting Room one final time with a group of friends on Saturday night. I was pleased to have once again sampled from all of the local talent this year, in addition to some illuminating international exploration. Hearing that next year’s Festival Global Focus is on Sparkling Wine has certainly got me excited to see the international competition and BC’s contribution – we have some charming and sophisticated sparkling wines coming out of BC lately. My congratulations to the Festival Society for another great week, with many more sure to come!