While last month’s Wine Blogger’s Conference in Penticton was an incredible opportunity and a very fun experience, it also yielded a huge cellar dividend as well. Spending a weekend in wine country allowed for a large number of winery visits and the chance to stock up on a great many rare wines not readily available in Vancouver stores. From the drive up to Kelowna on the way there to the drive home from Osoyoos via the Similkameen Valley, we made quite a few stops, and ultimately amassed eight cases of wine by the time we got home! Needless to say I’ll be slowing down my cellar acquisitions until the fall, having checked off virtually everything on my to-buy list in one fell swoop. Most of the wine is now safely ensconced in crates, fridges, and shelves, and I can actually take stock of what I managed to pick up over that whirlwind weekend. 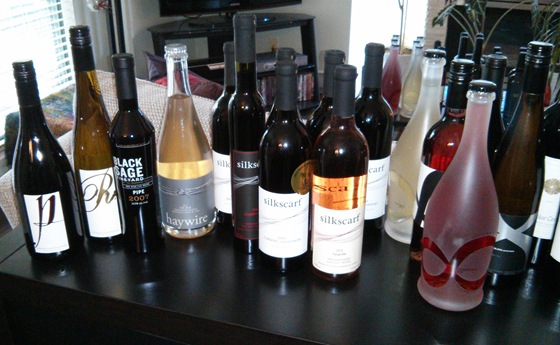 On the way to Penticton my wife and I stopped for lunch at Mission Hill, with the secondary goal of picking up some of the winery’s small lot “Martin’s Lane” wines. These wines – initially Pinot Noir and Riesling, now joined by Viognier – were created as an homage to Proprietor Anthony von Mandl’s late father. I made sure to pick up the 2012 Riesling, described as “intense and refined” in Anthony Gismondi’s 90-point review, and the brand new 2011 Pinot Noir. The Pinot Noir, of which only 485 cases were produced, was recently awarded one of the three Canadian Regional Trophies at the Decanter World Wine Awards, a huge coup for Mission Hill, especially for a wine in only its second vintage!

Down the road in Summerland we visited Silkscarf for the first time and came away supremely impressed, along with several bottles of wine as well. I felt it pertinent to pick up the 2009 Cabernet Sauvignon (400 cases produced) to sample, it having been named Best of Varietal at the Okanagan Spring Wine Festival. Most of the remaining portfolio joined us as well, as we took home the 2012 Viognier and 2012 “Saignee” Shiraz-Merlot Rosé, plus the 2008 Ensemble red blend, 2009 Malbec Cabernet, and 2009 Shiraz Viognier, all wonderfully fruit forward and elegant. For good measure I snagged a bottle of versatile 2010 Cherry Wine as well.

A few minutes away, and at our last stop before Penticton, 8th Generation had plenty of delicious Frizzante and Pinot Meunier Rosé: it was an easy decision to take home 6 bottles each of “Confidence” and “Integrity” Frizzante, plus the consistently excellent Rosé. I also made sure to get a bottle of 2010 Pinot Noir, which was named Best of Category at the 2013 All Canadian Wine Championships. I have very little experience with 8th Generation’s red wines (they produce Merlot and Cabernet Sauvignon varietals as well), so the Pinot Noir seemed like a great place to start. Lastly, I took the opportunity to purchase the unique 2011 “Riesling Selection”, a new style of Riesling for the winery, one that included indigenous yeast fermentation and low residual sugar to yield zesty intensity. 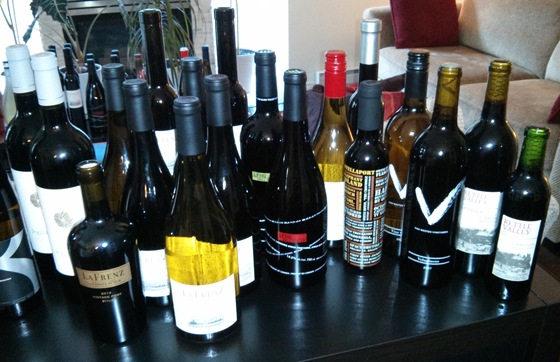 During the course of the Conference I popped in and out of the local Penticton and Naramata wineries to obtain some key selections. At Poplar Grove I was very pleased to find the new 2009 CSM (Cabernet Syrah Merlot), and what I believe is the winery’s first varietal Cabernet Sauvignon, from the superb 2009 vintage. Up the road at La Frenz I really dove in, as the winery releases their entire annual allocation in June: 2012 Viognier and 2011 Reserve Chardonnay joined 2011 reds including Reserve Pinot Noir, Shiraz, and Malbec. The Reserve Pinot Noir topped the Best of Varietal Awards at the Okanagan Spring Wine Festival, and the winery’s other great value reds never disappoint. I was also sure to get a few bottles of non-vintage Tawny and Liqueur Muscat, plus the 2012 Vintage Port to put away for future enjoyment.

Further up the Naramata Bench I visited a few more wineries over the weekend, including stopping at Laughing Stock to pick up my Preferred Share Wine Club allotment of 2011 Blind Trust Red and 2011 Syrah. Having noted that (traditionally) fruit winery Elephant Island’s dominance in the Viognier category at the Spring Wine Festival I picked up a bottle of 2012 “I Told You So…” from the winery’s “Unconventional Wisdom” line of vinifera wines. A bottle of scrumptious Stellaport (solera-style fortified cherry wine) and 2012 Framboise fortified raspberry dessert wine were also enthusiastic choices, but so too would be many of the remaining table and dessert fruit wines if I had the space!

At Van Westen Vineyards I picked up a bottle of nicely maturing 2007 Voluptuous, only just beginning to peak. Winemaker Rob Van Westen trained under Fairview Cellars’ Bill Eggert, and his reds are proving to be just as long-lived as Bill’s epic wines. Finally, a visit to Kettle Valley provided the chance for a bottle of highly-acclaimed 2009 Barber Vineyard Cabernet Sauvignon, of which only 72 cases were produced, and now fully sold out! I also gladly tacked on a little bottle of “Caboose”, the winery’s highly enjoyable fortified Malbec-Petit Verdot. 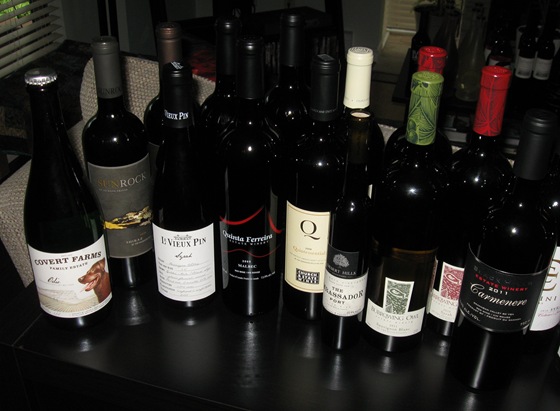 After the Conference concluded we headed south for a little casual wine touring and an extra night’s rest at Hester Creek’s Villas. A few stops on the way to and through the Oliver area provided for some very valuable additional acquisitions. Ironically I didn’t need to make any purchases at the wine shops of Covert Farms, Jackson-Triggs, or Le Vieux Pin, despite passing all three on the way. That’s not to say I wouldn’t have enjoyed more wines from all three, but I had what I needed the most courtesy of the Penticton Wine Information Centre VQA Store: Covert Farms “Odie” Sparkling Pinot Blanc, Jackson-Triggs 2010 Sunrock Shiraz and 2010 Grand Reserve Cabernet-Shiraz-Viognier, and Le Vieux Pin’s superb 2010 Syrah.

As big and as well stocked as the Wine Information Centre is, there were still plenty more bottles out there in the wild, including award-winning reds at Quinta Ferreira. The Oliver winery’s 2009 Cabernet Franc and 2009 Malbec received top ranking in their respective categories at the Spring Wine Festival, and fortunately some remained at the winery when I stopped in; however the 75 cases of Malbec are now all gone and I’m sure the 175 cases of Cabernet Franc will follow quite rapidly. I also took home a bottle of 2008 “Obra-Prima” red blend, named Best of Class at the 2013 All Canadian Wine Championships, and described by Anthony Gismondi last year as inviting, supple, and impressive.

With a luxurious villa suite and dinner reservations at Terrafina Restaurant awaiting us we moved through the Black Sage Bench efficiently. First stop was at Church & State’s Coyote Bowl property to further my vertical collection of their icon “Quintessential” red blend, with the 2009 bringing me up to five vintages since the 2005 debut. A bottle of impressive 2010 Coyote Bowl Merlot came along as well, to join the 2010 Coyote Bowl Syrah I already had at home. Burrowing Owl provided for additional vertical additions, with purchases of 2010 Meritage and 2010 Syrah, plus the brand new 2011 Sauvignon Blanc out of curiosity – a new wine from Burrowing Owl doesn’t come often. Finally, a more leisurely sit down tasting at Black Hills finished off the afternoon, where I was extremely grateful to obtain a hard-to-come-by bottle of 2011 Carménère, strongly recommended to me at the Conference by local blogger Kristof Gillese. 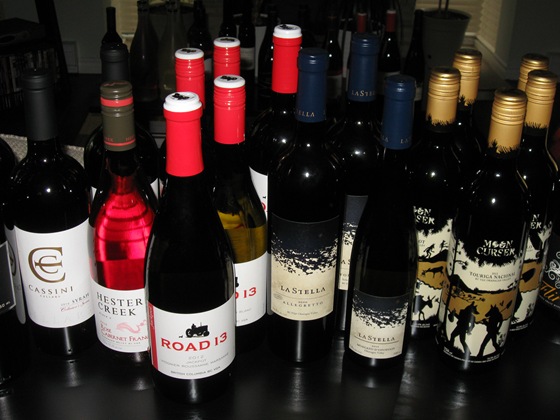 After a relaxing evening and a luxurious in-suite breakfast at Hester Creek it was finally time to head back home, and tick off the final wines from my to-buy list. A couple bottles of Hester Creek’s exciting new Cabernet Franc Rosé were sure to come with us upon departure, and a quick stop at Cassini was made to obtain 2010 Maximus red blend and 2010 Syrah. After visiting Road 13 we emerged several bottles later with newly released 2012 Old Vines Chenin Blanc and 2012 Jackpot Viognier Roussanne Marsanne – a very worthy sequel to last year’s Lt. Governor’s Award-winner. I was also sure to add the new 2010 vintage of “Fifth Element” red blend to my vertical collection, and picked up the small lots 2011 Merlot (175 cases) and 2011 Syrah (630 cases). Further down the road towards Osoyoos we swung by LaStella for a couple bottles of the delightful 2012 Moscato d’Osoyoos, plus the tasty Super Tuscan blend of 2010 Fortissimo, as well as the very rare 2010 Allegretto Merlot (only 110 cases produced).

Only one more stop in the Okanagan remained before we crossed into the Similkameen Valley and our final leg of wine touring. At Moon Curser I stocked up on the newly released 2011 reds, including their reliable Syrah, deep dark varietal Petit Verdot, and exciting Tempranillo. New this year from this Osoyoos winery is a varietal Cabernet Sauvignon, plus an extremely small lot and never-seen-before varietal Touriga Nacional (only 60 cases!). The Cabernet Sauvignon and Petit Verdot both took home silver medals at the 2013 All Canadian Wine Championships, and the Touriga was awarded Best of Category (Other Single Red Vitus Vinifera)! 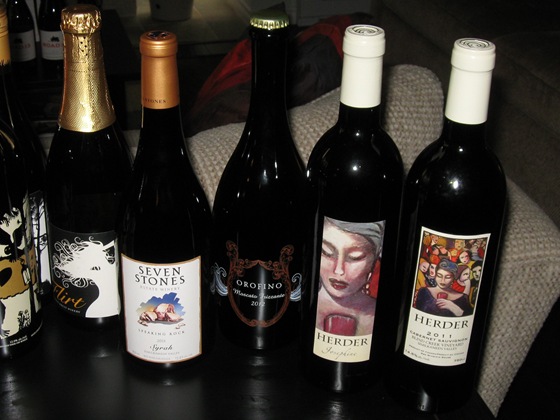 With just a little bit of space left we made sure to visit some of our favourite Similkameen wineries as well. After a picnic lunch along the Similkameen River at Forbidden Fruit, we left with a bottle of “Flirt”, an exciting sparkling peach wine produced in the traditional “méthode champenoise”. I was also sure to stop up the road and pick up the newly released Seven Stones 2011 Syrah (only 104 cases produced), and then a bottle of Orofino’s 2012 Moscato Frizzante for good measure (even though I was expecting more in my upcoming Collector’s Club case). Our final visit before hitting the road in earnest was to Herder Winery, on the outskirts of Keremeos, a beautiful location with some great memories of past visits. Unfortunately the Herders have had to put the property up for sale, so we knew it could be our last opportunity to say hello and obtain some of their fantastic wines. I was extremely lucky, and grateful, to get a bottle of the not-yet-released 2009 Josephine red blend, as well as the 2011 Blind Creek Vineyard Cabernet Sauvignon, of which only 20 meagre cases were produced (basically one barrel!).

Unloading and storing all that wine after arriving home was hard work, but it will provide for many memories and bottles shared with friends in the future. Most of the reds will be cellared until 2015 and beyond, so I look forward to recollecting our exciting trip years from now when it comes time to open them up and enjoy the adventures within.