Last night the members of the BC Wine Appreciation Society enjoyed our final tasting before the summer hiatus. Steven Heiss and his wife Dawn joined us from Gray Monk Estate Winery to sample a broad range of wines produced by this long-time family-owned winery. Steven’s parents George and Trudy started Gray Monk over forty years ago when they planted their first grapes north of Kelowna. Now he and his two brothers – and their respective families – oversee most of the winery’s operations and winemaking, with Steven focusing on sales and George Jr. acting as head winemaker. It soon became clear that working so closely with one’s family keeps things exciting for Steven, as he recounted many hilarious and engrossing tales from the vineyards and cellar! 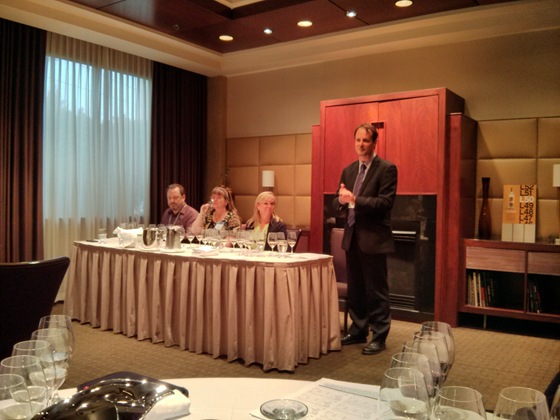 Proprietors George and Trudy originally met in Edmonton, a city which seems to have an unusual draw for the Heiss family (Steven himself spent time there as a musician before returning to BC in the mid 1990’s). It would seem the couple met in the course of Trudy’s tenure as a hair model, on whom George could practice his hairdressing skills. After marrying in 1962, they eventually left the surprisingly vibrant Edmonton hairdressing scene for British Columbia, where they bought the land that would become Gray Monk in 1972. The purchase of a single book on vine grafting helped the burgeoning self-taught viticulturists establish a series of “suitcase vines” brought over from Europe, with a strong focus on Pinot Gris, known as “Grauer Monch” in Germany. Steven shared the fact that his parents originally sold their grapes to others, but the wine that was produced after all their hard work in the vineyard was distasteful to say the least. As a result, by 1982 Gray Monk’s winery had been built in order to facilitate estate winemaking.

We began our tasting with samples of hard-to-come-by 2009 Odyssey Traditional Brut, a new wine released last year with a unique “Celebration Edition” label. The very worthy celebration being noted was Gray Monk’s 30-40-50 Anniversary: 50 years of marriage for George and Trudy, 40 years of vineyards, and 30  years of winemaking. The Traditional Brut complements the winery’s existing Odyssey White Brut, a more off-dry blend of Pinot Blanc, Chardonnay Musque, and Riesling which I recently enjoyed courtesy of some friends with good taste. The Traditional Brut is quite naturally a more traditional champagne blend of Pinot Noir, Chardonnay, and Pinot Meunier, with a toasty, yeasty nose and a fine mousse. It was well liked, particularly as an ideal start to the evening! 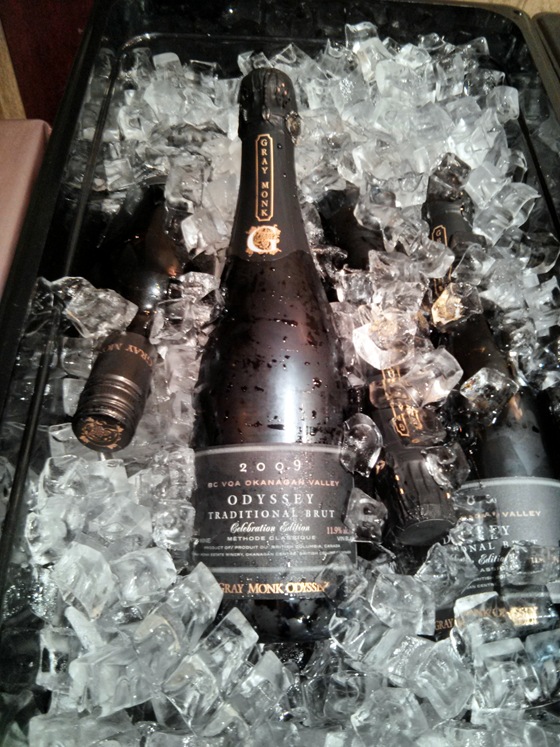 A series of Gray Monk’s many white wines came next, beginning with the (reserve) Odyssey Pinot Gris and regular Estate Pinot Gris. The 2011 Odyssey comes from vines originally planted in 1978, which are treated with special care as they approach middle age. Intended as a drier, more food-friendly wine, it showed off a complex palate and rich texture with plenty of ripe stonefruit flavours. The 2012 Estate was recently named Best Pinot Gris at the Okanagan Spring Wine Festival, and was awash in ripe fruit salad and floral aromas, with a strong peach focus and a sweeter palate than the Odyssey edition.

Following the Pinot Gris, we enjoyed 2012 vintages of Gewurztraminer, Pinot Auxerrois, Siegerrebe, and Ehrenfelser. My personal favourite, and that of many it seemed, was the Ehrenfelser, with an extremely fresh flavour profile and rich fruit salad characteristics. Unfortunately, Gray Monk’s Ehrenfelser vines are still recovering from their earlier use in icewine production, and so it remains a winery exclusive production at present. The Siegerrebe is apparently Trudy’s favourite wine, with a softer canned fruit salad profile that favours pears and peaches, plus a slight perfumed aroma, while the Pinot Auxerrois came across as fairly subdued in fact. The light body and low acid of the Auxerrois followed the highly perfumed Gewurztraminer, which although possessing pleasant lychee aromas ultimately exceeded my own personal preferences in terms of floral intensity – to each his or her own however! A couple of Gray Monk’s Odyssey series red wines were also available, giving us a chance to see how the winery is expanding beyond their traditional focus on aromatic whites. The 2010 Odyssey Merlot comes from Oliver and Black Sage Bench fruit; it provided an intriguing hint of sausage on the nose that carried through on to the dry palate. The 2010 Odyssey Meritage was said to be all Black Sage Bench fruit (a blend of Merlot and Cabernets Franc & Sauvignon); it was even drier than the Merlot, with more tannin to boot, but showing bright fruit flavours and hints of meat and leather on the palate.

A couple of highly enjoyable treats served to cap the tasting, beginning with Gray Monk’s Odyssey “III” Port-style fortified wine. This Merlot-based wine is fortified with spirits locally distilled from Gray Monk’s own grapes, with a focus on retaining the original flavours. The “III” has been produced in a solera-style since 2005, and came across as full-bodied but only moderately sweet (51 grams per liter of residual sugar), no doubt making it more versatile when it comes to food pairing. Flavours of cherry and chocolate would make it an ideal companion for homemade Black Forest Cake. 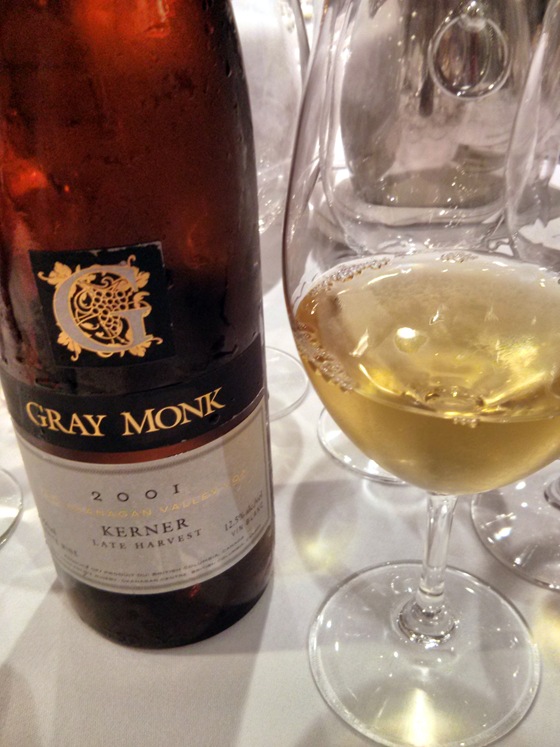 An unexpected surprise from Steven was a sample of 2001 Late Harvest Kerner, held in the Gray Monk wine library for quite a while, and very valuable as an educational experience. On the nose there was an initial funky character (and in fact a couple of the bottles were somewhat corked), and aromas of ink and linen that reminded me of a printing press. Over time apples and honey aromas emerged as the wine warmed up, where it seemed to show better in fact. Altogether it was less impressive on the palate, but a fascinating study of the variety and style. The winery still produces a varietal Kerner, but no longer differentiates based on harvest dates: the 2012 vintage possesses nearly 70 grams per liter of residual sugar, so customers are hopefully purchasing it with some advance knowledge of what to expect.

Although his superb history of the winery came at the beginning of the evening, Steven’s highly enjoyable commentary was a feature throughout the tasting. The details he provided for each wine, and his willingness to answer questions truly enriched the experience, and left everyone talking about how much fun we’d had, above and beyond the well-crafted wines! Many thanks go to Steven and Dawn, and the entire Gray Monk family, for sharing so much with the BC Wine Appreciation Society and the many local fans of Gray Monk.