May Wine Club: From Magnum to Moscato

With the weather having taken a decidedly warm turn for the better we were looking forward to our first wine club dinner at the home of our new members last weekend. Their loft-style condo includes a fantastic roof-top patio a few stories up from street-level, giving us the perfect venue for a pre-dinner beer when the four of us mistakenly arrived a half hour early! Our gracious hosts tried to apologize for not being fully prepared but the mix-up was fully our own fault, plus if anything it merely provided for more time to relax in the warmth of the setting sun. Their view to the west from Commercial Drive encompasses over 180 degrees, from Grouse Mountain to Queen Elizabeth Park, and provides for a unique viewpoint of the downtown core not often seen in photographs of Vancouver. We almost regretfully headed downstairs to enjoy our first course, although a magnum of Gray Monk 2009 Brut provided plenty of motivation! 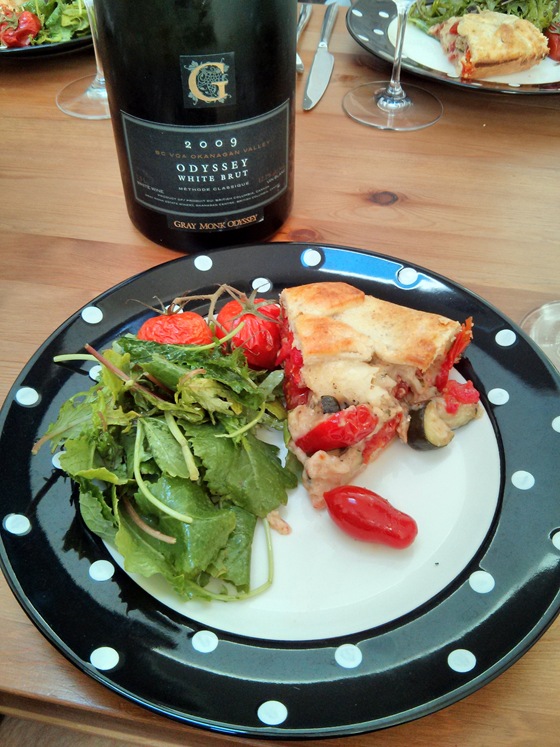 Gray Monk has produced their “Odyssey White Brut” for a while now, and in fact the 2010 vintage was recently released. The wine is a traditional method sparkling, with secondary fermentation in the bottle, but incorporating some non-traditional grapes including Riesling, Pinot Blanc, and Chardonnay Musque. The off-dry palate and fruit-forward flavour profile made for a superb pairing with Zucchini, Cherry Tomato, & Bocconcini Pie. The Brut, while possessing nearly 20 grams per liter of residual sugar, also presented a pleasant tartness to keep the flavours fresh, with prominent lemon and apple, and a cleansing mousse texture. Hints of savoury, earthy/mineral character had some guests suggesting it as a promising complement for oysters, but we were more than happy to gush over the rich and delicious Bocconcini Pie.

At $45 for a magnum the Odyssey White Brut is one of the very, very few large format bottles that’s actually less expensive than the equivalent multiple of 750mL bottles (which in this case retail for $25 a piece). If you’ve got more than a couple people present such a magnum makes for an obvious and easy decision. The winery also produces a Rosé Brut (Gamay Noir, Pinot Meunier, and Pinot Noir) and recently released a “Celebration Edition” Traditional Brut made from Pinot Noir, Chardonnay, and Pinot Meunier, to mark Gray Monk’s 30/40/50 Anniversary last year. The Celebration Edition label may change, but the (tasty) new wine should remain as part of the portfolio going forward. 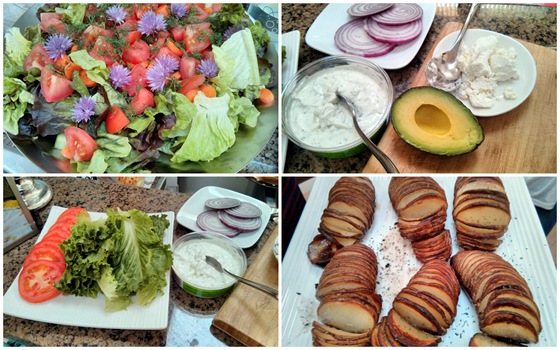 When it came to the main course our hosts had prepared an ambitious and extensive spring barbecue feast! Guests had a choice of chicken or Portobello mushrooms, with several different cheeses and types of buns, along with toppings that included crisp lettuce and tomatoes, red onions, and fresh avocado slices. As if that weren’t enough a giant salad decorated with chive flowers had been prepared by the inspired chefs, plus mouth-watering roast potatoes that we all ogled with glee! The colourful culinary delights made for a very photogenic table, and were sure to satisfy even the biggest appetites. 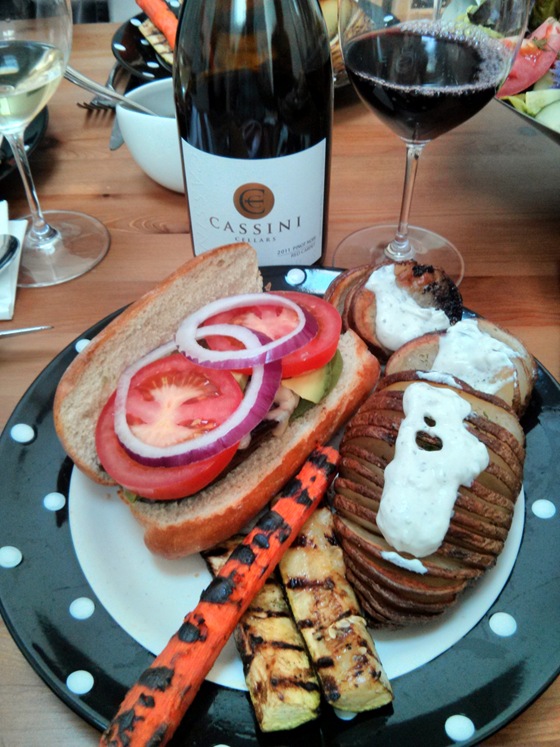 Given the bounty of fresh veggies and the dearth of red meat – plus the heavenly mushrooms – a light Pinot Noir made for an ideal wine pairing. Cassini Cellars’ 2011 “Red Carpet” fit the bill quite well, with a smooth texture and an almost zingy effervescent quality. Flavours of red fruits favoured cherry in particular, plus a plumy finish meshed well with items from the grill. The “backup” bottle of Burrowing Owl 2007 Syrah wasn’t truly necessary, but that’s not to say we didn’t open it and enjoy aromas of lilacs and caramelized sugar. The smoky palate and black pepper notes in the Syrah were natural partners for barbecue, with additional flavours of blackberry and leather rounding things out nicely. We were soon stuffed quite pleasantly full, and took our time sipping the remaining wine while patiently awaiting dessert.

Fortunately, warnings about the upcoming dessert we’d prepared didn’t fall on deaf ears, and the other four diners had taken sufficient care to leave a little room when they saw the size of the cake awaiting them. I had been inspired by a recent recipe I spotted for Caramel Cake, and eventually settled on a variant of a related Jam Cake, with homemade caramel frosting and candied pecans. Working together all afternoon my wife and I eventually produced three layers of heavenly, apricot jam spice cake, which she liberally iced with buttery caramel. On site the cake looked even better served alongside creamy vanilla ice cream, fresh apricots, and few extra pecans for good measure. 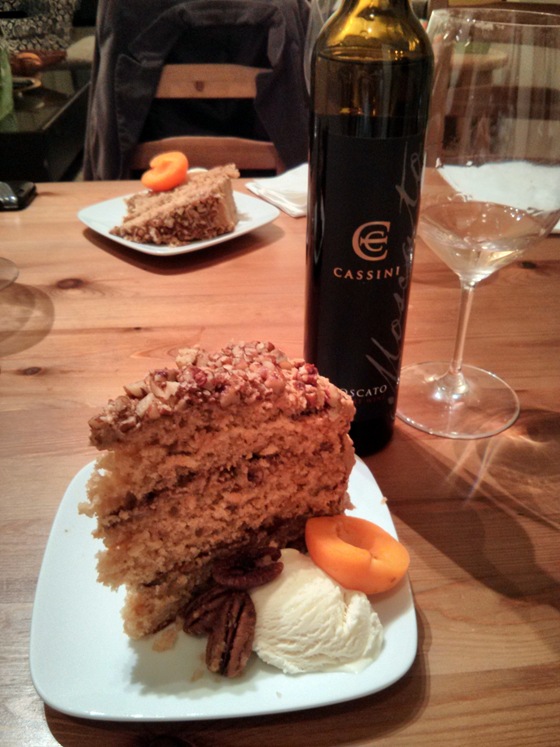 For pairing with such a complex dessert I brought Cassini Cellars’ Moscato fortified wine, suggested as an excellent companion for “deserts such as pecan pie, dark chocolate cakes or ganache, carrot cake, crème brûlée…”  In our glasses the wine revealed lovely aromas of sweet melon and apricot, with a hint of cedar, but unfortunately it turned out to lack sufficient sugar and body to keep up with the cake. The complex, fresh, youthful palate of the Moscato actually got lost behind the sugar and spice of the cake; although on its own the wine was very enjoyable. I suppose the ideal pairing for such a cake would probably be a Madeira or a well-aged Tawny Port. However, we recently finished my only bottle of CedarCreek “M” Madeira, and I’m down to just one bottle of La Frenz Tawny – and a young one at that. Both the cake and the wine were superb individually, so the mismatched pairing did little to dampen our spirits, buoyed by a little extra cake and ice cream that eventually made their way around the table.

With nearly half the cake left despite our best efforts, a few slices were doled out to the hosts (and to more friends the next day) before we made our way back home. Having been on dessert duty twice recently, it’s finally our turn to take on appetizers at our next dinner, and we’ve had a fantastic idea for months! Due to conflicting travel schedules we’ll sadly be skipping June, with high hopes for a July get-together; I’m sure we’ll have plenty to talk about over a few more bottles of great BC wine.