Naramata Bench winery JoieFarm has enjoyed a very productive and positive spring season so far, with some notable awards and honours from international wine competitions. It began earlier in the month when the results from the California-based Riverside International Wine Competition revealed that Joie’s 2012 Rosé had been selected as the Sweepstakes Rosé Wine – the best across all categories/varieties. The Riverside competition has been running for over thirty years, providing wineries from around the world a venue for their wines to be blind-tasted by dozens of professional judges. Not unexpectedly, nearly all of the judges, and many of the nearly two thousands entries come from the United States, yet BC wineries often perform remarkably well: this year Penticton’s La Frenz was named Small Winery of the Year, and last year Wild Goose took home the same honours!

While having your wine named as one of the top five amongst two thousand at such a prestigious competition would be great on its own for proprietors Michael Dinn and Heidi Noble, Joie also received two Best in Class Gold Medals for their 2011 Gamay and 2011 PTG red blend. Both wines are slated to be released this fall, with the varietal Gamay serving to further increase Joie’s growing portfolio of Burgundian red wines. Of course, five silver and five bronze medals are simply the icing on the cake from Riverside, but they also revealed some interesting new developments at the winery, including an upcoming Reserve Gewurztraminer.

Only days after the Riverside results were announced, Michael – who oversees sales and marketing at Joie while Heidi supervises winemaking – found himself composing an additional press release touting another impressive award! The Decanter World Wine Awards had just bestowed a rare gold medal upon Joie’s upcoming 2011 Reserve Chardonnay, one of only 229 golds amongst 14,362 wines in the 2013 competition! The ten-year-old Decanter Awards are often touted as the world’s leading wine competition, and are known to be quite stingy with their top honours; in fact, only seven gold medals were awarded to Canadian wineries this year (out of at least a couple of hundred entries)! Canadian winners included two Ontario and one Okanagan Riesling (See Ya Later Ranch 2011), a pair of Ontario icewines, and Quails’ Gate’s 2010 Reserve Chardonnay. Given the popularity and many years of accolades garnered by the much larger Quails’ Gate for their Chardonnay program, they make for great company, gold medal notwithstanding. One can imagine that upon release in September, Joie’s Chardonnay will see spirited sales indeed! 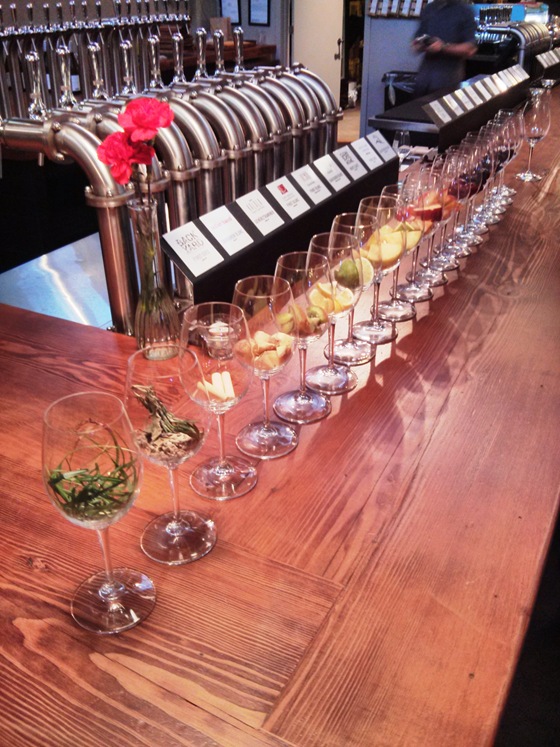 Earlier this month I had the opportunity to taste some of Joie’s current and upcoming releases as part of a series of bi-monthly tasting sessions conducted by Vancouver Urban Winery: the third of four “Sunday School” sessions featured the wines of Joie under the “Better Know a BC Winery” moniker. Gregarious Sommelier David Stansfield was present alongside Michael Dinn to welcome the multitude of “students”, and had even prepared an impressive aromatic spectacle along the bar. An array of wineglasses containing fresh fruits, herbs, and other delights for the senses provided guests with a chance to familiarize themselves with common wine aromas, ranging from fresh-cut grass to chocolate and cinnamon – it made for quite a conversation piece as well!

After an introduction by David, Michael discussed his young winery’s accomplishments and growth since he and Heidi purchased the initial five-acre Naramata Bench vineyard (and their house) in 2002. Their first vintage of 800 cases was financed by a bevy of credit cards in 2004, and produced at neighbouring wineries before their own facilities came into operation. Less than ten years later JoieFarm boasts production of 14,000 cases annually, and 17 acres of estate vineyards, not to mention myriad beneficial relationships with local growers as well. The winery has always focused on aromatic white wines, although more recently natural growth in reds such as Pinot Noir and Gamay has brought about further expansion of their portfolio. 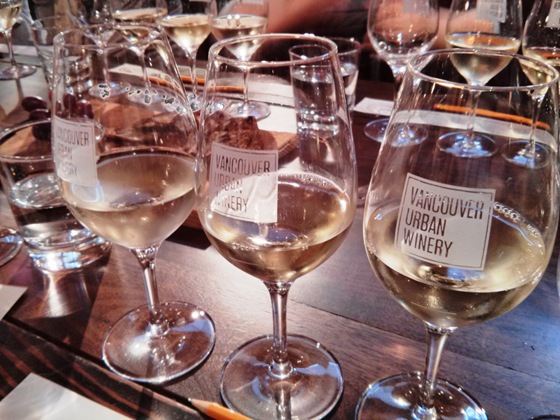 For our Sunday School session David had arranged two flights of Joie’s newest wines, starting with four 2012 aromatic whites. I was immediately impressed with the Pinot Blanc, a new addition to the portfolio since 2011, when the winery held back some juice from being mixed into their “Noble Blend” in order to facilitate a small (180 cases) single varietal bottling. The Pinot Blanc comes from two old-vine vineyards, one in Kelowna and the other on the Naramata Bench, and fortunately those same two 25-year-old vineyards were available for the 2012 vintage. The wine was showing off a beautiful floral, vanilla-scented nose, and very fresh, clean flavours of apples, peaches, and grapefruit. The well balanced acidity did wonders to extend the vibrant freshness, and set a high standard for the remaining whites to measure up against. Best of all 288 cases were produced in 2012, so it should last a little bit longer this year.

The additional white wines in our flight of four included the varietal Riesling, one of Joie’s most championed wines given their Alsatian inspirations. More than 800 cases of 2012 Riesling were produced, once again from a blend of Kelowna and Naramata Bench fruit. It being so young, I didn’t detect any hints of “petrol” on the nose – as it should be in the opinion of some – which was instead awash in lime and grapefruit aromas. A lime-focused citrus palate followed, with lower acidity than I expected, but balanced by a relatively low 15 g/L of residual sugar (low in comparison to many other Rieslings at least).

Like all good Riesling, Joie’s should be able to age, and in order to get a better perspective I recently opened a bottle of their 2008 Riesling from my own cellar: it had easily stood the test of time, retaining plenty of fruit and evolving an appealing light petrol aroma – no overwhelming diesel fuel here. The nose retained freshness while taking on more mature tropical aromas like mango, and the palate was a study in honeyed peaches, while mouth-watering acidity and a lengthy finish helped to perpetuate the enjoyment. I wouldn’t hesitate to add the 2012 vintage to my vertical if this elegant maturity is what I have to look forward to in the years to come.

Following the Riesling we had the chance to enjoy the varietal Muscat, a long-standing and storied component of Joie’s portfolio that comes in part from the winery’s home vineyard on Naramata Road. The 2006 vintage was awarded a Lt. Governor’s Award, and the next year Vancouver chef Vikram Vij bought up the entire 2007 vintage for his eponymous Indian restaurant! From 2012 about 450 cases of Muscat were produced, and in our glasses it easily exuded the intense aromatics for which it is known. Once again I was struck by how clean and fresh the wine came across, with floral, herbal, and stonefruit aromas, and a balanced palate with the characteristic “grapey” flavours of Muscat that David was sure to point out. Although the Muscat contains 12 g/L of residual sugar, it has sufficient acid as well; still, the Pinot Blanc struck me as more pleasantly tart overall.

David had smartly arranged for the 2012 Noble Blend to come last, seeing as it incorporates all three of the aforementioned varieties, in addition to Gewurztraminer (35%), Pinot Auxerrois (12%), and even Schoenberger (4%). Riesling contributes the other major component of the blend, at 29%, while Pinot Blanc makes up 17% and Muscat a tiny but important 3%. The Noble Blend is Joie’s anchor wine, with more than 4,200 cases produced from the 2012 vintage, in addition to several hundred magnums and Jeroboams that make quite a statement with their giant size. The Noble Blend can be found on tap in a growing number of restaurants due to Joie’s partnership with Vancouver Urban Winery and their FreshTAP system of steel kegs. Despite nearly 11 g/L of sugar the Noble Blend possessed the lowest acidity of all four whites; I would have preferred a bit more acid but it remained relatively balanced nonetheless, with aromas of citrus, spice, and clean laundry. The theme of freshness and youth exhibited by the preceding wines was maintained, and should provide for plenty of summertime enjoyment with a variety of foods given its inherent complexity. 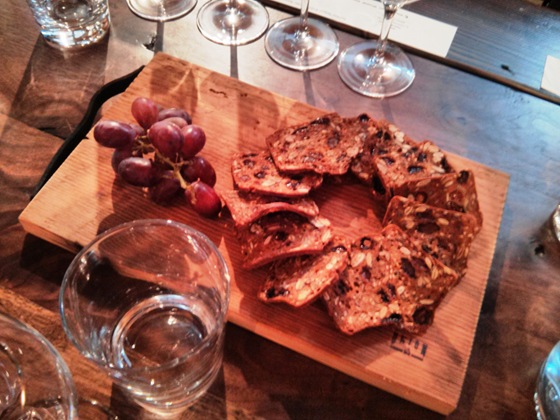 When it came time for our flight of red wines guests were in for quite a treat, as Michael had brought with him samples of four upcoming wines not scheduled for release until September. Included amongst those wines was the winery’s first varietal Gamay, and two versions of the new Pinot Noir. Joie has produced a Pinot-Gamay Noir blend called PTG (“Passe-Tout-Grains”) for some time, but it was only last year that they first released a single varietal red, their first Reserve Pinot Noir (from 2010). For the 2011 vintage the winery has expanded the Pinot Noir release into a “regular” $24 version and the smaller lot $40 Reserve. The very food friendly PTG, usually about two thirds Pinot Noir and one third Gamay, continues to deliver, and the winery produced about 450 cases from the 2011 vintage.

We had the chance to try both Pinot Noirs and noted the differences between them: the Reserve version, of which 270 cases were produced, was noticeably darker and earthier, with toasty, mushroom notes. The brand new varietal Pinot Noir, reasonably priced and with more than double the production quantities, should be very popular, with bright red fruit on the nose, cherry flavours, and hints of cedar and toast. The upcoming 2011 Gamay was actually even better than the Pinot Noir in my opinion, at the same $24 price point. Similar red fruits and hints of cedar were present, but the palate felt pleasantly rounder, and minus the minor bitterness I detected on the finish of the Pinot Noir. The new reds will likely enjoy much consumer success, perhaps even more than the PTG blend given New World familiarity and comfort with varietal wines. Many thanks to Michael (and Heidi) for sharing them, and the superb whites as well, and to David for putting together such a successful tasting!