Every spring the BC Wine Appreciation Society embarks on an annual winemaker’s dinner at a celebrated Vancouver restaurant. Last week the Society visited vibrant seafood restaurant YEW in Vancouver’s Four Seasons hotel, and sipped from a spectrum of delicious Quails’ Gate wines in the company of winery proprietor Tony Stewart. Months of hard work by society Executive members had culminated in a carefully-crafted five-course meal put together by talented Chef Ned Bell and Sommelier Emily Walker.

At the back of YEW’s large open dining room there is a semi-private area for large parties such as ours, so we enjoyed a devoted section while the remainder of the large restaurant continued operating. Upon arrival BCWAS guests were treated to a glass of Quails’ Gate’s 2012 Chenin Blanc, a fresh, tart wine with grapefruit on the nose and apple flavours on the palate. One of only a handful of varietal Chenin Blanc from BC, Quails’ Gate’s lighter take differs from the well-known, honeyed, apples and quince flavoured version from Road 13. 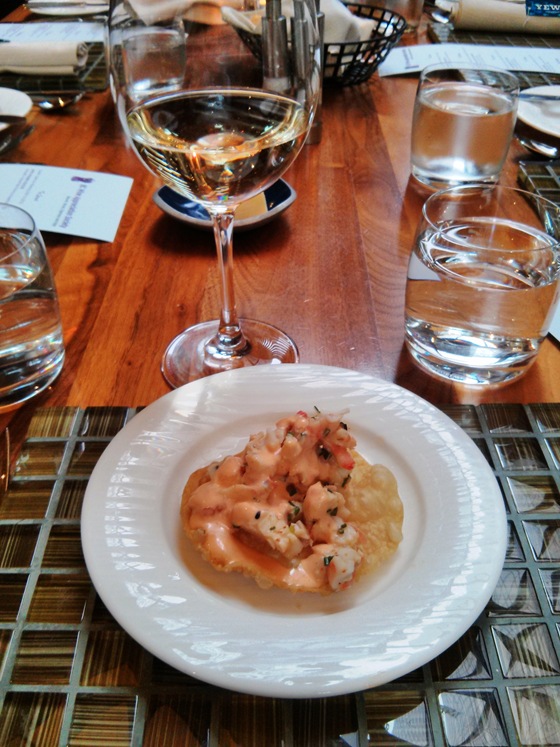 To pair with our charming reception wine Chef Bell had arranged for a surprise amuse-bouche of a crispy spot prawn nacho with creamy aioli. With our dinner taking place precisely at the beginning of the West Coast’s celebrated spot prawn season Chef couldn’t miss the opportunity to feature such a fresh, local luxury, and we very much appreciated the treat!

As Society members caught up with old friends and made new ones around the tables we were served our first course of Spot Prawn Ceviche. A unique mason jar presentation contained layers of creamy avocado, pickled red chilies, and mouth-watering grapefruit-marinated prawns, to enjoy with more crispy tortillas. To pair with such an assertive dish we relied on Quails’ Gate’s youthful 2012 Riesling, backed up by a second glass of the elder 2007 vintage from the cellar. 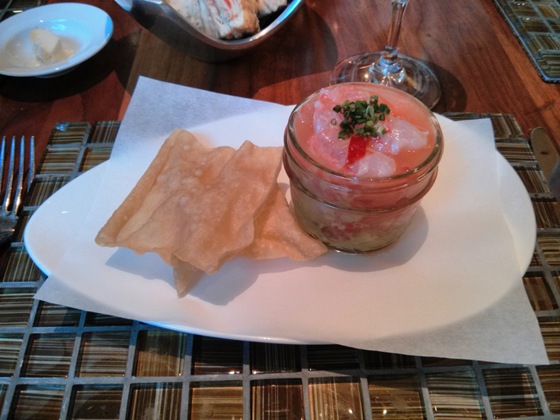 With two glasses of Riesling to enjoy we had the benefit of a little comparative tasting right at the table. The honeyed nose and dry, fresh palate of the 2012 stood up well to the ceviche, with well-balanced acidity keeping the pucker factor in the dish under control, given the generous grapefruit segments. With more than five years of bottle age under its belt the 2007 was still pleasantly delicate, including a zingy, similarly dry palate favouring orange marmalade flavours and a honeyed finish. The older Riesling had taken on some clear petrol characteristics but retained food-friendly cleanliness alongside the additional complexity gained over time.

Following the delicious starter was a sublime Corn Chowder with smoked bacon, leeks, celery hearts, and toasted hazelnuts. Ensconced in the middle of the creamy chowder was a perfectly cooked portion of halibut, and in our fresh glasses Quails’ Gate’s 2011 Stewart Family Reserve Chardonnay. The Reserve Chardonnay, made in small quantities of a mere 600 cases annually, sells out early each year, helped along by a stellar reputation. The 2010 vintage was recently awarded one of only seven Canadian gold medals at the Decanter Awards, along with being named Best of Class at the Pacific Rim Wine Competition. 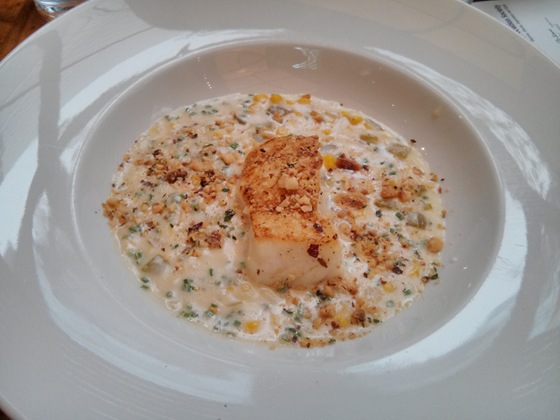 The winery’s 2011 vintage carried on that impressive pedigree via an orchard fruit nose, with hints of melon and toast. On the butterscotch palate one could appreciate the deft balance between fresh fruit and oak leveraged by talented winemaker Grant Stanley. Lively acidity meshed well with the chowder, and the bright, fresh corn amplified the wine’s primary fruit. The long, toasty finish was perfectly complemented by the bacon and hazelnuts in particular, both ideal embellishments for the chowder.

There was definitely some very cleanly scoured empty chowder bowls when it came time for our third course, a unique dish not found anywhere on YEW’s menu: because the synchronicity was too valuable to pass up, Chef Bell had arranged for roasted quail! Stuffed with spot prawns and beautifully presented in a bed of balsamic-drizzled chanterelle mushrooms, earthy lentils, and asparagus with currants and rosemary, the quail was ideal for the 2011 Stewart Family Reserve Pinot Noir. 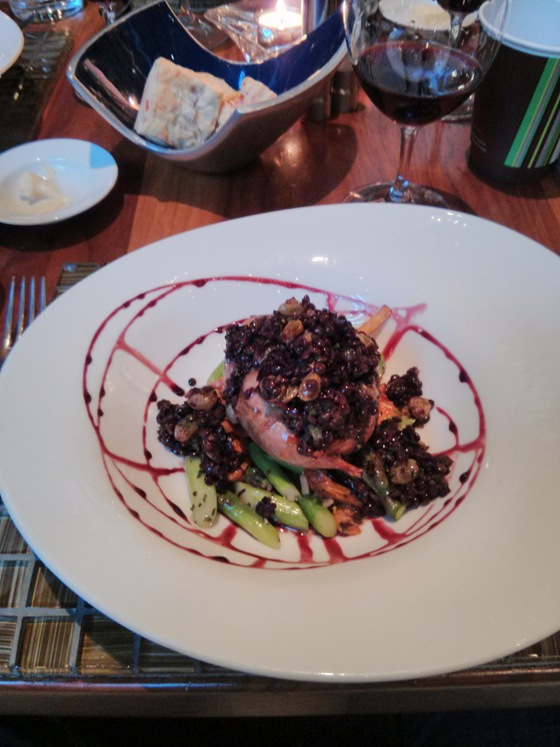 Given the youthfulness of the wine, it was no surprise that ripe tannins were present, but the juicy acidity, berry aromas, and dark fruit made for an ideal pairing. The mushrooms and lentils helped to bring out the wine’s earthy, smoky flavours, including baking spice and a touch of leather. A couple tables encountered over- and/or under-cooked quail or prawns but most diners were quite pleased with the result, and Chef Ned was very apologetic for the hiccups!

Pinot Noir soon made way for Quails’ Gate’s 2009 Old Vines Reserve Foch, it having been opened and poured a couple hours in advance to mellow before serving. To tempt our palates with the Foch a plate of local cheese and a very creative Fig & Anise French Toast was served by the attentive staff. Generous wedges of Velvet Blue Camembert and the legendary Tiger Blue paired well with the assertive wine, and the sweetness of the crispy French toast helped to mellow the wine’s finish. Bright acidity and a smoky palate with notes of cedar, spice, leather, and a bit of barnyard provided for a challenging partner but the well-crafted cheese plate stood up to it admirably. 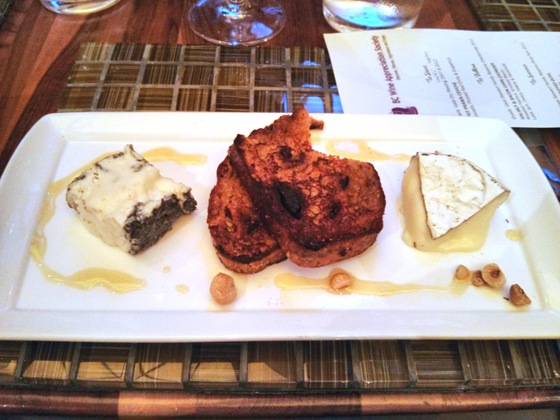 The final course of our meal came with a glass of Quails’ Gate’s famous Optima dessert wine, late harvested in 2011 and botrytis-affected to amplify the flavours and sugar. From the kitchen we received an Apricot Pudding rich in vanilla custard and caramelized apricots, which made for an ideal pairing with the concentrated, sweet Optima. The smooth and creamy pudding was complemented by caramelized honey and a refreshing white peach sorbet on the side. The wine’s elegant, honeyed nose and ripe apricot notes synchronized perfectly with the pudding, and garnered many commendations. 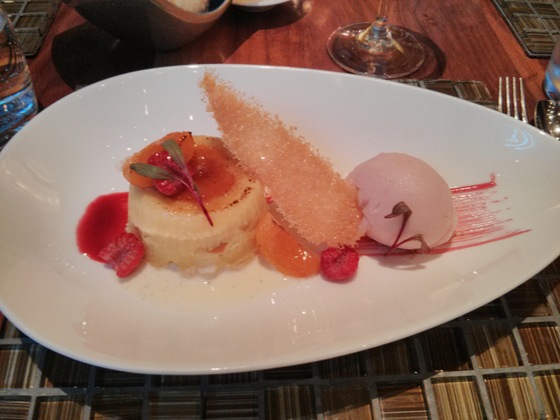 A few keen eyes noticed an obvious difference between some of the glasses of Optima, and it was revealed that the winery had accidentally shipped a mix of 2010 and 2011 vintages. Two tables ended up with the darker-golden older vintage, which Tony explained came from a wetter season that encouraged more botrytis, immediately noticeable on the nose. Versus the fresh, fruitier 2011 release the more complex 2010 was an unexpected surprise; that exceptional vintage was named Dessert Wine of the Year at the 2012 Canadian Wine Awards. I was lucky enough to have received the 2010 in my glass, but from what I heard of the 2011 it was a marked departure from my last experience with the same vintage: it seems likely now that the bottle we opened in March was flawed in some way.

As we protectively sipped from the flavourful Optima and licked our lips of sorbet Chef Bell joined us to provide his thanks. He jokingly referred to firing himself over any disappointments surrounding the quail, but one could tell he was genuinely disappointed and apologetic. Given the spectacular presentations of each dish, he and his team are clearly perfectionists who strive for constant customer satisfaction. To make up for anywhere he had fallen short Chef Bell offered everyone a can of YEW’s very own custom-canned albacore tuna. Described as the only truly sustainable form of tuna, and cooked in a way that maximizes flavour retention, this locally-caught Ocean Wise certified product continues YEW’s commitment to responsible dining. Combining the tuna cans with platters of chocolates and power cookies for the next morning left everyone with a fair-sized bounty of gifts to take home! 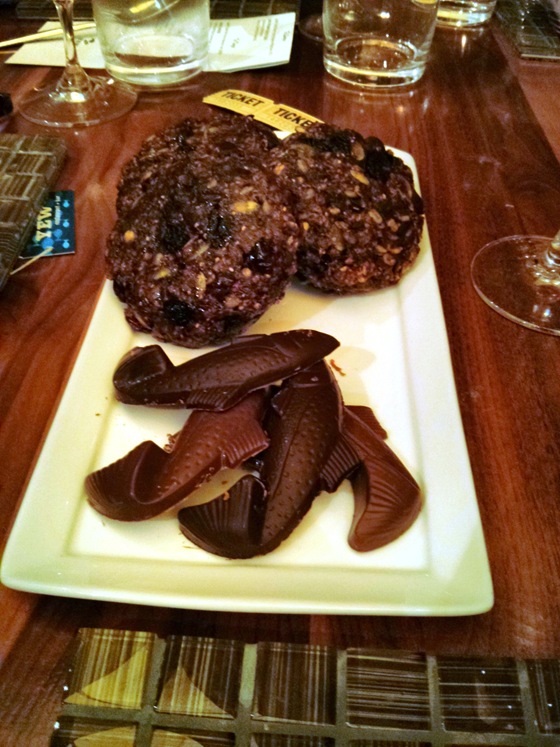 There were plenty of satisfied smiles as we gradually filtered out that night, with lots of praise for the hardworking kitchen team and the servers. The gracious Tony Stewart received many thanks as well for sharing his family’s well-crafted wines, including the signed magnum of Reserve Pinot Noir that went to one lucky raffle winner. And so begins the advance planning for next year’s dinner!