Over the past month I’ve managed to add a few key BC wines to my collection, and would be remiss not to mention them. Some of the wines represent new releases, while others are long since sold out, found in the many obscure locations throughout Vancouver that savvy shoppers seek. I was lucky to stumble across a new source for BC wines right in the middle of downtown Vancouver, where a couple of the most memorable finds of my short wine-hunting career were seemingly awaiting my arrival! 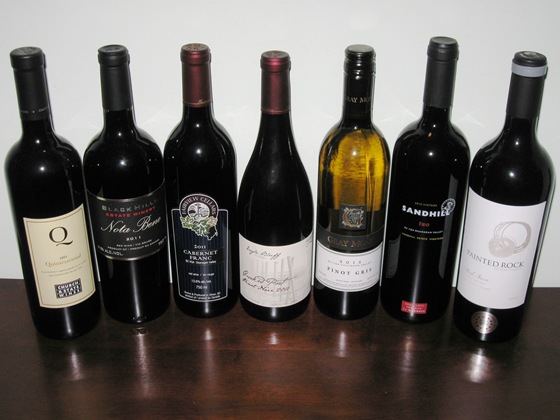 Prior to a discussion on red wines both past and present, the new 2012 Pinot Gris from Gray Monk deserves recognition. Although I’ve enjoyed many Gray Monk wines over the years, and even several bottles of their Odyssey (Reserve) Series Pinot Gris, the “regular” Pinot Gris had always flown under my radar. That all changed when the Okanagan Spring Wine Festival singled out Gray Monk as having produced the best Pinot Gris this year. Say what you want about wine competitions and judging results, but in this case I was prompted to try a new wine I had neglected for too long, and I quickly picked up a bottle to my great pleasure. The excellent 2012 vintage was not lost on Gray Monk, as the ripe, sweet fruit salad on display makes for a great patio sipper, with a peach focus that ensures a clean, fresh finish.

When it comes to red wines, many of the local reds are released in the fall, to synchronize with the Okanagan Wine Festival, but there do seem to be more being released year-round. One notable example is Black Hills: the winery releases their famous Nota Bene blend in the spring, after bottling in September following less than a year in barrel. By the beginning of April the new 2011 Nota Bene was already reaching sold out status from the winery, although many local stores were just beginning to receive their allotments. I picked up a bottle at Yaletown’s Swirl VQA Store in order to continue the growing vertical collection I’m building, with plans to eventually drink from it someday!

A couple more 2011 reds made their way into my hands this month when some friends of mine visited Fairview Cellars in Oliver. I politely requested they pick me up Bill Eggert’s varietal Cabernet Franc and his “Crooked Post” Pinot Noir, if it wouldn’t be too much trouble. While Bill focuses much of his energy on red blends like his “Bear” Meritage, he does release the occasional varietal beyond his well-known Cabernet Sauvignon. I couldn’t pass up the chance to try the small lot (280 cases) Cabernet Franc, nor the Pinot Noir (250 cases), a new project for Bill that began with the 2008 vintage. Bill’s approach to Pinot Noir is different from many, in that he doesn’t bleed off any juice during crush/fermentation to intensify the colour of the remaining wine (and to produce a Rosé as a side-benefit). As a result, Fairview Cellars’ Pinot Noir is on the lighter side colour-wise, but Bill feels keeping it this way retains more flavour.

Stepping back slightly to the 2010 vintage, I acquired a bottle of Sandhill’s Small Lots “Two” red blend during a visit to Granville Island Brewery in mid-May. The Brewery’s retail shop offers a small selection of wines from Peller (which includes Sandhill), a seeming holdover from when Peller owned the Brewery during 2005-2009 (after which it was purchased by Molson Coors). The 2010 “Two” is a traditional blend of 46% Cabernet Sauvignon, 27% Merlot, and 27% Cabernet Franc, from Sandhill’s estate vineyards on the Black Sage Bench. The wine differs substantially from the 2010 “One” blend, which includes Malbec, Petit Verdot, and Syrah. Legendary winemaker Howard Soon and his talented assistants produced the “Two” in a style said to yield “a big, ageable red”. However, it being from the Small Lot Collection, only 275 cases of “Two” were ultimately put together, so adding a bottle to my collection upon spotting it for sale made plenty of sense.

My biggest finds in May were ironically not new releases, but older wines I never expected to see again, certainly not for sale in Vancouver at the present time! Visiting the (literally) underground St. Regis Wine & Spirits store inside the Granville Skytrain Station I came across a surprisingly good BC wine section, including a number of superb cellar selections. Alongside several older vintages of rare Poplar Grove reds, I found the inaugural vintages of two legendary wines: alone on a shelf full of newer vintages was a single bottle of 2007 Painted Rock Red Icon, and a couple shelves over I spotted several bottles of 2005 Church & State Quintessential. Both bottles got my heart racing, as I had neglected to buy more than one bottle of the Red Icon at the time of release, and had missed out entirely on the Quintessential. I now have vertical collections of both wines, so I immediately jumped on the chance to lengthen my Church & State vertical, as well as add an additional bottle from Painted Rock. Needless to say, it was an invigorating day for a wine geek, and I was sure to gush about my exciting finds to a great many people (those who would appreciate it at least).

With two trips to wine country coming up in June my May acquisitions will likely pale in comparison to what I bring home in a few weeks. I’ve been compiling quite a list of wineries to visit and bottles to seek out, so I need to prioritize opening some of the current stock to make room for more!