I recently stopped by the Vancouver headquarters of a couple of my favourite wineries to taste their newest releases: LaStella and Le Vieux Pin produce some of the finest wines in the Okanagan valley, not to mention the most in-demand, so it is always a treat to sample their highly acclaimed wares. With summer rapidly approaching the time is perfect for the two wineries to release their respective 2012 rosés, along with several fresh white wines to enjoy over the coming months. The two small southern-Okanagan wineries are operated by the same parent company, and mutual General Manager Rasoul Salehi as well as winemaker Severine Pinte were on hand to discuss their new and upcoming wines.

LaStella is located just north of the town of Osoyoos, in a beautiful vineyard property on the western shores of Osoyoos Lake. The winery’s Italian musical theme sees them producing a Pinot Grigio named “Vivace” as well as an unoaked Chardonnay with the charming moniker “Leggiero”. As 2012 was quite fortunately a highly productive vintage the wines have benefited from very clean, ripe grapes, immediately evident upon tasting the whites. The Leggiero impressed me with wonderfully ripe orchard fruit flavours and food-friendly acidity that will pair with many fresh local foods – the winery recommends seafood in particular. The Vivace continued the trend with a crisp and refreshing palate favouring citrus and apples, with tropical fruit salad complexity providing for even more versatility in the kitchen.

The other spring releases from LaStella include the “LaStellina” Rosé, and the delightful little Moscato d’Osoyoos – a sweet, low-alcohol, delicately effervescent wine that comes in a 500mL bottle perfect for brunch! The orange blossom aromas in the Moscato lead into a very clean, mouth-watering palate that would also be ideal in the aperitif role. The LaStellina is off-dry as well, and rather pale in colour this year, due to a reduction in Merlot from 100% to 80% – the remainder of the wine now comes from a unique blend of 10% Pinot Nero (aka Pinot Noir) and 10% Cabernet Franc grapes. The bright palate is dominated by strawberry flavours with earthy, mineral hints; the winery suggests a spicy food pairing to mesh with the lush aromatics and low alcohol – sounds perfect! 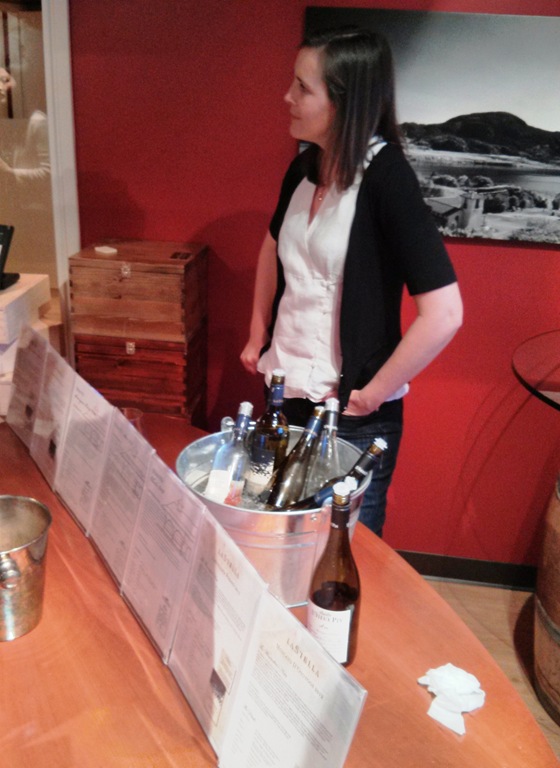 Sister winery Le Vieux Pin can be found further north outside the town of Oliver, where Winemaker Severine embraces the winery’s French theme that is centered on Rhone-style wines. Although striking Syrahs and a voluptuous Viognier blend are prominent, Le Vieux Pin also produces a varietal Sauvignon Blanc: the 2012 vintage continues the tradition of a mild, subdued approach that shows off herbal, floral perfume. The wine eschews strong grassy notes and overly tart citrus flavours in favour of a more subtle, complex take on the grape, certainly more to my liking.

The Viognier-Roussanne-Marsanne blend named “Ava” sees at least several months in oak before delayed release, so the 2011 vintage is only now coming onto the market. In 2010 the blend consisted of more than 90% Viognier, but now 11% each of Roussanne and Marsanne have contributed to a very round, mouth-filling texture, and a long, smooth finish. There is a toastiness on the nose brought about through the partial oak aging, but lush tropical fruits emerge over time. Since it’s my opinion the 2011 has improved on the already excellent 2010 version I’m quite pleased to see that nearly twice as much was produced this vintage – almost 500 cases are available for sale to the wine’s many fans.

Not to be outdone by LaStella, Le Vieux Pin’s take on rosé once again proved to be extremely impressive. The 2012 “Vaila” Pinot Noir Rosé is very aromatic, with an intense, tart red berry palate and dry finish that keeps you coming back for more. It will sing during summer months, but I remember opening my last bottle of 2011 Vaila during a large Christmas dinner potluck last year: it was a near-perfect pairing praised by everyone in attendance, showing the easy versatility of this consistently superb wine. 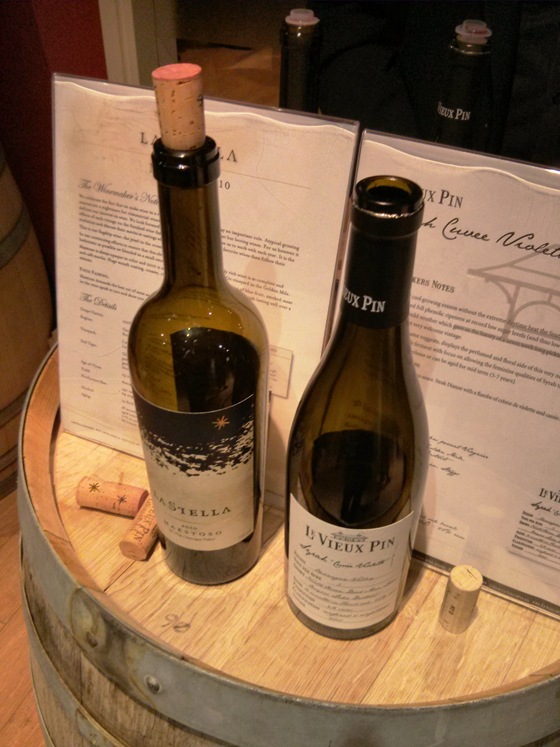 While Severine was busy pouring the whites and rosés for guests on one side of the room Rasoul had a special treat around the corner as he poured the brand new LaStella 2010 Maestoso Merlot. The Maestoso is LaStella’s flagship wine, containing grapes lovingly tended to in the winery’s home vineyard on the lakeshore. Each year only a small amount of Maestoso is produced, typically on the order of 150 cases, due in part to the low yields, often approaching 1 ton per acre. I have been carefully collecting a vertical of this wine since the first vintage in 2006, without much of an idea what to ultimately do with it however; fortunately it will last until I make up my mind! Maestoso is a big wine, full of dark fruit, mocha, and black olive flavours, but I was honestly surprised at how approachable the 2010 came across given its youth. It should age gracefully given the rich, ripe tannins, so there is no hurry to consume it any time soon, and additional complexity will no doubt emerge over the many years ahead.

Alongside the Maestoso, Rasoul was happy to show off a surprising new wine from Le Vieux Pin: the upcoming “Cuvée Violette” 2011 Syrah is an easy-drinking, more entry-level red aimed particularly at restaurant wine lists. Although it will retail for an approachable $30 an aggressive sommelier might be able to list it for $50 after the wholesale discount. Being able to include a well-made varietal Syrah from a highly respected Okanagan winery at that price should make it an easy sell, while helping to introduce consumers to the higher-tier Syrahs from the winery, including the exciting Equinoxe reserve version.

In fact, both the “regular” 2010 Syrah, and the yet-to-be-released 2010 Equinoxe Syrah were available to sample as part of an international comparative tasting Rasoul had assembled for the occasion. Along with a few bottles from France, California, and even New Zealand, local versions from Burrowing Owl, Church & State, Jackson Triggs, and Nichol Vineyard were also present. The Le Vieux Pin Syrah had no trouble standing up to the competition, with plenty of bright fruit and a fresh, tart palate leading into a smooth, slightly raisiny finish. The Equinoxe version exhibited additional complexity coming across on the spiced nose and intense dark fruit palate, framed by a sublimely rich, full texture. Fortunately, with so many options over the summer in the form of delicious whites and rosés, I should be able to keep myself busy while I await the fall Equinoxe release!