Our group of wining and dining aficionados has been working on re-starting our monthly wine-pairing dinner series ever since the departure from Vancouver of one of the three founding couples. In March we enjoyed a fantastic meal with some other friends who just moved back to Vancouver, and for April a different couple joined us for yet another monthly celebration of BC wine and food. With so many new wines being released these days from the excellent 2012 vintage it was quite a challenge to settle on just a few bottles. I certainly wish we had the time for more than one shared dinner per month, but coordinating six people is surprisingly challenging – leaving barely enough time to decide on what wines to serve and tasty food to prepare! 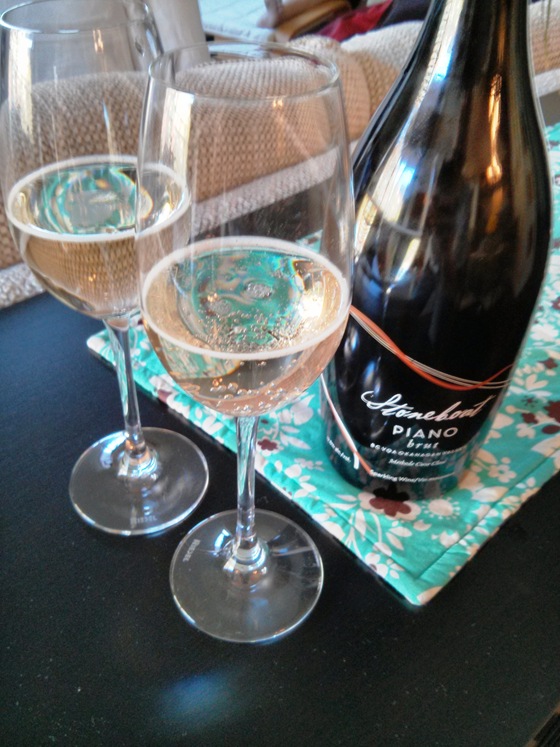 Our new guests had elected to contribute the appetizer course, and since my wife and I had offered up hosting duties that put the second veteran couple on dessert. Since one can never be sure if the appetizer course will require on-site preparation it’s best to prepare a reception wine; and really it’s just an excuse to have another bottle of wine. Having tasted and picked up a bottle of Stoneboat Vineyards’ brand new sparkling wine at the Vancouver Wine Festival it seemed like just the time to crack it open. Since our entree course had required so many types of cheese I had plenty of leftover pieces that made for a great cheese tray to open the evening. A couple supplemental cheeses from Benton Brothers rounded things out with an amazingly creamy Délice de Bourgogne and a tart round of St. George goat cheese from Farm House.

The Martiniuk family at Stoneboat revealed their first sparkling wine earlier this spring, a blend of Pinot Blanc and Müller-Thurgau produced via the very rare Charmat method. Although relatively common elsewhere, Charmat-method sparkling wine hasn’t been seen in British Columbia for a generation, as John Schreiner detailed in early March. In short, tank fermenting and bottling the wine under continuous pressure via Charmat retains the finessed carbonation found in (bottle-fermented) traditional method sparkling, and gains the advantage of simplicity by avoiding riddling, disgorging, etc. Bottled in a classy, silk-screened bottle, the Piano Brut found quick converts amongst us, being described as clean and fruit-forward with fine bubbles. It was drier than expected given the fresh, fruity aromas, and received compliments for being “uncomplicated” – ideal for refreshing spring and summer sipping. 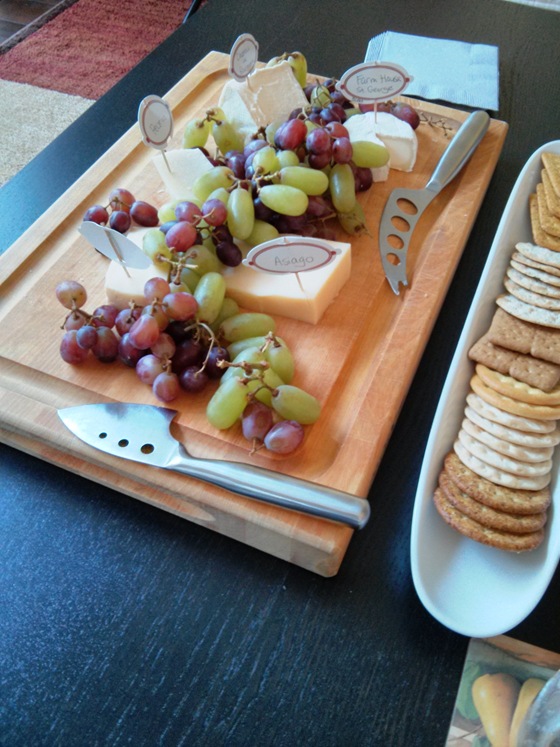 Our guests arrived with covered trays for the oven and a couple of bottles of a very exciting new release I had recently sampled: Clos du Soleil’s 2012 Rosé has been impressing me for at least a couple of years and the newest vintage is the best yet in my opinion. We prepared the oven to warm up some exciting stuffed acorn squash and opened the wine to admire the beautiful colour. The acorn squash had been stuffed with a mouth-watering mix of black quinoa, onions and mushrooms, chorizo (for those who desired it), and plenty of parmesan cheese. The wine paired very well given its underlying earthy flavours, brightened by plenty of strawberry, rhubarb, and hints of bubble-gum. When chilled it presented as low acid but a more appealing tartness developed as it warmed up a bit. Bringing two bottles was an excellent idea, as we had no trouble polishing them off before our entree course was served. 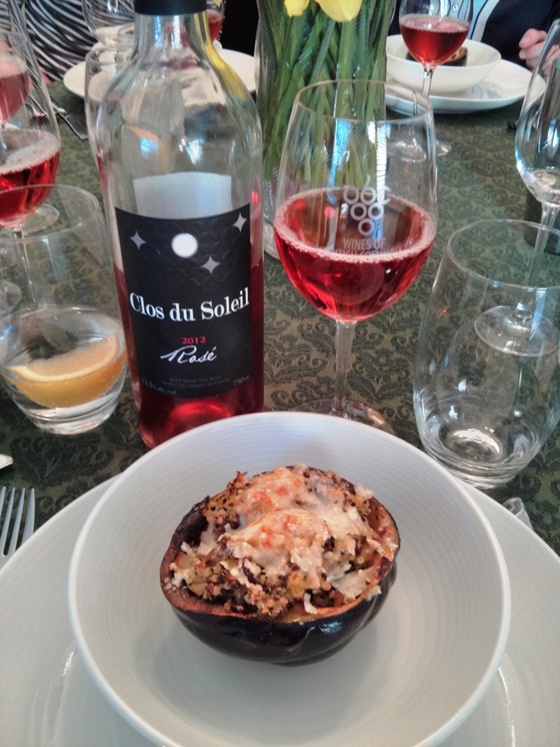 When you are cooking for six and don’t want to spend the whole time in the kitchen, lasagne is a chef’s best friend. In this case this versatile pasta dish made perfect sense, to ensure we would be able to enjoy the appetizer course in peace while our casserole baked in the oven. We’d elected on a creamy vegetable lasagne, with Bechamel sauce and lots of spring vegetables. Some modifications from the source recipe saw us adding roasted asparagus and plenty of sautéed brown mushrooms in addition to the sweet onion, leeks, zucchini, and peas. On top was a heavenly mix of Mozzarella, Fontina, Asiago, and Pecorino Romano cheeses; and on the side a beautiful fresh salad of frisee and Boston lettuces, watercress, and celery. 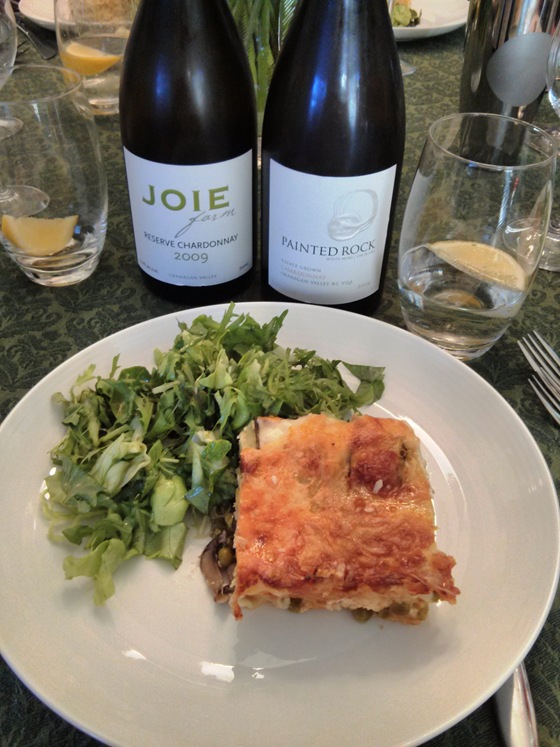 To enjoy alongside our admittedly fantastic lasagne I selected two very different bottles of 2009 Chardonnay. The JoieFarm Reserve came from Naramata Bench and Okanagan Falls fruit, fully malolactically fermented in oak, and then oak-aged for nine months with lees stirring. The Painted Rock on the other hand, from Skaha Lake Bench fruit, was only partially oak fermented, with no malolactic component, and then oak aged (sur lie) for four months. Ironically the Joie fruit book-ended Painted Rock in between Naramata and Okanagan Falls, but the two wines represent significantly different approaches to Chardonnay production.

We split up the bottles across the table, and I ended up tasting the Painted Rock first: it came across a bit toasty, with oak aromas present, but well integrated on the palate, and no woodiness apparent. There was plenty of fruit, with citrus and lots of apple flavours, plus lively acidity. The fresh flavours paired well with the lasagne, bringing out the fresh lemon zest I had mixed into the ricotta cheese.

The Joie Chardonnay was quite an about-face, as it featured a more subtle nose with an apple focus, while the oak influence became more apparent on the palate – the opposite of the Painted Rock. The creamy texture of the Joie was a major difference of course, due to the malolactic fermentation and lees stirring. Such a full texture was appreciated on its own; however, the cleaner, crisper finish from Painted Rock paired best with our particular meal. The 2009 vintage was only the second Chardonnay from Painted Rock, but it’s apparent that the winery has long been cultivating a very food-friendly style; more recent vintages have been equally advantageous and delicious! 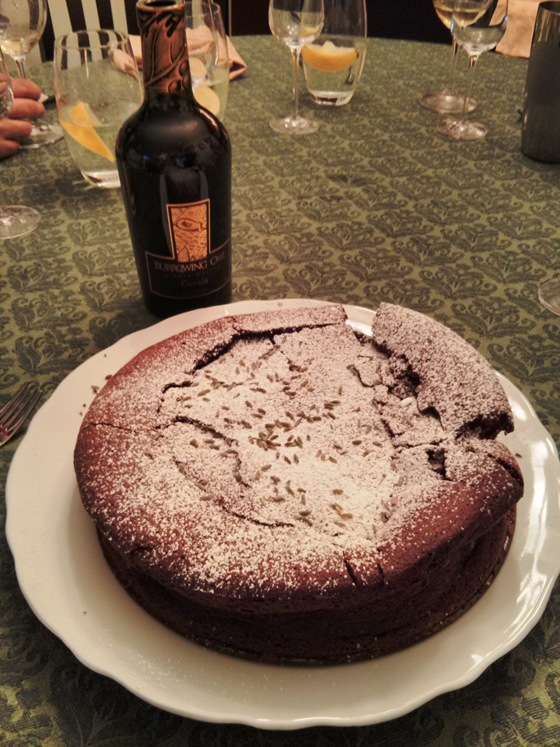 We all managed to restrain ourselves from enjoying a second piece of lasagne in anticipation of the exciting dessert sure to come. All we knew in advance was that it had required the purchase of a number of specialized ingredients, and had necessitated the use of “every single item in the entire kitchen,” in the words of the chefs. Once we were presented with the reveal of Flourless Salted Chocolate Lavender Cake we were supremely impressed, and couldn’t wait to taste such an ambitious creation! To pair with the delectable dessert was a bottle of the first release of Burrowing Owl Coruja, a solera-style fortified Syrah, purchased at the winery last spring (right before it sold out). If that wasn’t enough, a bottle of 2006 Pipe from Sumac Ridge was also on hand! 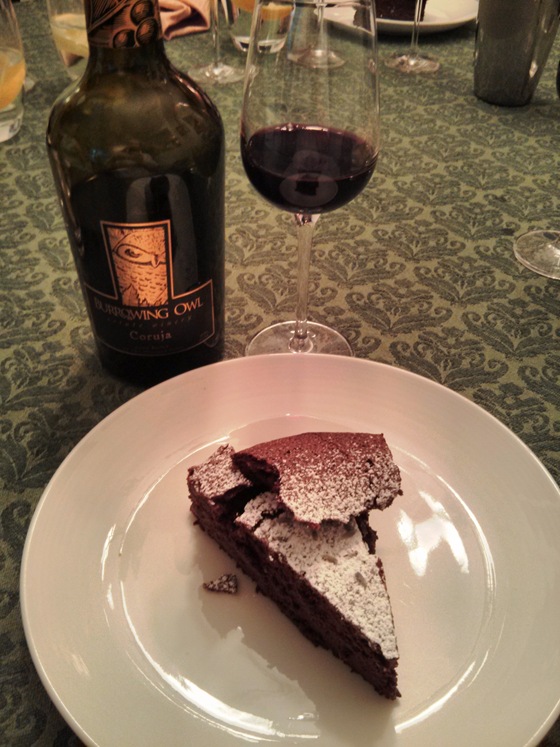 The “cake” was more of a giant chocolate soufflé – something none of us had any problems with – and the addition of edible lavender sprinkled on top provided for a wonderfully floral hit following the super-smooth, salty chocolate explosion. It was definitely the sort of dish that we’ll be talking about for a long time to come, and garnered many compliments for the talented chefs! Even better, dessert was made all the more enjoyable by the beautifully-bottled Coruja, which showed off rich dark cherry and milk chocolate flavours, and delightfully enhanced the salt in the cake.

The Pipe made for an excellent follow-up once we finished the Coruja, as it is consistently a natural match for chocolate, with cocoa characteristics on the nose and palate. Compared to the somewhat yeasty nose on the Coruja, the Pipe – an equal parts blend of fortified Merlot and Cabernets Franc and Sauvignon – was much more chocolaty, and finished with a rich, creamy texture in concert with second helpings of cake. There were to be no leftovers from such a marvellous culinary creation! We’d managed to once again put the icing on the proverbial cake of another spectacular meal, thanks to great friends and plenty of superb BC wine.