I received an incredible surprise last Tuesday when I was informed that I’d won two seats to the highly anticipated (and sold out) Joy Road Catering & Road 13 Vineyards dinner at Vancouver Urban Winery. Organizer Kurtis Kolt had randomly drawn my name from among many online entries – in which entrants were invited to post a photo of any Road 13 wine. I’d entered the contest the week before, immediately uploading a photo of the hefty magnum of Sparkling Chenin Blanc included in the blog post I was working on at the time. I was very excited and grateful to actually end up the winner, having had to forgo purchasing tickets in lieu of replacing my dying cell phone instead. In place of my already engaged wife I invited a good friend of mine: he’d actually been the one to open the Sparkling Chenin Magnum at his place only a couple weeks beforehand – it seemed particularly apt he join the fun! 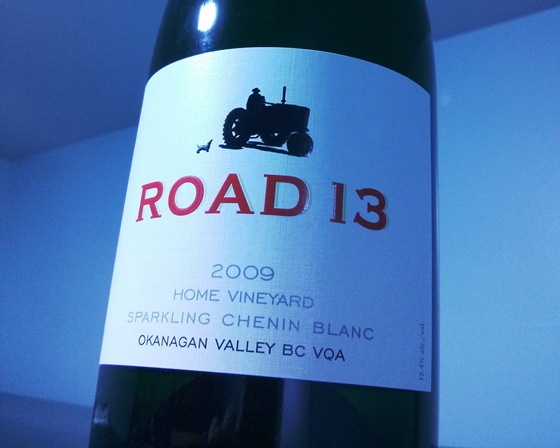 Arriving at Vancouver Urban Winery we passed through the impressive wooden doors to receive a glass of Road 13’s legendary Sparkling Chenin Blanc. Four hundred and ten cases of the 2009 vintage were produced, and sold out long ago, so we considered ourselves very lucky to receive it upon arrival, let alone via generous refills. Fortunately we are rapidly approaching the early summer release of the 2010 vintage, and I’ll once again be stocking up on this gem.

As guests milled around and admired the architecture and spotless tanks and barrels throughout what is – by day – a working winery, servers began to circulate with exciting hors d’oeuvres. Most interesting was the Wild Nettle Pesto with house made Ricotta, the nettles having been locally harvested the day before from Joy Road’s base in the Okanagan. The Pesto & Ricotta was served on sliced baguette with Prosciutto for those who fancy it, made from Joy Road’s very own pigs in an honest and straightforward manner – Proprietor Dana even told us this particular pig’s name and details of his life on their property.

Oysters from Outlandish Shellfish Guild were next to appear, served with flair on full barrel staves, with a touch of caviar, chives, and lemon. With glasses of a perfect pairing in hand most guests descended on the oysters with vigour. If the oysters weren’t enough, we also found ourselves being offered “Fried Pork Rillet with molten Quince centres”. Although rillettes is typically similar to pâté the preparation from Joy Road saw little fried spheres almost like Risotto Balls; pretty easy to pop in your mouth and wash down with the rest of your Chenin Blanc before finding a seat. 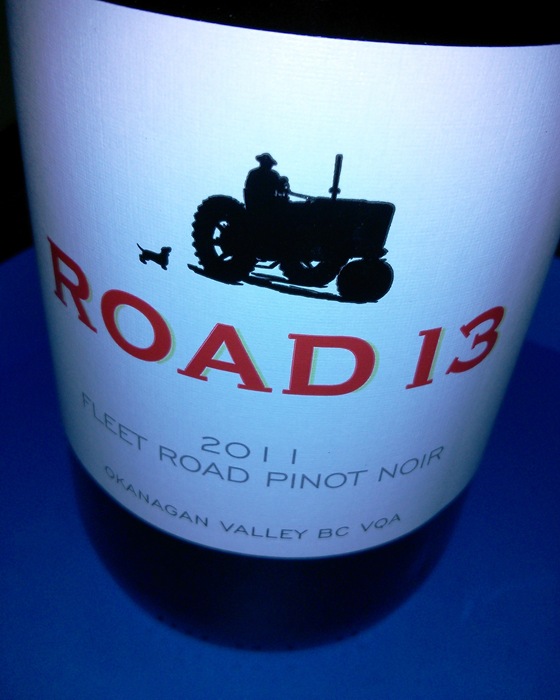 At two long tables spanning most of the room sat probably 80 people, including Road 13 Proprietors Mick and Pam Luckhurst, and even a couple who’d flown in from Alberta just for the meal! While Kurtis introduced Mick and Pam to the crowd along with Sommelier David Stansfield we sipped from glasses of Riesling. I believe it was 2011 Home Vineyard Riesling as opposed to the 2009 Jackpot Riesling, which ironically is still available while the 2011 is sold out (180 cases of $30 2009, versus 80 cases of $24 2011).

Before long the first course of “Poached Trout Choucroute Garni” was served, in a Pernod Butter sauce with Chervil & Tarragon. Our glasses were refilled with the marvellous 2011 Jackpot Viognier Roussanne Marsanne I so recently enjoyed, and conversation was soon struck up with tablemates. I discovered that across from me was the mother of one of my wife’s undergraduate students, who was amused to text her daughter the surprising news that she was dining with her professor’s husband.

We needed to finish the trout course in short order, as room on the tables had to be found for the family-style course of lamb, risotto, beet carpaccio, and watercress salad. There was just enough time for a refill of VRM before the first of two red wines came our way – 2011 Fleet Road Pinot Noir. This small lot (125 cases) Naramata-sourced Pinot Noir is mysteriously not mentioned on Road 13’s website, but I was lucky enough to acquire a bottle from the winery last fall; whether it is still available is in question. In September John Schreiner pointed out the bright and vibrant fruit, which I would agree with: it’s still a youthful wine that tastes a bit restrained, but the potential for elegance is certainly there. The Pinot certainly went down well alongside “Pearl Barley Risotto with Wild fire Morel Mushrooms and Parmesan” plus “Heirloom Beet & shaved Fennel Carpaccio with Cider Vinaigrette”. 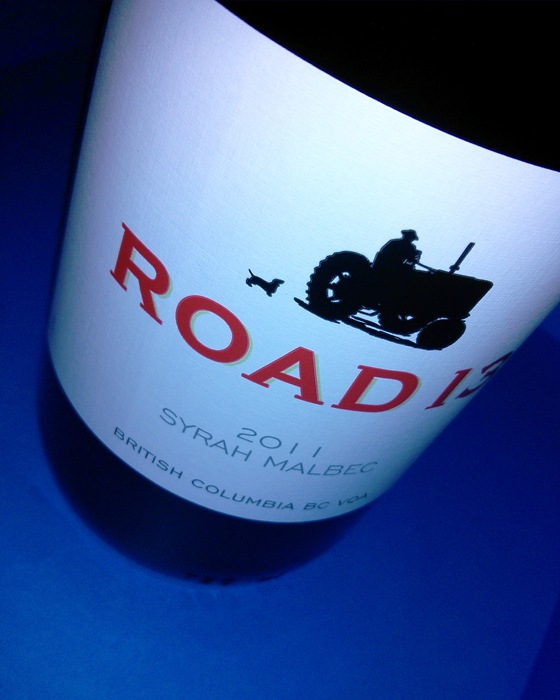 There was plenty of food to go around and second helpings from the tableside platters and bowls were easy to come by. I certainly enjoyed more risotto and beets, plus very tasty greens in the form of “Wild Apex Watercress with Italian Bacon, fried Hazelnuts & Balsamic Vinaigrette”. When the Pinot Noir ran dry we quickly received another of Road 13’s new wines – 2011 Syrah Malbec: it’s an uncommon blend locally, with two thirds Black Sage Bench Syrah and one third Malbec from the Similkameen Valley and Summerland. Unlike some of Road 13’s super-small lot wines as of late, a relative bounty of 550 cases were released last September. It’s surprisingly smooth and approachable for a 2011 red, with generous dark fruit flavours – no doubt ideal for the “Alley Spit Roasted lamb legs”. I didn’t get into the lamb legs, but did enjoy Dana’s apologetic confession that they had been roasted merely outside the building, and not in a proper alley. 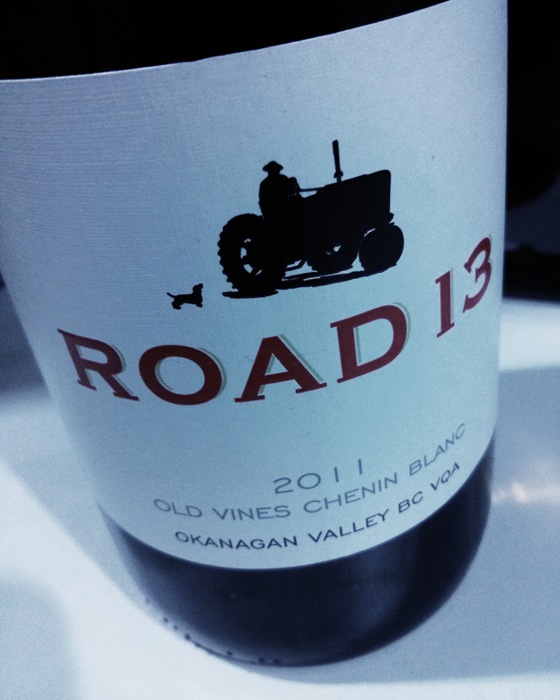 Dana and Co-Proprietor Cam made sure to remind everyone to leave room for after-dinner cheese and caramels, including fresh Carmelis Goat Cheese, and Upper Bench King Cole Blue. A glass of honeyed 2011 Old Vines Chenin Blanc meshed nicely with the cheese, and was particularly harmonious with fresh honeycomb and quince jelly “membrillo”. Four hundred and sixty-nine cases of 2011 Chenin were produced, and while still for sale in limited quantities, it is typically limited to “Club 13” members soon after release due to its popularity.

Stuffed full and still chewing on salted chocolate caramels we were sure to roundly applaud the entire crew from Joy Road and Vancouver Urban Winery for feeding and hosting us so wonderfully. There were many thanks to Mick and Pam for sharing so many rare wines, and to Kurtis for initiating, planning, and organizing the evening from which we had all benefited greatly.