Wines of BC Vintage 2012 Preview

Yesterday afternoon the fine folks at the BC Wine Institute brought together several Okanagan winemakers and viticulturists to discuss the 2012 vintage and preview some of the their upcoming wines. The panel discussion and tasting took place in Hawksworth Restaurant’s beautiful upstairs York Room, and included representatives from regions including the Golden Mile and Black Sage benches, Naramata, Summerland, and Kelowna. Unfortunately there wasn’t any contribution available from outside the Okanagan Valley, such as the vibrant Similkameen Valley, but the expertise and experience on offer was much appreciated by the many attendees. 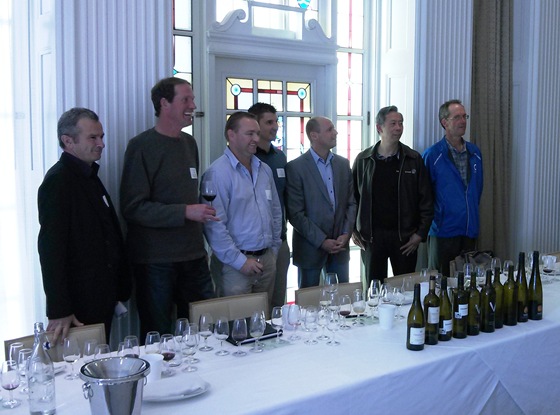 Tinhorn Creek’s President and Winemaker Sandra Oldfield was first to speak (as she had to leave early), alongside her Vineyard Manager Andrew Moon. In response to facilitator Anthony Gismondi’s query as to what she’ll remember the most about the 2012 vintage Sandra was quick to mention the two weeks of rain that soaked the valley at the end of harvest. That much sustained rain was a unique occurrence, but fortunately only set Tinhorn Creek back a slight amount as they don’t dry farm their vines any longer. Dry-farmed vines would have immediately absorbed all that water and drastically diluted the grapes and resulting wine. Sandra’s distaste for dry-framing was brought about in part due to the high tannin levels it historically yielded in her wines; now Tinhorn Creek carefully but deliberately water their 150 acres of vineyards by drip-irrigation (and steadily declining amounts of overhead irrigation).

Two new white wines from the 2012 vintage were offered as samples from Tinhorn Creek: the varietal Gewurztraminer will be officially released May first, and the “2Bench White” blend will follow in June. The Gewurztraminer comes from estate Golden Mile vineyards, and shows a lychee-heavy focus on fruit rather than floral notes (my preference); it was stainless steel fermented to yield less than 13% alcohol and a moderate 7 grams per liter of residual sugar. The 2Bench White is a popular and food-friendly blend of Chardonnay, Semillon, Sauvignon Blanc, Viognier, and Muscat Ottonel from both sides of the valley. It’s quite dry (only 2 g/L of sugar), fresh and clean, with a long finish of tree fruit flavours. No matter the year, there’s often a bottle of this versatile and dependable wine chilling in my fridge!

To cover vintage conditions in greater detail from the Black Sage Bench perspective were Sandhill’s Senior Winemaker Howard Soon and Viticulturist Nathan Goltz, who manages the Sandhill Estate Vineyard along with his father Robert. Following an illuminating historical overview of local growing-degree days Howard was sure to mention his philosophy of avoiding micromanagement in the vineyard, and his trust in experts like Nathan to take care of the vines properly until harvest. Nathan demonstrated his detailed approach with a lengthy discussion about leaf removal practices, and the unexpected complexities involved in balancing the choices involved.

Another new 2012 white wine was provided by Sandhill in the form of their varietal Sauvignon Blanc, already awarded a silver medal at the New World International Wine Competition in California. The winery reports the grapes were hand-harvested from the Black Sage Bench and whole cluster pressed to yield 1,200 cases coming out on May first. It has an obvious citrus and gooseberry nose, and a mellow tropical palate with few grassy influences. An appealing clean, relatively dry finish keeps the wine refreshing. Howard pointed out his preference for creating wines that pair well with local cuisine, such as the many BC seafood dishes that will mesh nicely with the Sauvignon Blanc.

Representing the Naramata Bench on the east side of Okanagan Lake was Renaissance man Robert Van Westen, who serves as both viticulturist and winemaker at his namesake winery Van Westen Vineyards (not to mention as an often-frustrated cherry farmer as well). Rob walked the audience through his many vineyard locations throughout Naramata: multiple small vineyard parcels keep him busy travelling back and forth along Naramata Road between at least five sites. He’ll have to work even harder this year given his assessment that spring is two weeks ahead of normal; combining that with a two-week delay recuperating from recent surgery puts him a month behind in his opinion.

Van Westen’s whites tend to be released later in the year than most: the Gold-medal-winning 2011 Viognier just came out in December. Rob managed to bring a tank sample of the 2012 Viognier however, and it’s already a very good wine, lush, supremely balanced, and awash in delicate tropical fruit and a hint of ginger – it’s going to be a long wait until this December! As if that wasn’t enough Rob also brought along his 2009 “V” red blend, so named as it is his first wine to contain all five Bordeaux varieties. Three hundred cases were released last fall, and despite the wine having nothing to do with the 2012 vintage it was quite welcome in my glass: fine tannins and chocolate flavours make it approachable already, despite the intense, long-lived reds Van Westen is known for.

Moving across the lake to Summerland we heard from Michael Bartier of Okanagan Crush Pad, along with Viticulturist Theo Siemens. They had brought tank samples of Haywire 2012 Switchback Vineyard Pinot Gris and 2011 Canyonview Vineyard Pinot Noir. Michael and Theo were proud to discuss the many environmentally-sustainable practices employed by OK Crush Pad, including the presence of vineyard chickens, and soon sheep! The vineyards have cut insecticide use completely in favour of encouraging beneficial insects via diverse flowering plants. In addition, the winery’s compost pile yields liquid “tea” that serves as an excellent fungicide, further reducing artificial chemical application. These practices have certainly succeeded in producing delicious wines: the Pinot Gris – fermented and aged as five unique lots before blending – is showing off a very nice nose of delicate tropical fruit and floral notes. The 2011 Pinot Noir is already very smooth, with flavours of red currants and cherries, but bright acidity on the palate will keep it fresh for some time, it having not even been formally bottled yet. Okanagan Crush Pad employs several concrete “egg” tanks, which is where the Pinot Noir is currently aging.

Our final panel member came from Kelowna’s Tantalus Vineyards: Viticulturist Warwick Davis joked that since all wine is made in the vineyard, there was no point in sending (Winemaker) David Paterson as well. In fact, David is currently working the Australian 2013 harvest, a practice not uncommon for worldly winemakers with experience timing their travel schedules. Warwick showed a map of Tantalus’ 50-acre estate vineyard surrounding their beautiful winery and tasting room, including some newly acquired neighbouring property being planted to Chardonnay. He was sure to mention the risks involved riding the sharp edge of deficit irrigation – maintaining the fine line between not enough and too much water is a constant balancing act. Although the vineyards may not be pretty, the old vines at Tantalus are still “trucking along” even though some are missing here and there – Riesling planted in 1978 makes up the vineyard backbone.

The 2012 and 2010 (Old Vines) Riesling from Tantalus were the final wines available to sample, and will likely be released within the next month. The “regular” 2012 Riesling is demonstrating an excellent balance between the 16 grams of sugar and 10 grams of acidity. Because 2012 was a warmer year tropical notes are more apparent than in previous vintages, but tart apples and citrus flavours form the fruit core. The Old Vines version from 2010 is soon to be released after extensive bottle aging, and showed somewhat lower sugar and higher acidity than the 2012 vintage in the neighbouring glass. Stronger petrol notes are apparent on the nose, and citrus flavours are dominant (as Warwick suggested, due to the cooler season that year). In this case, a vibrant, mouth-watering, honeyed finish provided for a delightful conclusion to the flight of wines.

My gratitude goes out to the BC Wine Institute for organizing such an informative panel discussion, and to the talented winemakers and viticulturists who attended for being so generous with their time. I look forward to enjoying more of the high-quality 2012 vintage over the coming months and years!