Sandwiched between the well known Naramata Bench to the north and the heavy hitters of Oliver-Osoyoos to the south, one might worry the wineries of Okanagan Falls could escape notice. In order to ensure that doesn’t happen the wineries from “The Heart of Wine Country” organized themselves into a winery association that was “years in the making” and covers wineries from Penticton to Vaseux Lake, representing 11% of the domestic wine bottled in BC. This week the young Okanagan Falls Winery Association held the Vancouver launch of their new press kit with a comprehensive tasting at Brix Restaurant in Yaletown. The results made it obvious that anyone who fails to pay attention to the dozen members of the Association is doing themselves a serious disservice, and missing out on some of BC’s tastiest wines! 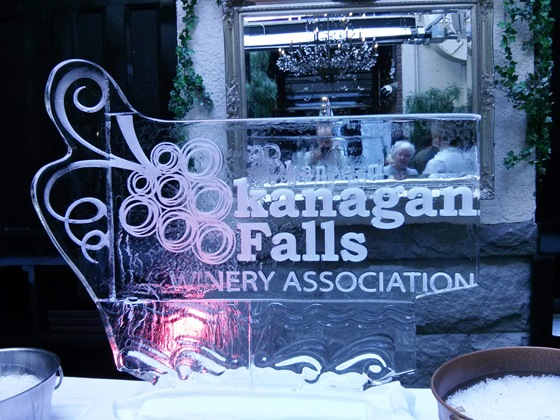 At Brix the wineries were organized at a dozen tables within the outer courtyard and restaurant interior, with most of the winery proprietors in attendance pouring a wide variety of wines. I was pleased to get another chance to enjoy Noble Ridge’s delicious “The One” traditional method sparkling wine, immediately followed by Blue Mountain’s NV Brut, a BC standard. Both sparkling wines were showing particularly well, and ideal for awakening my palate. Noble Ridge Proprietors Leslie and Jim D’Andrea were also sharing their creamy 2010 Chardonnay and big, bold 2009 Pinot Noir. Blue Mountain Sales & Marketing Manager Christie Mavety was showing off her family’s newly released 2011 Chardonnay and Pinot Noir, plus the 2011 Sauvignon Blanc, with great citrus-dominant fresh fruit flavours.

The Wild Goose table next door, out in the courtyard, was swamped for the most of the tasting, so I didn’t manage to taste any of the wines being poured by General Manager Roland Kruger. Judging by the crowds and the winery’s reputation I’m sure the new releases were going over very well, considering they included the 2011 Stoney Slope Riesling and 2012 Mystic River Gewurztraminer, plus 2010 Reserve Merlot. I’ll just have to visit the winery myself this summer, in the hopes that at least some of those particularly popular aromatic whites are still available!

Inside the restaurant Blasted Church Proprietors Evelyn and Chris Campbell and Winemaker Mark Wendenburg were making enthusiastic use of a portable tap dispensing their 2011 Hatfield’s Fuse white blend, and 2011 Big Bang Theory red blend. Both wines are very popular throughout BC via the “FreshTap” kegs that enable by-the-glass servings in restaurants and bars. Both 2011 wines were initially released earlier last year, so 2012 versions will be forthcoming soon, but in the meantime the Hatfield’s Fuse is showing soft fresh stone fruit flavours, and the Big Bang Theory has lots of easy-drinking berry flavours and floral hints. 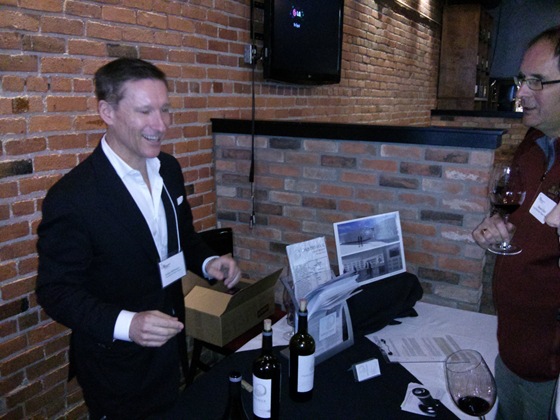 The always enthusiastic John Skinner was on hand pouring his remaining Painted Rock wines – the 2011 Chardonnay is sold out leaving him with no white at present. The 2012 Chard should be available soon, but you’d hardly have noticed any disappointment in John as he was busy showing off renderings of his long-awaited tasting room, finally under construction. John has spent the last few years putting all his energy and profits into the vineyards and winery, resisting the urge to splurge on a showpiece tasting room. Now that his winery and brand are firmly established he can proceed with a replacement for the small shed that has served customers since the winery opened. By mid-summer the gleaming new tasting room should be open and ready to serve guests and host events such as weddings, which will likely be clamouring for the Skaha Lake views.

At the Stag’s Hollow table owners Larry Gerelus and Linda Pruegger were pouring their very tasty 2012 Syrah Rose: a touch of Viognier amps up the aromatic nose and the strawberry flavours (and dry finish) put it on my shopping list immediately. The winery’s new 2010 vintage of their Cabernet-Merlot red blend “Heritage Block” was showing toasty smoke over a solid fruit core, and the 2010 Renaissance Merlot impressed with a full, but smooth, approachable texture. Of particular interest was the sample of the winery’s upcoming third wine in their ultra-small-lot “Cachet” series: Cachet #3 is a rich Merlot-Tempranillo blend with a touch of Cabernet Sauvignon, from the 2010 vintage, and should be released later this year. Once again, each bottle is hand-numbered, and they will probably be very hard to find outside the winery! 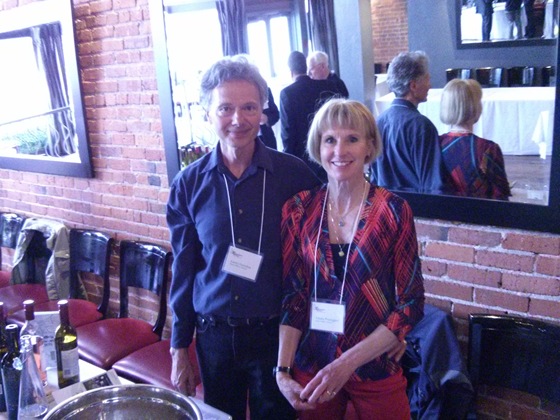 I spent a substantial amount of time at the table manned by Jak Meyer (the current Association President): his Meyer Family Vineyards Chardonnay and Pinot Noir is consistently superb, and they just keep getting better! Jak was not only pouring all of his single vineyard wines, but also his “Okanagan Valley” Chardonnay and Pinot Noir, the more economical multi-vineyard blends. That certainly isn’t to say that the Tribute or McLean Creek Chardonnays ($35), or Reimer or McLean Creek Pinot Noirs ($40) aren’t worth the price: the Chardonnays show very well-integrated oak, with bright acidity and excellent balance, and the Pinot Noirs are earthy and full-bodied. Meyer has a handy wine club that offers access to all of the wines in three annual shipments: it’s probably the best way to acquire many of these small-lot wines if you can’t make it to the winery in Okanagan Falls.

With “only” a dozen wineries present one would think there was enough time to visit them all, but I regretfully had to quickly skim through the portfolios of a few, and missed one of them entirely! Fortunately I’ll get a chance to visit Liquidity Wines this summer, hopefully just in time to enjoy their brand new tasting room, and finally try some of their wines. Knowing the estate vineyards have been selling grapes for over twenty years before the new owners started a winery in time for the 2012 vintage certainly piques my curiosity.

I was at least able to taste some of the wines from the remaining wineries, and was impressed by Kraze Legz’ clean and crisp Pinot Blanc and refreshing Merlot Rose, as well as the strawberry-flavoured “Cake Walk” Merlot. From the See Ya Later Ranch portfolio I enjoyed the value found in the very easy-drinking 2011 “Jimmy My Pal” white blend ($16), and the soft, dark fruit of the 2010 “Ping” Cabernet-Merlot. Family-run winery Synchromesh (named by auto-enthusiasts) had a slew of Rieslings open across three vintages from 2010 to 2012. The 55 grams of residual sugar found in the 2011 Black Label Riesling was certainly eye-opening, but still in decent balance with the acidity. Thematic nomenclature continued with Topshelf Winery, clearly the domain of hockey enthusiasts: each bottle being poured by owners (and hockey parents) Leonard & Myra Kwiatkowski features prominent goalie mask artwork! The Kwiatkowski’s were pouring their 2011 Pinot Gris, a bright 2011 Chardonnay called “Slapshot”, and an earthy, soft 2011 Merlot named “Over the Top”.

It’s great to see the diverse Okanagan Falls wineries finally organize themselves into a trade association. Working together will undoubtedly help to raise the profiles of all the member wineries; they certainly made an impression on the assembled guests at Brix. Having visited a few of these wineries previously, including during last year’s BCWAS Bus Tour, I’m looking forward to returning this summer to share the region’s beautiful vistas and wide variety of wines with my family. Thanks to the Okanagan Falls Winery Association for refreshing my memory!