Last week’s tasting saw much of the team from Blasted Church join the BC Wine Appreciation Society for another sold out event. The Society was joined by winery owners Evelyn and Chris Campbell along with Winemaker Mark Wendenburg and the winery’s two dedicated sales representatives, Brent Hayman and Derrick Cousins. Together the five of them were able to answer any and all questions about the history and practices of Blasted Church, and the exciting wines available for us to sample.

Blasted Church produces a broad portfolio of wines ranging from sparkling to Port-style, including more than a dozen table wine varietals and blends. However, the Campbells decided our tasting would be the perfect opportunity to investigate the pedigree of their Chardonnay and Merlot in greater depth, via two vertical tastings covering much of the last decade.

Before sampling from a five-year Reserve Chardonnay vertical, and a seven-year Merlot vertical, we were all treated with a special preview of the winery’s upcoming 2011 “OMG” Sparkling Wine. Having previously produced only one vintage of sparkling, from 2008, it is no coincidence that the winery is ramping up their sparkling program now that new winemaker Mark has arrived. Mark spent two decades collecting accolades at Sumac Ridge Winery, well known for their “Steller’s Jay” sparkling wine.

Mark joined Blasted Church in the spring of 2011, and wasted little time preparing the second release of OMG from that fall’s vintage, to be officially released later this year after two years of fermentation and aging. The sample bottles brought to us from the winery weren’t even labelled yet, as they are still several months from release, but the traditional method blend of Chardonnay, Pinot Blanc, and Pinot Noir introduced itself just fine. With a slight pinkish tint from the Pinot Noir, the wine showed a very crisp, fine mousse and delicious peach pie flavours following clean linen aromas. Although only 77 cases of the 2008 OMG were produced, there should be more 2011, and the program will no doubt continue to grow in the years to come. 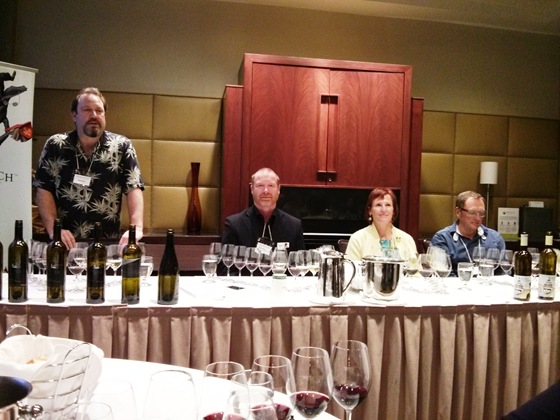 Although I’m sure the Blasted Church team could have continued speaking about their exciting upcoming wines, we conceded it was time to move on to the next dozen glasses in front of us, knowing how quickly BCWAS tastings can fly by! The first vertical consisted of the 2004 to 2008 vintages of the “Revered Series” (Reserve) Chardonnay, no longer produced. One can imagine the sparkling program requires greater amounts of Chardonnay grapes, which may have necessitated the transition. The Revered Chardonnay was always produced in very small quantities – half a dozen barrels at most, according to Brent, with whom I conveniently shared a table. Now the winery focuses on producing several hundred cases annually of an off-dry varietal Chardonnay Musqué, named “Unorthodox Chardonnay”.

Tasting five vintages of the Revered Chardonnay was a very rare treat, given its production status. Beginning with the 2004 I was quite impressed by how much fruit was retained on the palate. The wine still smelled clean and fresh, with moderate oak on the nose. Unexpectedly, the 2004 would ultimately come out on top as the crowd favourite of the flight.

Moving through the remainder of the vertical I found the 2005 a bit thicker in texture (although the malolactic component of the 2004 had been evident), with a more restrained nose than its predecessor. The 2006 initially expressed a bit of acetone on the nose and a hint of oxidation that reminded me of Sherry, but over time honey aromas expressed themselves and a strong melon flavour emerged. My personal favourite was the 2007, with a toasty nose and fruity undertones, plus an acidic bite that kept it vibrant on the palate. Lastly, as one would expect, the 2008 showed the most fresh, floral nose, along with mixed tree fruit flavours. It really was quite an exploration overall! 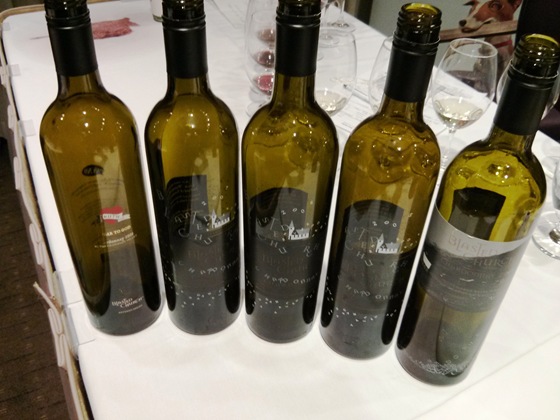 Although everyone was still debating their favourite Chardonnay we couldn’t ignore the seven remaining glasses of Merlot ahead of us. Starting with the winery’s first release from 2002 I was immediately impressed by how aromatic it presented after nearly a decade in bottle. A dark rusty colour yielded to mature, Porty aromas, while on the palate brisk acidity was found to be keeping it lively.

After the winery’s first winemaker Frank Supernak tragically passed away during the 2002 crush Blasted Church brought in South African winemaker Willems Grobbelaar for 2003, the year of the infamous Okanagan wildfires. The 2003 Merlot certainly seemed affected by the smoky conditions that year, showing what I found to be a leathery nose with elements of eraser rubber and paint; not ideal but an unavoidable reality that year. By 2004 another new winemaker was needed when Willems was unable to extend his work visa, and Australian Marcus Ansems joined the team (only to leave the next year!) to produce a dry, dark-cherry-flavoured Merlot, which was showing moderate tannins.

The 2005 and 2006 vintages were produced by Kelly Moss after she left Calona Vineyards (where she was trained under Howard Soon). Upon tasting the wines I found that both showed more fruit on the nose, with smooth tannins and cranberry/cherry flavours; the fresh and fruity 2006 was probably my favourite of the vertical in fact. The remaining two glasses came from the hands of Richard Kanazawa, winemaker for the 2007-2010 vintages, who took over when Kelly moved back to Ontario. Both 2007 and 2008 wines were quite young, with plenty of tannin present, showing that Blasted Church’s Merlot needs quite a bit of time to come into its own. That being said, Sales Representative Brent confided to me that 2009 was the best Merlot yet in his opinion, but regretfully it was not available for our tasting.

Consumers will have the chance to try Mark’s take on Blasted Church Merlot once the 2011 vintage is released later this year. It’s doubtful a six-winemaker vertical (2002-2011) will ever be tasted in public, but it was challenging enough diligently working our way through seven years! Much gratitude goes to Evelyn and Chris for so generously opening their library of wines to us, and to Mark for introducing us to his sparkling wine and the promises his talents bring to Blasted Church’s many fans in the years to come.