After a great deal of lobbying by some very hardworking people in the local wine and hospitality industry, the North American Wine Bloggers Conference came to Canada this year for the first time, setting up shop in Penticton to be precise. For people in the know, this was a very big deal, and a valuable opportunity to provide our relatively small local industry with international exposure. I originally wasn’t going to attend the Conference myself, given that I was unlikely to discover any BC wines with which I wasn’t already familiar. I expected the focus of the conference would be to show off BC wine and wine tourism to those with next to no experience, and I was fine with that approach. However, after seeing how many other local bloggers and industry friends were to be attending I changed my mind. Upon reading the list of events and realizing I would be following all of the enthusiastic tweets from home it became clear I would probably sprain an ankle kicking myself if I didn’t attend.

With a room booked at the Penticton Lakeside Resort and an empty trunk begging for wine in our rental SUV, my wife and I set off for wine country last Thursday morning. My goal was to head north via the Coquihalla Highway, and enjoy lunch at Mission Hill’s Terrace Restaurant, which I had visited for the first time last fall, and was quite eager to share. Upon arrival in West Kelowna the excellent food and the stellar views did not disappoint, and we even bumped into a former staff member from Village Wines Kitsilano; now a Sommelier in the Mission Hill wine shop, she generously walked us through a short but exciting Oculus vertical. 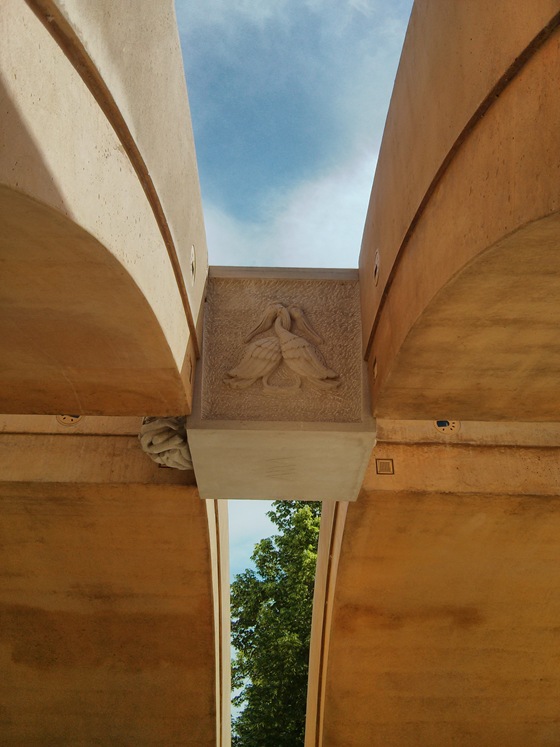 Headed south towards Penticton I knew we had to make a couple of stops along the way. I’d recently been quite surprised to see Summerland’s Silkscarf Winery take home the award for Best Cabernet Sauvignon at the Okanagan Spring Wine Festival, and couldn’t pass up the opportunity to try it out in person. It being early afternoon on a Thursday we had the tasting room to ourselves for most of our visit, and Proprietor/Winemaker Roie Manoff was more than happy to show off his many wines. While virtually everything was excellent, we were particularly impressed by the reds, having previously perceived Silkscarf as a more white-wine-focused operation. Estate plantings of Cabernet Sauvignon, Malbec, and Syrah in Summerland must be few and far between, but the Manoff family is producing highly drinkable reds with ripe tannins and intense fruit focus. We left with plenty of wine and new appreciation for a previously lesser known winery – WBC was paying off already!

With the afternoon heating up rapidly and a desire to reach home base in Penticton growing, we elected on only one more stop, although it was already a given we would visit 8th Generation. We’ve both been big fans of 8th Generation’s Frizzante(s) since the very first Chardonnay Frizzante from 2009. Tasting both the 2012 Integrity (White) and Confidence (Rosé) Frizzante we knew it was a particularly good vintage, and a split-case quickly found its way into the car. The Frizzante was joined by several bottles of the 2012 Pinot Meunier Rosé, an annual favourite in our household that has continued to impress this year with mouth-watering fresh fruit flavours.

With more than two cases of wine already rattling around in the car we finally checked into the hotel and picked up our conference badges, settling into our lovely sixth floor, lake view room – very nice! While catching up with a great many friends at the tradeshow we also enjoyed samples of unique Uruguayan wines. The fact that Wines of Uruguay had gone to the trouble of attending – given what must have been mounds of paperwork – was impressive enough, yet the wines being poured were also noteworthy. I learned quite a bit about Uruguay itself, as well as the extremely prosperous and sustainable economy of this little South American dynamo! Just as our stomachs started to rumble everyone was herded onto buses for the trip to our first major event, the opening reception at See Ya Later Ranch in the hills above Okanagan Falls. 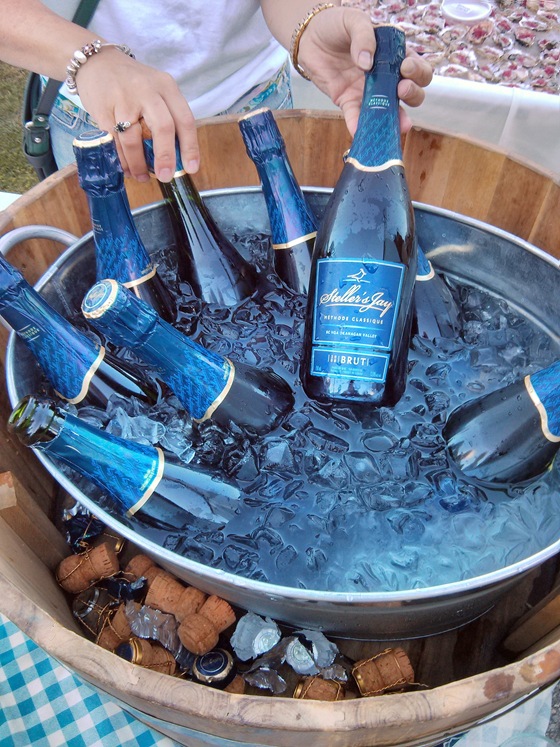 The crew from Constellation Brands, corporate owners of See Ya Later and several other local wineries, had obviously pulled out all the stops from their deep pockets to welcome the Conference attendees. Upon arrival after the precarious journey up winding mountain roads guests were invited to soothe their senses with crisp Sumac Ridge Steller’s Jay Brut (and freshly shucked oysters for good measure). Constellation made the very wise decision to hire Joy Road Catering to provide the food, distributed amongst several stations spread throughout the picturesque property. The extremely skilled veterans at Joy Road had prepared a bevy of spectacular food pairings for wines from Jackson-Triggs, Inniskillin, Nk’Mip Cellars, Osoyoos Larose, See Ya Later, and Sumac Ridge. Not only was the food incredibly creative and delicious, but each station included live entertainment, from the quaint accordion player at Osoyoos Larose, to the talented Aboriginal drummer and dancer at Nk’Mip’s table amongst the vines.

The party went long into the night, as guests devoured the seemingly never-ending food and enjoyed what, for many, was their first deep immersion into BC wine. The local classic car club had swung by to show off their lovingly restored vehicles, and even Tinhorn Creek President Sandra Oldfield had joined the fun with her beautiful 1957 Dodge De Soto. Upon discovering the De Soto’s trunk was large enough to hold an orchestra a few of us locals giddily staged a series of photo-shoots inside, to Sandra’s delight. Finally, full of wine, including Inniskillin icewine and sumptuous desserts from the final station, everyone slowly boarded buses in the dark for the ride back to Penticton. Constellation made sure no one left without a gift bag however, which surprisingly included a whole bottle of Sumac Ridge’s Black Sage Vineyard Pipe! I hope our international guests found room in their bags to bring home this tasty fortified wine, but I would guess more than a few bottles were enjoyed significantly sooner, for practical reasons if anything. 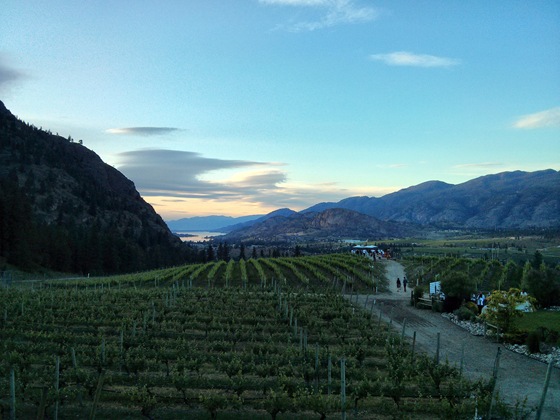 The next morning we slowly emerged from the bed, encouraged by the breakfast opportunities at the Resort’s waterfront restaurant, The Hooded Merganser. For guests who officially decline all housekeeping services, the hotel offers food vouchers that go a long way towards covering breakfast or lunch – an excellent value proposition that I would love to see more often! We enjoyed a tasty breakfast with a gorgeous view of the lake before going our separate ways for the day: my wife had work on which to catch up, and I was about to play hooky from the Conference for the morning! Although I’m sure author and keynote speaker James Conaway kept the crowd entertained, I was busy taking advantage of my presence in the midst of countless superb wineries I don’t visit nearly often enough.

My first stop that morning was actually the Penticton Wine Information Centre, a large VQA wine store which I surmised would carry some of the rarities not often seen in Vancouver. My suspicions were proven correct when I spotted exciting sparkling wines like Haywire’s “The Bub” and Covert Farms’ “Odie” plus a couple bottles of Desert Hill’s port-style wine “The Ambassador”. Unlike many VQA stores, which are often pressed for space, the Wine Info Centre has a wall of coolers from which to sell nicely chilled whites as well; quite an impressive setup overall. There are always a number of wines that don’t show up in VQA stores for various reasons, and so my next stops at Poplar Grove and La Frenz helped to tick quite a few bottles off my to-buy list as well, including several bottles of the latter’s divine Tawny, and Liqueur Muscat. Although many more wineries up the Naramata Bench beckoned, it was nearly noon and I retreated to the hotel for a tasty lunch sponsored by Wine Country Ontario. 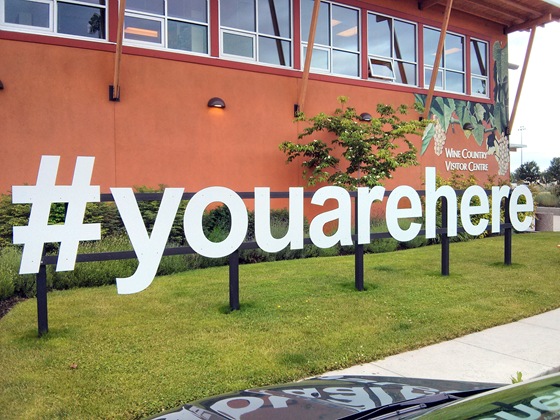 Tempting as the local wineries were, I took the time to attend the afternoon sessions, including “Creating Compelling Content” with local writer Jeannette Montgomery, plus American contributors Michael Wangbickler and Marcy Gordon. It was an entertaining, informative, and inspiring discussion about blogging and writing in general. Following the afternoon content sessions there was an hour of “Live Wine Blogging” featuring local white wines, of which I regretfully missed out on a good portion. Eager to strike out without delay on the evening mystery excursions I was busy freshening up until halfway through the Live Blogging. Admittedly, I thought the format would involve the bloggers rotating amongst stations, but to my surprise the bloggers stayed put and the winemakers and wines rotated between two dozen tables every five minutes, speed-dating style. As a result I wasn’t able to catch up on the wines I missed when I finally arrived, but I still got the chance to enjoy several crisp summer whites, and watch some very hardworking wine-slingers in action!

At the conclusion of the Live Blogging, the Excursion melee began in earnest, as five buses headed to mystery destinations awaited riders.  Although I had already surmised precisely where each bus was travelling based on the provided itinerary hints and my local knowledge, many conference-goers hadn’t a clue, and once each bus filled up it departed post-haste! Fortunately my wife had finished work for the day and joined me on the bus headed to explore “Wine & Geology”, where we were about to relish a fun-filled evening and spectacular dinner in a wonderfully unique location. To be continued…