After a day spent indoors for most Conference participants there was an eagerness to get outside and enjoy the beautiful Okanagan summer weather. I had already snuck out to visit a couple wineries in the morning, but was just as excited to depart on the bus for our mystery excursion to feature “wine & geology”. To be honest I had already surmised the excursion would be visiting the beautiful Similkameen Valley, and that we’d be dining at a very special new location, which is why I’d hustled to get on board that particular bus! Joining me were my wife and a blogger friend of ours from Vancouver, plus plenty more friendly faces I recognized throughout the full busload. Under the enthusiastic leadership of Kim Lawton from the Similkameen Wineries Association, we took off for Keremeos and our first stop.

After an exciting trip through Marron Valley via Kaleden and Highway 3A we arrived in Keremeos from the north and pulled into the Grist Mill Heritage Site. This functioning flour mill, with original machinery intact, was built in 1877 and is the last remaining site of its kind in Western Canada. Inside the Visitor Centre we were greeted with sparkling wine from Orofino Vineyards and Rustic Roots, along with fresh oysters and other treats to enjoy on our tour of the grounds. The lush gardens and swiftly rushing creek provided for a relaxing venue to chat and begin an introduction to the Similkameen. Still, it wasn’t long before we were off to our dinner destination at Seven Stones, with everyone’s palates refreshed and ready for more! 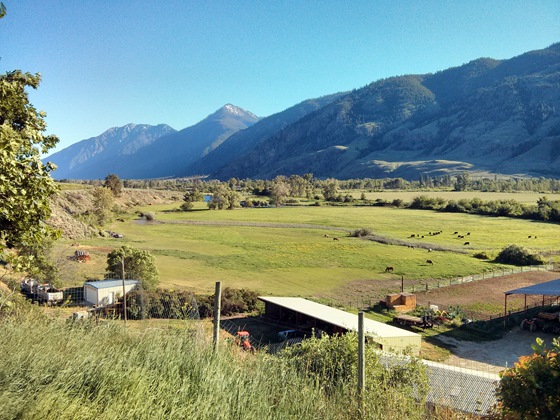 We zipped down the Crowsnest Highway through Cawston to reach Seven Stones, one of the southernmost wineries in the valley (outdone only by Vineglass and Forbidden Fruit, nearly at the American border). At George Hanson’s beautifully-sited winery the entire Similkameen Wineries Association was awaiting us, with such a bevy of wines from the nine wineries one could scarcely count them all, let alone taste them! That’s not to say the group didn’t try, as each winery proprietor was present to convey their unique story and pour in person. The bloggers were divided amongst three groups, and alternately toured the property with George or explored the terrain of the region with trained geologist Dale Wright of Eau Vivre Winery. Tasting through the wonderfully varied wines of the Similkameen – from fruit frizzantes to bold Cabernet Sauvignon – was certainly a cherished moment, yet the high point of the tour was exploring George’s brand new wine cave.

The multi-wing concrete caves extending underneath Seven Stones are nearing completion, and George was only too happy to show off what should soon be one of the premier wine-tourism destinations in the Similkameen. Although one wing will store Seven Stones’ many barrels (and connects directly to George’s home), a second wing has a promising future as a highly desirable event space, including a commercial kitchen and a full suite of lighting and sound. It was in that enigmatic locale that Chef Chris Van Hooydonk of Artisan Culinary Concepts was preparing a tapas feast for dinner. Guests still tasting upstairs needn’t have worried, as every remaining bottle was ferried down to the cave where we could all help ourselves with dinner! As good as the wine was, it was almost outshone by Chef Van Hooydonk’s spectacular spread of food, of which not a single crumb could be found at the end of the evening. 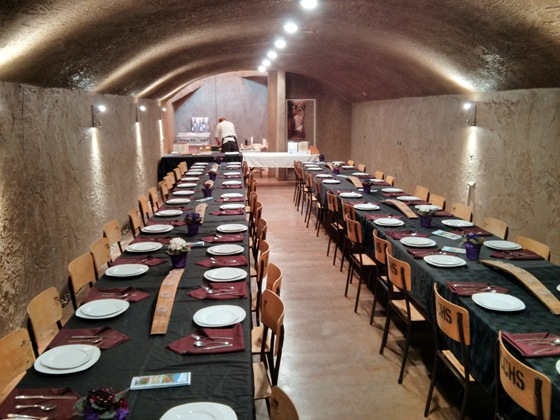 Amongst a great many thanks and congratulations to our hosts, it took quite a while to round up the bloggers for our departure to a reception with the four other excursion troops. We reunited with our compatriots at Spirit Ridge Resort, home of the celebrated Nk’Mip Cellars, for a rooftop party hosted by the Oliver-Osoyoos Winery Association. As the sun set we cavorted late into the night, and did our best to keep anchored in the increasingly-amusing windy weather. No doubt the staff at Spirit Ridge weren’t amused by how many broken glasses resulted from the table-clearing gusts, but the conditions certainly kept things exciting! Once again we were gracefully chauffeured back to Penticton Lakeside Resort for more after-hours parties and some solid sleep for the wisest among us.

Saturday morning began with a luxurious breakfast in Gyro Park across the street from the hotel, organized by the Downtown Penticton Business Association. With everything from fresh crepes to mouth-watering pastries and savoury breakfast wraps there was something for everyone, regardless of their waking state. I myself fuelled up for the day, given that I would be spending the morning wine touring once again, and had even corrupted a fellow blogger into joining me! My wife was to spend the day gallivanting with several friends on a bachelorette party weekend which just happened to coincide – geographically and chronologically – with the Conference, so we dropped her off in Naramata and set out with shopping list in hand.

Stops at Elephant Island and Kettle Valley produced some key acquisitions, and we even auspiciously spotted Robert Van Westen erecting his road-side sign, prompting another winery visit. Rob was even kind enough to treat us to a barrel sample of his upcoming 2012 Pinot Noir, which should easily match the superb quality found in the 2011 “VD” collaboration with Tom Di Bello. Before returning to the hotel for lunch and afternoon sessions we enjoyed a leisurely tasting on the patio at Laughing Stock, where I picked up my latest Preferred Share Wine Club allotment. Tasting both the 2011 Syrah and Blind Trust Red I was quite pleased to be taking home three bottles of each of these finely crafted and very promising red wines.

Back in Penticton my fellow blogger and I caught the tail end of lunch with Wines of Uruguay, and committed to attending the afternoon sessions, including the enticingly-named “Drink Them Before They’re Famous”. That breakout session hosted by Master Sommelier George Miliotes introduced us to a stunningly good custom Gamay that had not yet been tasted by anyone beyond the development team. An introduction to Canadian icewine from Inniskillin came next, with some remarkable story-telling by guest speaker Randy Picton, Winemaker at Nk’Mip. Randy recounted the spectacular longevity of an open bottle of icewine he kept in his laboratory fridge for years, prompting a few attendees to recork the sample bottles throughout the room and slip them into satchels for later! We immediately moved into the next “Live Wine Blogging” segment, featuring many high end local reds, and of which I was sure to participate in full this time, to much relief and enjoyment. Lastly, New Wines of Greece hosted a lengthy pre-dinner reception featuring a slew of educational opportunities for those of us – myself included – who had yet to taste from grapes with names like Assyrtiko and Xinomavro. 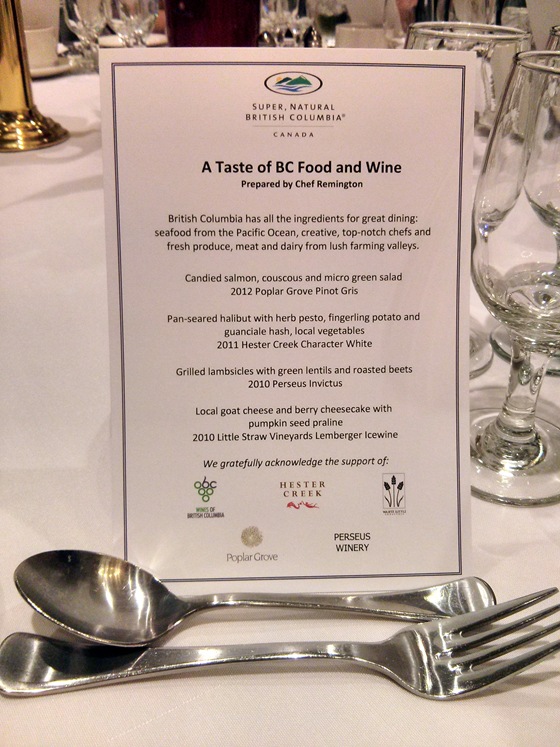 The closing dinner prepared by the Resort’s Head Chef Chris Remington required the challenging selection of only four wines from the myriad wineries represented at the Conference. Poplar Grove’s highly respected Pinot Gris was a nice match for the first course of candied salmon, while the second course halibut sang with Hester Creek’s Character White blend. Hopefully those present were able to appreciate the inclusion of the Okanagan’s only Trebbiano grapes (from 45-year-old vines no less) in the Character White, alongside Pinot Gris, Chardonnay, and Pinot Blanc. Penticton’s “in-town” winery Perseus, within walking distance of the hotel, was tapped for their full-bodied Invictus red blend to pair with lamb and lentils. Although I skipped the lamb in favour of more lentils and roasted beets I had no trouble enjoying the dark, ripe fruit found within the predominantly Merlot and Cabernet Sauvignon of the Invictus. Our final course consisted of generously portioned cheesecake and the unexpected Lemberger Icewine of West Kelowna’s Little Straw Vineyards. An individual 50mL bottle for every diner revealed delicious fresh, clean berry fruit flavours, and likely prompted some unique wine journal entries as well.

After several hilarious skits and the conclusion of the Wine Blog Awards, some well deserved applause for the Conference organizers acknowledged the passion that brought WBC13 to Penticton in the first place. It was then revealed that next year’s Conference will be held in Buellton, California, where attendees will enjoy the wines of over 100 members of the Santa Barbara County Vintners’ Association. Just like that the 2013 Conference was over: I’m so glad I made the decision to attend, which in retrospect I can scarcely believe was even in question! Fortunately for my wife and I the adventure was to continue for one more night in the Okanagan, with a luxurious stay at Hester Creek’s Villa coming up next!