After a comprehensive tour through the Oliver-Osoyoos region last year, the BC Wine Appreciation Society bus tour swung north in 2013 to visit Summerland and the Naramata Bench. The Executive team had arranged luxurious accommodations at Summerland Waterfront Resort, where most of us met up Friday before the tour started in earnest the next morning. The well-appointed resort directly on the water is also the site of Local Lounge & Grill, where we were set to dine throughout the weekend. The highly-respected restaurant is operated by Christa-Lee McWatters and her husband Cameron Bond, in partnership with Christa-Lee’s father, Harry McWatters. The convenience of dining directly at the resort allowed guests more flexibility, and saved money on transportation as well! 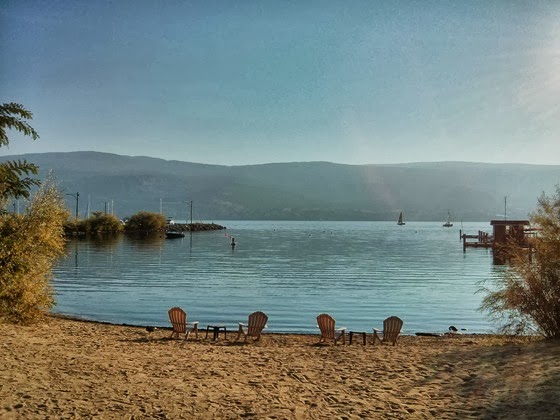 For BCWAS members arriving Friday evening, Local was set up to welcome us with a festival style wine tasting, alongside a tapas dinner from talented new Executive Chef Lee Humphries. Several members wineries from the “Bottleneck Drive” association in Summerland were present pouring for the excited guests, with everything from crisp sparkling wines to rich fortifieds and icewines. Naturally, everything was available to order as well, with the wineries generously offering to deliver orders to the hotel’s front desk the next day. Given the many excellent wines being poured I certainly hope they received plenty of new customers.

As good as the great many wines were, the seemingly endless array of food easily grabbed our attention as well: platters of cheese and charcuterie were accompanied by a bevy of bite sized hors d’oeuvres on skewers, planted in a bed of living greenery. The quail eggs, prawns, seared tuna, and tomato & bocconcini morsels kept guests salivating while Chef Lee cooked up mini meatballs and squash tortellini at a hot food station. A table of desserts didn’t go missed either, with pies, brownies, éclairs, and chocolate mousses offering a feast for the senses late into the evening. 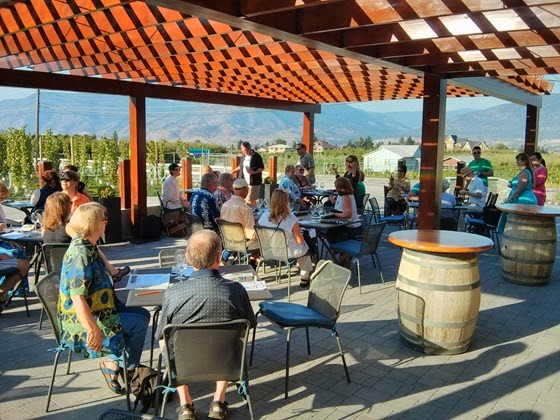 Despite a hearty party to get us started, everyone dutifully reported outside the resort on Saturday morning at 8:15 for our departure to visit the Naramata Bench wineries, helped along by plenty of coffee, and/or sparkling wine in a number of cases! A short ways down the road in Penticton Upper Bench Winery & Creamery was ready to receive more than three dozen bright-eyed wine (and cheese) fans. Proprietors Gavin Miller (the winemaker) and Shana Miller (the cheesemaker) welcomed us to their newly renovated patio, where we all enjoyed a seated wine and cheese tasting. 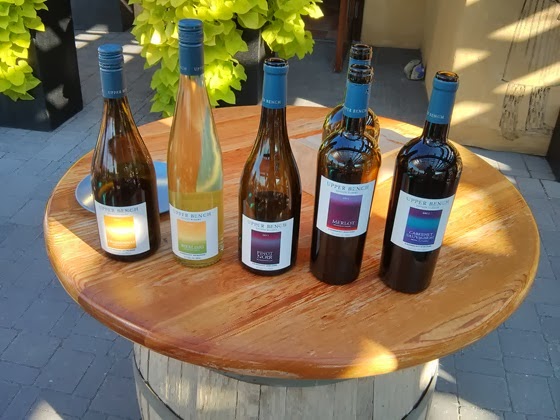 Elegant Chardonnay and crisp Riesling were paired with Shana’s “Gold” and “French Gold” cheeses to start, while industry veteran Gavin discussed his all-natural viticultural approach. A hearty new 2011 Pinot Noir was accompanied by the garlicky “Italian Gold” cheese, and the fruit forward Merlot and old world inspired Cabernet Sauvignon brought out the “Moody Cow” and “King Cole” blue cheeses. The impressive selection of wines and cheeses set Society members upon the tasting room in droves, stocking up on their favourites in both domains. It didn’t take long for the previously-burgeoning cheese fridge in the shop to look quite forlorn and lonely once we practically emptied it in our enthusiasm for Shana’s wares! 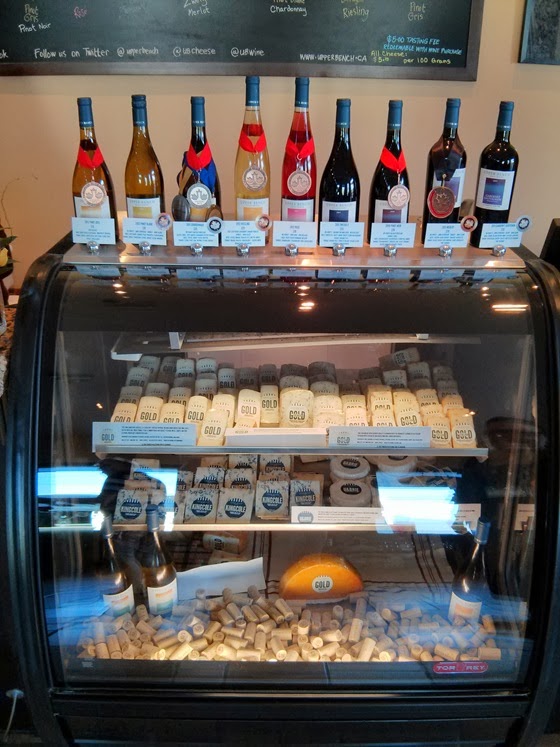 With the Naramata Bench wineries so close together it wasn’t long before we reached our next destination, mere minutes away at Poplar Grove’s production facility, down the road from their iconic Tasting Room. There, Founder Ian Sutherland was on hand to greet us and provide a guided tour of the new winery, about to enter its second year of production. The extremely spacious building is home to dozens of massive steel tanks and a huge barrel room that should serve Poplar Grove and second-label Monster Vineyards well for many years. 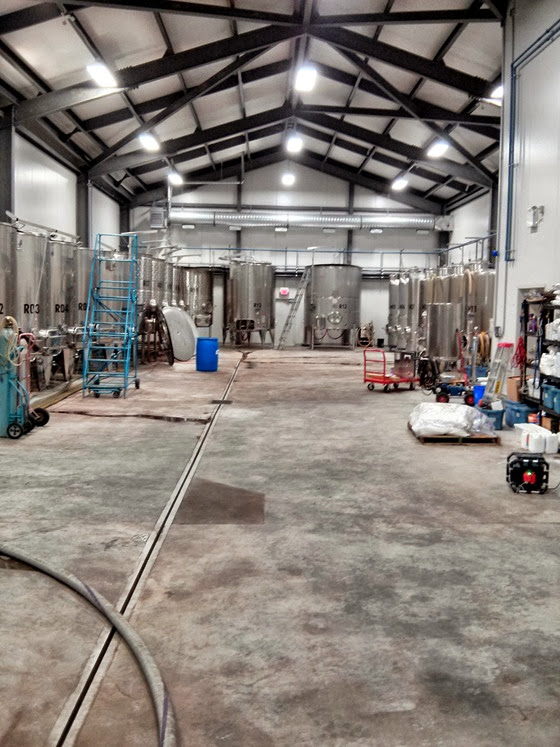 After a quick hop up the road to the beautiful tasting room and event facility Ian was happy to share and discuss several wine samples, including a smooth and balanced Chardonnay, plus a rare and luscious Viognier found only at the winery. The 2009 Cabernet Sauvignon and the 2009 CSM red blend soon brought on plenty of grins with their ripe dark fruit, and the nicely maturing 2006 Legacy provided for a delectable treat. 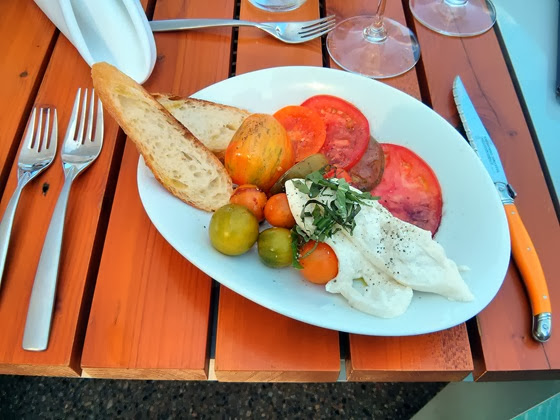 With Poplar Grove having been joined by the Vanilla Pod Restaurant from Summerland just last year, we were able to smoothly transition directly into lunch, served outside amongst the stunning views overlooking Penticton and the lake. Executive Chef Bruno Terroso had prepared a spectacular three-course meal, beginning with an extremely flavourful heirloom tomato salad with fresh Burrata. 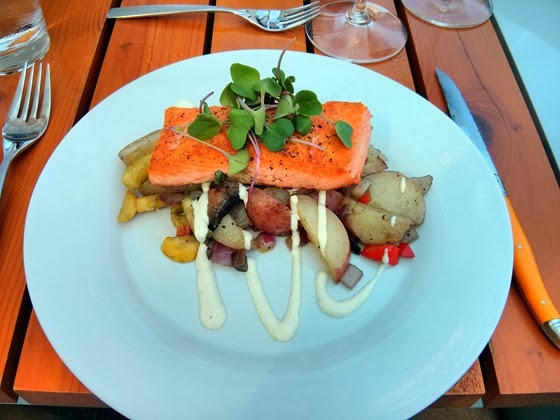 Summerland potatoes and squash were next, served with either Hanger Steak or Wild Soho Salmon, similarly mouth-wateringly fresh and honestly prepared. Finally, the flourless chocolate torte for dessert was so rich and delicious that members were pooling their leftovers in take-away containers, so as not to leave even a single bite behind! 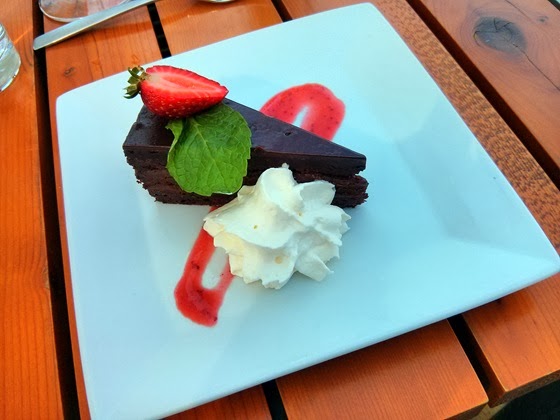 With memories of such a fantastic lunch still in our minds (and bellies) it was almost hard to concentrate during our afternoon visit to Township 7. Winemaker Bradley Cooper met us outside the winery where a series of tables had been set up for a custom blending session. After pouring the 2010 Reserve 7 Meritage, Brad challenged us to form small groups and create our own unique blend out of six single vineyard samples from the 2012 vintage. 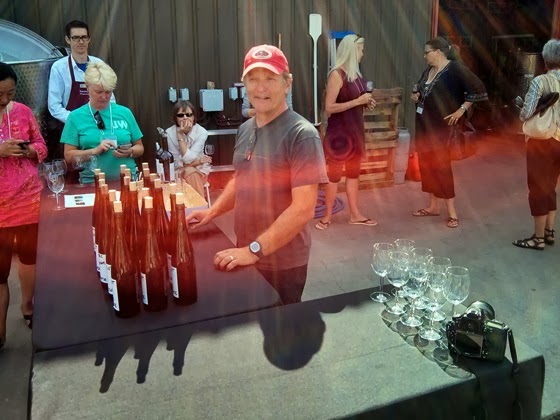 With a full suite of flasks and beakers on hand, we masterfully crafted three Merlots, Cabernet Franc, Cabernet Sauvignon, and a Malbec/Petit Verdot field blend into several brand new wines, under the watchful eye, nose, and palate of Brad. Many gleeful amateur winemakers soon received Brad’s approving acknowledgement of their blends, which he recorded for future research and consideration during his own blending sessions for the 2012 Reserve 7. 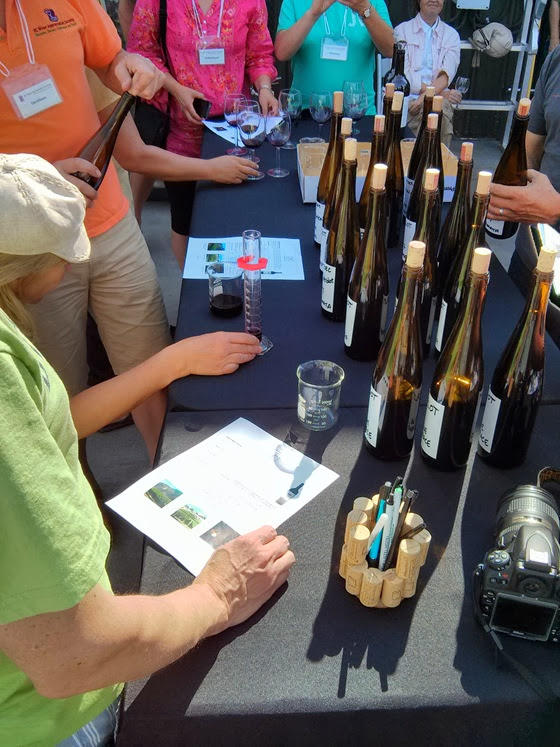 Our final winery visit of the day took us up the road to Red Rooster, where the winery was hosting a fundraising picnic afternoon for the Penticton Fire Department. Outdoor games, a petting zoo, and actual firefighters demonstrating their life-saving equipment were all on display. With the winery grounds crowded with families and wine fans, we journeyed upstairs to a private room for a guided wine tasting with hospitality associate Dale. 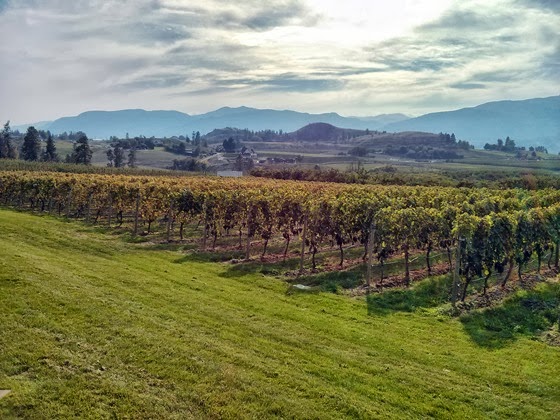 Several wines from Red Rooster’s portfolio gave us a crash course in the techniques and skill of Winemaker Karen Gillis. We were lucky to sample from small lot, Reserve wines such as the Lieutenant Governor’s Award-winning 2012 Viognier, the rare 2011 Pinot Noir, and the newly released 2011 Malbec. The winery’s generosity continued as Dale provided samples of the light, refreshing 2012 Riesling Icewine, and the restrained, age-worthy 2010 “Golden Egg”, Karen’s venue for experimenting with Mourvedre and Grenache. 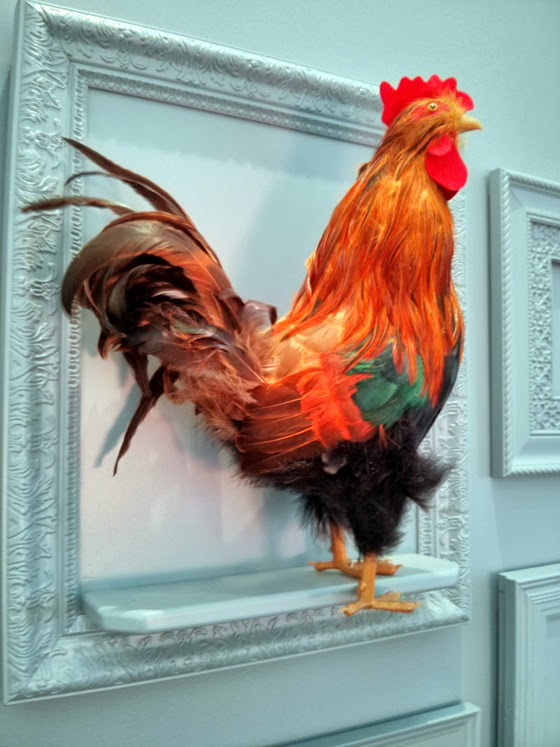 Back at the Resort, we enjoyed some time off to collect ourselves and squirrel away our purchases of wine and cheese from the day. The evening’s dinner at Local saw us honoured with the company of two well-known local winemakers: Tom Di Bello and his wife Tari joined Robert Van Westen in introducing several wines from their individual and joint ventures. Tom’s small “Di Bello Wines” project has yielded exceptional Chardonnay, Viognier, Merlot, and Syrah thus far, but is temporarily on hold as he ramps up work as the new head winemaker at Burrowing Owl. The busy harvest season didn’t stop Tom and Tari from bringing their 2010 & 2011 Chardonnay and Merlot wines, plus the 2010 Syrah, all ready to be paired with Chef Lee’s delicious food. 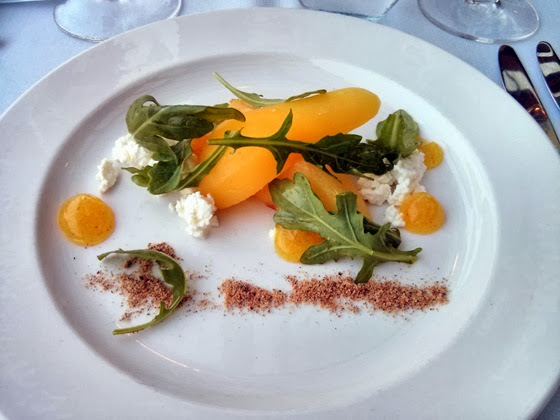 The first course of Poached Pear Salad with Goat’s Cheese paired nicely with both Chardonnays, each of which possess bright, food-friendly acidity. The second course of Bison Tartar was enjoyed with the 2011 “VD” Pinot Noir, a very successful collaboration between Tom and Rob, and of which fewer than 100 cases were produced. Rob revealed his initial anxiety at producing a Pinot Noir, given the passion with which fans of the variety can both celebrate excellence and condemn perceived failure. Fortunately Tom convinced him to take the chance, and they have continued to collaborate on subsequent vintages. A third course of Duck Confit Ravioli served to celebrate both vintages of Di Bello Merlot, and juicy Syrah synched up with Roasted Black Pepper Venison next. 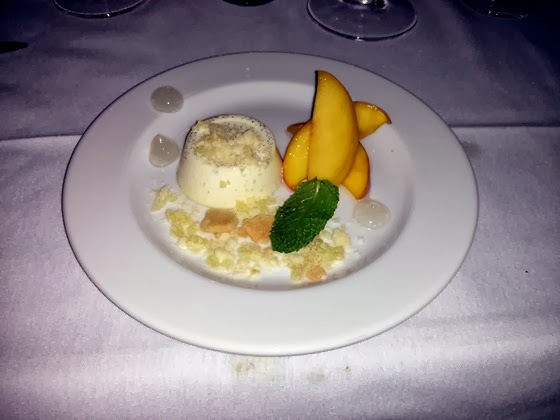 A highlight of the entire meal for many was the dessert course of Qualicum Brie Pannacotta with the exquisite 2012 Van Westen “Vicicle” Viognier icewine. The honeyed peach and apricot flavours of the wine meshed superbly with the added rosewater honey gel and candied ginger sable crumble atop the Pannacotta. It was altogether the perfect conclusion to a fantastic day!