The BC Wine Appreciation Society welcomed Chris Tolley to the new year’s first of many monthly tasting events last week. Fresh from a family vacation in warmer parts down south, Chris brought several wines from his southern Okanagan winery Moon Curser. Chris and his wife Beata will be celebrating the tenth anniversary of their adventurous winery this year, having acquired the Osoyoos East Bench property in May of 2004. Both Chris and Beata obtained professional winemaking training in New Zealand after switching gears from software engineering and accounting careers respectfully. They operate Moon Curser (formerly Twisted Tree) with the passion of two self-professed wine geeks, gleefully experimenting with what is possible in their vineyards, yielding many exciting Canadian firsts.

Using a combination of estate vineyards and long-term leased properties, the Tolleys are growing grapes previously absent from Canada. Their home vineyard includes Carménère, Tannat, and Tempranillo, and they recently acquired the vineyard responsible for their first varietal Touriga Nacional (named Best of Category at the 2013 All Canadian Wine Championships). While introducing himself and his winery to the assembled guests, Chris revealed plans to plant Nero d’Avola this year, and discussed earlier plantings of Dolcetto and Corvina (although that late-ripening variety ultimately wasn’t successful). The heartbreak over failed plantings like the Corvina is tempered by pleasant surprises like the Touriga, which Chris never expected to yield anything at all! 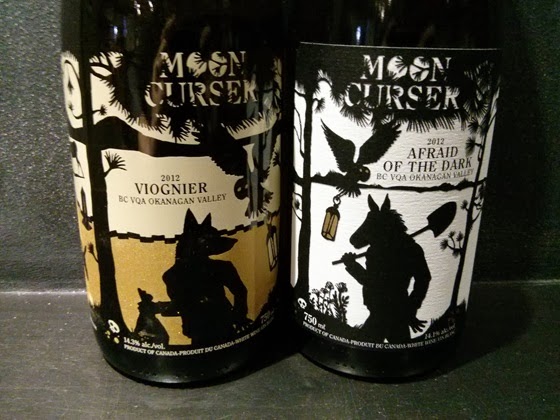 Soft-spoken Chris tempered his introductory discussion with the suggestion that perhaps we should actually drink some wine, particularly given the appropriately chilled whites on the tables. The “reception wine” of Blue Mountain Brut had whet our appetites for the aromatic Rhone grapes that comprise Moon Curser’s entire white portfolio at present. Although Chardonnay Musque has made an appearance in the past, right now Chris is focused on Viognier, Marsanne, and Roussanne. We had the chance to compare 2012 vintages of the varietal Viognier as well as the “Afraid of the Dark” blend of all three varieties. 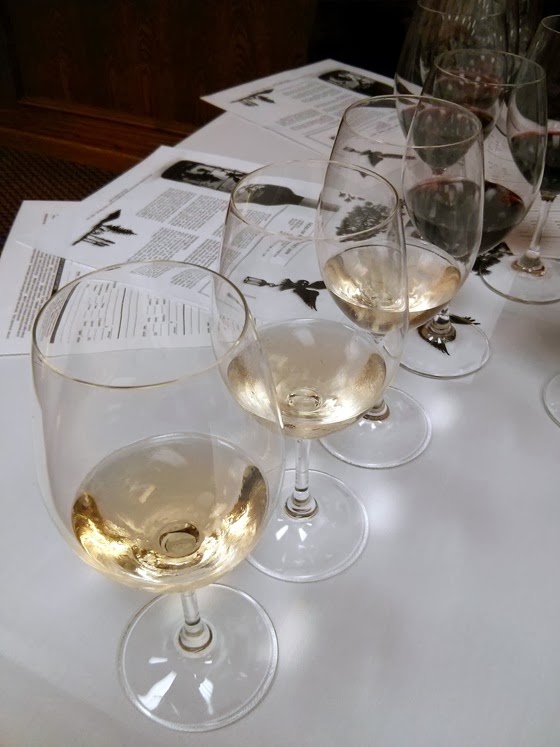 Starting with the Viognier we found a perfumed and serious wine, with an intensely flavoured palate of stone fruit and tropical pineapple notes, rather hot on the lemon finish. (Later, as it warmed an enjoyable creamy key lime pie character came out.) Chris pointed out that the Viognier costs more than other whites to produce, hence the $28 price tag, whereas the VRM blend is only $22. The Afraid of the Dark comes across as less aromatic than the varietal Viognier, with a rounder, smoother palate. This charming blend was a winner of a Gold Medal at the inaugural National Wine Awards last year. Flavours of white nectarines and orange blossom lead to an apple finish. The blend is nearly half Roussanne, with 31% Viognier and 22% Marsanne. On their own the Marsanne and Roussanne failed to impress Chris, but he feels the conglomerate of all three is much greater than the sum of its parts. 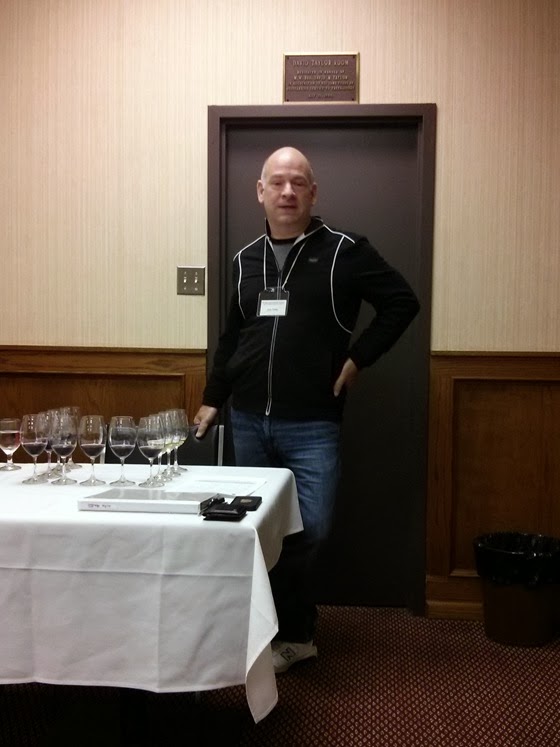 With so many red wines on offer from Moon Curser, the rest of the tasting was dedicated to darker juice. Although Chris’ varietal Cabernet Sauvignon, Malbec, Merlot, Petit Verdot, and Touriga Nacional weren’t available, there were plenty more to choose from! It seemed apt to begin with “Border Vines”, the Bordeaux-inspired blend that was originally born as “Six Vines”. Unlike the vast majority of red blends out there, Moon Curser has always included Carménère in additional to Cabernet Sauvignon, Cabernet Franc, Merlot, Malbec, and Petit Verdot. Chris even regaled the tale of being refused entry to a competition as a result of the blend components: by the time he’d convinced the gatekeepers that Carménère was in fact permitted in Bordeaux blends it was too late to compete! 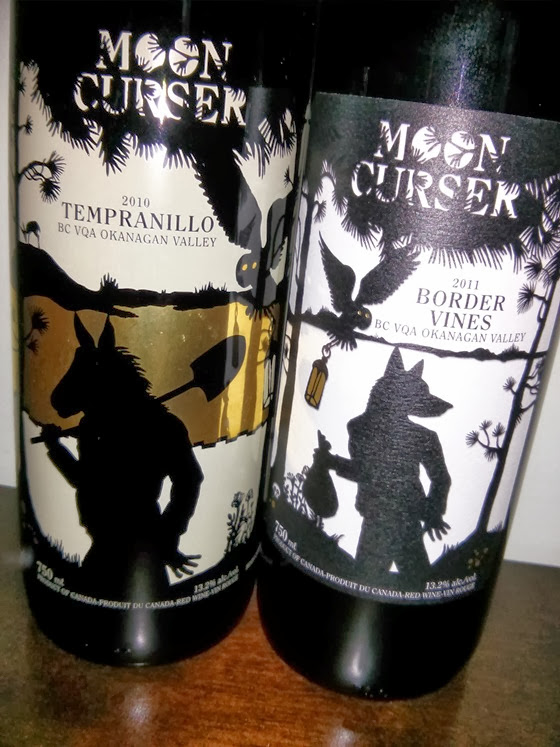 The current release 2011 Border Vines is doubly unique: in addition to including 1% Carménère, the blend is led by Malbec (38%). One quarter each of Cabernet Franc and Merlot are followed by 12% Petit Verdot and only 2% Cabernet Sauvignon to conclude matters. This creative blend provides a nose of field-fresh dark berries with hints of eucalyptus and leather. On the bright palate mild tannins facilitate enjoyment of the currants and blackberry flavours, with a touch of black licorice and an all-around grapey essence. At $25 it provides for a very quaffable, finely crafted wine at excellent value.

To show how he works with single varietals, Chris then moved us on to his long-since-sold-out 2010 Tempranillo. Leather immediately jumped forward on the nose, but the big juicy fruit leather palate provided a pleasant surprise. Despite an additional year of age, the Tempranillo displayed more prominent tannins than the (younger) Border Vines. 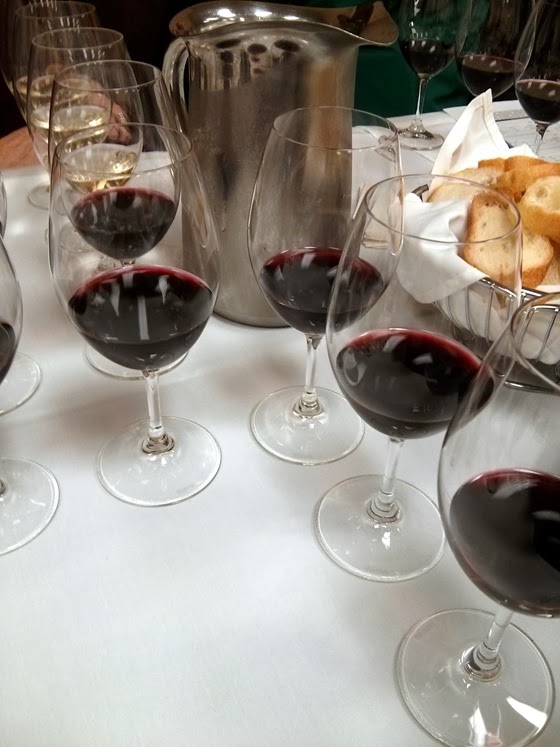 The “main event” was next, in the form of two three-year verticals, beginning with the varietal Syrah, from the 2009-2011 vintages. Syrah is typically Moon Curser’s largest production varietal red, with several hundred cases released each year (although that pales in comparison to the nearly 2,000 cases of Border Vines typically produced). Chris sources the fruit from up to three Osoyoos East Bench vineyards, and ages each block separately in oak (often including some Hungarian barrels) for about eighteen months before blending and bottling.

What was immediately apparent upon viewing the three Syrah was the difference in the 2009 vintage: this oldest of the three wines was noticeably rustier in colour than both following vintages. The maturity came out in the nose as well, with black pepper, leather, toast, and dark red berries. The juicy, rich palate made it an early favourite for many, providing memorable Port-like warmth and viscosity.

Both 2010 and 2011 Syrah saw changes via the inclusion of small percentages of other grape varieties. The 2010 vintage was amped up by 9% Tannat, and came across cooler on the nose, with prominent cocoa notes. The peppery, fruity palate was smooth and slippery, ultimately making it the crowd favourite of the three. For 2011 Chris co-fermented about 7% Viognier with the Syrah, leading to a slight floral perfume on the nose, and a youthful, fruit toast palate with a hint of white pepper and cocoa. Some bitter tannins on the finish suggest more time in bottle wouldn’t hurt for this young wine. 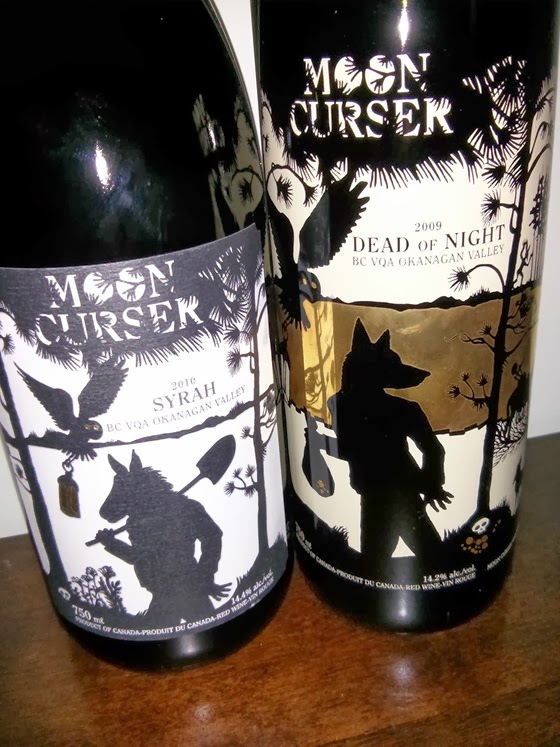 Our final three wines were Moon Curser’s “icon red” in the form of the “Dead of Night” Tannat-Syrah blend, which rings in at $38, a third more than any of the other wines in the portfolio. Acquiring Tannat for his vineyards was no easy feat, and Chris shared the humorous tale of his efforts to call around California providers for budwood. As it turned out only one source was available, who was subsequently barraged by requests from every other provider Chris called upon being turned down. Eventually the sufficiently harassed vineyard owner relented – with Chris having no idea he’d been waging an inadvertent campaign of intimidation!

Up until 2008, during the Twisted Tree era, the winery produced a straight varietal Tannat, but for 2009 Chris experimented with some blending trials with Cabernets, Malbec, and other reds. It was only after an offhand suggestion by Beata did he include Syrah, which they both unequivocally selected as their favourite choice (and since then it comprises nearly exactly half the blend). With that first version of the new Dead of Night in front of us it was obviously dominated by dark fruit, with additional austere elements of leather, earth, and charcoal. A very smooth palate was awash in rich, bright fruit such as cherries and plums. After nearly three years in bottle the wine is aging quite well, with years ahead as well.

Dead of Night 2010 is the current release, still available at the winery and stores – about 400 cases were produced. The 2010 is not quite as expressive on the nose as the earlier 2009, yet with noticeable raisiny hints. More savoury elements come forth on the palate, which is dominated by red fruit over black fruit, with berries and leather most apparent. Once the 2010 is sold out the 2011 vintage will become available for purchase, and we lucked out in obtaining a preview taste. The young 2011 showed off an elegant nose, almost lightly perfumed, with leathery, green hints. The prominent tannins on the palate suggest additional years in bottle would be wise however, so there is no rush to push it out the door just yet. To conclude the tasting Chris revealed plans for varietal Tannat in addition to the Dead of Night for the recent 2012 and 2013 vintages, due to warm, ripe conditions both years.

The evening was altogether a great introduction to Moon Curser for those without much experience, and a chance for long-time fans to compare and contrast varietals and vintages they may have in their cellars. I myself was pleased to sample wines I’ve already enjoyed (such as the 2009 Syrah), and those aging at home (including the Dead of Night). I especially look forward to my next visit in person to Moon Curser for more unique wines and news of the Tolleys’ newest vineyard adventures!