Black Hills Gets the Riedel Treatment

The BC Wine Appreciation Society welcomed a couple of special guests recently, as a sold out crowd was present to experience the wines of Black Hills presented in exclusive varietal-specific Riedel glasses. Riedel Canada Regional President Stewart Risto had flown out from Toronto to lead the tasting, with Black Hills President Glenn Fawcett present as well, in large part just to enjoy the experience! The BCWAS Executive had arranged with Riedel for a special deal on the high-end Vinum XL stemware, so that each attendee got to take home the Red Wine Tasting Set they were using, for a substantial discount off of normal retail prices. 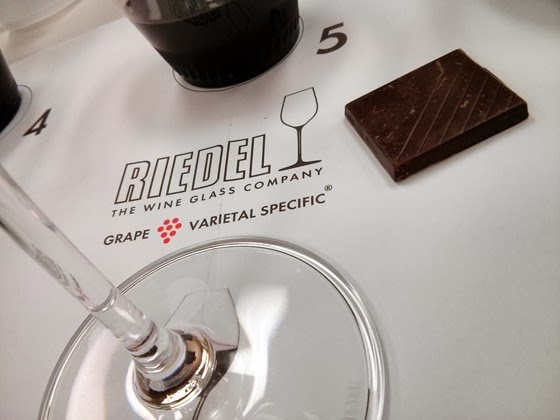 As Glenn and Stewart introduced themselves we sipped on Black Hills Alibi 2012, their Sauvignon Blanc-Semillon blend, and gained some interesting perspective on the wine’s history. Glenn explained that the Alibi’s playful, stylistic label is a form of tribute to French winemaker Didier Dagueneau, whom Black Hills founder Senka Tennant met and worked with for one harvest in France. Dagueneau was an outsider when he started his Loire Valley winery, but he went on to produce some of the world’s most celebrated Sauvignon Blanc before his untimely accidental death in 2008. The Alibi label (and the ripe, creamy wine inside) is an homage to his eccentric manner, and his well-deserved success.

While the Alibi went down easy, Glenn shared some of the history of Black Hills, and their Black Sage Bench vineyard. I was amused to hear of the early nickname for the region, “Black Sage Beach", which came about when the land was cleared for vines and revealed to be almost pure sand. As pointed out by Tinhorn Creek, when discussing their Black Sage Bench Diamondback Vineyard, challenges abound in such terrain, including holes that fill with sand immediately upon being dug, plus low nutrients and very high drainage – requiring more intensive irrigation. 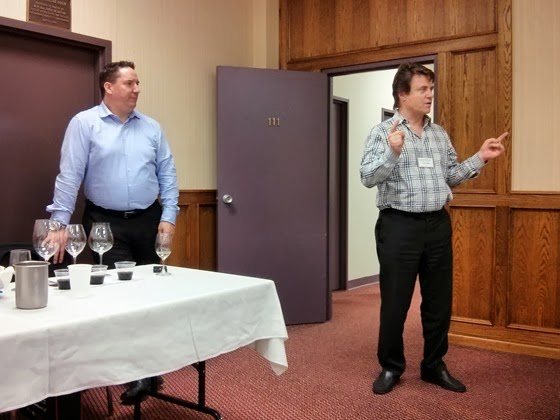 Soon Glenn sat back to witness Stewart work the room, in a confident and very experienced manner to say the least. As Stewart was happy to point out, he has travelled the world extensively on behalf of Riedel, and has no doubt spoken to hundreds of enthusiastic audiences just like those gathered before him. Those travels – and the food and wine involved – have led him to pack on a few pounds, which he proudly declared to be “Michelin fat”, having come from many of the world’s finest Michelin-starred restaurants.

While Stewart seemed to have a bevy of fascinating stories about his work – and the eccentric Riedel family – he himself recognized it was time to start focusing on the glasses and wines in front of us. We were to taste the new 2011 vintages of Black Hills’ Carménère, Syrah, and Nota Bene out of three unique Riedel Vinum XL glasses. Having been first released for sale only four short years ago, the XL series are much larger than Riedel’s other stemware (the Cabernet glass can easily hold any entire bottle of wine). Stewart explained that wines have changed over the years since the Vinum line was introduced (1986), with higher alcohol content demanding a larger bowl to better introduce the aromas of “big, bold, concentrated wines.” The seemingly enormous glasses are machine-blown in Germany, from lead crystal, and cooled slowly to line up the molecules and ensure strength. Stewart demonstrated the advantages of the Riedel manufacturing technique by literally flexing the stem and compressing the bowl, to anxious gasps from the audience! 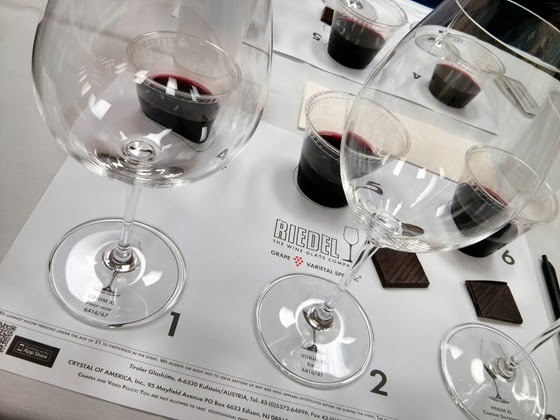 The tasting process for the evening was set up to show each wine at its best, in the most appropriate glass, and to clearly illustrate the differences between the three different glasses. As a result we were asked to sample each wine from all three glasses, paying close attention to how the nose and palate were altered as a result, beginning with the rare Carménère. Only about 165 cases of Carménère are produced each year at Black Hills, and the wine isn’t even sold to the public at the winery’s own tasting room, so we were very lucky to enjoy it as part of our tasting! What became immediately apparent was that the huge Cabernet Sauvignon glass did little to maximize the Carménère, it being simply too large to hold the delicate aromas, and in fact served only to emphasize the acid and tannin on the palate. The Pinot Noir glass was by far the most appropriate for the task, carefully shepherding the aromas, and ensuring the wine landed on the tip of the tongue, keeping it in balance.

The 2011 Syrah represents only the third vintage of this varietal from Black Hills, but it is an ideal wine for the terroir. Glenn was quick to point out that eight of the eleven wines named “Red Wine of the Year” in the annual Canadian Wine Awards (2002-2012) comprised Syrah from the Black Sage Bench. Black Hills’ success with Syrah became evident as we enjoyed rich aromas of leather and spice, and an intensely fruit-forward palate from the appropriate glass. In the Pinot Noir glass the Syrah was overcome by toast and a somewhat bitter palate, while from the larger Cabernet glass the tannins dominated the palate. Back in the Syrah glass, a few bites of chocolate ensured the pepper notes in the wine really shone through as well, gaining additional compliments, and fans!

The young 2011 Nota Bene was our final wine, destined for the cavernous Cabernet glass – ideal considering Black Hills’ icon red is typically about one half Cabernet Sauvignon. Before tasting the wine, we heard the exciting origin story that started it all: shockingly the winery’s original owners had little aspiration to make wine, but were instead seeking to sell their grapes to others! The McCarrell and Tennant families who planted the vineyard in 1996 eventually decided to produce a small amount of wine themselves, and the first vintage of Nota Bene came from the 1999 harvest. Shortly after the doors to their small Quonset hut tasting room opened in June of 2001, the wine received accolades in Vancouver media from Jurgen Gothe, and visitors began knocking on the door in droves. The winery has had little trouble selling their wine since then, and they certainly use all their grapes now!

In the Pinot Noir glass, the Nota Bene was restrained on the nose, with only notes of toasted oak showing through, and little in the way of finish on the red fruit palate. From the Syrah glass, cherry fruit emerged, along with a hit of alcohol, but significant tannins overwhelmed the palate. In the Cabernet glass, the wine showed ripe, sweet fruit on the nose, and additional spicy dark fruit on the palate, which paired perfectly with the dark chocolate squares from which we all nibbled. Once again, dramatic differences in aroma, flavour, and body were evident amongst the three glasses – even Glenn was amazed at the differences! With the tasting complete it didn’t take much time for the few additional sets of glasses to be snapped up by eager attendees, who all seemed ecstatic to be taking home such transformational stemware. Many thanks to Riedel Canada and Stewart Risto, and to Glenn Fawcett and Black Hills Winery for providing for such an informative, entertaining, and delicious evening!