After another wildly successful and entertaining Bus Tour in September, the BC Wine Appreciation Society restarted the regular series of winery tastings this month, with a visit from Penticton winery Perseus. This young winery has experienced quite a tumultuous few years, having been founded in 2009, sold in 2011, and expanded in 2013. At the same time, three talented winemakers have had their hands involved in creating a broad portfolio of whites and reds, with the reins having recently transferred to Okanagan Crush Pad’s Matt Dumayne. In addition to setting his own style for the 2013 vintage, Matt is also tasked with finishing the work of consulting winemaker Tom Di Bello, who left earlier this year (and can now be found at Burrowing Owl). Tom originally took over from consultant Lawrence Herder, who produced the 2009 wines and much of the 2010 vintage. 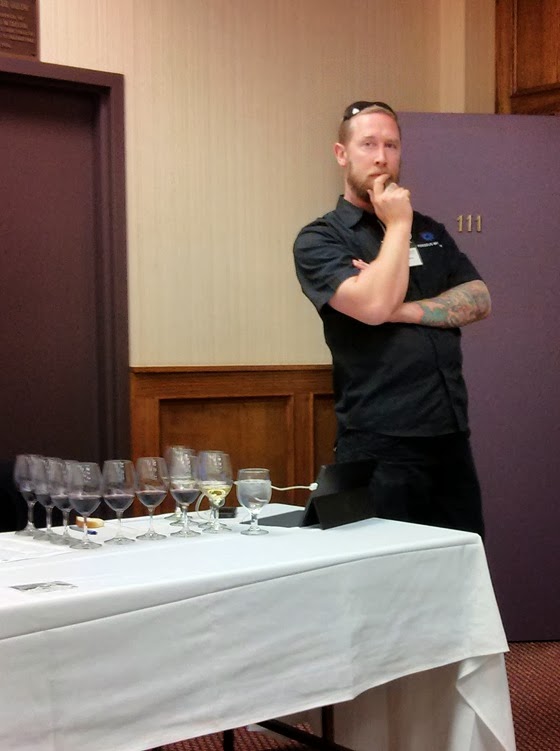 For the tasting we were joined by both Matt Dumayne and Perseus’ President and CEO Rob Ingram. Although Matt has had little to no influence on the wines we tasted (having only recently joined the team from his home base at OCP – Perseus’ production facility), he generously provided commentary and thoughts on future directions. We had available to taste four whites from the 2011 and 2012 vintages, as well as a range of reds going back to the first wines from 2009.

The 2011 Sauvignon Blanc prompted some enthusiastic comments from New Zealander Matt, who mentioned that he dislikes the style of Sauvignon produced in his home country. In his words, Perseus’ rich, tropical version is “everything Marlborough wants to be but can’t get there.” The wine was showing very enjoyable freshness, particularly for a nearly two-year-old bottle. As Perseus purchases most of their grapes from selected premium vineyards, Rob was able to share the sources for many of the wines: the Sauvignon Blanc was obtained from a Skaha Lake vineyard beside Blasted Church. Ironically, despite its popularity during our tasting, there will be no more Sauvignon Blanc from Perseus, as the winery has shifted their focus to other varietals.

Future efforts at the winery will continue to include Pinot Gris however, and we got to sample the luscious, Alsatian-styled 2011 vintage. Matt was impressed that this wine isn’t “thin, like many Okanagan Pinot Gris,” and revealed his plans underway to produce a Reserve bottling in 2013, given the exceptional quality of grapes from certain vineyard rows. This degree of production control can be obtained due to Perseus’ full ownership of their estate vineyard on Lower Bench Road in Penticton – planted exclusively to Pinot Gris.

Additional whites included a 2011 Chardonnay, from Naramata and Osoyoos vineyards: fermented and then aged 11 months in barrel, the creamy texture and mango and apple flavours yielded a long finish. The single 2012 wine came in the form of a Similkameen valley Viognier, bottled just four months ago. Aromas of vanilla and pineapple, with creamy orange flavours benefitted from leaving the wine on its lees until a month before bottling. 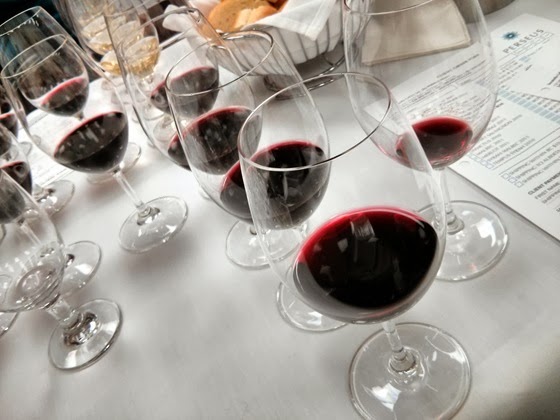 Several varied red wines awaited us as the whites were finished up, beginning with a very rare small lot 2011 Malbec. Only 50 cases of this youthful and rich wine were produced, and the vibrant purple colour, violet aromas, and mint chocolate flavours kept me coming back for more! The similarly small production of 2011 Cabernet Franc was next up, with firm tannins but soft acidity. Coming primarily from the Similkameen’s renowned Blind Creek vineyard, it showed hints of developing dark fruit and candidacy for further aging.

Two mini-verticals of reds to conclude the tasting began with the 2010 and 2011 Cabernet Sauvignon, Perseus’ most expensive wines at $50 a bottle. Like the Malbec and Cabernet Franc, the Cabernet Sauvignon is part of Perseus’ “Select Lots” series of wines, with only a handful of barrels produced each year. The grapes are sourced from the Osoyoos Indian Band’s Inkameep Vineyard in the southern Okanagan, home of much legendary Cabernet Sauvignon. The huge “legs” (thanks to more than 15% alcohol) in the 2010 led up to a long finish featuring dark fruit and noticeable licorice flavour. The newer 2011 vintage was only bottled four months ago, and showed a fresher, fruitier profile, with slightly softer acids, plus some entertaining hints of leather and even manure on the nose. Only 88 cases of the 2010 Cabernet were produced, and 111 cases of the 2011, so the winery barely even advertises these wines (nor their other Select Lot brethren), as they quickly sell out via the tasting room.

Finally it came time for the three year vertical of every available vintage of Perseus’ “Invictus” red blend, from 2009 to 2011. The 2009 and 2010 bottles were primarily the work of Lawrence Herder, while the as-yet-unreleased 2011 came from Tom Di Bello’s consultancy. Having done his homework, and with sufficient reference material available to him, Matt was able to expand upon the contents of each bottle and provide informative observations. The very ripe, 15.5% alcohol 2009 was comprised of 44% Cabernet Sauvignon, 34% Merlot, 10% Petit Verdot, 9% Cabernet Franc, and 3% Malbec. Having started to get a little rusty in colour, the 2009 is clearly maturing briskly, showing generous stewed fruit aromas and flavours with a smooth, easy-drinking texture.

Very little of the 2009 Invictus remains on store shelves, as the current release 2010 has taken over at the winery. The 2010 was the most savoury of the three wines, showing more tannin than its predecessor, plus a nose stepped in leather. Winemaker Lawrence Herder saw fit to substantially change up the blend in the second year, favouring a majority of 56% Merlot, followed by 29% Cabernet Sauvignon, 9% Petit Verdot, 4% Cabernet Franc, and 2% Malbec. The 2010 will take longer to mature than the 2009, so depending on sales figures there is no hurry on the part of the winery to push out the 2011 too early.

Our preview tasting of the third vintage of Invictus was very revealing, illustrating the continued change in the wine as Tom Di Bello took over winemaking duties. While Merlot remains a favoured component of the blend, at 40%, Malbec has jumped to 21%, followed by 18% Petit Verdot, and only then do Cabernet Sauvignon (11%) and Cabernet Franc (10%) come into play. The 2011 Invictus was my personal favourite, given the strong Malbec influence and accompanying milk chocolate aromas, plus additional black fruit flavours. 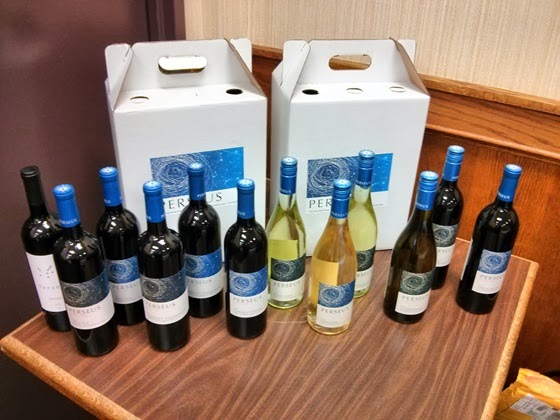 The evening concluded with an exciting wine raffle, thanks to CEO Rob Ingram having brought along a full case of wine, representing nearly every varietal and blend produced by Perseus. Rob’s generosity in donating twelve bottles ensured that a great many guests went home even happier! As winners were drawn, and selected their preferred bottle, each was invited to draw the next lucky recipient. I felt particularly fortunate to win the 2011 Cabernet Sauvignon, having only recently picked up the 2010 at the winery on the way to the September BCWAS bus tour; neither bottle will go lonely in my cellar now.