The annual BC Wine Appreciation Society Bus Tour has become one of my top wine country shopping opportunities. Not only does the tour itself visit numerous top-tier and up-and-coming wineries, but the trip out to the Okanagan can provide for plenty of detours to obtain winery exclusive bottles. With this year’s tour operating out of Summerland Waterfront Resort I elected on a route that took me there via the Coquihalla, and home via Osoyoos and the Similkameen Valley – to cover as much territory as possible. 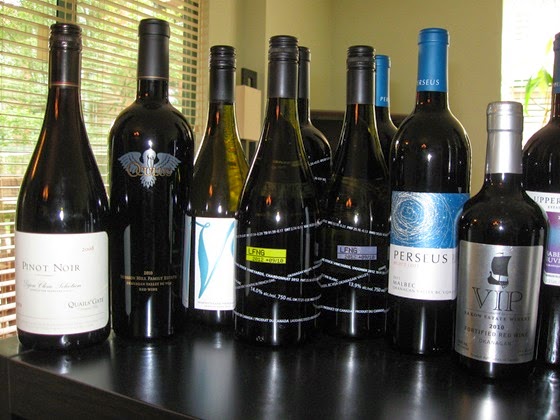 My Friday began with an early morning departure and an uneventful, easy drive to West Kelowna, where I looked forward to lunch at Quails’ Gate’s Old Vines Restaurant, my first time dining at this well-regarded venue. Beforehand I popped into the Wine Shop seeking a bottle of the winery’s elusive “Dijon Clone Selection” Pinot Noir. Although the wine was originally released two years ago (to glowing reviews), I had recently read that a few remaining bottles were newly available at the winery. Considering I had missed out during the initial release my fingers were crossed for this last chance opportunity. My persistence was rewarded with one of the last bottles from below the counter, #1873 – each bottle (of 2640) is individually numbered!

Full of delicious food and relaxed from the gorgeous garden and vineyard views at Quails’ Gate I next stopped by Mission Hill for a bottle of newly released 2010 Oculus to maintain my vertical of this iconic wine, plus the first release of (2012) Viognier from the winery’s Martin’s Lane collection (joining Riesling and Pinot Noir). Quickly zipping south – ironically past the resort – I made it through Penticton and up to Laughing Stock before closing. There I was able to collect my fall allotment from the Preferred Share Wine Club – and even taste the three wines in my six-bottle box: the 2012 Chardonnay and Viognier are both delightfully fresh and fruity, from a near-perfect vintage. The delayed fall release of these whites has given them ample time to overcome bottle-shock and knit together extremely well. I was even impressed by the sample of very young 2011 Portfolio: despite near-mandatory cellar time and a cool, disappointing vintage David Enns has put together another superb wine I’m quite pleased to have brought home with me.

My final visit of the day before travelling back through Penticton and north to Summerland was a stop at Perseus, open late and within the city limits. I was finally able to acquire a bottle of the winery’s well-regarded 2010 Cabernet Sauvignon, from a miniscule lot of only 89 cases. I tacked on a bottle of 2011 Malbec (from only two barrels) given how rarely it appears as a single-varietal in the Okanagan, and another of a surprisingly peppery 2011 Syrah Malbec that was open for tasting. With a full case in the trunk already I was feeling quite optimistic about the upcoming weekend of touring, and made it back to Summerland just in time for the opening dinner and Bottleneck Drive tasting at Local Lounge. My day ended with one last purchase of VIP Fortified Pinot Noir from Saxon Winery – I was quite happy to order a couple bottles (gracefully delivered to the hotel the next day) after tasting it during the evening’s events. 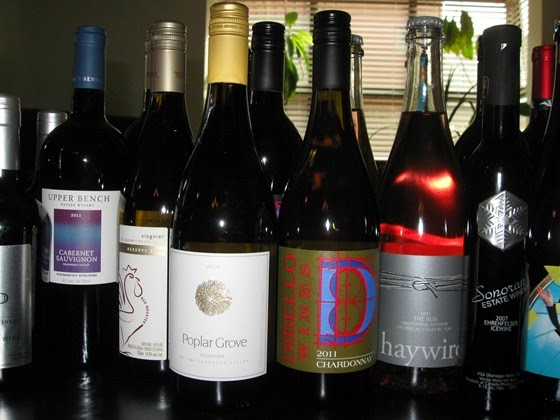 With my own driving duties for the weekend put aside, I was free to relax and taste plenty of fine wines over the next two days as our bus weaved through the wineries of the Naramata Bench and Summerland. On Saturday we enjoyed the morning hospitality of Upper Bench Winery & Creamery, where I gladly purchased structured 2011 Cabernet Sauvignon from Gavin Miller – who helped launch the lauded reds of Painted Rock. Lunch at Poplar Grove saw me add a bottle of extremely delicious 2012 Viognier to my stash, and then another one of the same from Red Rooster later in the afternoon, along with a 2011 Malbec as well. That night’s Winemaker Dinner at Local Lounge featured Tom Di Bello, which made for the perfect opportunity to obtain some Di Bello Wines 2010 Syrah, 2011 Chardonnay, and 2011 Merlot straight from the source. Spending the meal talking with Tom and Tari Di Bello (and Robert Van Westen) was easily the icing on the cake!

On Sunday, as we toured Summerland wineries my purchasing habits were slightly more tempered – knowing the virtual smorgasbord of southern Okanagan wineries awaiting me on the way home the next day. Ironically the wide availability of Sumac Ridge’s wines – in particular the reliable sparkling Steller’s Jay – negated any need to purchase during our morning visit. However, our lunch at Okanagan Crush Pad provided an invaluable opportunity to pick up a couple bottles of sparkling “Bub” Rosé from house brand Haywire. Later in the afternoon as we wound things down at Sonoran Winery I picked up my final Bus Tour wine in the form of a delicious tropical caramel 2007 Ehrenfelser Icewine. Ehrenfelser as icewine is rare enough, and finding a bottle that’s already been aged into something particularly interesting is rarer still. 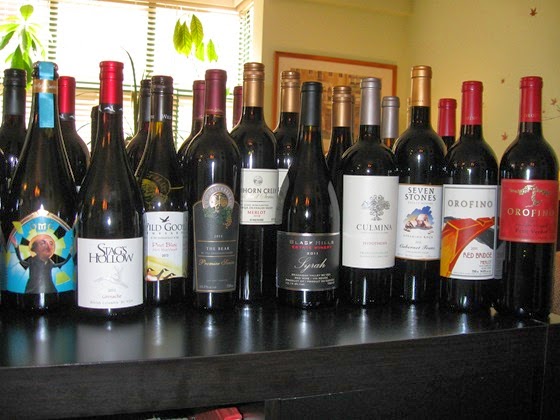 Although I gleefully picked up some exciting rarities and surprise treats during the Bus Tour, it was on the way home the next day that I really got going: many of my favourite wineries lie south of McIntyre Bluff, where heat-loving red grapes thrive. I got an early start, in the hopes of making it home to Vancouver before dark, with my first visit to the BC Wine Information Centre in Penticton. I made sure to take home the Lt. Governor’s Award-winning Wild Goose 2012 Mystic River Pinot Blanc I found on the shelf at the Centre’s VQA Store – not knowing what might be available at the winery in Okanagan Falls, or whether I’d have time to stop there. Along Skaha Lake south of Penticton I swung up to Blasted Church after taking in the sights at Painted Rock, and added a couple bottles of the brand new OMG Sparkling, plus an advance release of 2011 “Holy Moly” Petit Verdot. Admittedly 2011 wasn’t the ideal vintage for varietal Petit Verdot, but at the very least it should be interesting to taste a grape that is nearly always blended into other wines in miniscule proportions.

With the clock already ticking I had to burn through Okanagan Falls, stopping only at Stag’s Hollow, where I was very lucky to get some of the winery’s brand new 2012 Grenache, a very exciting Canadian first for this varietal. Winemaker Dwight Sick planted the vines back in 2006 and has been patiently waiting several years to see this wine come to fruition. Only 170 cases were produced, and it likely won’t make it into stores, hence my personal visit. Of course, adding the newly-released 2011 Tempranillo and a bottle of the winery’s 2011 “Hart” Port-style fortified Merlot were additional excellent reasons to wind my way off the highway.

I spent the next couple of hours working my way south, adding to my growing bounty, and picking up some pre-orders to avoid dreaded shipping costs. From Fairview Cellars in Oliver I picked up Bill Eggert’s Fall releases without question: 2011 Cabernet Sauvignon, Merlot, “Bucket O’ Blood” Syrah/Cabernet, “Two Hoots” Cabernet/Merlot, and a couple bottles of “The Bear” Meritage. At Tinhorn Creek a few minutes away I made sure to collect my Fall “Crush Club” half-case of reds, as well as add a winery-exclusive bottle of 2010 Oldfield Series Syrah, which was produced in quantities too small to include in the Club orders this year (only 210 cases). Then I made my first visit to the Triggs family’s new winery Culmina, where I was excited to collect my pre-ordered bottles of 2011 Dilemma Chardonnay and Hypothesis red blend. I bumped into some fellow BCWAS members getting a personal tour from Don Triggs, and begrudgingly had to leave with only some photos and plenty of jealousy! Finally, across the valley I stopped at Black Hills for the 2011 Syrah, the veteran winery’s third vintage with this varietal, which I’ve been collecting since first release.

I finally made it to Osoyoos for a quick lunch before heading home via Highway 3 and the Similkameen Valley. Still eager to arrive in Vancouver during daylight hours I only had time for two quick but vital winery visits. At Seven Stones I was eager for a bottle of the newly released 2011 Cabernet Franc, continuing my efforts to collect all of George Hanson’s excellent red wines given the opportunity (not that his Chardonnay and Rosé don’t also deserve plenty of compliment). Finally, in Cawston I pulled up to Orofino with a reserved spot in the trunk for my second case from the winery’s “Collector’s Club”. Upon receipt I was very pleased to see multiples of 2012 Pinot Gris and Sauvignon Blanc, as well as 2011 Syrah and Merlot, and even two bottles of the 2010 Hendsbee Vineyard Petit Verdot, of which only 75 cases were produced. Proprietors John and Virginia Weber had even included a special bottle of 2007 Canadian Oak Chardonnay for wine geeks to fawn over. To cap off the trip I bumped into the same group of BCWAS friends I’d earlier seen at Culmina as I was leaving – it’s nice to have friends with such excellent taste in BC wine!