A recent tasting with the BC Wine Appreciation Society provided fascinating insight into the expansion of the local wine industry. Heleen Pannekoek and her husband Rolf de Bruin founded Fort Berens Estate Winery in 2005, in the small Fraser Canyon town of Lillooet, between Whistler and Kamloops. The winery has been producing a robust portfolio of wines from purchased Okanagan grapes and from their own growing estate vineyards, planted in 2009. Heleen, alongside Agent Monica Pereira from Vino Allegro, was more than happy to share her wines with the Society during a mid-month visit to Vancouver. 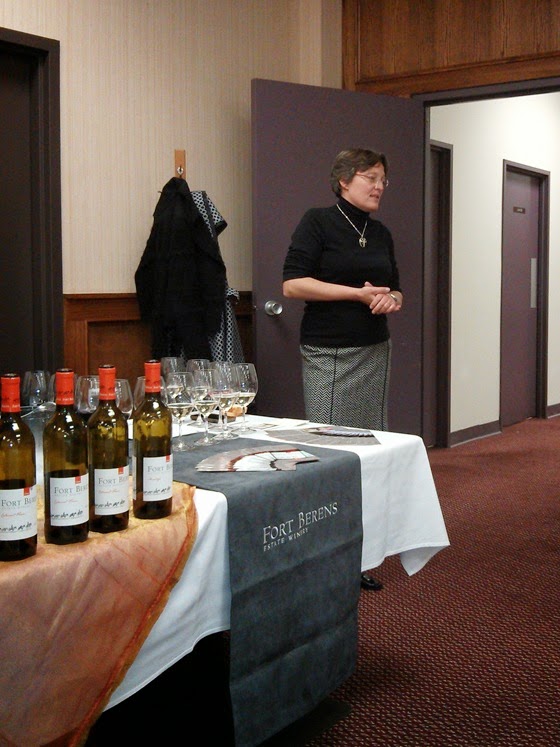 As Heleen introduced herself we learned about her family’s move from the Netherlands, when she and Rolf traded busy European business careers for dramatically different lives as Canadian farmers. They benefited from consultation with some of BC’s top viticultural talent, including Dick Cleave, Harry McWatters, and Tom DiBello, leading to their decision to settle in Lillooet instead of the Okanagan, where land prices can be ten times higher. One of the benefits of opening the first winery in Lillooet has been the willingness of restaurants to try their wines out of curiosity – often leading to great satisfaction and acquisition. The obvious potential of the region, awash in high and low temperatures exceeding the Okanagan, has led Rolf and Heleen to encourage neighbouring alfalfa growers to switch production to grapes. As Heleen put it, Europeans took a thousand years to develop their wine culture, so there is plenty of time to grow an industry in Lillooet.

The first flight of wines we sampled featured the new 2013 whites, bottled just last month, and produced exclusively from estate-grown fruit as the Fort Berens vineyards mature and expand. Pinot Gris impressed immediately with melon and floral aromas reminiscent of Elderflower syrup. The bright, tree fruit palate showed off lemon drop flavours and a rich, creamy mouthfeel with a lip-smacking dry finish. I couldn’t help but be reminded of the extremely successful Pinot Gris from Poplar Grove – particularly great this year – putting Fort Berens in very good company. The 2013 Riesling tasted next was off-dry, but with higher acidity than the Pinot Gris it retains impeccable balance. Heleen informed us the fermentation stopped naturally at 13 g/L of residual sugar, helping along the delicious honeyed lime palate and soft fruit flavours of peach and sweet apple. 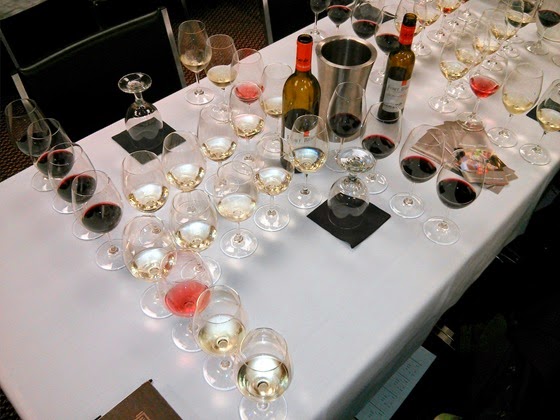 A saignée-style Pinot Noir Rosé next caught our eyes with a vibrant, seemingly glowing colour palate. The 200 cases of Rosé were bled off estate Pinot Noir, of which 700 cases will be forthcoming in the future. A fresh, candied berry nose led into a palate that reminded me of caramel apples, despite the wine being fermented to dryness. Crisp acidity and low sugar will provide for many superb food pairing opportunities this summer. Finally, the 2013 Late Harvest Riesling delivered a sweet treat thanks to grapes matured on the vines until late November: earthy aromas, guava, and honey yielded to tropical lychee, mango, and pineapple flavours on a silky palate.

Fort Berens’ wines have been produced thus far by the talented multi-disciplinary team at Okanagan Crush Pad in Summerland, but a full-featured winery is currently under construction in Lillooet, to welcome the 2014 vintage. Heleen remarked that although the help of OCP has been invaluable, travel between Summerland and Lillooet limits the points in time during which she and Rolf get to sample the wines and make important decisions. The new winery and tasting room construction in Lillooet is occurring in concert with the recent hiring of Vineyard Manager Megan de Villiers and Winemaker Danny Hattingh, a dynamic South African couple with international experience. Megan and Danny will help lead the next stage in Fort Berens’ evolution, as the winery plants additional acreage while aiming for 12,000 cases in annual production within a few years.

Up next was a flight offering a truly unique offering, something I don’t imagine BCWAS has ever experienced before: four glasses of the same Chardonnay from differently-sealed bottles. In this case, the difference wasn’t between types of cork, or even cork versus screwcap, but four alternate Stelvin caps, each with different oxygen permeability! The manufacturer of Stelvin screwcaps recently developed several new liners that allow for slow oxygen exchange, similar to that experienced in bottles sealed by natural cork. Fort Berens bottled a mere case each of their 2012 Chardonnay using three experimental caps, in addition to the traditional Stelvin (SaranTM Tin) closure, and we had the chance to examine and differentiate the samples. 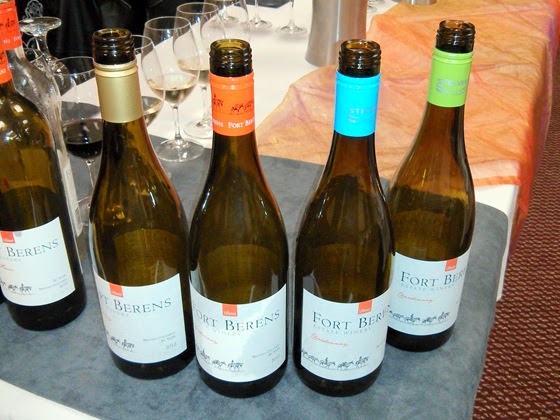 As with the earlier 2013 wines, the 2012 Chardonnay was produced exclusively from Lillooet estate fruit – the winery’s first estate Chardonnay. Approximately one third of the grapes were fermented in new and used French oak, and then aged for 9 months, while the remainder were fermented cool in stainless steel. Two-hundred and seventy-five cases were bottled last June and it is sold out at the winery, so we were even luckier to sample it, let alone the precious experimental library bottles. While the regular bottling involved the cap with lowest – virtually no – permeability, the “Oxygen Transmission Rate” of the others ranged from low multiples to many orders of magnitude greater. At first it was challenging to differentiate between the four Chardonnay samples, but with much back and forth some unique characteristics began to emerge. Citrus, buttered popcorn, and toast aromas were generally present to different extents, and flavours of green apple, lemon, and creamy caramel emerged on the palate. However, the crowd showed no strong consensus when it came to choosing a favourite in the end, illustrating the many individual differences that exist even in experienced consumers!

With our palates sufficiently warmed up and strenuously exercised already, the final flight of four wines delved into the charming reds Fort Berens has developed by blending Lillooet and South Okanagan Black Sage Bench fruit. We began with a three vintage vertical of Cabernet Franc, from the sold out 2010 to the upcoming 2012, with increasing proportions of estate fruit over time. The all-Okanagan 2010 wine was noticeably different in colour, with rusty tones readily apparent. Dusty tannins and aromas of smoke, dark berries, and hints of leather led to an almost bloody palate with cherries and additional toasty notes. The dramatically different 2011 and 2012 wines include 70% Lillooet estate fruit, both showing brighter purple colouring, and similar profiles favouring juicy black cherries and chocolate – think Black Forest Cake! I particularly enjoyed the 2011, but fear it has been cleared off store shelves; fortunately the upcoming 2012 (with bright acidity, a mocha focus, and smooth, ripe tannins) saw increased production, and has a great deal of future potential. 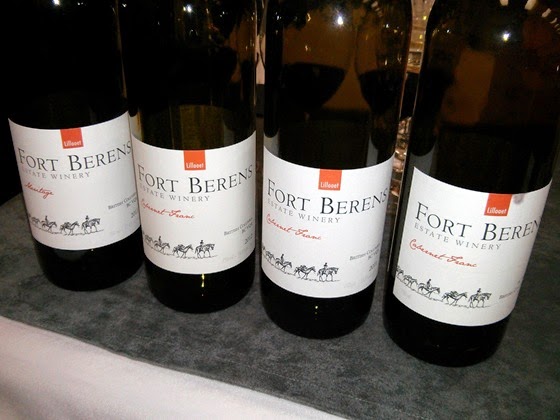 As Heleen shared some details of the winery’s successful “Discovery Club” we sipped the final wine, a 2011 Meritage blending Okanagan and Lillooet Merlot, Cabernet Sauvignon, and Cabernet Franc. The Meritage – currently available – exhibits redder colouring than the varietal Cabernet Franc, and a dry, more savoury flavour profile, with underlying blueberry hints from the Merlot and a long, enjoyable finish. Because Club memberships and sales are growing, a second vineyard field will be planted soon – including more Merlot – presumably further boosting the estate contribution to the Meritage. Heleen was particularly proud and honoured to report that over 150 Club members hail from Lillooet alone, quite a feat and a heart-warming show of support from a town of only 2,500 people! Heleen & Rolf’s enthusiasm and support for the Fraser Canyon appellation is strong: they don’t want to be the only winery in Lillooet, and are looking forward to heading up a rising new wine region. Based on the quality wines we enjoyed it certainly seems likely it won’t be long until some friendly competition and company joins them.