The new year brings ever more new wine, with increasing release of the 2012 vintage, now more than two years in the past. Even 2013 reds are starting to appear, having enjoyed a solid twelve months in their respective tanks and barrels. Some brand new Pinot Noirs came home with me alongside a few new vintages for cherished verticals, both young and old. 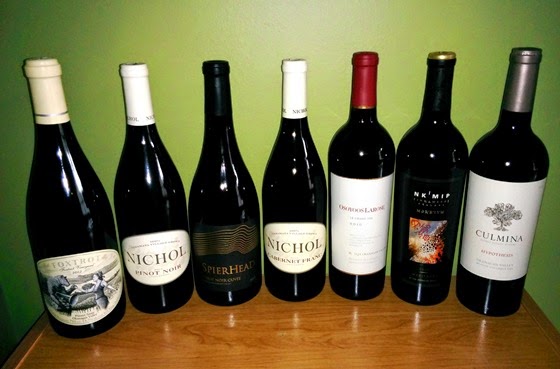 Foxtrot 2012 Pinot Noir: This wine obviously sees a more complex barrel program than most – it was only just bottled in September, two years after harvest. Widely acknowledged as one of BC’s superlative Pinot Noirs, the wine is produced in small proportions (500 cases) from a 3.5 acre Naramata Bench vineyard. Fortunately John Schreiner shared the good news last year of an expansion to the self-rooted vineyard. The wine is being released at the winery in February, and seems to have shown up in selected stores in advance. Firefly Fine Wines & Ales $69

Nichol 2012 Pinot Noir: More Naramata Pinot, this time from one of the original wineries on the Bench. Nichol reports their vineyard (also own-rooted) was planted between 1989-1991, bringing at least some of the vines up past 25-years-old by now. The Pinot Noir comes from a mere six rows of vines, yielding about 400 cases that spent 13 months in neutral French oak. The winery describes it as the “fleshiest” Pinot they have released in some time, providing “more immediate pleasure than previous vintages,” but still good until 2020. Firefly Fine Wines & Ales $34

SpierHead 2013 Pinot Noir Cuvée: I don’t often get to know a wine even before bottling, but this one crossed my lips in September during a winery visit as part of the BCWAS Bus Tour. Proprietor Bill Knutson generously offered our group tank samples the day before bottling, to great satisfaction. Originally imagined as a producer of Bordeaux varieties, the five-year-old winery has rapidly become known for finely crafted Pinot Noir. I was quite excited to learn of this flagship wine’s public release, but the miniscule 100 cases produced are few and far between – get it now! Sutton Place Wine Merchant $41

Nichol 2012 Cabernet Franc: All the Nichol reds are typically released together, from the same vintage, at the same time, and retail distribution is fairly well established. (That being said I haven’t spotted the Syrah just yet, as most stores are still selling the 2011.) The Cabernet Franc is a 414 case lot, having spent 12 months in neutral French oak before bottling last March. The excellent 2012 vintage has produced a particularly ripe wine in the eyes of the winery, with great aging potential until 2022. Firefly Fine Wines & Ales $34

Osoyoos Larose 2010 Le Grand Vin: Everyone knows one of the original “icon reds” from BC, produced in a relatively consistent age-worthy style since 2001. The 2010 is the last vintage fully under the supervision of long-serving winemaker Pascal Madevon. Pascal left to join Don Triggs’ Culmina in early 2013, shortly after this vintage was bottled (following 18-20 months in French oak). Challenging conditions in 2010 are said to have been managed well, yielding a wine John Schreiner described as bright, firm, and generously textured (thanks to a blend centered on 67% Merlot). With the 2010 added to my six-year vertical, the 2004 is now available for consumption! Swirl VQA Store $50

Nk’Mip 2012 Mer’r’iym: The Osoyoos Indian Band’s well known winery added a super premium red blend to their portfolio as of the 2008 vintage, leading to the demise of their solid Qwam Qwmt (Reserve) Meritage. However, the Mer’r’iym Meritage has garnered plenty of praise of its own, coming from a winemaking team long experienced with big reds. The 2011 vintage was actually skipped over, making this the fourth release, and the first to cut Cabernet Sauvignon below one quarter of the blend: Merlot leads for 2012 with 59%, with 12% Malbec and 6% Cabernet Franc. The wine was released at the winery back in May 2013, but some of the approximately 450 cases produced only showed up in stores recently. BC Liquor Stores $50

Culmina 2012 Hypothesis: Only the second release from a powerhouse winery that leapt out of the gate two years ago with a 2011 that Anthony Gismondi called “the best first release I can remember from a local winery.” The 2012, from a superior vintage, should be even better – John Schreiner deemed it a solid 92+ points. Tasting the 2011 and 2012 side by side would be quite revealing, considering the major change in proportions: the formerly leading Cabernet Franc is now only 19%, with Merlot taking charge at 57% – while Cabernet Sauvignon remains the same at 24%. The wine has been available for a few months, but the new vintage is only now starting to replace the 2011 on store shelves. Swirl VQA Store $50