A recent invitation to my Swirl Wine Store colleagues saw us thoroughly enjoying a vertical tasting of Laughing Stock’s Blind Trust Red. Six bottles and plenty of food left us sufficiently sated, and negating any need for a second vertical I had prepared, of Tinhorn Creek’s Cabernet Franc. Not wanting to down the bottles merely for the sake of imbibing, I retained them for a future tasting, which came about in short order just last weekend. A few other local examples and even an Ontario wine joined the tasting, but the focus was on evaluating and enjoying Winemaker Sandra Oldfield’s pride and joy. 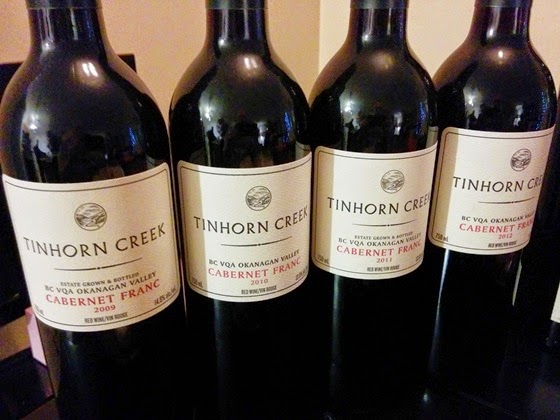 Although Tinhorn Creek’s President/CEO Sandra Oldfield actually passed on the winemaking reins to newcomer Andrew Windsor last year, she was fully in charge of producing the particular wines I was presenting. Sampling from a vertical of one wine from one winery, under supervision of the same winemaker each year, is a superb examination of vintage variation and the effects of bottle aging. The four years from 2009-2012 were a tumultuous range of vintages, ranging from the short but hot 2009 season to the second-coolest season on record only two years later. Fortunately 2012 marked the beginning of an exciting three-year trend towards more ideal conditions. With some historical awareness in mind we delved in to our enviable task.

Tinhorn Creek’s Cabernet Franc is consistently produced from the winery’s Diamondback Vineyard on the Black Sage Bench opposite their Golden Mile headquarters south of Oliver. The southwest-facing 100-acre property is planted primarily to red varieties that enjoy the additional 2-3 hours of daylight obtained versus the Golden Mile home vineyard. The Cabernet Franc vines found there are now two decades old, and the wine has been a staple of Tinhorn’s portfolio since the very early days. Each of the four vintages under examination experienced identical winemaking practices, with Sandra having dialled in the style over the years: full malolactic fermentation followed by 12 months aging in 2-3 year-old American and French oak barrels.

I double decanted each wine back into bottle and we began by tasting the 2009. The cool spring shortened the growing season that year, but the 1,627 Growing Degree Days measured in Osoyoos reveal a very warm summer and fall. The impressive ripeness led to an early harvest, which came in fortunately just before the surprise frost on October 12. High Brix led to high alcohol, as the yeast feasted on the sugar before fermentation to a nearly bone dry level. We immediately detected that boozy character on the nose and palate, whereupon a spicy chocolate character kicked in after leather hints. The flavour profile and long, fruity finish made it a good match for Oyama Chorizo, but overall it was considered a bit too brash.

The 2010 wine proved to be the star of the tasting in retrospect, with a very drinkable, elegant and smooth medium body. The flavour profile was awash in raspberry, black cherry, and hints of prune after two and half years in bottle. The lower alcohol was apparent, although ironically Brix at harvest was still the second-highest of the four wines despite what many consider to be a cool vintage. The October harvest likely took advantage of the late heat-wave that year, eeking out a bit more ripeness after the low temperatures experienced in September. Perhaps not coincidentally, 2010 was also the first vintage released of the new reserve-tier Oldfield Series Cabernet Franc, which took first place in the BC Wine Appreciation Society’s Cabernet Franc Blind Tasting this past February.

Another substantial pivot came about from the 2011 vintage. This very cool year (second only to 1999) resulted in the Tinhorn team delaying harvest until the end of October. Some brutal vineyard practices undoubtedly ensued that year (at least amongst the wise) to thin the crop enough for a useful harvest – a two thirds drop in production from typical levels attests to that fact. Quite telling is that nearly as much (Cabernet Franc) Rose as varietal Cabernet Franc was made at Tinhorn Creek that year! In tasting this third wine it presented more subtly on  both the nose and palate, with some meaty character and smooth cranberry and strawberry flavours. However, comments suggested it was a little too sharp, with the acidity insufficiently balanced by fruit.

Tasting the newly released 2012 gave us plenty of optimism, with fresh, bright fruit apparent immediately. The young wine was already smoothing out, while exhibiting a fuller, more pleasing texture than the previous vintage. Earthy character, spicy flavours, and some milk chocolate hints kept the palate interesting: the group consensus being that another couple of years in bottle should yield a 2010 competitor. The wine has already been awarded a silver medal at WineAlign’s National Wine Awards, and named Judges Choice at the subsequent World Wine Awards of Canada. It stands to reason that a 2012 Oldfield Series Cabernet Franc (expected in the coming year, with no 2011 vintage having been released) should be a further step up in quality, building on the initial success achieved in 2010. I look forward to enjoying many more excellent and intriguing wines from Tinhorn’s talented team!