Although maintaining budgetary restraint before the upcoming Vancouver International Wine Festival – and the acquisition opportunities it offers – is often necessary this month, a few collectibles must be mentioned. Upon review I was very pleased to have amassed a diverse range to launch the year, from Cowichan Valley Pinot Noir to Osoyoos Tannat. Any one of these exceptional wines would keep you warm in the crisp weather that remains in our midst, but could easily handle aging to even further greatness in the years ahead. 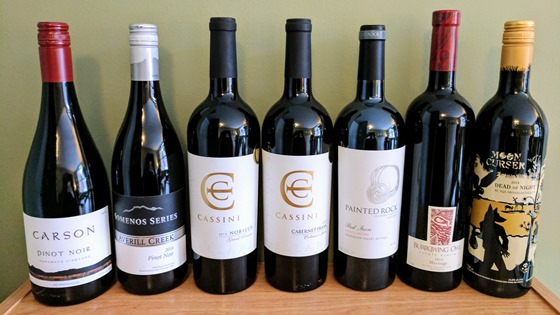 Carson 2014 Pinot Noir: When he isn’t delivering world class Chardonnay and Pinot Noir for the Meyer family in Okanagan Falls, Winemaker Chris Carson quietly releases small lots of his own-branded bottles. A mere 295 cases of Naramata Bench Pinot Noir came from a one and a half acre block in 2014, hand harvested and wild fermented before spending 11 months in (one third new) French oak. Carson makes no bones about the wine’s cellaring potential, listing an optimistic 15 years on the label, but he’s built up a lot of trust at Meyer that carries over to the personal brand he started in 2011. The Dijon 115 clone makes for what Anthony Gismondi feels is an “exuberant, fruity, spicy” wine even riper than the superb 2013 I was more than happy to acquire previously. Marquis Wine Cellars $40

Averill Creek 2014 Somenos Series Pinot Noir: It’s no secret Vancouver Island wines are a rarity in retail stores just a few kilometers across the Straight of Georgia. I get few opportunities to add the Island’s top wines to my collection, but jumped at the chance to piggyback on a friend’s case order for this extreme rarity. Already highly respected for his complex and finely crafted Pinot Noir, Proprietor Andy Johnston stepped up his game recently with the new premium-tier Somenos Series. The inaugural Pinot Noir is the Cowichan Valley’s bold, earthy, rich expression of the grape, and a wine Anthony Gismondi puts in contention for the Island’s best Pinot Noir yet. Keep your eyes peeled to see if any of the 300 cases make it over to the mainland. Winery Direct $44

Cassini 2013 Grand Reserve “Nobilus” Merlot: I stopped by Cassini Cellars’ convenient roadside Golden Mile winery late last year just as three new premium reds were released. Despite having closed the tasting room for the season proprietor Adrian Cassini generously took time away from several recently-arrived bins of (immaculate) grapes to ring in my enthusiastic purchase. The Merlot is his smallest lot of the batch, with only 187 cases produced after two years in new French oak, and was named best in class with a Double Gold at the 2016 All Canadian Wine Championships. John Schreiner focused on the new “high calibre” reds in his December review, finding the Merlot worthy of 92 points amid mention of its superb aging potential. Winery Direct $40

Cassini 2013 Collector’s Series Cabernet Franc: The new follow-up to last year’s Lieutenant Governor’s Award-winner has continued the tradition of excellence, taking home a Gold medal from the All Canadians last spring. It’s hard not to be taken in by Liam Carrier’s recent enthusiasm for the “stunningly beautiful” and utterly unique profile that evokes the coasts of California and Australia. Mention of the Cabernet Franc goes hand in hand with the equally superb 2013 Cabernet Sauvignon (“The Aristocrat”), bought from the winery at the same time. Last May the 2012 vintage received 94 points and a Best in Class nod from the Los Angeles International Wine Competition; the 2013 is already equally highly regarded: 93 points from John Schreiner parallels Wine of the Year praise from the fans at IconWines. Winery Direct $34

Painted Rock 2014 Red Icon: Although 1,153 cases were ultimately produced of this top tier red from the Skaha Bench, it remains a preeminent collectible alongside other smaller lot rarities. Given the wine’s cachet it can often be just as hard to come by as much more limited bottles, resulting in an early release when the Painted Rock tasting room ran out of 2013! The (thoughtful) roller-coaster blend in Red Icon upped Malbec and Cabernet Sauvignon this vintage, to combine 33% Merlot, 21% Cabernet Franc, 19% Malbec, 16% Petit Verdot, and (still only) 11% Cabernet Sauvignon. The established oak regime using just 30% new barrels should let the ripe 2014 fruit shine, even over the long haul (where the wine really excels). John Schreiner sought to “stay one step ahead of Decanter” (where Painted Rock’s wines are increasingly reviewed quite favourably) with a taste in September, complimenting the svelte polish with 94 points of praise. Winery Direct $55

Burrowing Owl 2013 Meritage: With the arrival of 2013, the days are numbered for 2007 in my cellar – the old must make way for the new, and a decade is long enough to slumber. Needing room for the newest vintage is great motivation for drinking up its well-aged ancestors. After at least fourteen vintages of Meritage this legendary Black Sage Bench winery is one of the few to retain the trademarked nomenclature for their flagship red. The name is technically accurate, given the blend of 39% Merlot, 28% Cabernet Sauvignon, 20% Cabernet Franc, 10% Petit Verdot, and 3% Malbec, so why fix what isn’t broken. The components spent a total of 21 months in barrel (18 separately before blending), ensconced within a complex mix of European and American oaks of various ages. Finding a few bottles at retail level is unusual, but Burrowing Owl seems to be loosening up their notoriously tight grip in favour of greater shelf presence these past couple years. Firefly Fine Wine & Ales $58

Moon Curser 2014 Dead of Night: Chris Tolley’s commitment to – and success with – Tannat has yielded one of BC’s most unusual and desirable wines. Although uncommon varieties are prevalent at the Tolley family’s Osoyoos winery this equal-parts blend of Syrah and Tannat is considered the icon, and well known for its rich intensity. In 2014 the terrific growing season was a boon to heat-loving reds: one of the Tannat lots – a blend of both estate vineyards – came in at nearly 28 brix! After what must have been an exciting fermentation, the components aged in French and Hungarian oak for one year, with just 25% of the barrels being new. Bottled last March at a generous 14.6% declared alcohol (and nearly 3g/L of sugar remaining) it should age wonderfully under screwcap despite the fine and soft tannins said to exist at present. I’m in no rush as the 2009 vintage stares me down from the wine fridge. Winery Direct $43