One of the largest gatherings of Canadian wine was shared with lucky locals at this year’s Vancouver International Wine Festival, featuring a national focus to mark our sesquicentennial celebrations. While numerous charming Ontario and Nova Scotia contributions were on hand, the Festival’s on-site BC Liquor Store carried particularly generous reams of rarities and pre-releases from BC’s top wineries. For those looking to jump the line, the Festival offered notable advance purchasing opportunities. I took advantage of the occasion to stock up on some excellent cellar-worthy reds amongst other gems. 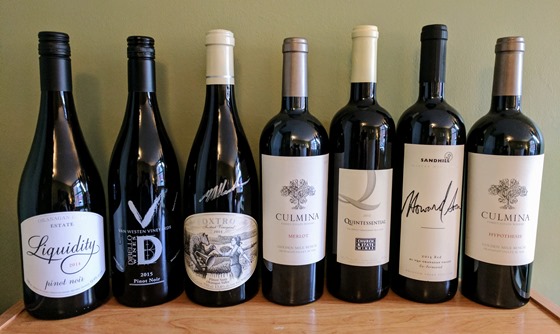 Liquidity 2014 Estate Pinot Noir: The young Okanagan Falls winery helmed by  experienced cross-Canadian winemaker Alison Moyes produces no less than three Pinot Noir from mature vines in ideal terroir. Five different clones were blended to yield the workhorse version, the only one remaining in stock before release of the 2015 vintage. While small lots of the higher tier Reserve and “Equity” bottlings sold out in short order at least some of the Estate’s 910 cases remain for sale. In spite of what may seem to be an entry-level price point, the wine was one of six BC Pinots to garner Gold at the National Wine Awards last summer. Second only to one (of three) from neighbouring Meyer Family Vineyards, Liquidity’s offering was the best value amongst those top drops, accompanied by a slew of compliments from the judges, including optimism for its aging potential. VIWF BC Liquor Store $30

Van Westen 2015 “VD” Pinot Noir: Since 2011, Naramata’s Robert Van Westen has been producing a collaborative Pinot Noir with industry veteran Tom DiBello. The resulting wine, cheekily named VD, is released annually on Valentine’s Day, and the newest now gives me five vintages merrily aging away. In Rob’s bigger red portfolio the VD is an outlier next to a series of Bordeaux varietals and blends, and always shows up in the smallest numbers: just 86 cases were eventually bottled from the warm 2015 vintage. The bountiful conditions that year have resulted in a more fruit-forward wine than previous iterations, with fewer earthy notes in favour of generous ripe fruit and toasty spice. It remains on the fuller side of Pinots, dark and rich, for fans of a more intense style, but still retains floral aromatics to remind you of its provenance. Winery Direct $40

Foxtrot 2014 Foxtrot Vineyard Pinot Noir: After ten vintages the Allander family’s Burgundian icons have become a benchmark in BC, and the newest release launches their second decade from a position of great strength. John Schreiner’s recent update on the winery’s progress includes extensive coverage of Foxtrot’s growing international presence, and substantial vineyard expansion. The flagship wine in the growing portfolio is the Foxtrot Vineyard Pinot Noir, from the original estate plantings on the Naramata Bench. It should come as no surprise that Winemaker Gustav Allander has continued to work wonders with the exceptional fruit, providing for Schreiner’s easy 93-point score from an elegant and seductive wine that “is appealing to all the senses.” Apart from ordering case lots from the winery (where there is no tasting room), the bottles for sale at the Wine Festival were the best prices in town; lucky shoppers snapped up signed bottles with rapidity. VIWF BC Liquor Store $59

Culmina 2014 Merlot: After the Triggs family’s ambitious new project launched with the 2011 vintage Culmina tripled the red portfolio last year by introducing the first varietal wines to accompany the Hypothesis blend. The second varietal vintages were on hand at this year’s Wine Festival, including new Cabernet Franc, alongside existing Cabernet Sauvignon and Merlot. The 2014 Merlot was the only one actually for sale, but still a lucky break as formal release (and final pricing) is not anticipated until June (to provide for a full year of bottle age). Little surprise it’s still young and tight, but the move towards less new oak as the winery ages is a great thing: last year’s 50% new French is now just 15%, letting the Golden Mile Bench fruit shine even brighter after 16 months in barrel. With anticipated aging of at least several years, I’m holding mine until the twenties. VIWF BC Liquor Store $36

Church & State 2013 Quintessential: The icon wine from Church & State has bounced around vintages lately, and 2010 is in fact the current release, with 2013 anticipated later this year (and 2011 and 2012 sold previously). Vintage variation leads the decision to bottle age as necessary, regardless of envisioned schedule. Finding the pre-release 2013 at the Wine Festival was a perk not to be missed: a taste poured by Marketing Manager John Pullen greatly impressed thanks to robust integration of the complex blend. The Merlot, Cabernet Sauvignon, Petit Verdot, Malbec, and Cabernet Franc came from three distinct south Okanagan vineyard benches (Golden Mile, Black Sage, and Osoyoos East), aged in one third new French oak before 475 cases were bottled. Fans will be glad to know that’s a heck of a lot more than the 100 cases of 2012 that took home a Lieutenant Governor’s Award in 2015. VIWF BC Liquor Store $56

Sandhill 2014 Soon Series Red: I was lucky enough to visit the beautiful, recently-renovated Kelowna tasting room of Sandhill during precisely the right time last July, and snagged the ultra-rare inaugural “Soon Series” wines. A step up from the already exclusive Small Lots series, the Soon Series pay homage to long-time Head Winemaker Howard Soon, whose signature prominently graces the crisp white label. Like last year, a mere 50 cases were made of the second vintage, and it was generously being sampled and sold at the Wine Festival; I was thrilled with the dark berries and chocolate flavours amongst very fine, ripe tannins. The unusual blend includes 71% Cabernet Sauvignon, 16% Petit Verdot, 8% Malbec, and 5% Merlot, aged in new French and American oak for 22 months after co-fermentation. Currently available and in stock exclusively at the Kelowna tasting room, it doesn’t even appear on the Sandhill website! VIWF BC Liquor Store $69

Culmina 2013 Hypothesis: While the varietal reds at Culmina get a year of bottle age, the blended Hypothesis has at least two years time to contemplate its fate. That being said, Don Triggs didn’t miss the opportunity to submit his third vintage for review just after bottling in 2015, and even that young Hypothesis struck a chord. WineAlign’s top talent thrice provided 91+ point accolades as early as November 2015, praising the depth, balance, and elegance at present despite significant aging potential. Like the Merlot, oak treatment has changed as the winery has more used barrels with which to work: 70% new oak in the second vintage has stepped down to 60% in year three. Eschewing any additional varieties, the blend is a minimalist Bordeaux red, with 38% Merlot, 36% Cabernet Franc, and 26% Cabernet Sauvignon, harvested from the Golden Mile estate. With just a single bottle at hand, I hope to obtain more during the winery’s anticipated fall release later this year; my growing vertical is edging up in size! VIWF BC Liquor Store $44