Most of the exceptional BC wines amassed this month are brand new releases. That’s not to say they will be easy to find, as nearly all represent extreme rarities, but every one is well worth tracking down. They range from a single barrel of an experimental variety never before seen in Canada, to the first vintage of a long-awaited flagship for a winery about to make a major transition. The beginning of fall represents a chance to celebrate the harvest with past years’ finest, and a great opportunity for collectors. Not to mention every winery is now finding themselves in need of cellar room for another celebrated vintage! 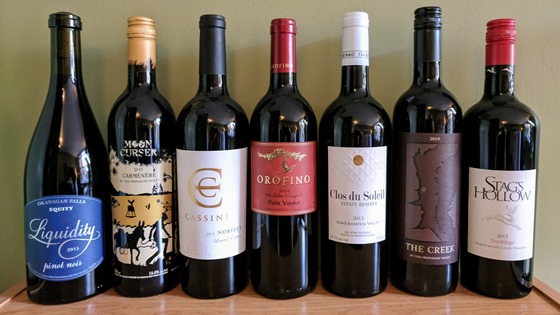 Liquidity 2015 Equity Pinot Noir: After some time in bottle, the inaugural 2014 flagship Equity was awarded a silver medal at Mondial des Pinots this month. Of course, that vintage is long since sold out, and this year’s sequel is approaching the same status. In lieu of clone 667 as per last year, the 2015 blends clone 828 with clone 115 from vines fruit-thinned to just one and a half tons per acre to yield 125 cases - prioritized for wine club members. After spending 15 months in (36% new) French oak the release this spring has left very little remaining in the Okanagan Falls wine shop. A pattern is forming at Liquidity, with the Equity being noticeably darker-fruited and more structurally intense than the Estate and Reserve tiers, immediately apparent upon tasting them side-by-side, and something Treve Ring noted last year as well. Winery Direct $64

Moon Curser 2015 Carménère: Although it is included amongst the traditional components of Bordeaux, few Canadian wineries bother to include this challenging grape in their red blends, and only a mere handful of single varietal examples exist. While Black Hills doesn’t even sell theirs outside the wine club, Moon Curser has managed to produce nearly 300 cases from a banner year for Osoyoos East Bench vines in their eleventh leaf. The wine was aged in a restrained 25% new French oak after malolactic fermentation, before bottling in March. For sale since early summer, this Gold Medal winner at the Okanagan Spring Wine Festival provides one of the rare opportunities to sample Canadian Carménère; an exciting chance to test out Winemaker Chris Tolley’s impression of “plum, green peppercorn, ripe raspberry, and fennel seed.” Winery Direct $43

Cassini 2014 Nobilus Merlot: Adrian Cassini’s 2013 Merlot is one of two wines for which he received the Lieutenant Governor’s Award this summer, after it was named Best of Varietal at the Okanagan Spring Wine Festival (and Best of Category at the 2016 All Canadian Wine Championships). Needless to say, the 2013 vintage is sold out, but fortunately the 2014 was quietly released last month, all 125 cases worth (it’s always a “Limited Edition”). Coming from what Cassini describes as an usually cold growing season it offers a very elegant nose and grippy but fully ripe tannins in the delicious palate, where 15% alcohol dwells despite the cooler temperatures. The grapes come from Oliver’s Bella Vineyard (not to be confused with Naramata’s Bella Winery), and are said to have spent a full two years in new French oak before bottling, and then several months in bottle while fans patiently awaited their opportunity. Winery Direct $40

Orofino 2014 Petit Verdot: While not nearly as rare as single varietal Carménère, Petit Verdot is still primarily reserved for blending, and not often seen on its own, anywhere for that matter. Cawston’s Orofino Vineyards last released a Petit Verdot from the 2010 vintage, preferring instead to integrate the small amount they receive from the neighbouring Hendsbee Vineyard into their Beleza blend. It would seem that aficionados got lucky in 2014, as enough remained after blending to allow for 75 cases to be assembled, introduced firstly this month to members of the winery’s Collector’s Club. I myself was certain to pick up a bottle while present at the winery on the very day it was released! A bottle of the 2010 vintage enjoyed a couple years back was superb, with strong juicy acidity that should keep it lively for years to come, just as the 2014 is a prime long-term cellar candidate. Winery Direct $45

Clos du Soleil 2013 Estate Reserve Red: While the more prevalent “Signature” is considered the popular flagship red at Clos du Soleil, the smaller lot Estate Reserve is crafted in an even more cellar-worthy style, and sourced exclusively from the organic home vineyard on the Keremeos Upper Bench. Just 200 cases of 50% Cabernet Sauvignon, 37% Merlot, 8% Cabernet Franc, 4% Petit Verdot, and 1% Malbec were aged for 18 months in French oak before extended bottle-aging (a year beyond that of the Signature). My bottle came on the fall equinox as part of my bi-annual Wine Club shipment, alongside a bevy of other brand-new reds. With a long life ahead of it the wine will need even more time to mature and knit together – perhaps why it “only” received a Bronze Medal at this year’s National Wine Awards. Nevertheless, Judge Michael Godel felt 90-points appropriate for what he saw as a Bordeaux ringer: “cool and minty, with espresso and dark bitter chocolate...well-positioned, purposed, and appointed.” Winery Direct $60

Tinhorn Creek 2014 The Creek: Just weeks after Tinhorn Creek President Sandra Oldfield introduced her winery’s new flagship wine (23 years in the making) news emerged that she and her partners had sold the winery to Peller and she was departing. With the upcoming sale undoubtedly being negotiated at the time, the launch party must have been bittersweet for Sandra. Perhaps it is apropos that new winemaker Andrew Windsor crafted the inaugural and subsequent vintages, having taken over the role from her in 2014 with Sandra’s blessing. In contrast to Tinhorn’s typical focus on Merlot, (Black Sage Bench) Cabernet Sauvignon leads “The Creek”, comprising more than half the blend with 19% Merlot, 17% Cabernet Franc, 9% Malbec and 2% Petit Verdot, all aged for two years in (40% new) French and Hungarian oak. Early reviews of the 1,475 case production at GismondiOnWine have been very positive, noting the balance and elegance in what is deemed to be an age-worthy wine with strong potential. Winery Direct $63

Stag’s Hollow 2015 Teroldego: Honestly, unless you’re a member of Stag’s Hollow’s Wine Club, or are lucky enough to visit their (brand new) tasting room in the next week, you’ll never see this wine. Only a single barrel came from Winemaker Dwight Sick’s first harvest of this esoteric grape planted in the winery’s young Okanagan Falls “Shuttleworth Creek” vineyard, where it grows alongside Dolcetto. After sending the vast majority to Club members this month a few cases remain for sale in the Stag’s Hollow wine shop to celebrate the Fall Wine Festival. Impressively, Dwight feels it is the best wine on hand at present, despite having recently released 2016 Grenache, 2015 Syrah, and the highly anticipated 2014 Renaissance (Reserve) Meritage – so that speaks volumes! Subsequent vintages are expected to increase in volume, but not massively so, making it very much a prime pinch for wine geeks. Winery Direct $40