A crush of fall club orders and some recent winery visits offered more than enough candidates for the cellar this month. These collectibles include some iconic BC blends and two pairs of classic varietals, in quantities ranging from petite to prodigious. Some will no doubt prove supremely challenging to track down outside their home range, showing once again the necessity of going straight to the source when seeking out the most intriguing bottles. With harvest underway and all hands on deck at this time of year, sales can take a backseat, meaning winery websites aren’t updated and rare new vintages are sometimes released with little fanfare. It’s up to aficionados to do the legwork in tracking down the best new drops. 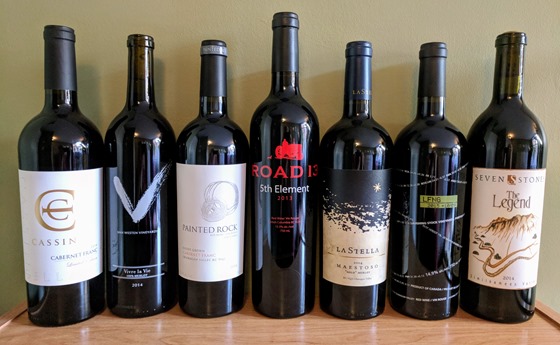 Cassini 2014 Cabernet Franc: I optimistically stopped by Cassini’s road-side tasting room outside Oliver just as this gorgeous Cabernet Franc was being released and opened for tasting. The rich, purple-fruited nose carried into an equally intense palate showing fine ripe tannins, juicy acidity, and lip-smacking milk chocolate – a fine follow-up to the Gold-medal-winning 2013. Even after tasting and purchasing, I could still taste the extra long finish minutes after departing! Like previous vintages the fruit comes from the west-side Bella Vineyard, and maintains the same production of about 300 cases, which include the addition of 5% Merlot. Adrian Cassini likes to age his reds a bit longer than most, so two full years in new oak (80% French) is the go-to strategy in this case; but of course it can easily mature in bottle for a few more years, just as mine will. Winery Direct $40

Van Westen 2014 Vivre La Vie Merlot: Although the portfolio of wines crafted by Rob Van Westen have expanded over time, small production quantities are still the norm from his rustic Naramata winery. Several different small vineyards enable him to obtain the right varieties from suitable terroir, allowing for rich Merlot like the full-bodied “Vivre La Vie”, already almost sold out. Just 148 cases were bottled, but even before the late summer release the wine took home Double Gold/Best of Category honours at the spring All Canadian Wine Championships. Later in the summer, judges at the National Wine Awards recognized a “textbook Merlot” when delivering a high Silver medal score. The firmly structured tannins and toasty oak influence will benefit from time in bottle – Rob’s reds are consistently prime cellar candidates. Don’t miss the mere 77 cases of 2014 Cabernet Franc (“Vulture”) that were released last month as well, to which the All Canadians awarded another Gold. Winery Direct $30

Painted Rock 2015 Cabernet Franc: John Skinner’s Skaha Bench winery has developed an admirable, focused portfolio of red wines (plus a dynamite Chardonnay), but the recent addition of small lot varietal Cabernet Franc is turning heads even further. The stately Red Icon flagship and cult collectible Cabernet Sauvignon retain their status, but it’s about Franc that John is most excited. Now in it’s third vintage, the Franc – plus even smaller lots (I.e., 150 cases) of Malbec and new Syrah-Cabernet Sauvignon – is made possible as the mature vineyards now yield sufficient fruit after blending the Icon. Revered consultant Alain Sutre is equally thrilled about Cabernet Franc, suggesting it is this variety above others in which Painted Rock will make a mark internationally. As the winery is quick to point out, Decanter magazine has already featured the first vintages no less than thrice, and they’re only getting better each year as experience brings finesse. Winery Direct $52

Road 13 2013 5th Element: Restraint from Road 13 means the flagship red blend from the 2013 vintage was only recently released, offered to members of Club 13 as part of their autumn shipment. Adding a bottle from the 852 cases produced fleshes out my six-year vertical, starting in 2007 (as no 2008 was produced), and showing the entertaining label changes over the years. The proprietary blend is intended to combine the traditional Bordeaux reds with stellar Syrah – 18% in this case, added to 45% Merlot, 19% Cabernet Sauvignon, 13% Cabernet Franc, and 5% Petit Verdot. Nearly two thirds of the grapes originate from the extraordinary Blind Creek Vineyard in Cawston, with the remainder grown at the home vineyard on the Golden Mile. The structured 2012 received Gold at this year’s National Wine Awards, but the newest vintage is more approachable in its youth: a ripe, stewed palate and long rich finish make it hard to justify cellaring but it certainly won’t hurt in the medium term. Winery Direct $49

LaStella 2014 Maestoso: I have to admit I’m late to the party, as this vintage is already sold out, but don’t let that discourage you from scouring retail shelves – I certainly would! The flagship “jewel-in-the-crown” from Osoyoos-based LaStella is the monumental Merlot on which the winery admits, “no expense is spared.” Just 217 cases were produced from Osoyoos Lake district and (11%) Golden Mile fruit that spent 18 months in French oak, one third new and half on its second fill. While admiring the dense structure and spicy fruit, Anthony Gismondi offered this vintage his highest score yet with 93 points. Another 91 points of praise came from co-author Treve Ring, herself already eager to cellar and try again in five years. At WineAlign, a pair of 92-point scores this spring helped to remind readers Maestoso is “one of the top Merlots in the country to be sure.” Winery Direct $103

Laughing Stock 2015 Portfolio: The benchmark red blend from Laughing Stock is rightfully one of BC’s most well-known cult wines, and the annual October release is cause for celebration. As usual, members of the Preferred Share Wine Club get priority, so I knew to expect a small allotment in my mixed case. Pleasantly surprising me were a full three bottles, allowing an early peek at one I shared with Valerie Stride from Demystified Vine. We were mightily impressed with the complex profile and silky texture belying the wine’s youth; smelling cedar, blackberry, vanilla, and dark chocolate before more striking blackberry flavours accompanied by plum, dark cherry, and hints of white pepper. My remaining two bottles are set for the cellar and a growing vertical, but honestly it’s very inviting at present. Fortunately, a full 2,500 cases were produced, but don’t expect it to last particularly long, especially not with the holiday gift-giving season approaching. Winery Direct $52

Seven Stones 2014 The Legend: George Hansen’s Cabernet-heavy blend from the south Similkameen Valley comes with significant aging potential, and the newest vintage continues construction on another vertical. Usually about half Cabernet Sauvignon, this year it’s 50% on the dot, with another 30% Merlot, 12% Petit Verdot, and 8% Cabernet Franc, from the cellar’s best barrels. Unlike the larger quantities of very nice Meritage George puts out after lengthier bottle aging, his flagship red is released to loyal followers almost immediately, with the expectation they have their own self-control. It won’t sell out too fast, despite only 204 cases produced, as George’s varietal reds and well-priced Meritage are just so good it’s hard to upsell many to The Legend! The big, thick bottle can be a little intimidating, but it’s going to look great lined up with its brethren as they rest away the years. Winery Direct $50