There’s no doubt that visiting BC wine country in the winter is a touch more challenging – every route from the coast takes you through remote mountain passes with threatening weather conditions. After an uncommonly harrowing journey, my safe arrival in Osoyoos over the holidays facilitated some acquisitions of the year’s final new releases. Few wineries remain open throughout the season, but the number is growing as more people enjoy the opportunity to witness a region transformed; and there’s always new wines to be had! While the temptation may be present to crack open some of these hefty red rarities, further time in the cellar will yield dividends to enjoy for many winters to come. 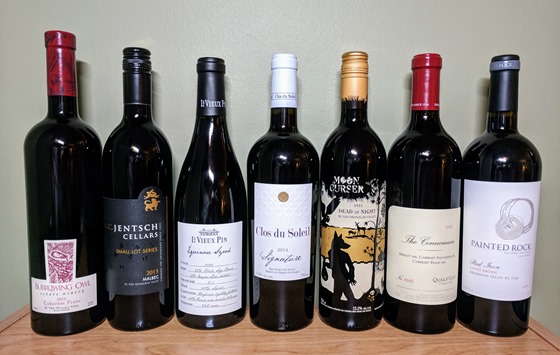 Burrowing Owl 2015 Cabernet Franc: Just released, this ever-so-youthful wine has big shoes to fill, as the preceding vintage received a Lt. Governor’s Award just this summer, the second one for Burrowing Owl’s Franc in just five years. The winery seems quite pleased with the vintage, calling it “a grape grower’s dream come true,” leading up to harvest in the latter half of October, before the wine spent 18 months aging. Barrels were three quarters French oak, with the balance American and Hungarian, slightly more than one third of it new or one-year-old. I intend to age mine further into the next decade and allow maturity to better express the complex profile, elements of which are touched on by WineAlign Judge Michael Godel in his 91-point review. Time will mellow “enough wood spice to smoke a shoulder,” and provide elbow room for the lengthy, expressive black currant, tobacco, and pepper. Winery Direct $33

C.C. Jentsch 2015 Small Lot Malbec: There are few (but growing numbers of) varietal Malbec from BC, and those that exist are always small lot productions, seeing as most grapes are incorporated into Bordeaux-style blends. The third vintage from Chris Jentsch and his talented Winemaker Amber Pratt continues their highly successful practice of reserving a few precious barrels to bottle independently, and they managed to eek out 100 cases in 2015 (double that of the inaugural 2013). Fruit was sourced from Jentsch’s Golden Mile vineyard near Road 13 and the winery home vineyard at Testalinden Creek, aged in American and Hungarian oak for 16 months. The Golden Mile property was sold this year however, so the challenge ahead will be to maintain sufficient production quantities given the growing demand. The wine has already racked up a pair of Gold medals in competition from both Intervin and this fall’s BC Wine Awards. Winery Direct $57

Le Vieux Pin 2014 Equinoxe Syrah: Recent releases seem dominated by the 2015 vintage, but there still exist a small proportion of bottle-aged earlier wines. The super-premium, icon wine at Le Vieux Pin experienced generous aging in French oak barrels and puncheons, and then in bottle, before its recent release on the cusp of 2018. More than half the oak was new, but the blend of low-yield Black Sage Bench and Osoyoos East Bench fruit can handle it with ease, especially from such a fine vintage. With barely two tons per acre harvested, only 242 cases were produced, but some of the country’s top critics have already tried it out to great acclaim. At WineAlign numerous 94-point scores sing praises for the wine’s elegance and outstanding length, with Michael Godel finding texture and acidity so balanced as to render it “peerless” in stature amongst BC Syrah. Winery Direct $103

Clos du Soleil 2014 Signature: Club members received first crack at Winemaker Michael Clark’s newest flagship in their autumn equinox shipment. Grapes from the Keremeos home vineyard and elsewhere in the Similkameen were aged 17 months in French oak, and the best 29 barrels were selected to produce 725 cases, blending equal parts Cabernet Sauvignon and Merlot with 14% Petit Verdot, 8% Cabernet Franc, and 3% Malbec. Signature has established itself in relatively short order as one of BC’s finest red blends, while still under the radar compared to cult wines of the Okanagan. Newly reviewed this month by Anthony Gismondi & Treve Ring, this vintage marks the third in a row to receive 92-points of commendation from GismondiOnWine, where it’s said to possess “elegance and authenticity throughout, with surprising depth at this youthful age.” Winery Direct $45

Moon Curser 2015 Dead of Night: Although several of this adventurous Osoyoos winery’s exclusive reds are presently sold out, the remainder have much to offer, chief among them being the newest vintage of a Syrah/Tannat blend found nowhere else in Canada. The hot and heavy 2015 season yielded Tannat at an impressive 25 Brix, but Proprietor Chris Tolley is quick to reassure fans it still retains bright acidity. The freshness found in a potentially brawny red is something noted by Anthony Gismondi, in his 90-point November review that found “much more elegance than we are used to here.” The smoky summer and subsequent disease pressure led Chris to drop fruit and aggressively thin the canopy, so production quantities are actually slightly decreased, with 317 cases available after 14 months in French and Hungarian oak, about one quarter new. The recent Great Northwest Invitational awarded two of BC’s sixteen Gold medals to Moon Curser, for Dolcetto 2016 and Dead of Night 2015. Winery Direct $43

Quails’ Gate 2015 The Connemara: It’s starting to look like I’ll have to begin a new vertical collection, as the second vintage of this new icon red fashions itself a permanent spot in the Quails’ Gate portfolio. Although best known for Burgundian varieties, Quails’ Gate has been delving into a broader spectrum of reds with earnest since Bordeaux-trained Nikki Callaway took over winemaking duties in 2013. The inaugural Connemara 2014 received a Gold medal at the National Wine Awards this summer, although the judging team had a taste of 2015 just last month. The blend has changed to favour Cabernet Franc with 40%, supported by Cabernet Sauvignon and Merlot in equal proportions, all aged for 18 months in French oak, but awaiting another decade in bottle. John Schreiner suggested just that while complimenting the wine’s “exceptional polish and elegance” in his 94-point review, alongside admiration for Nikki’s other 2015 reds. Winery Direct $69

Painted Rock 2015 Red Icon: Winery owner John Skinner could probably sit back and let his highly successful wine sell itself at this point, but he isn’t one to rest on his laurels. The newest release of Painted Rock’s flagship blend has already been distributed for wide review, and well publicized. Mid-November the WineAlign team looks to have shared a bottle, with the resulting reviews coming to the same effusive conclusion in praise of the wine’s intense and quintessentially BC character: “there is a brightness and generosity here missing in many Canadian reds” says David Lawrason. Having settled on 30% new French oak, John and his team managed to push out a generous 1,500 cases from 2015, following a blend they’ve established with Merlot (45%) and Cabernet Franc (24%) in the lead, joined this year by 11% Malbec, 11% Petit Verdot, and a mere 9% Cabernet Sauvignon. Don’t let the record-high quantity fool you, as the Icon easily sells out every year given the rock-solid track record it’s assembled. Winery Direct $55