The hectic holiday season is behind us but there are plenty of stellar gift-worthy wines still on hand – and a gift to oneself is perfectly legitimate. Even though the tasting rooms in wine country are closed for the season, online stores are open year-round, plus the many fine wine retailers around home are always happy to help the cause. In the case of one collectible, it’s exclusively available at retail, as Chris Carson is nearly too busy making wine to sell it! This month’s selection features several marvellous, under-the-radar examples that will find a comfortable home in my cellar, in many cases building on multi-year verticals as I find myself coming back for another vintage. 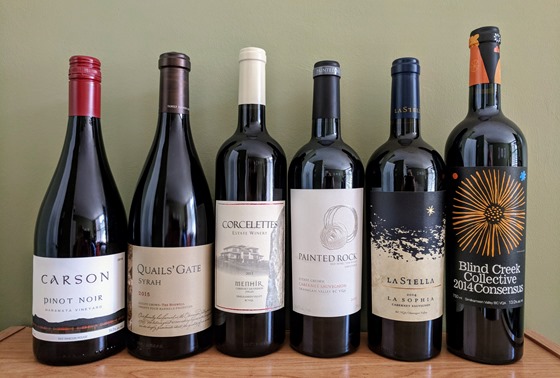 Carson 2015 Pinot Noir: For the past decade, the highly respected Pinot Noir of Meyer Family Vineyards has been ushered into bottle by the talented Chris Carson, who also produces his own “garagiste” wine with very little fanfare. A twenty-year-old 1.5 acre block of Clone 115 on the Naramata Bench yields a mere couple hundred cases that Carson vinifies at Meyer’s Okanagan Falls winery. The winemaking is described as “very traditional” and includes an indigenous yeast ferment followed by 11 months aging in one-third new French oak. Every year a sample bottle makes its way to Anthony Gismondi, who bestowed another 90+ score for the third year running in October: Carson’s “hedonistic” style serves up “juicy, red fruit with a savoury, spicy undercurrent.” Marquis Wine Cellars $50

Quails’ Gate 2015 Syrah “The Boswell”: Four years after introduction as a (one-time) special edition anniversary series wine, Syrah has grown to become a notable component of the Burgundian-focused portfolio at Quails’ Gate. The Northern-Rhone-styled wine represents a rarity in that it hails from estate vineyards in West Kelowna, in contrast to the extensive plantings of Syrah found in the South Okanagan. Outsider status notwithstanding, The Boswell continues to garner serious accolades every year: Anthony Gismondi and Treve Ring had nothing but praise in October and November, John Schreiner conveyed his approval with 93-points, and WineAlign’s David Lawrason was similarly impressed with the perfectly ripened fruit and impressive focus. After working through the last of the (equally good) 2014 the winery is finally ready to release the 580 cases bottled last June following 18 months in French oak. Winery Direct $63

Corcelettes 2015 Menhir: Named after marker stones found on the Baessler family’s original farm in Switzerland, the reasonably-priced flagship at Corcelettes eschews the typical Bordeaux blends for Cabernet-Syrah. The components hover around the same proportions annually, coming in at 60% Cabernet Sauvignon and 40% Syrah in 2015, mellowed for 16 months in French oak puncheons, to yield just 145 cases. Previous vintages were sourced from the winery’s original Middle Bench Vineyard in Keremeos, but since taking over the former Herder property on Upper Bench Road, the new home vineyard provides fruit from up against the sun-baked hills. John Schreiner had an advance taste in September and confirmed it remains a “round and generous wine” worthy of 93 points. Winery Direct $35

Painted Rock 2015 Cabernet Sauvignon: One could say that every vintage of John Skinner’s Cabernet since that first Lieutenant Governor’s Award-winning 2007 has been sold out upon bottling. Ironically the winery’s recently introduced varietal Cabernet Franc is arguably more noteworthy, but, Sauv still sells. That’s not to say the Sauvignon is unworthy of the attention - this is one of the region’s finest, must-have versions for collectors - it’s just hard to find outside the winery! Production only reached 328 cases in 2015, after 18 months in 30% new French oak, and while some additional rows were recently planted, those younger grapes are going into the exciting new Syrah-Cabernet. The red hot 2015 sunshine seasoned this vintage with “savoury, black cherry fruit and warm, brown spicing,” in the words of Anthony Gismondi: his 90-point review makes the case for patience however – if you can find a bottle hold on for even greater rewards in 2022. Winery Direct $40

LaStella 2014 La Sophia Cabernet Sauvignon: Painted Rock’s Cabernet is prevalent compared to the mere three barrels from LaStella in 2014. Just 75 cases are available from this excellent vintage, harvested from the famed U2 block of Inkameep Vineyard in the north end of the Black Sage Bench. Like the winery’s Maestoso Merlot, this super-premium bottle comes with a price to match, reflecting both the work that goes into it, and the wine’s status and prestige – at least the price slows down sales to give collectors a chance! Having tasted past vintages of La Sophia I’m willing to splurge for a bottle of this deliciously rich but focused wine; the winery suggests it “draws a comparison to the great Cabernets from Washington State rather than the plusher and fatter examples from Napa Valley.” Winery Direct $103

Blind Creek Collective 2014 Consensus: After just one year the Similkameen project of Road 13 and partners has already been forced to rebrand when their original name, “The Similkameen Collective” fell afoul of regulatory authorities (appellation names apparently can’t be part of wine names). The change makes the inaugural vintage of their Bordeaux blend a collectible aberration, but for 2014 the name serves to better reflects the site anyway. The 100-acre Blind Creek Vineyard in Cawston has contributed stellar grapes to many of Road 13’s award-winning wines (and those of other wineries across BC). Consensus brings together 148 cases of 36% Merlot, 33% Cabernet Sauvignon, 22% Cabernet Franc, 8% Petit Verdot, and 1% Malbec, recently bottled after 36-months in French oak. Seeing as BCC has next to no web presence and the premium-priced wines are currently sold on the side in the Road 13 tasting room, Consensus makes for the ultimate insider collectible. Winery Direct $60