A broad range of special wines made the grade for collectible status this month, centered around a pair of excellent Merlot that stood out in the recent BC Wine Appreciation Society Blind Tasting. A duo of Pinot Noir from the central Okanagan join the fun, as do a couple tasty red blends, all with great cellar potential. Most of these collectibles are generally available, but my own membership in the clubs at several wineries has greatly facilitated acquisition, particularly for the fully allocated production of Blue Mountain. Increasingly, the most interesting BC wines can be exclusively sourced direct. 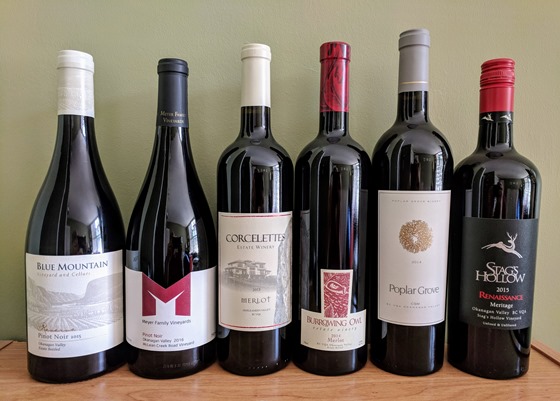 Blue Mountain 2015 Reserve Pinot Noir: Practically the benchmark for Pinot Noir in BC (let alone at that price), the Blue Mountain Reserve has been going strong for decades, from Okanagan Falls vines up to 30+ years old. The Mavety family took everything 2015 threw at them and still produced a fine Pinot Noir from an unusually warm vintage. The grapes were harvested relatively early, in the first week of September, and the wine manages a moderate 12.5% alcohol after native yeast fermentation (and 16 months in French oak). David Lawrason praised the balanced presentation in his 93-point review on WineAlign, noting the complex profile and outstanding focus and length. Winery Direct $40

Meyer 2016 McLean Creek Road Pinot Noir: The McLean Pinot is the core of Meyer’s portfolio, coming as it does from the home vineyard in Okanagan Falls. Production quantities are the largest of Meyer’s four vineyard-specific Pinot Noir: 650 cases should ensure availability through the summer. The McLean Creek Road vineyard is a complex plot that includes three blocks of Pinot Noir planted to five French clones. Standard practice after several years is to age the wine for 11 months in one-quarter new French oak before bottling the following summer. Anthony Gismondi and Treve Ring both felt 90+ points worthy earlier this month, complimenting “another classic MFV wine” with up to five years further aging possible. Winery Direct $40

Corcelettes 2015 Merlot: I had a chance to taste an early sample of this finely valued Similkameen Merlot before release late last fall and was immediately hooked, particularly at this price point. It’s the first varietal Merlot from Corcelettes, and comes from rare own-rooted vines in the Keremeos Upper Bench home vineyard. The wine performed quite well recently against some strong and established competition in the BCWAS Blind Tasting, but only 322 cases were produced so it won’t last long; I made sure to get mine over the winter. John Schreiner got an early taste in September as well, and praised the powerful aromas and rich, concentrated texture in a 92-point review. Winery Direct $27

Burrowing Owl 2014 Merlot: This popular South Okanagan stalwart is probably Burrowing Owl’s cornerstone wine, yielding several thousand cases on an annual basis, distributed all across the country. By now, the mature vineyards and established winemaking practices ensure a consistent high quality, although some years stand out even further. The warm 2014 vintage brought the Wyse family a Gold medal at last summer’s National Wine Awards, alongside sterling accolades from the judging team: all four reviews on WineAlign allocate 91+ points. The wine’s long aging potential of up to a decade was emphasized, although it is “drinking very well right now,” after 18 months in barrel (French, American, Hungarian, and Russian). Early approachability is a characteristic that no doubt helped it place in the top three of the BCWAS Blind Tasting. Winery Direct $30

Poplar Grove 2014 CSM: Here’s a creative, alternative blend that differs from the more traditional Bordeaux stylings of the winery’s flagship Legacy red. Wine Club members typically get first crack at it, and I was more than happy to do so recently, although 1,200 cases should ensure sufficient availability in the tasting room for some time. The wine’s name comes from the combination of Cabernet, Syrah, and Malbec/Merlot, this year comprising 37% Cabernet Franc, 27% Cabernet Sauvignon, 16% Syrah, 11% Malbec, and 9% Merlot. Winemaking saw all five varieties fermented (naturally) and barrel aged for 21 months in French oak separately, before blending and another 20 months of bottle age. I’ve thoroughly enjoyed past vintages – in large part due to the Syrah component – and ensure CSM finds its way home with me every year. Winery Direct $35

Stag’s Hollow 2015 Renaissance Meritage: Stag’s Hollow usually formulates minor blends for their varietal reds (e.g., 95% Merlot, 5% Cabernet Sauvignon), but hasn’t produced a designated reserve Meritage in many years. As Anthony Gismondi pointed out in his 90-point review, this is the first one since 2005 – and only 100 cases were produced! With sufficient quantity and quality of estate fruit (Cabernets in particular) on hand in 2015, Winemaker Dwight Sick was able to blend 76% Merlot, 13% Cabernet Sauvignon, and 11% Cabernet Franc from the winery’s home vineyard in Okanagan Falls. After fermentation in one third new French oak the wine spent an additional 18 months on the lees before being bottled unfined and unfiltered. The winery encourages further aging in bottle, and John Schreiner is in agreement: his 93-point review recommends cellaring until 2025. Winery Direct $50