For the past several years the BC Wine Appreciation Society has hosted an annual double-blind varietal tasting, beginning with Syrah in 2013, and in latter years featuring Cabernet Franc, Pinot Noir, and Riesling. Having recently taken over as Society Cellarmaster I was given the task of organizing this year’s tasting, and settled on long-suffering Merlot. After taking a beating following the release of the film Sideways in 2004, unfairly maligned Merlot deserves to be championed more often, particularly given its standing as BC’s most-planted red grape. I looked forward to the challenge of showing off some top local examples. 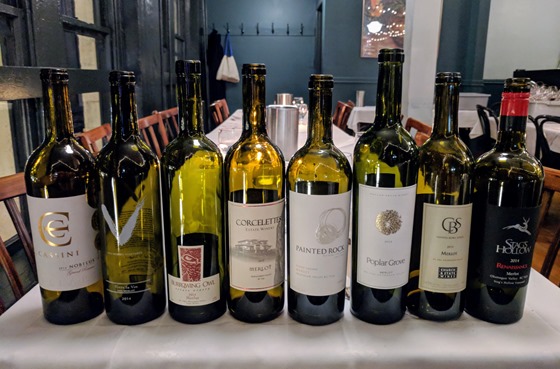 I was limited to only eight wines given the physical constraints of our venue, fewer than years past, so it was important to ensure variety and avoid overlap. I focused on regional distribution alongside important criteria such as quality and availability. Using what was on hand in the Society cellar allowed for a selection of vintages from 2012-2015, while geographic range from Naramata through Osoyoos and on to Keremeos yielded sufficient diversity. While I longed for some of the exclusive icons from LaStella or Checkmate, price was another consideration, and so the wines remained within the $27-$40 range. Cost doesn’t always predict quality however, so prominent award-winners were in the mix to see how they stacked up. The wines were all poured blind, and served blind in the following randomized order:

Painted Rock 2012: The tasting’s oldest wine, coming from professional storage in the BCWAS cellar, it’s long since sold out, as the 2014 is currently available at the winery. The Merlot block on the west-facing Skaha Bench estate vineyard was harvested October 23, and the grapes were later aged for 18 months in 50% new French oak before just over 1,000 cases were bottled.

Stag’s Hollow 2014 Renaissance: The winery’s reserve tier Merlot was harvested from the Okanagan Falls home vineyard on October 27, before aging in 50% new French oak for 15 months. This wine was one of two minor blends in the tasting, having incorporated 10% Cabernet Sauvignon for additional complexity, before bottling of just 225 cases. A Gold Medal at the 2017 All Canadian Wine Championships made it one to watch.

Cassini 2013 “Nobilus”: Bursting with accolades, Cassini’s example of Golden Mile Bench Merlot offered high expectations. The wine had returned a Double Gold (Best of Category) at the 2016 All Canadian Wine Championships, and a prestigious Lieutenant Governor’s Award last summer. Adrian Cassini entrusted his grapes to 100% new French oak for two years after harvest in the last week of October, releasing only 187 cases in the fall of 2017.

Corcelettes 2015: From the young winery’s relatively new home vineyard on the Keremeos Upper Bench, rare own-rooted vinifera vines were harvested early in September during this hot vintage. The grapes spent 16 months in a mix of French and American oak before 322 cases were released quite recently. At only $27 it was also the least expensive wine in the tasting.

Poplar Grove 2014: Just north of the winery location at the south end of the Naramata Bench are the pair of neighbouring vineyards that yielded a thousand cases of this local favourite. The wine is actually a four-grape blend, harvested over a month-long period starting in early October: 88% Merlot, 5% Cabernet Sauvignon, 5% Cabernet Franc, and 2% Malbec. Grapes were aged in used French oak (second- to fourth-fill) for 21 months.

Church & State 2013: Another Black Sage Bench example, but this time from lower in altitude closer to the valley floor. The Coyote Bowl and Rattlesnake Vineyards adjacent to the winery were harvested October 23, before 22 months of aging in one third new French oak. Just 275 cases came about, and it’s long since been supplanted by the present 2015 vintage for sale.

Van Westen 2014 “Vivre la Vie”: Rob Van Westen’s family vineyards can be found at the northern end of the Naramata Bench. The three small blocks that formed this wine were harvested from October 4-19, and spent 21 months in 25% new French oak before bottling of a mere 148 cases. The 2017 All Canadian Wine Championships awarded Double Gold to mark this bottle as category leader in the premium Merlot tier.

The fifty-plus participants at the sold-out tasting were all asked to rank order the eight wines on anonymous ballots, which I then tabulated using a Borda-count system (for all the voting-method geeks out there) to yield the overall crowd favourites. The clear champions emerged on top in short order, led by Cassini, Van Westen, and Burrowing Owl. The next level was dominated by Corcelettes, Painted Rock, and Poplar Grove, and demonstrating that vintage certainly was not a reliable predictor of appeal, given the full four-year range in that cluster.

Unfortunately, a couple of the wines seemed to have suffered from either faulty bottles or tainted stemware, as reports of off flavours harmed the chances of both Church & State and Stag’s Hollow, relegating them to the rear. My own servings seemed to have avoided any problematic bottles or glasses, as both Church & State and Stag’s Hollow found favour in my notes. Served second, Stag’s Hollow yielded a toasty, leathery nose with palate of blackberries and a pucker on the finish. Church & State, one of the older wines, offered a dusty nose before an aggressive palate of chewy tannins and tart fruit that finished long. It’s truly a shame some glitches may have prevented these two wines from achieving their potential. 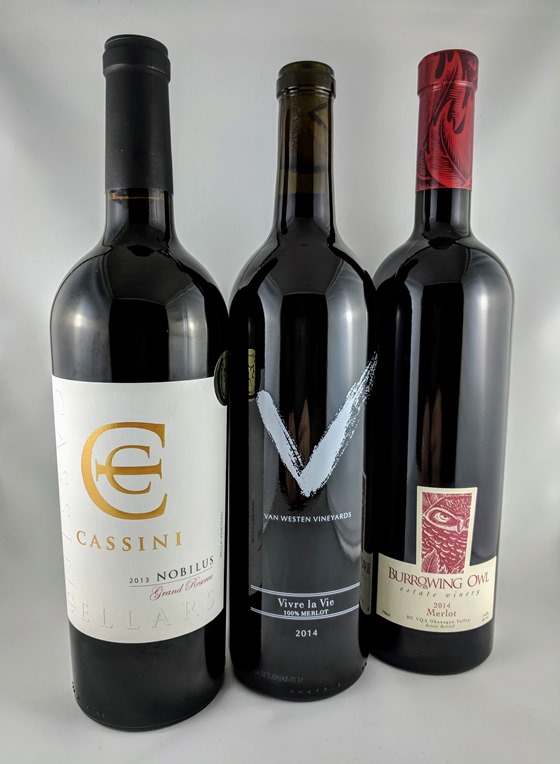 The third wine served, top-ranked Cassini, made a particular impression – my notes reference the rich, creamy texture and profile of baked fruit and vanilla. Van Westen showed the winery’s trademark age-worthy tannins, with smoky hints but a well-balanced acidity that brought juicy fruit to the forefront. Burrowing Owl offered significant caramelization on the nose and palate – easy to like – with an accessible texture and ripe southern Okanagan fruit. Corcelettes revealed the freshness of youth, with a range of berry fruit flavours and hints of menthol, pleasantly elegant given the price point. Painted Rock’s Merlot always takes longest of John Skinner’s reds to come around, and even with the benefit of age it was still tight, showing floral character on the nose in time, while ripe, dark berries emerged on the palate. Poplar Grove belied its relative youth, presenting a surprisingly smooth palate of quintessential blueberry, along with deceptive spices that had me guessing Similkameen.

The entire experience was enlightening in the way that blind tastings so often are, and guests seemed quite pleased with the wines and information on offer. I myself was grateful my selections went over so well, and look forward to assembling future tastings of new varieties (or even blends). Thank you to the members of the BC Wine Appreciation Society for so diligently tasting and rating these wines – I hope you had as much fun as I did!