Our wine club was a little delayed this month due to scheduling conflicts, but the six of us finally managed to get together on Saturday to share some new and unique food and drink. Although we normally enjoy three courses with wine accompaniments, both of our guest couples coincidentally brought different frizzante wines from 8th Generation in addition to their pairings! Our exciting aperitif was the 2009 Frizzante Chardonnay, last year’s much-celebrated new sparkler in the gorgeous bottle with a fun crown cap. Although the 2009 is sold-out, the 2010 version is coming in May, and I hope it is just as delicious: a refreshing, tropical take on Chardonnay that livens up any situation! The Chardonnay was so successful that for 2010 a Pinot Noir-based frizzante has been released, called “Confidence” (the 2010 Chardonnay has been renamed “Integrity”). Our other guests happened to have picked up a bottle of Confidence that day, and we opened it after dinner. Although the colour of pink cotton candy, and with a stated 20 grams of residual sugar, I don’t recall it being overly sweet (my tasting notes towards the end of the night get mysteriously less detailed). I think the wine would have benefited from being served with food, so I look forward to trying it again in warmer weather, perhaps alongside a fresh salad outside on the balcony. 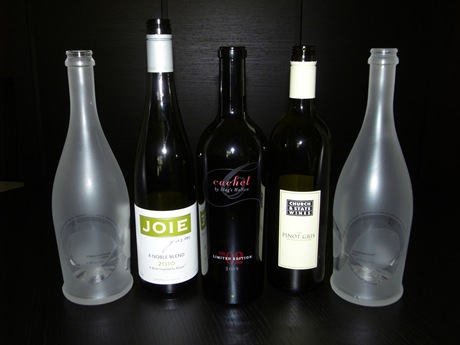 Our first course consisted of a very exciting “unincorporated” squash soup served inside acorn squash bowls! The gourd had been cleaned and seeded and the cheesy soup base was cooked inside each squash; you got to basically make your own soup as you scraped the pulp into the creamy broth! The excited appetizer team had brought two wines to accompany their soup, which were initially served blind in paper bags, with the knowledge that one of them was – gasp – not from BC! This German interloper revealed itself relatively early based on the deep golden colour and powerful diesel aromas: it was a Mosel Riesling, from Vereinigte Hospitien. The second wine was dramatically different, much lighter in colour and more nuanced in flavour; although we knew it was from BC some guesses included Riesling or perhaps even Ehrenfelser. The reveal showed we had been enjoying none other than Joie’s famous Noble Blend, from the newly released 2010 vintage. Those feminine characteristics that Icon Scores mentions were noticeable and enjoyable, and I was quite pleased to have had a chance to try the new release. Although both wines paired nicely with the soup due to their natural sugars my favourite was the Noble Blend due to those more delicate aromas and flavours. 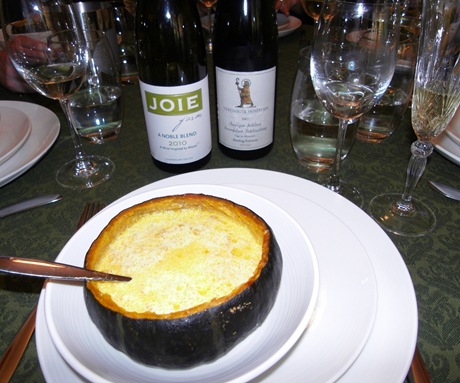 For the main course I had spent the afternoon preparing a complicated vegetable torta to measure up to a very special wine: Stag’s Hollow Cachet No. 2 (2009). This rare and unique wine was released earlier this year to critical acclaim, and has been quickly snapped up by discerning restaurants and collectors – which didn’t take long given that only 450 BOTTLES were produced! Stag’s Hollow has recently embarked on an ambitious new strategy involving small lot wines released under the Cachet label, and No. 2 is a Grenache-Syrah blend that has probably never been seen before in BC. I was lucky enough to get bottle number 401/450, and had picked the brain of talented winemaker Dwight Sick over what to pair with his marvellous wine: Dwight suggested a recipe from Whitewater Cooks – “Torta Rustico with Tomato-Chipotle Sauce and Lemon-Basil Aioli”. The dish involves multiple layers of roasted vegetables and tortillas baked inside a spring-form pan with goat cheese, pesto, and mozzarella, served on a spicy tomato sauce and “drizzled” with aioli. We modified the recipe slightly to remove the peppers, and added a golden beet to end up with six layers: beet, zucchini, potato, red onion, yam, and eggplant. The aioli didn’t drizzle quite the way I had hoped for, but it still tasted great, and prompted me to invest in an inexpensive squeeze bottle to improve future presentations. 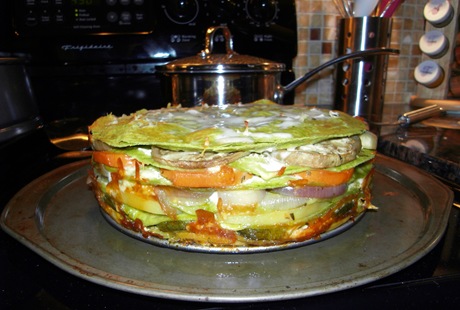 As for the wine, it was everything I remembered from my initial tasting in January at Taste BC: an intensely fruit-forward, sublimely textured marvel that paired perfectly with the torta and smoky chipotle sauce. The nose showed very pleasing aromas of caramel, and the raspberries on the palate were particularly noticeable. Although I only bought one bottle – for budgetary reasons – I am sorely tempted to acquire another for a little bit of cellar-time, from one of the few private stores that carry it. 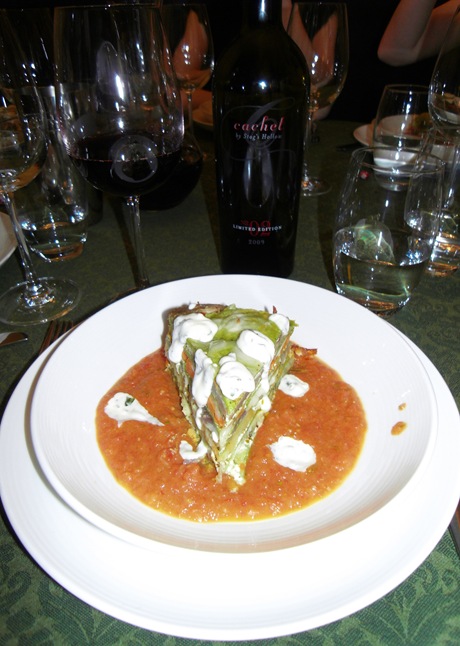 After selected second-helpings of torta, and some longing glances at the empty Cachet bottle, we moved on to a beautiful dessert course: “Red Berry Tart with Lemon Cream Filling”. The tart was made on-site with fresh strawberries and raspberries, and although somewhat improvised on the spot after the cookbook was left behind, I don’t think it could have been improved upon one bit! The fresh berries and cream cheese were paired with Church & State Pinot Gris (2009), which possessed a crisp, clean finish to help balance the creaminess of the tart. This particular Pinot Gris comes from Church & State’s Vancouver Island vineyards, and is described by John Schreiner as “one of the best Island Pinot Gris wines, with mouth-filling flavours of pear and citrus.” We noticed vanilla flavours and good natural acidity to help clear the palate at the end of the meal. 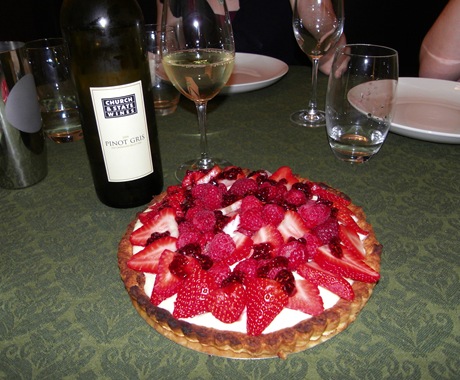 Next month I get to create a Spring dessert, and I’m already eyeing some fortified wines that might pair well with chocolate ice cream!