At the same time as the Playhouse International Wine Festival taking place this week in Vancouver, BCWAS held a tasting of Road 13 wines on Wednesday. Normally tastings take place earlier in the month but the organizers couldn’t pass up the chance to achieve synchronicity with one of the biggest and best wine events in the world! Road 13 does not have a presence at the Playhouse Festival this year (many wineries attend in alternate years), which likely allowed for winery owners Mick and Pam Luckhurst to attend our tasting alongside new winemaker J-M Bouchard and General Manager Donna Faigaux: it was a packed head table! J-M only joined Road 13 this year, having replaced long-time winemaker Michael Bartier, who departed on good terms to pursue his own winery dreams.

Road 13 very graciously donated the wine for the event after carefully scouring the cellars for back vintages deemed worthwhile. A couple last minute changes to the tasting line-up even took place when certain wines didn’t make the cut. We still thoroughly enjoyed eleven excellent and interesting wines from the 2005 through 2010 vintages. 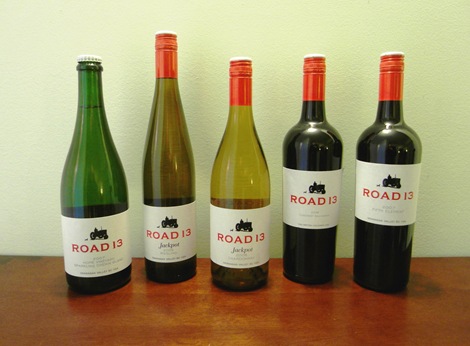 As attendees sat down to another packed house – the second sold-out event in a row – we were greeted by four white wines and seven reds. I think I speak for everyone when I say we were all very pleasantly surprised to see the (sold-out) 2007 Sparkling Chenin Blanc before us; one of the last minutes substitutions. Only the second vintage of Sparkling Chenin at Road 13, this masterpiece won a gold medal at the 2010 Okanagan Fall Wine Festival BC Wine Awards. Bottled under a fun and practical crown cap, this wine is a must-have every year: it’s extremely unique for one, and it tastes great, with fine mousse and honeyed pineapple flavours.

The other three whites we tasted included the 2010 Honest John’s White, an entry-level aromatic white blend of mostly Riesling that will be released later this summer. The 2009 is still widely available, and is just as refreshing; it makes for a good patio wine you can keep in your fridge ready for any occasion. (All of Road 13’s wines are sealed with screw-caps, which makes storage and refrigeration stress free: no need to lay them down, or worry about corks drying out.) Two of the reserve tier “Jackpot” wines rounded out the whites: Jackpot Riesling 2009, and Jackpot Chardonnay 2008. With only 181 cases made it’s hard to believe the outstanding Jackpot Riesling is still available! The Jackpot Chardonnay is well balanced and tart; it’s not made in the creamy buttery style of some other Chardonnays (not that there’s anything wrong with that). The Chardonnay received a gold medal at the 2010 Canadian Wine Awards, but does not appear to be for sale any longer via the winery (likely due in part to that gold).

A few cellar selections from Road 13’s red wine portfolio were next, along with hors d’oeuvres courtesy of Listel Hotel/O’Doul’s Restaurant Executive Chef Chris Whittaker. Because Road 13 donated the wine BCWAS was able to engage Chris to fashion some tasty treats for the attendees. My big thanks to the BCWAS Executive for their thoughtfulness and to Chris for seemingly effortlessly whipping up a delicious fully vegetarian selection for the small number of us present. The rest of the crowd enjoyed the original menu of Short Rib Sliders, Venison Carpaccio, Mushroom Tartlet, and Cured Salmon. 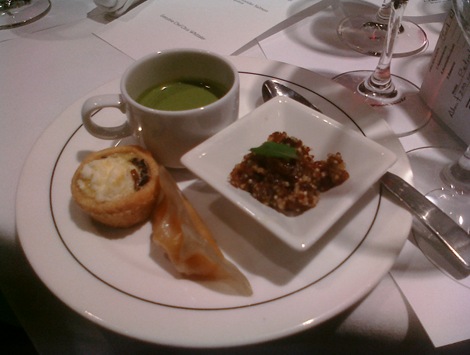 Included in the red selection was the 2005 Black Arts Pinot Noir. (When Road 13 was known as Golden Mile Vineyards “Black Arts” was the reserve tier.) J-M assessed this still-tasty Pinot as nearing the end of its life, and a number of attendees were impressed it was still quite approachable after nearly six years. Also from the 2005 vintage was the Fifth Element, Road 13’s big red blend. The name  plays off of wine being the supposed fifth element after earth, water, wind, and fire. Avoiding use of the Meritage name also means Road 13 is free to experiment with the blend each year, and some years it has included Syrah (not permitted under Meritage Alliance rules). The 2005 has aged very well and is showing nicely integrated tannins and pleasing savoury notes.

We also enjoyed three single varietal wines from the cellar, none of which are produced any longer, due to Road 13’s transition to blends. The 2006 Cabernet Sauvignon received the highest score in its category at the 2009 Canadian Wine Awards, and no doubt many fans were sad to see it go following the 2007 vintage, but if you have some it could still enjoy years in the cellar. The 2007 Merlot and 2007 Syrah were both tasting nicely as well: the Merlot is full-bodied with good acidity and fine tannins, it could last for a while longer no doubt. The Syrah was one of my favourites, and that of many others present: it smelled wonderfully fresh and fruity, with meaty, peppery flavours on the palate. Most of Road 13’s Syrah now goes into the excellent Rockpile blend, the second release of which (from 2009) is coming out this Summer. We even got a chance to try some in advance: it was definitely young and fresh, with tartness and tannins aplenty. It will likely have settled down a bit by June, but there is no rush to open it immediately: I’m aging some 2008 to see how it develops over time.

Finally, the most recent Fifth Element – from 2007 – was also tasted. It’s still young but aging well, with nice freshness and finish. The 2006 Fifth Element just won a gold medal at the 2010 Canadian Wine Awards, so I look forward to seeing how the this vintage fares in competition over the next year, as I’m led to believe 2007 was an even better year for reds.

At the end of the night we were given the rare chance to order some of the back vintages, pre-releases and sold-out wines we had tasted. Road 13 even offered complimentary shipping on case lots, so I hope more than a few attendees took advantage of this opportunity! I myself am looking forward to a 2005 Fifth Element to add to my vertical collection, plus a few Sparkling Chenin Blanc to enjoy while I excitedly await the next edition!