One of the best aspects of the Playhouse Wine Festival – for thrifty collectors at least – is the on-site store open during the International Festival Tastings. The temporary BC Liquor Store that opens in the conference centre sells almost all the wines being poured at the sample tables, and many of them are not normally carried in public stores – some aren’t even released yet! You can find winery-priced bottles that are usually limited to restaurants and private stores, or bottles that are rarely sold outside the wineries themselves! The Festival store represents a chance to pick up those elusive bottles you’ve missed out on, or ones you know will sell out quickly in wider release.

My strategy for the past couple of years has been to visit the store immediately upon entry to the Tasting Room, with a list in hand for the bottles I know I want without even needing to taste them. (Besides, on the off chance I dislike a wine immensely after tasting I can always return it no questions asked; it’s never happened.) Fortunately the Wine Festival publishes their official program online in advance, so you can find out every wine being poured in the Tasting Room, and thus being sold on-site. Swoop into the (nearly empty) store, snag your must-haves before they sell-out, and relax and enjoy the rest of the evening with the knowledge your wines are safe and sound in the bottle check; they’ll even deliver them to your nearest BC Liquor Store in the next week or so!

This year BC Liquor Stores assured Playhouse organizers that they would hold back one third of the wine allotments for each of the three nights of the Tasting Room, to avoid frustrations of years past when certain wines sold out on the first night. I can’t vouch for whether they actually followed that plan, as at least one of the wines I was looking for – Sandhill Small Lots Viognier (2010) – was sold out at the beginning of the second night, but almost everything else seemed to be well stocked. In no time at all I had put together a mixed case of well-researched BC wines I trusted would not disappoint, based on past experience, trusted reviews, and national awards. My stress level dramatically reduced I could peruse the Tasting Room at my leisure without wondering about the rapidly dwindling stock in the store! 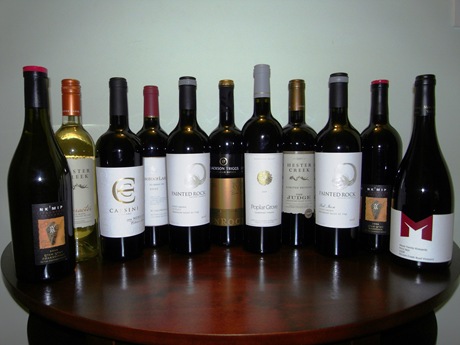 From left to right, my Festival acquisitions as detailed below:

Nk’Mip Qwam Qwmt Chardonnay (2009): Nk’Mip’s reserve Chardonnay has impressive pedigree, as past vintages have received high praise from Anthony Gismondi and John Schreiner. Last year’s 2008 release received a Gold Medal at the All Canadian Wine Championships, plus a Bronze Medal at the Canadian Wine Awards. The 2009 release is not yet detailed on Nk’Mip’s website, but should be available for sale quite soon.

Hester Creek Character White (2010): The Character wines (White & Red) from Hester Creek represent key pieces of this veteran winery’s refreshed branding. These well-crafted blends are still a little hard to find outside private stores, so this represented a valuable opportunity to get a bottle at winery pricing. This blend includes some of Hester Creek’s ultra-rare Trebbiano, which is also sold as a single varietal.

Cassini Cellars Nobilus Merlot (2008): This rare wine (290 cases made) was named Best of Category at the 2010 All Canadian Wine Championships, and I have been looking for it ever since to no avail. Tasting this wine encouraged John Schreiner to declare Cassini “one of the Okanagan’s best producers of serious Merlot” and it has garnered extensive praise beyond that from Icon Wines and Wine Diva Daenna Van Mulligen, with the always conservative Anthony Gismondi of course bringing up the rear.

Osoyoos Larose Le Grand Vin (2007): BC’s famous French Connection released their latest masterpiece last Fall, and it seemed apt to add another bottle to my collection, seeing as I had room in the case I was filling up. Even Gismondi can’t say enough good things about this cellar-worthy beauty: “…sets a new level on the bar for all the wannabe icons.” Now if only Vincor would spend a few bucks on web design to get Osoyoos Larose’s website up-to-date with new releases!

Painted Rock Merlot (2008): Painted Rock launched out of the starting gate last year with a strong portfolio of varietals and a boldly-named blend – Red Icon. Two Lt. Governor’s Awards later proprietor John Skinner has trouble fending off rabid customers, but throughout it all he retains his charming humility! The first release of Painted Rock Merlot was deemed Best of Category at the 2010 Spring Okanagan Wine Festival, and it went on to win Silver at the Canadian Wine Awards, and Gold at the BC Wine Awards in the Fall. Like the 2007 vintage, the new release is “intense and age-worthy”, and joins its older sibling in my cellar.

Jackson-Triggs Gold Series (Sunrock) Shiraz (2008): A recent rebranding has seen this wine included in the new “Gold Series” as the “Sunrock Vineyard” labels have been retired, but it retains its impressive pedigree: the past two vintages have been awarded Gold Medals at the Canadian Wine Awards, with the beautiful 2006 named Red Wine of the Year. Anthony Gismondi declares that it “continues to impress me every year”. As long as Jackson-Triggs’ Osoyoos Lake Bench vineyard sites continue to produce exceptional fruit I see no reason not to keep buying this every year!

Poplar Grove Cabernet Franc (2007): A brand new release not even listed on the winery website yet, this wine was thoroughly enjoyed in the tasting room by my party. I had planned on purchasing anyway given the excellent 2006 vintage; the 2007 is equally “subtle and excellent”.

Hester Creek The Judge (2007): I heard about this new icon red from John Schreiner in advance of the Festival; in his blog he describes it as a big, complex wine with many years ahead of it. I also love the play on words in the name – Hester Creek being found on the Golden Mile Bench. The Judge is the pinnacle of Hester Creek’s new rebranding, and it is garnering positive reviews already; I look forward to seeing how it develops in future vintages.

Painted Rock Red Icon (2008): Perhaps the most unique aspect of this wine is the fact that it contains no Cabernet Sauvignon, almost unheard of for a big red blend. John Skinner defends the omission by stating that it simply contributed little to the overall composition once the Merlot, Malbec, Cabernet Franc, and Petit Verdot had been blended – the wine was already that good! Knowing that John received a Lt. Governor’s Award for the first release last year, and hearing that 2008 was a smaller vintage I nabbed two bottles of this one, especially given the glowing review provided by John Schreiner during an early barrel tasting.

Nk’Mip Qwam Qwmt Meritage (2008): At this point I pick up some of Nk’Mip’s reasonably priced ($30) Meritage every year – this will be my third vintage. It always performs well in national competitions such as the All Canadian Wine Championships and the Canadian Wine Awards; the 2008 just received Silver at the CWAs last Fall. I have to start making room for the new Mer’r’iym icon red from Nk’Mip, but I like their strategy of retaining a solid Meritage blend in addition to the higher-priced barrel-select Mer’r’iym.

Meyer Vineyards McLean Creek Road Pinot Noir (2008): One of three single vineyard Pinot Noirs from boutique Okanagan Falls producer Meyer, this particular varietal no longer appears on the Meyer website – likely due to sold-out status (only 145 cases were produced, part of its appeal for me). Meyer describes it as an “elegant and feminine” Pinot Noir that will age well, with fine-grained tannins and excellent length. This wine has been widely reviewed, with positive accolades from Anthony Gismondi, John Schreiner, Daenna Van Mulligen, and Liam Carrier of Icon Wines.

With another Playhouse Festival complete and my cellar nicely stocked I may need to spend the next month actually drinking some wine: I’m planning a multi-varietal blind tasting in early May, and a White Blend Summer Celebration in June. Upcoming events I’m looking forward to include a very exciting BC Wine Appreciation Society Painted Rock Dinner at Raincity Grill. Lastly, new 2010 Rosés are starting to show up on store shelves so now is the time to try them out and find some favourites before the smaller producers sell out; I’ve already got my order for 8th Generation Pinot Meunier Rosé locked in!