Southern Okanagan sister wineries LaStella & Le Vieux Pin released some exclusive premium red wines from the 2009 vintage this month. Earlier this week I got the chance to taste these wines – plus a preview of next Spring’s whites – and reflect on the exacting practices of these two wineries. It would come as no surprise that the tasting was accompanied by more news of dominance in the field by both wineries.

At the wineries’ head office in Vancouver, General Manager Rasoul Salehi had prepared a comparative tasting of Viognier-based whites to provide perspective on the Le Vieux Pin 2011 “Ava” blend to be released next spring. The last few bottles of the delicious 2010 Ava – a blend of Viogner, Roussanne, and Marsanne – were recently sold out, so fans will have a long wait until next spring if they haven’t stocked up. For comparison several local and international wines were present, including varietal Viogniers from Black Hills and Laughing Stock, plus blends from Terravista and Moon Curser. Terravista’s 2011 “Figaro” is a Viognier-Roussanne blend, while Moon Curser’s 2010 “Afraid of the Dark” contained nearly equal proportions of Viognier and Roussanne, with one fifth Marsanne as well. Ava is a similar blend of all three grape varieties, although the proportion of Viognier will decrease for 2011, with both Roussanne and Marsanne taking on a larger role compared to 2010 (during which they contributed 2% and 8% respectively). I’ve enjoyed the 2010 Ava immensely this year, but upon tasting 2011 I was even more impressed: the very bright fruit on display will usher in the spring marvellously in 2013. 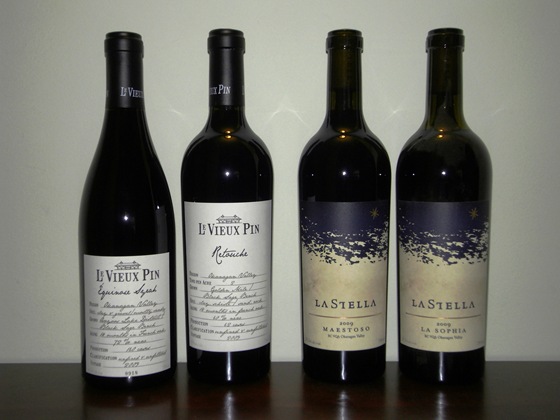 When it came time to have a closer look at the red wines on display there was particular excitement about an entirely new wine from Le Vieux Pin. The 2009 “Retouche” is a Cabernet-Syrah blend with a deceptively simple 70/30 ratio. Rasoul explained that it took over 70 blending trials to achieve the perfect oak balance and proper proportion of each variety so that the Syrah “sits invisibly behind the Cabernet, filling in the gaps.” I loved the bright acidity and fruit focus, and even detected just a hint of rubber on the nose to keep things interesting. Seeing as the “Hermitaging” practice of blending Rhone reds into Bordeaux was pioneered in France it should come as no surprise that reviewers are finding the Retouche to show a number of Old World characteristics. In general the consensus seems to be that a couple more years in the cellar would be of benefit for this still “tightly wound” wine.

From LaStella come two new varietal wines showing the best of the best from this Osoyoos winery. The flagship wine at LaStella is the Maestoso Merlot, a consistently “massive wine” that Rasoul has remarked in the past continues to vex the winery, as it keep aging almost unchanged! The new 2009 vintage (the fourth release so far) is unsurprisingly very ripe, with lots of dark fruit, and hints of olive that I frequently enjoy in LaStella’s Merlot. It is warm and comforting, and the ripe tannins and lively acidity suggest a very long life, yet remain sufficiently delicate to sample with pleasure in the present. The wine clocks in at 15.2% alcohol; an additional factor contributing to yet another nearly invincible Maestoso. Even given the generous 2009 vintage only 6 barrels (148 cases) were produced, which should come as no surprise when the grapes are cropped to 1 ton per acre.

So far we’ve been lucky to see Maestoso from every year since production began in 2006, but LaStella also produces a varietal Cabernet Sauvignon – on a less frequent basis – called “La Sophia”. The hot 2009 season provided for particularly good conditions to ripen Cabernet, but even so only 48 cases of La Sophia were eventually put together. Reviewing the wine for Wine Access magazine earlier this year David Lawrason declared this beauty to be “one of the greatest Cabernets ever made in Canada.” Having enjoyed the almost Porty flavours of this gorgeous wine I can definitely see where he was coming from. The eucalyptus nose leads into a deep and dark palate that Liam Carrier described perfectly as “complex and captivating…” Naturally the rarity of this wine will demand that one must act fast to obtain some, with priority going to members of LaStella’s Wine Society, “Piccolo” Wine Club, and mailing list.

Not available at the most recent tasting, but recently released nonetheless is Le Vieux Pin’s 2009 Equinoxe (Reserve) Syrah. I tasted both the 2009 and 2008 vintages at a tasting last month, and was quite pleased with the elegant 2009 vintage in particular, noting the enjoyable perfumed contribution of the few percentage points of Viognier co-ferment. The 160 cases produced are going out the door very quickly now that the wine placed first in the recent “Judgement of Montreal” Syrah tasting. The Equinoxe Syrah bested a number of international benchmarks in a blind tasting that Le Vieux Pin didn’t even know they’d entered! (Rasoul explained that because the winery doesn’t enter competitions their Quebec distributor entered the wine independently.) Although the winery’s “regular” Syrah is exceptional in its own right, I couldn’t resist picking up one bottle of the Equinoxe version to see how it fares in a couple of years!