The team at celebrated Oliver boutique winery Le Vieux Pin has spent the past few years developing an ultra-small lot tier of special reserve wines called the “Equinoxe” series. Le Vieux Pin is just now starting to harvest only their eighth vintage, so the Equinoxe wines are still very much a work in progress, but it all started in 2006 from a “meagre half ton” of Cabernet Franc. The winery’s Golden Mile “La Feuille D’Or” vineyard had yielded a small parcel of exceptional Cabernet Franc grapes that were harvested, handled, and fermented uniquely; the winery speaks of hand inspecting and de-stemming each individual berry! Since that initial harvest other vineyards have yielded similarly spectacular parcels in various years, including Merlot, Syrah, and Chardonnay, with the “largest” release so far being the 2008 Equinoxe Merlot – coming from eight treasured barrels (compare that to only 200 litres of 2006 Cabernet Franc).

This week a group of lucky media and friends of the winery were invited to the first “Master Class” seminar detailing the Equinoxe wines, and given a chance to taste five sublime samples. Le Vieux Pin General Manager Rasoul Salehi and Winemaker Severine Pinte were on hand to tell us about the wines and the incredible precision mandated at the winery. One remarkable detail that came about is the fact that some Equinoxe wines have not seen, or may not see the light of day: if deemed unworthy of the name after bottling – despite all the work that went into them – they are not released to the public! As Rasoul puts it, “It helps to have a thirsty proprietor” to bite the bullet and drink these 95% perfect wines.

Having had the opportunity to explore the wines of Le Vieux Pin (and sister winery LaStella) as well as get to know the passionate people behind them over the past couple of years I have grown to respect and cherish them immensely. The overall approach at the winery is to assume that all the grapes/wines will be Equinoxe quality, and to handle them all as such until certain lots reveal themselves as uniquely special. Wine not quite up to snuff for the reserve level is directed to the excellent “Varietal” series, and any remaining wine ends up in the highly quaffable series of “Petit Rouge” and “Petit Blanc” table wine blends. The end result is that even when one is consuming a great value $20 bottle the grapes may still have been individually hand inspected, but due to some twist of fate in the barrel room, didn’t make the cut for Equinoxe. 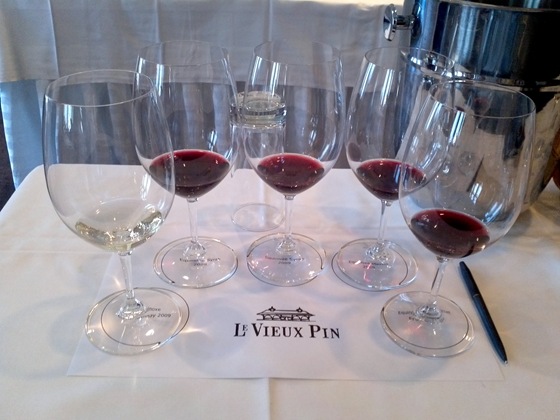 The wines we tasted included four different varietals, starting with the 2009 Equinoxe Chardonnay, predecessor to the upcoming 2010 release. Only 72 cases (approximately three barrels) of Chardonnay from a Golden Mile contract grower were deemed appropriate for the Equinoxe label that year. One particularly eye-opening fact shared by Rasoul is that Le Vieux Pin pays contract growers by the acre, not by the ton, which reduces the incentive to increase yield beyond the ideal. Combined with similarly exacting practices in the estate vineyards the result can be harvests with a yield under one ton per acre – a stunningly small amount. This particular Chardonnay came from near ancient (in BC) 39-year-old vines that yielded 2.4 tons per acre. The result, after 6 months in 100% new French oak barrels is a rich, smoothly textured wine with elegant oak integration and a very long finish. The winery suggests food pairings that eschew complexity that would mask the wine’s many layers, the example provided being a simple pan fried trout or halibut with a side of vegetables.

After the Chardonnay we had the chance to compare and contrast the first two vintages of Equinoxe Syrah, from 2008 and 2009. Having recently replaced their Pinot Noir vines Le Vieux Pin is beginning to zero in on Syrah as a prime focus for their efforts to express the Southern Okanagan terroir. In 2008 only three barrels from surprisingly young vines (3 years old) in the Golden Mile yielded the first Equinoxe Syrah. Naturally it is a very dark and rich wine, which Severine feels has more minerality than the 2009 – she described a characteristic that reminds one of licking granite. The intense 2009 growing season provided for another Equinoxe opportunity, which paid off with 160 cases from two vineyards that included Black Sage Bench fruit this time around. Both vintages have had a few percentage points of Viognier added to fermentation to lift the aromatics, and the upcoming, younger 2009 release seems to possess a bit more of that perfumed contribution. Both wines are rich in dark fruits, liquorice, and pepper. Interestingly, Rasoul and others feel that grapes (Syrah in particular) grown on the eastern bank Black Sage Bench acquire black pepper characteristics, while those from the western bank Golden Mile Bench show more white/pink pepper flavours.

The 2008 Equinoxe Merlot came next, and although it is the current release, fans will be hard-pressed to find some of the 175 cases produced and already sold out. The 2009 Equinoxe Merlot – of which only 50 cases were produced – will not be released until next Spring, three and a half years after harvest! A specific block of vines in the rocky Feuille D’Or vineyard consistently yield Equinoxe-calibre Merlot in a style that the winery considers “intense with firm tannins.” After 21 months in 60% new French oak, and then over two years in bottle I would tend to agree that this wine still possesses plenty of long-lasting tannins. On the nose it smells very clean and fresh – youthful almost – which develops in the glass to produce what I found to be a mouth-watering savoury aroma like soup stock. For pairing the winery recommends equally rich, complex foods such as grilled rib eye over blue cheese polenta, or lamb tagine with raisin and mint couscous – I can definitely see the mint working quite well.

The final wine of the tasting was the successor to that first special Cabernet Franc, and like the 2006, it was the only Equinoxe wine from the 2007 vintage. Once again the Feuille D’Or vineyard delivered marvellously, but with only one row of vines of the appropriate calibre a similarly meagre one barrel came out of a harvest of only 0.7 tons/acre! The lucky strike was repeated in 2008 with another barrel, but for 2009 the final results are still uncertain after bottling – it could be a vintage exclusive to the proprietor’s cellar should it not develop as desired. The 2007 wine has become what Rasoul describes as “Porty” with a richness that last year led John Schreiner to award a 95-point score to this “tour de force”. It is the Equinoxe Cabernet Franc that tends to best represent the philosophy behind Le Vieux Pin’s approach to wine: marrying the fruit intensity of the new world with the structure of the old world. Their obvious success is a boon to wine fans everywhere – especially now that they have international distribution that includes some of Europe’s top restaurants and wine shops.

My thanks to Rasoul and Severine for hosting such an informative and illuminating seminar, and to the proprietors and staff of Le Vieux Pin for raising the bar and keeping it high year after year – cheers to your continued success!