In the harsh light of Saturday morning the BCWAS Bus Tour participants discovered a bit of a surprise waiting for us in the parking lot: our anticipated bus had been replaced by a full size model much larger than expected! The shorter-wheelbase vehicle we had “ordered” was unavailable at the last minute, so the substitution caused a bit of hand-wringing by the Society’s Executive – worried about whether such an ungainly vehicle could make it up the steep hills and around the sharp turns ahead of us. Fortunately our talented driver would prove more than capable in the days ahead – surprising many with his skilful handling of the dauntingly large bus. 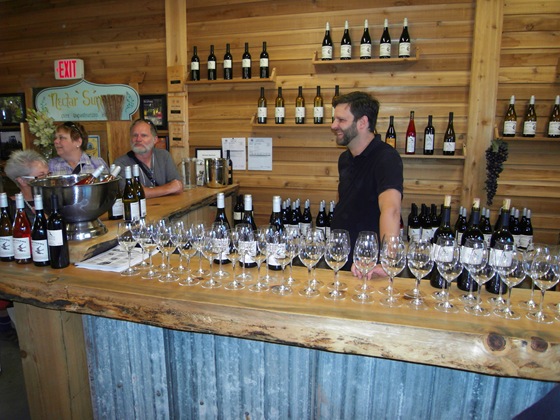 With everyone aboard and spread out amongst the much larger space we headed out to our first stop of the tour at Covert Farms beside McIntyre Bluff north of Oliver. Our bus and driver were soon put to the test inching up the long incline to the winery and farm building. Fortunately we soon filled the tasting room with 35 fans of breakfast wine. Our Covert family hosts masterfully poured us samples from a well-prepared tasting bar while we learned about the 600 acres of 65 types of organic produce grown on site, including 25 acres of vineyards. We sampled some extremely tasty fresh tomatoes, peppers, strawberries, and grapes as we sipped Pinot Blanc, Rosé, and adventurous reds such as the smoky “MDC” Cabernet-Zinfandel-Syrah blend, and “The Bluff” Cabernet-Petit Verdot. With the winery still getting off the ground – having been founded only seven years ago (as “Dunhan & Froese”) – we were told that going forward would see a focus on lower cropped vines, and a more serious barrel program. 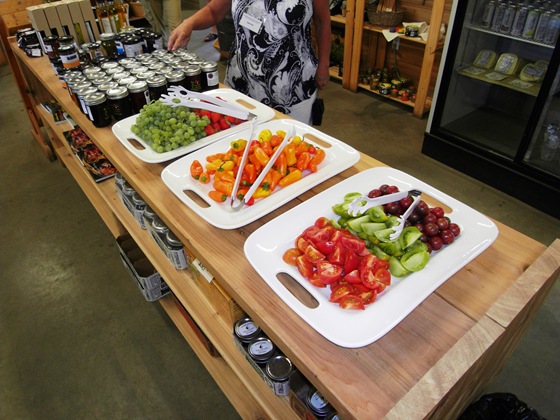 With quite a few cases of wine already started and without further delay we zipped back onto the road and headed south to the Black Sage Bench and our lunch date at Burrowing Owl. Despite arriving a little bit late we still enjoyed a walkabout tasting on the terrace overlooking the winery’s pool and extensive vineyards beyond it. Our lunch in the Sonora Room restaurant elicited compliments on the expertly prepared food, including immaculate Seafood Crepe Terrine and Cherry-smoked Slow-roasted Pork Loin. Back vintages of 2009 Chardonnay and 2008 Merlot provided ideal accompaniments to the delicious food. I myself received a customized vegetarian menu of Roasted & Grilled Vegetable Terrine with red quinoa salad, followed by Three Grain & Summer Vegetable Succotash. The Chardonnay was great with the Terrine, and instead of Merlot I was poured a glass of smooth and juicy 2009 Pinot Noir alongside my Succotash. 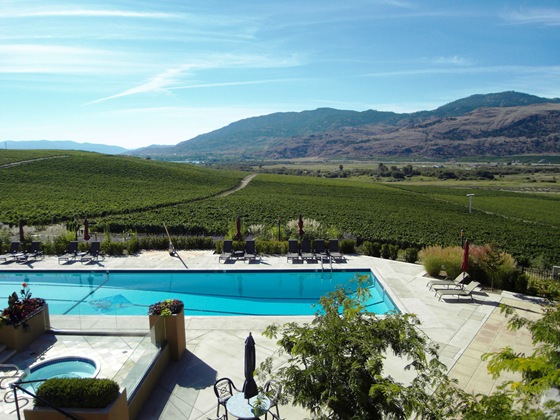 After lunch it was back on the bus and over to the other side of the valley to visit Bill Eggert’s Fairview Cellars. Bill’s little log cabin tasting room wouldn’t even come close to holding us so we relaxed in the shade outside while we sampled 2011 Sauvignon Blanc, and a series of his consistently masterful reds. Comparing the 2010 and 2006 Madcap Red blends was particularly exciting considering the complexity and richness evident in the older bottling – which Bill suggested had another 3-4 years ahead of it too! A new 2010 vintage of Bill’s most well-known wine “The Bear” Meritage had been labelled only days before, and more than a few bottles thus ended up in members’ boxes and bags. Samples of 2010 Cabernet Sauvignon and 2011 Cabernet Franc directly from the tank helped to further cement Bill’s reputation as a master of red wine. He doesn’t seem to be slowing down either, as he pointed out plans for significantly enlarging his underground barrel room! 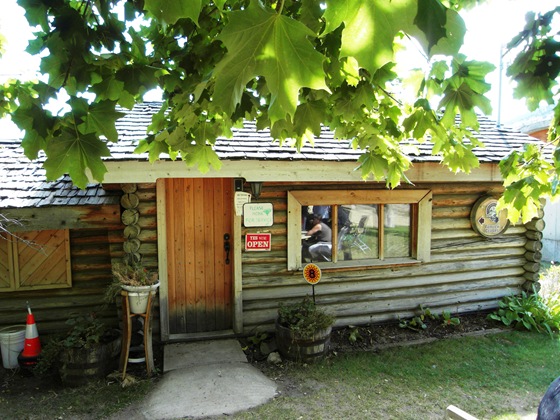 Having sufficiently exhausted Bill’s cash register and loaded up the bus with yet more wine we travelled south to Rustico Cellars for our final winery visit of the day. After a brisk walk up the long driveway to the winery we marvelled at the sod-roofed 1800’s-era log bunkhouse on site. Eclectic owner Bruce Fuller entertained us all with uninterrupted bar-top pouring into three dozen tumblers as we rotated through the snug tasting room. We tried out Gewurztraminer, Cabernet Franc Rose from the Similkameen Valley, “Last Chance” Zinfandel, and a hearty Cab-Merlot amusingly named “Threesome”. What was particularly fascinating about this winery was learning that they own 400 acres of vineyards – some over 50 years old – and sell grapes to 27 other wineries in the region! 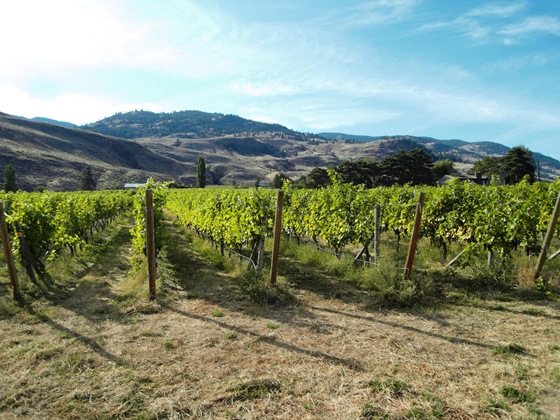 The short trip back to Walnut Beach Resort gave us time for a rest period before our scheduled dinner with Similkameen winery Clos du Soleil at the Watermark Beach Resort in downtown Osoyoos. Many members took advantage of the refreshing outdoor pool and soothing hot tubs while enjoying the beach view across the lake. A cool beer after a surprisingly tiring day of chauffeured travel really hit the spot! Soon it was back on the bus for the trip around the corner and across the causeway to the Watermark.

At the Watermark we were escorted through the wine bar to the courtyard patio. Having the whole patio to ourselves, with the outdoor kitchen in full view, was quite a treat. We were even luckier to hear from Clos du Soleil’s Marketing & Sales Director Andria Lee and Vineyard Manager Jean-Felix Boulais about the stellar line-up of wines to be had with our meal. Andria and Felix explained the biodynamic and organic focus of the winery, which uses no pesticides and instead focuses on all-natural solutions like vineyard chickens. Celebrated industry veteran Ann Sperling has been the consulting winemaker since 2008, and helps to encourage sustainable practices in all areas. 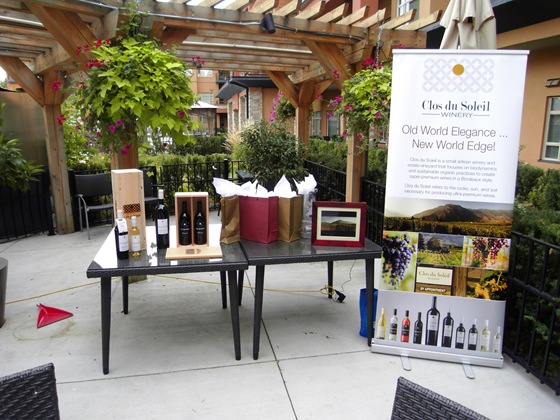 As the sun set over the western hills guests dove into a plate of roasted duck breast, fingerling potatoes, and blue cheese gratin, with the (sold out) 2010 “Celestiale” entry-level red blend in our glasses. Finally, with content grins on our faces we savoured lavender hazelnut praline ice parfait and peach & blueberry compote served with 2011 “Saturn” late harvest Sauvignon Blanc. Throughout the meal each course included a vegetarian option which I relished, but it was obvious the other dinners also enjoyed their meals immensely. We were sure to applaud the talented Chef and attentive Watermark staff as Andria drew names for a generous selection of Clos du Soleil gift packs. A few valuable bottles of wines went home with grateful guests at the end of the night!