Having made the decision to stay in Osoyoos Sunday night after the conclusion of the Bus Tour, I was able to take my time Monday making my way back to Vancouver. I took the more northerly Coquihalla route on the way to the Okanagan, so it made sense to take the southern route through the Similkameen Valley on the trip home, thus ensuring I could visit as many of my favourite wineries as possible along the way. First I had some unfinished business in the Okanagan though, as there were more than a few wineries to which we simply couldn’t make it during our bus tour. In the back of my generously sized rental SUV I already had eight cases of wine – three of my own and five from other BCWAS members who were grateful for some borrowed trunk space; fortunately there was room for a little bit more! 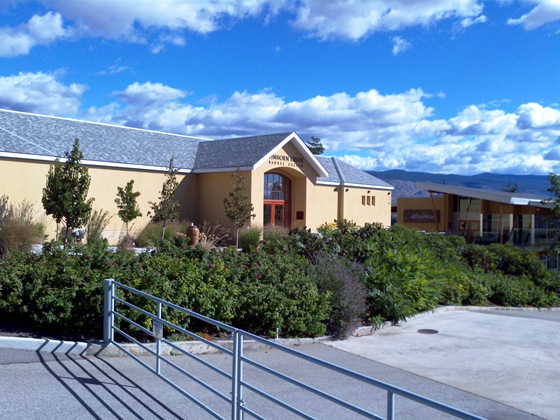 My first stop of the day was at Tinhorn Creek, where I had confirmed in advance I could pick up my Fall Crush Club allotment of newly released red wines, including the 2009 Oldfield Series reserve wines – Merlot, Syrah, and 2Bench Red (Meritage). It being my big chance to take advantage of my Crush Club (15%) discount, and avoid shipping charges, I made sure to pick up a few additional bottles – gifts for friends, and some more Merlot and Cabernet Franc of course! Outside the winery I visited the Barrel Room to take in the wonderful aromas, and was even lucky enough to spot Winemaker Sandra Oldfield supervising the very first bin of 2012 grapes being loaded into the hopper at the crush pad!

With another case of wine in the trunk I spent the next couple of hours searching for a few more wines on my To-Buy list. I dropped by Road 13 to investigate the recently advertised small lot reds, such as Syrah-Malbec, Syrah-Mourvedre, and some vineyard-specific Pinot Noirs. Unfortunately the wines had not yet received their final VQA approval, and so couldn’t be sold yet, but I made sure to place an order for delivery in the coming weeks. I then returned to Fairview Cellars to pick up Bill’s “Bucket o’ Blood” Cab-Syrah, it having just been labelled – and now ready for sale – the day before (one day after our Bus Tour visit). I also swung over to the Black Sage Bench to check out Black Hills’ shiny new “Wine Experience Centre” and snag a bottle of 2010 Syrah (only the second vintage of this varietal for Black Hills). Being my own designated driver I wasn’t able to sit down for a Tasting Experience in the beautiful venue, but it’s nice to leave something for next time. Finally, just down the road, I stopped at Church & State to see if any new releases were available exclusive to the wine shop (always a possibility in September), but I was saddened to have no luck. I was, however, pleased to meet what I can only assume was the winery’s guard Mantis, an entertaining and fascinating insect which generously posed for photographs. 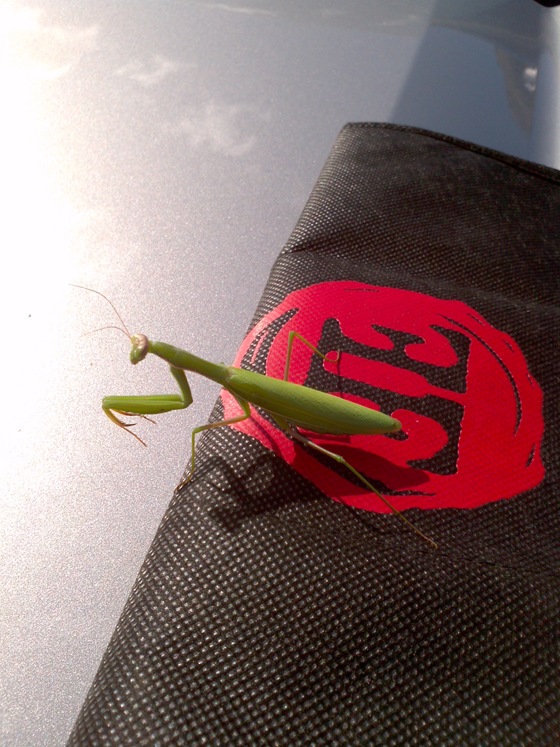 By mid-day I had worked up quite an appetite and was looking forward to enjoying lunch at Hester Creek’s excellent Terrafina Restaurant. After tasting a number of new releases in the spacious tasting room, I joined the winery’s Communications Manager Sarah Lefebvre for some wine country chat and spectacular pizza. Neither of us could say no to the fire-crisped dough and fresh local ingredients, including tomatoes grown right beside the building! Back in the wine shop I was once again stymied by timing, as the winery’s Reserve Cabernet Franc and big red blend “The Judge” were only days away from release, but Sarah reassured me I would be able to get some one way or the other. The winery does have a comprehensive online store, and sees wide distribution in Vancouver, so my small but growing vertical of The Judge will eventually be joined by the 2009 vintage.

Finally making my way out of the Okanagan Valley I had a number of stops ahead of me in the Similkameen on the way to Vancouver. The first winery encountered after leaving Osoyoos on the Crowsnest Highway is Forbidden Fruit, so far south as to be nearly at the Canada-US border. Having missed visiting this renowned organic farm and fruit winery in the past due to time constraints, I was committed to finally stopping by this time around. Bouncing down the dirt road along the Similkameen River I soon arrived at the charming tasting room and immediately picked out some fresh organic peaches and apples available for sale. I also made sure to leave with a bottle of Pomme Desiree Iced Apple Wine: the 2009 vintage was named top fruit wine at the 2010 Canadian Wine Awards, and the newest vintage (2010) was the only non-Quebec wine to even medal! I look forward to returning to Forbidden Fruit in the future to enjoy the picnic area overlooking the River, and perhaps tour the orchards with owners Steve Venables & Kim Brind'Amour.

Travelling a short distance up the highway I made sure to stop at Seven Stones, where I got the chance to catch up with owner George Hanson, and get bottles of newly released 2010 Cabernet Franc and Row 128 Merlot. I always make sure to find room in my cellar for George’s supremely well-crafted wines, his rich reds in particular. I was a bit too early for the upcoming 2010 “The Legend” Meritage, but George tantalized me with talk of Christmas Gift Packs that might include opportunity for this very small lot wine (100 cases produced).

Continuing on my way I made a short stop at Eau Vivre, where I was excited to get one of the last remaining bottles of Lt. Governor’s Award-winning 2009 Pinot Noir, along with a 100% Similkameen Malbec from the 2010 vintage. After I left and complimented the tasty, albeit quick experience over Twitter, owner Dale Wright was actually apologetic for not “recognizing” me during my visit! I certainly didn’t expect any special treatment, and was just glad enough he managed to find some of that special Pinot Noir while I was there. Yet another winery to spend more time experiencing in the future!

As I eased my way west I paused to say hello to Orofino Vineyards’ proprietors John and Virginia Weber, while we watched a new barrel delivery in progress. I left with another bottle of delicious 2010 “Scout Vineyard” Syrah upon re-tasting it, plus a couple bottles of bright 2011 Gamay to enjoy in the waning days of summer. I was pleased to keep my record of Orofino being my most visited winery (since 2005) intact!

Before getting serious about actually returning to Vancouver – considering the afternoon was rapidly coming to a close – I made sure to visit Herder Winery and pick up a few bottles of brand new 2010 Pinot Noir for myself and some friends. We’d all enjoyed the 2009 quite a bit following our June visit, and Proprietor and Winemaker Lawrence Herder was quick to report that he likes the new 2010 even more! Wishing I could stay and chat longer with the wonderful Herders I confirmed directions and hours of the nearby Robin Ridge Winery before setting out for my final winery visit. Just before the end of the business day I zoomed through Robin Ridge to add one more bottle to my collection: the 2009 Reserve Merlot won Double Gold (Best of Category) at the 2012 All Canadian Wine Championships, after being named Best of Varietal at the Okanagan Spring Wine Festival. 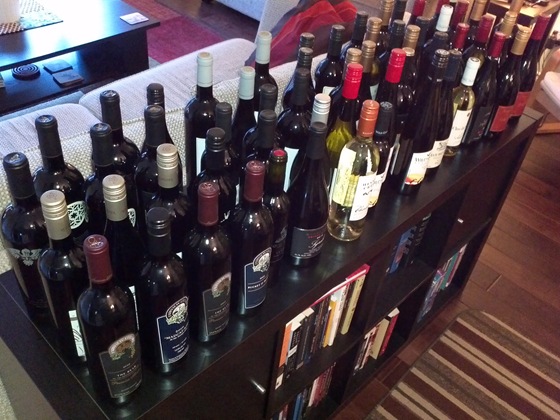 Arriving home in the late evening I was glad to be back in familiar surroundings after quite a whirlwind weekend. My wife was certainly pleased I’d made it home in one piece, and I had a fun time suggesting to her that all ten cases of wine in the trunk were ours. I’m not sure she was relieved when I revealed “only” about 60 bottles were ultimately staying with us, but even she couldn’t deny they were quite a sight to behold lined up together – a delicious future for a couple years down the road. I would soon be faced with the decision of where to put all this wine, considering I seem to be collecting it faster than I can drink it, but that’s a story for another day!