Last weekend the BC Wine Appreciation Society held our annual bus tour, this year focusing on the southern Okanagan valley. Having only joined the Society early last year, this was my first opportunity to join the bus tour fun (I missed out last year due to scheduling conflicts). This year I was determined to join the festivities and take advantage of a near perfect occasion to visit wine country: after the summer rush, but just before the Fall Wine Festival. My hopes were that I’d be able to pick up many of the new fall releases in person, before, during, and after the bus tour.

I set out from Vancouver in a rented Ford Explorer SUV, to ensure plenty of trunk space (which would prove particularly useful later on). I have no connection with Ford, but must mention that throughout the trip I was extremely impressed with the vehicle – from the synchronization with my Android phone, to the intelligent cruise control that ensures a safe following distance. I was very sad to see it go when the trip was over! After a relatively relaxing drive up the Coquihalla Highway and Okanagan Connector I emerged in Peachland and headed straight to Mission Hill. Ironically I had yet to visit this legendary property and winery, so I wasn’t going to let the opportunity pass me by yet again. Not to mention, Mission Hill has a highly respected restaurant, which seemed like an ideal place to stop for lunch. 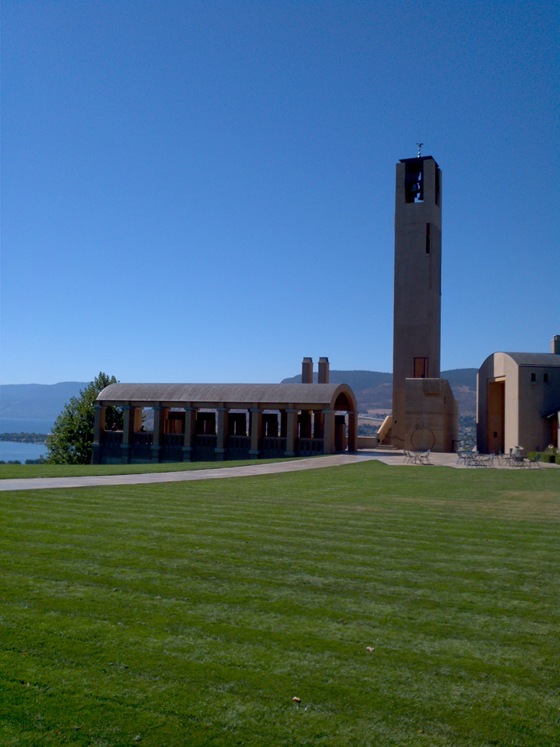 Upon arriving I spent some time admiring the spectacular architecture and immaculate grounds, including some of the best views in the valley. I continued to admire the view of Okanagan Lake and the eastern shoreline while enjoying a delicious lunch at the open air Terrace Restaurant. The precise service, flavourful and impeccably prepared food, and the stunning vistas certainly explain why the Terrace has been named one of the top five winery restaurants in the world!

After lunch I swung through the expansive wine shop and took the opportunity to stock my cellar with some of the new releases on which I was focused. I began with a bottle of the consistently well crafted Oculus (2009), to add to my vertical collection, and soon added with pleasure a bottle of 2010 Martin’s Lane Pinot Noir. The limited edition single vineyard Martin’s Lane wines (Riesling and Pinot Noir at present) are named in honour of Proprietor Anthony von Mandl’s father, and are not widely distributed outside the winery. The first vintage of Pinot Noir in this new tier has proven impressive, and should go even further when it blossoms in bottle, according to Anthony Gismondi. To round out a half-dozen bottles, I added two each of the newly released 2009 Quatrain and 2009 Compendium, Mission Hill’s “Legacy Series” red blends. I’ve been collecting each since their first vintages (2005 and 2006 respectively), and they consistently receive glowing accolades and awards, such as Gismondi’s recent 90+ point reviews for each. After years of careful cellaring and a few pleasing samples along the way, I look forward to really delving into those first vintages this year! 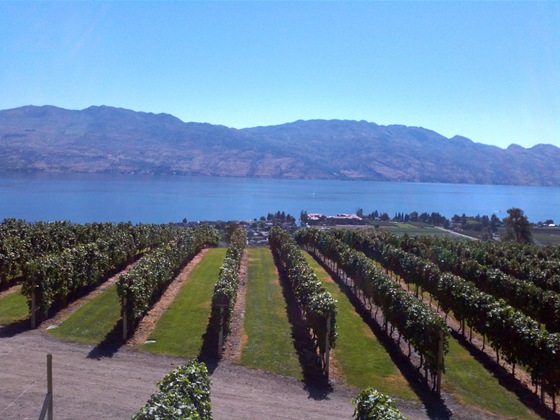 With the afternoon rapidly progressing I couldn’t dawdle any longer, plus I felt like I should leave a few mysteries to explore at Mission Hill for my next visit. The rest of the afternoon would be devoted to quick stops at a select few wineries on the way south to my eventual destination in Osoyoos, where the bus tour was set to start Saturday morning. I swung past Quails’ Gate up the road from Mission Hill on my way out of town to grab a bottle of winery-exclusive Tawny, and then headed straight to Penticton and the Naramata Bench.

My first stop at the southern end of the Bench was Poplar Grove, where I was extremely pleased to find three newly released 2009 reds: the Lt. Governor’s Award-winning Cabernet Franc was accompanied by Syrah and Merlot, and all three soon went into the case in my trunk. I was particularly lucky to acquire the Merlot, as it had just been released that very day, and would in fact end up pulled back into the cellar after my departure when it was deemed to require more time before full release!

Up the road I arrived at Red Rooster in time to quickly peruse the tasting room and pick out the newly released wines I was after – the 2010 reserve Malbec, Meritage, and Syrah. Last year’s BC Wine Awards named the 2009 Red Rooster Syrah as Best Red Wine, which rapidly diminished the supply and prevented me from acquiring even a single bottle. At least I got to taste it during this spring’s Playhouse International Wine Festival, and it was superb. As a result, I wasn’t going to miss the 2010 vintage, given the record of excellence winemaker Karen Gillis is developing. Only 458 cases of Syrah were produced, and barely half as many of the Malbec were just put on the market. I’m always intrigued by BC Malbec so I tend to pick up a bottle whenever I see one, which is infrequently and often from very small lots. Quite a bit more Meritage was put together (1,550 cases), but at $25 it should sell quite briskly, so a bottle for the cellar was certainly in order. Considering Karen’s 2010 Cabernet Merlot ($19) was just named #1 Canadian Wine at the Wine Access International Value Wine Awards, I’m sure the Meritage has great potential.

Leaving Red Rooster I was faced with a painful choice: I could pop next door to Ruby Blues and hope to find a bottle of the winery exclusive 2011 Viognier, recently honoured with a Lt. Governor’s Award, or I could hope to make it down to Blasted Church before closing – but not both! As I was hoping to add a third vintage to my vertical of Blasted Church Nothing Sacred Meritage I had to forgo an opportunity for some undoubtedly delicious Viognier. Calling ahead to Blasted Church, I managed to persuade the gracious tasting room staff to stay open for a few minutes past closing while I raced down along the shore of Skaha Lake. Seeing as I missed out on the now sold-out Holy Moly Petit Verdot when I neglected to buy a bottle during my visit in June, I was quite pleased to check off the Meritage from my To-Buy List!

With virtually every tasting room now closed for the day I set off for the Walnut Beach Resort in Osoyoos where I would be spending the next three nights along with the rest of the BCWAS Bus Tour participants. We were warned that the bus would leave promptly from the front entrance at 8:30 a.m. Saturday and Sunday mornings, so one definitely needed to stay on site! On my way past the Golden Mile wineries I noticed that Cassini Cellars was still open, and so took advantage of a golden opportunity to obtain a bottle of 2009 Cabernet Franc – only 85 cases made! This first varietal Cabernet Franc from Cassini has received very positive press, and was first runner up in its category at the Okanagan Spring Wine Festival (second to Sumac Ridge’s 2009 Black Sage Vineyard offering). This “swoon-inducing” rarity was not yet released when I stopped by in June, so I was excited to get a second chance for a bottle before it sells out.

At the Resort I met up with a number of additional members in the penthouse suite booked by our Society President, where we shared wines from our personal cellars over a hearty pasta dinner. My final bottle of CedarCreek 2006 Platinum Merlot went over very well, and as the evening went on I relished hearing entertaining tales from previous bus tours. Anticipating our early morning start many of us retired to our rooms in short order, keen to ensure enough energy for the fun-filled days ahead. I contentedly took stock of my new cellar additions back in my room, and prepared myself for the adventures to come.