SpierHead Winery in south-east Kelowna has been carefully and methodically entering the market since last summer, with a focused portfolio of reds and whites specially tailored to the local terroir. Chardonnay and a particularly good Riesling cover the white domain, while the winery’s first vintage of (great value) Pinot Noir – from estate grapes – reportedly won a prestigious gold medal at the 2012 Canadian Wine Awards. The winery also scored a major coup at the Okanagan Wine Festival this fall when it was named best new winery at the BC Wine Awards (following in the footsteps of respected peers Painted Rock, Cassini Cellars, and then Volcanic Hills last year).

Although the winery opened with a series of varietal red wines, they are currently focused on just two red blends: the flagship blend “Vanguard” has been with the winery since day one, while the the newer entry-level “Pursuit” is the second level wine. Compared to some flagship reds however, both wines are reasonably priced, with even the Vanguard coming in at only $30. I recently received a sample of each of the new 2010 vintages of these reds, and shared them with a few friends to get a wider opinion. 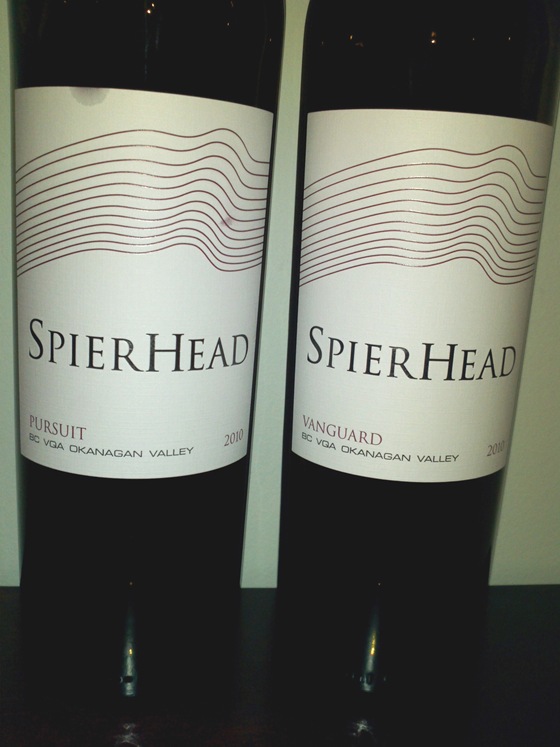 Pursuit ($22) is the more immediately approachable wine, comprised of a majority of Merlot, along with 28% Cabernet Sauvignon and 16% Cabernet Franc. Smartly, the winery has opted to source Black Sage Road fruit from the southern Okanagan for their big reds, realizing the Kelowna terroir is much better suited to lighter Pinot Noir and white varieties. The wine was barrel aged for 18 months in 44% new French oak, and only 375 cases were produced for this first release.

The 2010 growing season was late starting, and cooler than average, especially compared to the blazing 2009 heat, so one doesn’t expect to find big ripe reds, but SpierHead has worked well with what nature provided. The Pursuit showed some green aromas as well as fiery notes, but on the palate we tasted plenty of juicy berries thanks to bright acidity: blueberries and red currants were suggested, and hints of licorice emerged when paired with food. By the next day more chocolate notes were apparent when we sampled what remained in the bottle after sealing it overnight. I would be remiss if I didn’t publish the poetic ode to Pursuit composed on the spot – by a published writer with a doctorate in English Literature no less:

The Vanguard retains the tart acidity of the Pursuit and adds even more tannins thanks to nearly equal proportions of Cabernet Sauvignon and Merlot along with 4% Cabernet Franc. Although the residual sugar remains nearly identical to that of the Pursuit (2.8 g/L), it tastes drier, with darker fruit flavours and a profile that reminded some of raspberry balsamic vinaigrette. Hints of molasses, cinnamon, and anise were mentioned as well, although in general it is the more savoury of the two reds. The wine also saw 18 months in French oak, of which a larger percentage (55%) was new oak.

Both of these wines are still quite young and definitely demand food pairings at present to tame their acidity and tannins, but those features also bode well for the long haul. The wines should do well in the cellar for a while as they mature, giving time for the Vanguard in particular to more fairly compete with other 2010 flagship blends, of which few have yet to be released (many competitors are still in the midst of their 2008 and 2009 releases). Combined, the two reds yield only 640 cases, showing that SpierHead is once again proceeding intelligently and patiently as their vineyards, technique, and brand mature. Having yet to visit many of the Kelowna-area wineries I look forward to seeing what consultant Tom Di Bello called “the most meticulous vineyard I had ever seen” in person in the near future, plus enjoying what I’m sure will be even more well-crafted wines.