Ever since our group lost one of the three founding couples in July – when they moved Kentucky to soak themselves in Bourbon – we haven’t met for our monthly wine club. Coincidentally, everyone who remained in Vancouver seemed to have taken on increasingly busy work and home lives in the meantime. As a result, the four of us haven’t had a chance to formally get together and decide on the club’s future. In all honesty there was probably a little bit of denial involved: if we don’t replace them then they aren’t really gone. Fortunately for us, our long-lost friends and their newly walking one-year-old came up here to visit last week, and we leapt at the chance for a club reunion dinner! This being a very special occasion – with multiple birthdays and other belated celebrations for which to account – it clearly demanded that we pull out all the stops and crack open some extra special bottles of BC wine. 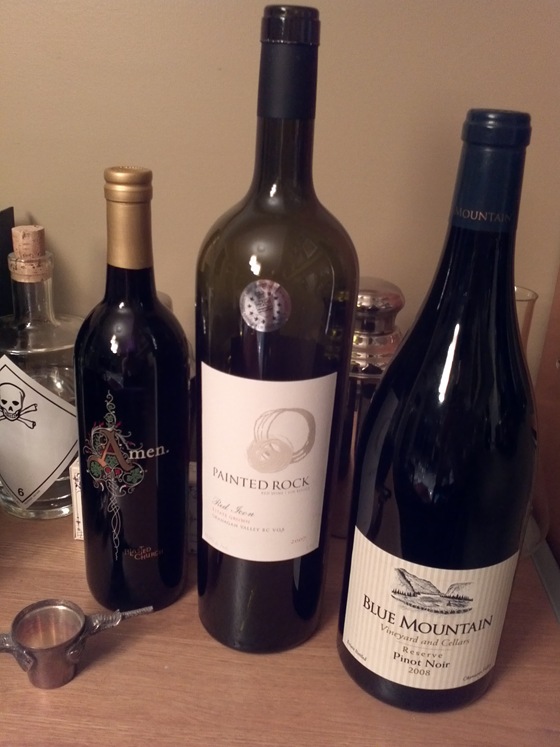 Last Christmas the six of us jointly purchased a magnum of Painted Rock 2007 Red Icon (the first vintage of this marvellous wine), with the goal being to hold it until a worthy occasion in the coming future. Having somehow managed to avoid breaching the cork this summer, a reunion seemed like the ideal occasion to finally share our investment. The decision was thus made to embark on a magnum dinner! Having upped the ante bottle-wise it seemed only reasonable to  add some additional people to the mix as well, and we invited another couple to join us and bring a mystery fourth course and wine pairing. 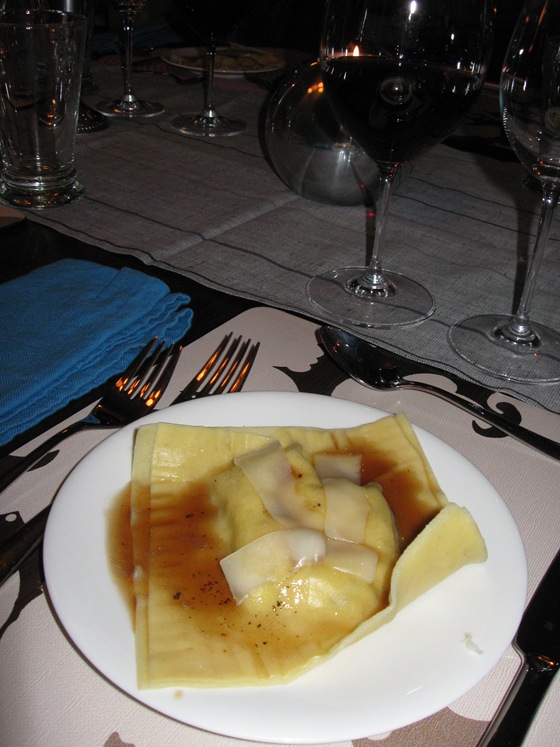 Our Kentuckian chefs jumped at the chance to whip up the always popular appetizer course, where creativity gets the chance to shine particularly brightly. Before moving away, they’d left behind in my care a magnum of legendary Blue Mountain 2008 Reserve Pinot Noir purchased during our visit to the winery in June – the perfect bottle for our newly themed dinner. The wine inspired very impressive giant mushroom ravioli with sage brown butter sauce and shaved gruyere. Already excited to dig in we soon discovered hiding inside each ravioli a charming quail egg surprise; the rich liquid yolk served to further amplify the delicious flavours of ricotta and mixed wild mushrooms. The wine proved a superb pairing, with aromas of cranberries and mushrooms, and bright berry flavours carried by a surprisingly smooth texture given the relative youthfulness of the bottle.

With eight thirsty diners at the table it didn’t take long to empty the hefty magnum. While our hosts worked on getting the entrée course in the oven, they provided a highly welcome intermission bottle of Laughing Stock 2007 Blind Trust Red. The Naramata winery produces a different version of this red blend every year, and keeps the precise components hidden under the capsule for consumers to reveal when desired. The Blind Trust is generally intended for earlier consumption than the winery’s larger icon blend “Portfolio” so it came as no surprise that the five-year-old wine had taken on some savoury characteristics over time. Although it was likely more fruit forward a couple of years ago, we enjoyed the smokiness and hints of soy sauce, while one guest surmised a generous proportion of Cabernet Franc was included based on some green pepper flavours. Spoiler Alert: the blend was ultimately revealed as containing approximately 50% Merlot and a split of Cabernets, both Sauvignon and Franc, for the remainder. 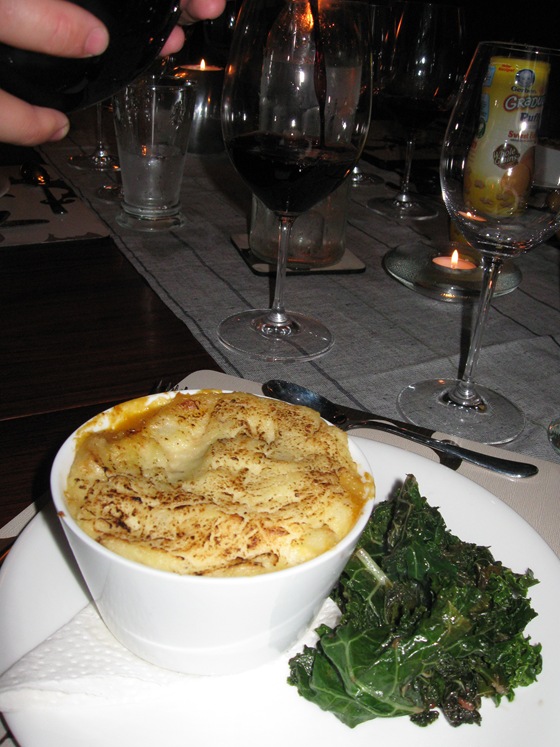 After having let it breathe happily in the decanter for a while, the time finally came to enjoy the Painted Rock Red Icon with our beautiful entrées of individual Lentil Shepherd’s Pie. We were told this particular recipe came from John Bishop’s cookbook “Fresh”, but the braised kale alongside it was all original, with a touch of brandy and delicious raspberry-Merlot black pepper jam. With the shepherd’s pies steaming fresh from the oven, we spent some time sipping at the Red Icon and waxing poetic about this Lieutenant Governor’s Award-winning wine (2007 and 2009 in fact). Interestingly enough, the 2007 Red Icon is led by 33% Cabernet Franc in the blend, followed next by 20% Petit Verdot, and then on to 16% Cabernet Sauvignon & Merlot, and finally 15% Malbec. Proprietor John Skinner and his winemaking consultants have been fully willing to dramatically change the blend every year since 2007, even to the point of adding or removing entire varietals such as Cabernet Sauvignon or Syrah – all in the name of producing the best wine possible.

The non-traditional gamble for the blend in 2007 was clearly successful. After more than three years in bottle following 18 months in French oak, this first vintage of Red Icon was sublimely tasty, delightfully silky, and certainly seemed at its peak. However, it could likely continue to age and improve as time goes by; luckily I have another 750ml bottle to try next year with which to investigate further. The savoury, smoky aromas with hints of tea and olives led into deep, dark flavours of blackberries, cassis, and licorice – we thanked our lucky stars we had a full size magnum to share, otherwise things could have gotten ugly. Still it had to come to an end eventually, and we finished our glasses with wistful expressions while mopping up creamy potatoes and earthy lentils amid compliments to the Chef. 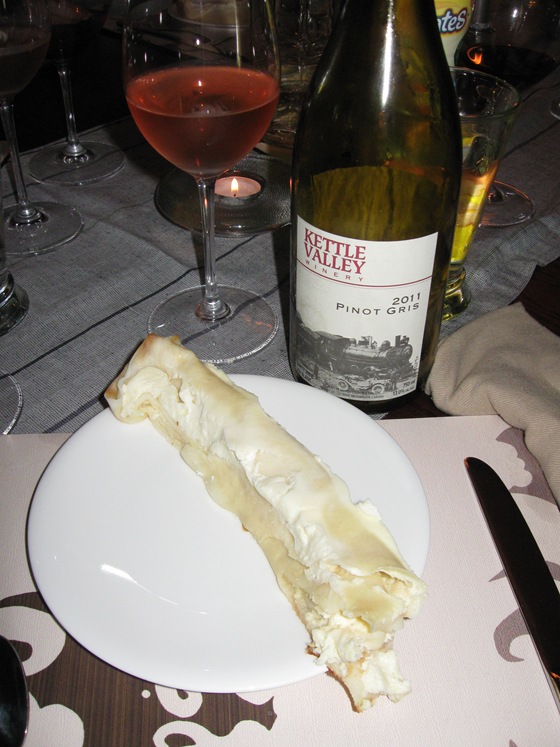 The mystery course from our charming guests came next, in the form of a pre-dessert (or perhaps just a first dessert) of freshly made rolled crêpes. Two bottles of Kettle Valley 2011 Pinot Gris served as a magnum of sorts, which suited us just fine. Like a very small handful of other Okanagan wineries (e.g., Nichol Vineyard), Kettle Valley clearly leaves their Pinot Gris to soak on the skins for longer than usual, hence the stunning pink colour. The delicate cotton candy flavours and steely minerals in the wine proved to be a superb foil for the creamy crêpes, stuffed with mascarpone, sour cream, lemon zest, and vanilla sugar. The wine finished with a clean grapefruit flavour, leaving us refreshed and ready for our second dessert! 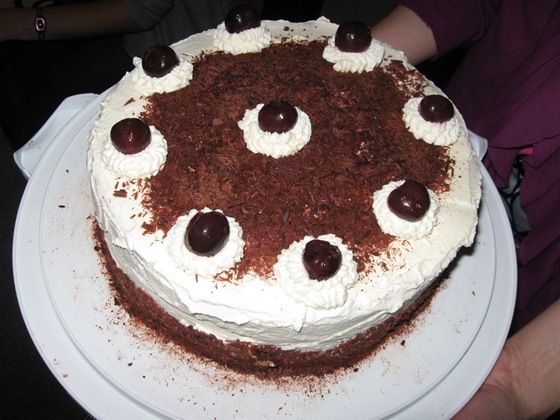 I was certainly looking forward to finally revealing my efforts – courtesy of an inspired idea from my wife – at producing an entirely homemade, traditional Black Forest Cake. It seemed like an ideal pairing for our cherished bottle of Blasted Church Amen Port-de-Merlot, purchased way back in 2009 during a winery visit. Since most dessert wines come in 375mL bottles, we reasoned that a 750mL bottles like ours should count as a magnum, and hence continue the theme. The particular Amen we were about to consume came from the 2006 and 2007 vintages, but newer releases do incorporate more vintages using a Solera style. Going forward the wine is anticipated to possess additional complexity and richness as the average age increases.

As the recipe details, the cake was carefully assembled from three layers of chocolate génoise and a full litre of whipping cream, plus canned sour cherries (not Maraschino cherries). It was a true labour of love that consumed my afternoon. Tasting it and hearing everyone’s enjoyment – and relief that it wasn’t sickly sweet – made it all worthwhile though. Alongside the relatively subtle cake the Amen was a good match, as it was surprisingly dry and restrained, not the “Porty” flavour profile we were expecting given the name and image. The wine’s flavour profile, dominated by cocoa, tied the whole course together, and left us enjoying a wonderful and less cloying conclusion to the meal than may have been feared by some given the title of the dessert! 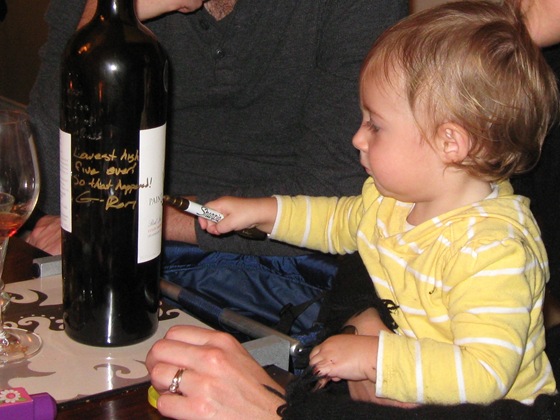 By the end of the meal we were all contentedly stuffed, and revelling in memories of so many good times gone by. We all signed the Red Icon bottle for perpetuity, and vowed this would not be our last adventure together. It’s possible that next time we’ll be dining in Kentucky, so I may need to find out how large a bottle is allowed through customs!