Despite the fact that many weeks have passed since the Okanagan Fall Wine Festival and the traditional release dates of most wines, December always brings a handful of surprise new releases. Some wineries capitalize on the holiday shopping season to show off special gift packs, with either last chance opportunities for sold out wines, or special previews of upcoming new releases: in the case of Blasted Church, they did both! This winery always puts together excellent gift packs over the holidays, and this year they prepared the “Answered Prayers” four-pack of Petit Verdot and Meritage. The well-packed box recently arrived at my door thanks to a generous free-shipping promotion from the winery.

The Blasted Church “Holy Moly” varietal Petit Verdot is an exceedingly rare wine, with only 50 cases having been made in the 2009 vintage, preceded by only 57 cases of the inaugural 2008 vintage. The 2008 wine was praised by John Schreiner as possessing a 92-point “spectacular perfumed aroma” and “a dense, satisfying texture and a long finish.” The hot 2009 season should have facilitated maturity of this late-ripening variety, although the plummeting temperatures that began October ninth that year likely put somewhat of a damper on things. The winery has not specified their precise harvest dates, but they point out the Petit Verdot spent a full 24 months in (mostly) new French oak before bottling.

Despite having visited the winery in early June, I foolishly neglected to buy a bottle of Holy Moly, in the hopes I could kill two birds with one stone and include a bottle in an online order following the August release of the winery’s reserve Meritage. Not surprisingly 50 cases did not last that long, and I thought I had missed the boat. I was very pleasantly surprised when I found out the Answered Prayers pack contained not only the sold-out 2009 Petit Verdot, but a pre-release of the 2010 vintage (of which 100 cases were produced). I’m pleased to now have a three-year vertical of this interesting rarity, and look forward to enjoying the wines after they spend some time in the cellar.

The aforementioned Meritage is known as “Nothing Sacred” by the winery, and was the winery’s first Bordeaux blend starting with the 2007 vintage. Blasted Church’s former winemaker Richard Kanazawa oversaw production of 217 cases of that first five-grape blend, which tough critic Anthony Gismondi complimented for its round texture and “reasonably soft tannins.” Since 2007, the winery has maintained production of approximately 200 cases per year. With the arrival of the Answered Prayers pack I now have a four-year vertical from 2007 to 2010 vintages. Mirroring the Petit Verdot offering, the pack contained the newly-released 2009 vintage and a pre-release bottle of the 2010 vintage, which isn’t likely to see full release until summer 2013! 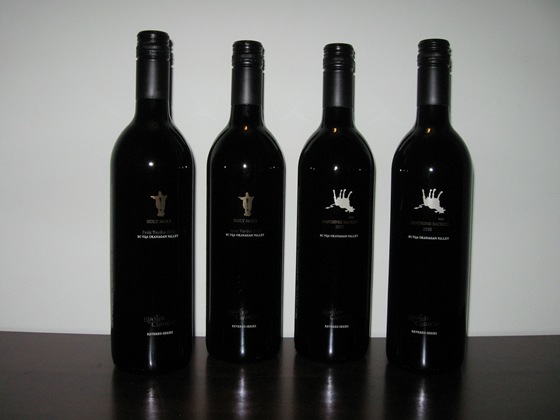 Another selection of wines to arrive this week was my semi-annual shipment from the Painted Rock Wine Club, this one containing all the brand new and upcoming 2010 reds, plus the delicious 2011 Chardonnay for good measure. Having joined the club prior to the recent website revision and club overhaul I’m very lucky to be “grandfathered” in to a custom selection of twelve bottles per year. Every July and December I typically get a six-pack of all four Painted Rock reds, and a couple of bottles of Chardonnay. This month I received the recently released 2010 Cabernet Sauvignon and 2010 Syrah, plus the 2010 Merlot and Red Icon, which won’t be released publicly until several additional months of bottle age have accrued.

The Cabernet Sauvignon will go straight into the cellar; it has “ample potential to age” according to the winery. It seems likely that 18 months in 80% new French oak is just the beginning for this wine. John Schreiner suggests the wine has 5-10 “even better years” ahead of it – an impressive prediction given how well he feels it’s drinking now, with appealing aromas and flavours of black currant, plum, cherry, and chocolate. With only 300 cases produced, this wine is in high demand from private stores and restaurants, so direct from the winery is the only place one can expect to find it priced at only $40. There simply isn’t enough available for it to join the other Painted Rock reds at winery prices on VQA Store shelves.

Painted Rock’s newly released 2010 Syrah follows a Lt. Governor’s Award for the 2009 Syrah earlier this year, not to mention a Gold medal at the 2012 Canadian Wine Awards. This wine saw 18 months in barrel as well, split 60/40 between new French and American oak. The winery suggests it presents in a Northern Rhone style, with a juicy, spicy profile rich in black pepper and dark fruit. Reviewing the Syrah at the same time as the Cabernet Sauvignon, John Schreiner felt it was deserving of 93 points, considering the disciplined elegance and long finish.

The Merlot and Red Icon are still settling down and aging in bottle at the winery before proprietor John Skinner releases them more broadly. Wine club members enjoyed advance access, but I certainly won’t be tempted to open my bottles prematurely; there’s plenty of time to let these gems come into their own. The Merlot aged for 18 months in 80% new French oak before bottling and is described by the winery as “concentrated, yet subtly perfumed” with a “dense and unctuous” palate containing silky tannin. Given the supreme pleasure I took from a bottle of 2009 Merlot recently I feel very optimistic about the 2010 (as well as the remaining bottles of 2009 I’m guarding). 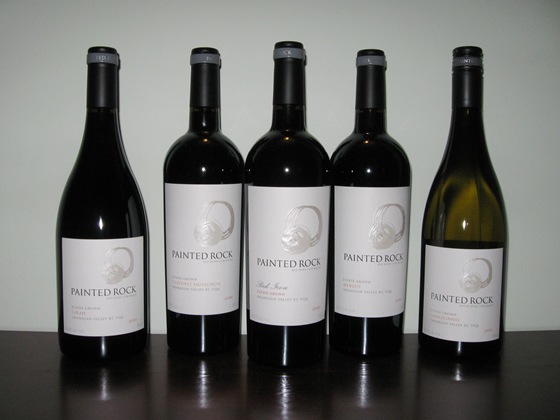 The Red Icon represents Painted Rock’s icon wine, quite literally, and the upcoming 2010 follows a (second) Lt. Governor’s Award for the 2009 vintage. For 2010, John Skinner and his winemaking consultants have returned to a more familiar Bordeaux style blend without the 1% Syrah that was added in 2009. However, as is the practice with Red Icon, the blend is far from traditional, being led for the second time by Cabernet Franc (accounting for a huge 39% of the blend). A relatively paltry 11% Cabernet Sauvignon is dominated by 18% Petit Verdot and 21% Merlot, with Malbec returning after a year’s absence to comprise 11% of the blend. Like the Merlot, the Red Icon spent 18 months in 80% new French oak. This should once again prove to be a very exciting and intriguing wine, with continued refinement from more mature vines and more detailed vineyard knowledge.

In addition to the bevy of red wines I also received two bottles of 2011 Chardonnay, which I have already thoroughly enjoyed on a number of occasions this year. The elegance and complexity of this wine comes about in part due to three distinct micro-harvests that saw the fruit fermented and aged in separate lots and then blended several months later. Liam Carrier of Icon Wines was so impressed he named Painted Rock’s Chardonnay as his 2012 Icon Wine of Year, the first white wine to achieve the accolade. I’m certainly pleased to have another two bottles to enjoy over the holidays! 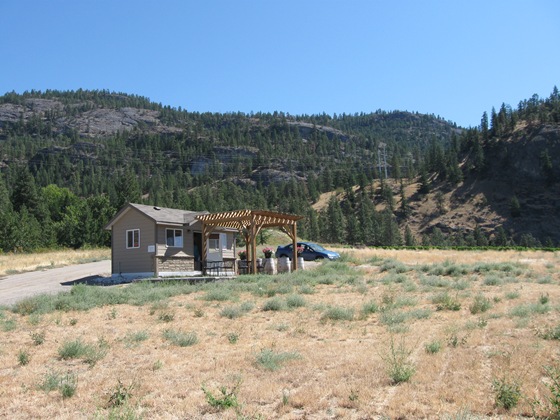 At the 2012 Canadian Wine Awards Painted Rock was once again named third-best winery in Canada, nipping at the heels of second-place finisher Nk’Mip Cellars. The Awards write-up mentions John’s ambitious plans for extensive soil-mapping this year, and he has also taken to Twitter and Facebook to share his excitement about plans for a new tasting room on the property by the summer. Considering the current charmingly-small tasting room is basically a (nicely) renovated shed it shouldn’t really be considered a new room, as there isn’t much to replace, per say. For the past several years John has funnelled all his efforts (and profits) directly into the vineyard and winery, and it shows in the wines’ spectacular accolades and commercial success. His uncompromising approach is what makes Painted Rock one of the very few wineries from which I would happily purchase anything on offer with full confidence. I’m already looking forward to my next wine club shipment!